Unexplained bangs and crashes haunt guests on a Dusk Till Dawn ghost hunt as they tried to uncover the paranormal history of the abandoned Victorian courts in West Bromwich. 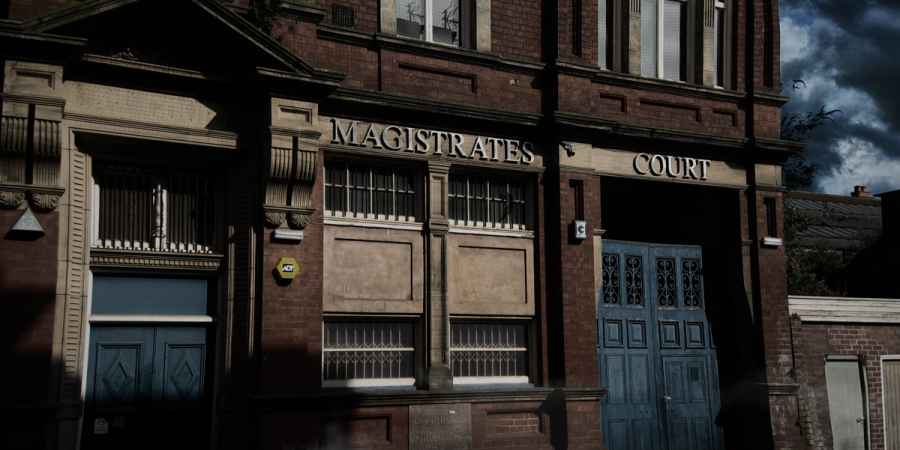 What better way to get into the spirit of Halloween than with an October ghost hunt in a derelict court room. With just over week until the big night, I joined the paranormal events company Dusk Till Dawn and their guests for a ghost hunt in the West Midlands.
I arrived at the former West Bromwich Magistrates Court building in Lombard Street West at dusk and was greeted by a member of the team, who showed us into the decaying building that was deceivingly small from the outside. I'd never been on an event hosted by Dusk Till Dawn before and picked this one based on the location, which I knew nothing about.
The event started as anyone who's been on a ghost hunt before would expect, with a welcome briefing, conducted by the team in the only lit room in the building. Our hosts Jess, Rob, Steve and Jenny welcomed us to the location and gave us an idea of what to expect from the night. The briefing, which had a good balance of useful information and humour, gave us a feel for the team and what lay ahead of us.
The talk included the usual health and safety advice, and we were assured that the night was going to be a genuine investigation with no tricks or fakery - as you'd expect. We were also encouraged to go into it with an open mind and positive attitude, "the more you put into it, the more you're going to get out."
One slightly unusual thing that Steve said to us during the welcome talk was "we're not ghost hunting, we're actually spirit hunting." He explained that ghosts are replays of the past, often repeating actions they performed in life. Steve continued, "we can't communicate with them and they can't communicate with us." However he says, "spirits on the other hand, we can."
Even if you take these definitions as fact, hauntings can be the result of a ghost, a spirit, a poltergeist, a demon and countless other subcategories of supernatural entities. I'd be more than happy to see any of these in the form of an apparition at a haunted location on an event. In fact I'd rather have the experience of seeing a ghost than communicating with an unseen spirit.
The truth is, there's no concrete evidence or agreed upon explanation of what a ghost actually is. A ghost is said to be a visible apparition of a dead person, a spirit is defined as the non-physical character or soul of a person. But there are countless stories of people communicating with visible apparitions. On the other hand, how do we know that a spirit isn't just a ghost that doesn't have the energy to manifest or that the voices of spirits heard through ghost hunting gadgets aren't just repeating replays of the past? We don't know, no one knows.
The team also ran us through their impressive array of ghost hunting gadgets, many of which I'd never seen on public events before. As well as more common gadgets like flashing cat balls, temperature guns and several types of electromagnetic radiation detectors, they also had a geophone which reacts to vibration, plus a motion activated music box and a teddy bear that lights up if anything gets close to it. 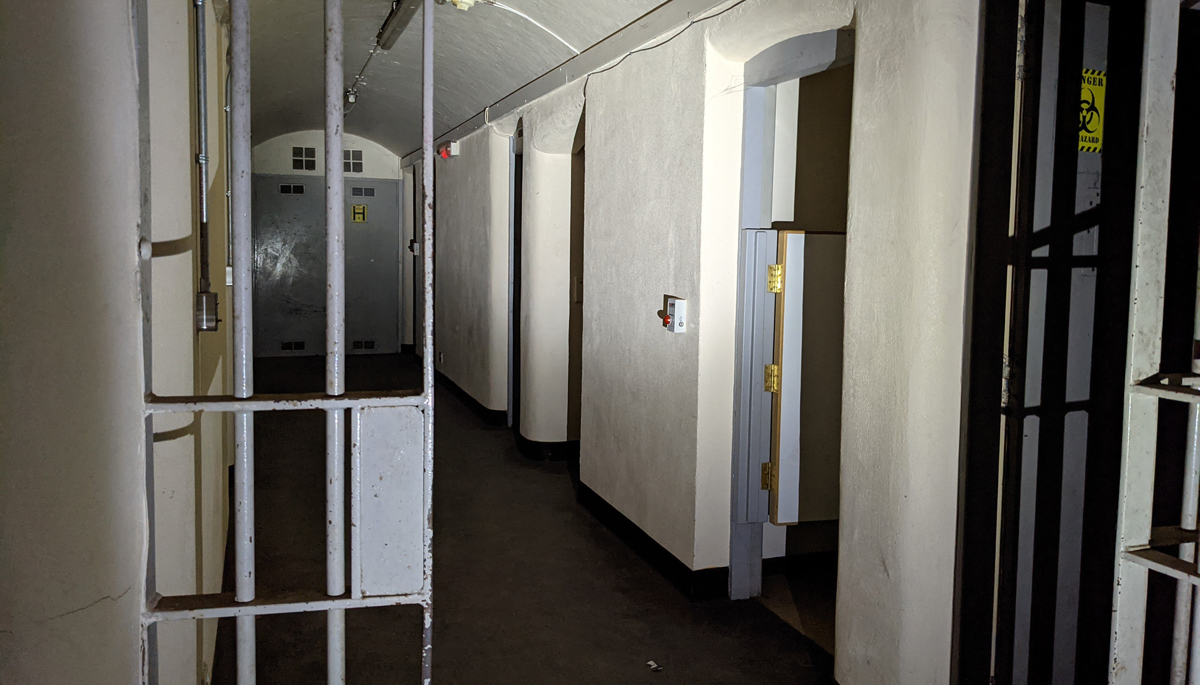 Not long after walking into the building, which dates back to 1890, it became clear that I'd made a good choice when it came to booking on to a ghost hunt at this location. Although the two-storey red brick building doesn't look overly impressive from the outside, inside was a different matter. The building consists of three main court rooms, one of which was especially impressive, as well as countless abandoned offices and rooms off of the confusing layout of dark corridors.
Since closing as part of a reduction in courts across England and Wales in 2011, the Grade II listed building has been left vacant and has fallen into a state of disrepair. While it's sad to see a historic building in this sort of condition, it does add to the atmosphere of a ghost hunt and with so many areas to explore, including the subterranean holding cells, I couldn't wait to get started.
With life changing judgements being passed in this building for over a hundred years, and the accused being locked up in dark cells awaiting their fate, it's no surprise that the courts have a sinister atmosphere and a haunted reputation. Dark shadow figures have been seen, objects have been thrown in the darkness, and visitors have reported being touched by unseen hands.
We started our ghost hunt as a group, the four team leaders and about 40 guests. The night began with a circle of protection, this involved all the guests standing in a circle in the darkness and going through a visualisation exercise led by Jess. The idea of this is to give you some spiritual grounding, protect you from negativity and make you more visible to supernatural entities. This was a nice way to start and offered a bit of a disconnect from the real world and a chance to relax into our surroundings.
After this we got our first taster of just how big the building is as we were shown around to some of the key areas. The building was of course in total darkness and upon arrival in each of the rooms we turned our torches off as the organisers expertly and confidently called out to any spirits that might be present and encouraged them to knock, bang, move something or otherwise make their presence known.
Things started out slowly in an office room at the back of the building. We then moved on to the very grand courtroom 1 at the front of the building, where unfortunately anything potentially paranormal was drowned out by loud music from the building across the street. Next we moved on to the much smaller courtroom 3, where several guests saw strange unexplained flashes of light, and curiously at one moment I felt the floor beneath me vibrate despite the fact no one was moving around. We ended the first half of the night in the cold and dark cells below the building, which proved to be calm and quiet... for now. 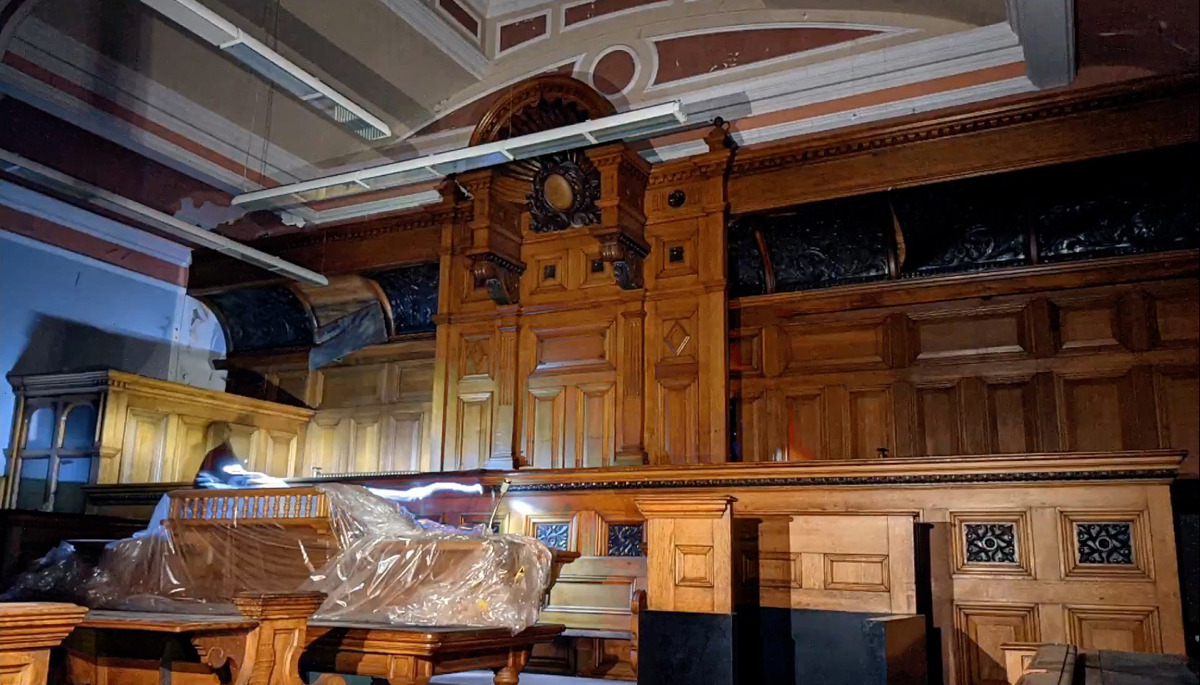 After a quick break the guests were split into groups. My group first headed to courtroom 1, where luckily the party across the road had finished. This is an imposing and ornate wood-panelled room with a more modern bullet-proof glass box which serves as a completely impenetrable dock where the defendants would have once stood during their trial. From within this glass cage stairs lead directly down to the cells below.
It was here that things started to get interesting and bizarrely it seemed to be focussed on one particular guest, a girl name Ellie. We all took it in turns calling out, but every time Ellie spoke something happened. Either a cat ball flashed, a ghost hunting gadget triggered or most interestingly a noise was heard from the back corner of the room.
After hearing this a few times, me being me, I went to stand in the corner where the sound was coming from to try to pin point the source of the sound. I didn't have to wait long. I was stood in the corner alone, just in front of the wall and moments later I was startled by the same sound coming from right behind my back. I didn't stay there much longer after that, but it sounded like the sound was coming from inside the wall.
As things were starting to get interesting, there was then a bit of a change of direction and we switched doing Ouija boards and table tipping. The event and its host were flexible enough to let anyone not interested in taking part sit out these activities, which I did and instead continued to focus my attention on the darkness in that back corner of the room where the sound had come from, but it seemed that without Ellie's encouragement it fell silent. 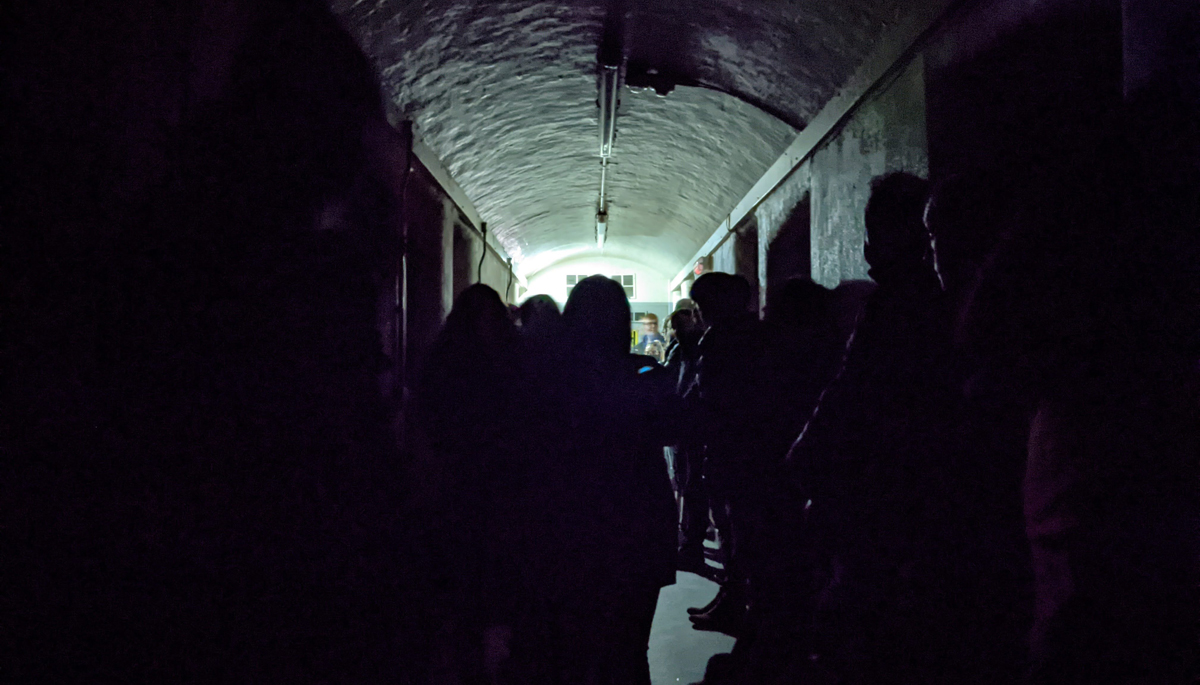 The last vigil of the night took place in the cells, which isn't a huge area, but as it's underground it's very dark, cold and eerie. The heavy metal doors of the cells open on to a single corridor with a thick barred gate at one end.
The highlight of this vigil was when a loud metallic crash was heard. It sounded like the gate in the corridor slamming, but that one didn't move and it sounded more distant. There was a similar gate elsewhere in the building and one outside where the prisoners would have once been brought into the cells, so one of these could be responsible for the sound, but what caused it to crash remains a mystery.
What made this moment even more interesting was that at the exact same moment that the crash was heard, one of the team's ghost hunting gadgets, a geophone, started beeping loudly. The fact the device triggered means that there was some kind of ground movement or vibration through the floor. The event was so sudden, loud and violent that I swore - probably for the first time on a ghost hunt.

West Bromwich Magistrates Courts was a great building to investigate that delivered more scares than any other ghost hunt I have been on, and it's very unusual for me to get scared on an investigation. But can you blame me when one of the sounds of note was right behind my back and another was very loud?
Dusk Till Dawn were a great team to experience this location with, the six-hour event was well-organised, professional and good fun. I'd like to say a big thanks to Jess, Rob, Steve and Jenny for making it such a fun night and to all the other guests for being good sports and getting involved.
You can book your own ghost hunt at the Victorian Courts Of Justice with Dusk Till Dawn, find out more here.
Tags:
ghost huntsdusk till dawmparanormal