A night hunting the ghosts that haunt the historic and eerie Guy's Cliffe House in Warwick with television ghost hunter and star of 'Most Haunted', Yvette Fielding. 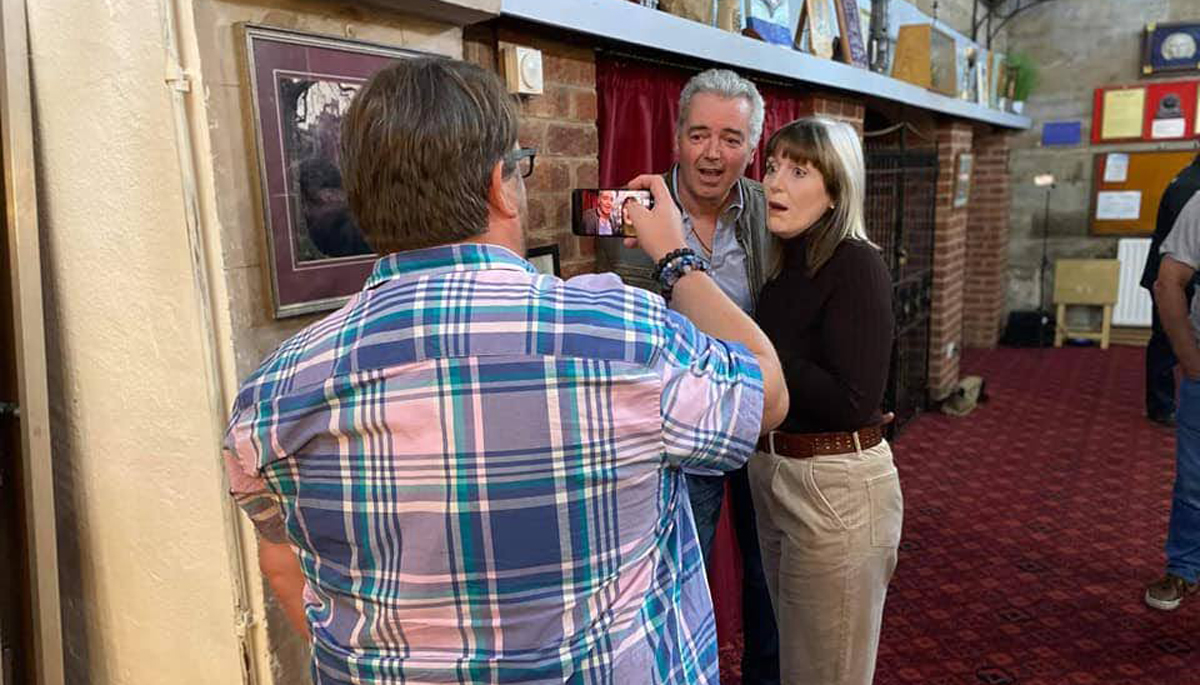 Love or loathe 'Most Haunted', there's no denying that the long-running British show defined a genre and paved the way for a generation of ghost hunters who followed in its wake. Setting these paranormal trends was "scream queen," Yvette Fielding and her team of ghost hunters.
I'm often out ghost hunting at the weekend on various public events, including those hosted by Most Haunted Experience (MHE), the show's spin-off events company. Their events are often attended by stars of the show including Karl Beattie, Stuart Torevell, Glen Hunt and Fred Batt, but of course the most popular are those that Yvette herself is at.
When I saw some last minute tickets available for a night at Guy's Cliffe House with Yvette, I booked up so I could experience a ghost hunt with Yvette for myself. So on Saturday night, I headed to Warwickshire where I drove up the long driveway of the grade II listed building where I'd spend the next four hours on the hunt for spooks.
As I neared the carpark at the top of the drive, the first thing I saw was the ruinous manor house that dates back to 1751, fell in to disrepair in the 1950s. Guy's Cliffe House gets its name from the legendary Guy of Warwick who's believed to have lived in a cave carved into the sandstone cliff that the house was built on.
Behind the ruins is the adjoining 15th century St Mary's Chapel, which was passed into private hands after King Henry VIII disbanded monasteries, priories, convents and friaries in the UK. In the 1970s, the chapel was restored by the Freemasons, who still hold their secretive rituals in the building's two temples.
We were greeted at the property by MHE's friendly staff who showed us into a large meeting room in the chapel. There were around thirty of us in total, all members of the public and a good mix of experienced ghost hunters and first-timers, who were full of energy, enthusiastic and willing to participate.
"Thank you all so much for coming, it's lovely to see you all," said Yvette as she welcomed us to the location and gave a brief introduction. She continued, "I'm really excited because every time we come here we get some fantastic phenomena." In a 2019 episode of the show filmed here, a table was seen to levitate during a séance.
For this event, Yvette was joined by her husband and fellow on-screen investigator, Karl, and long-time team member, Stuart. The television ghost hunters would be making their way through the building through out the night, joining guests for vigils in some of the building's most active areas. 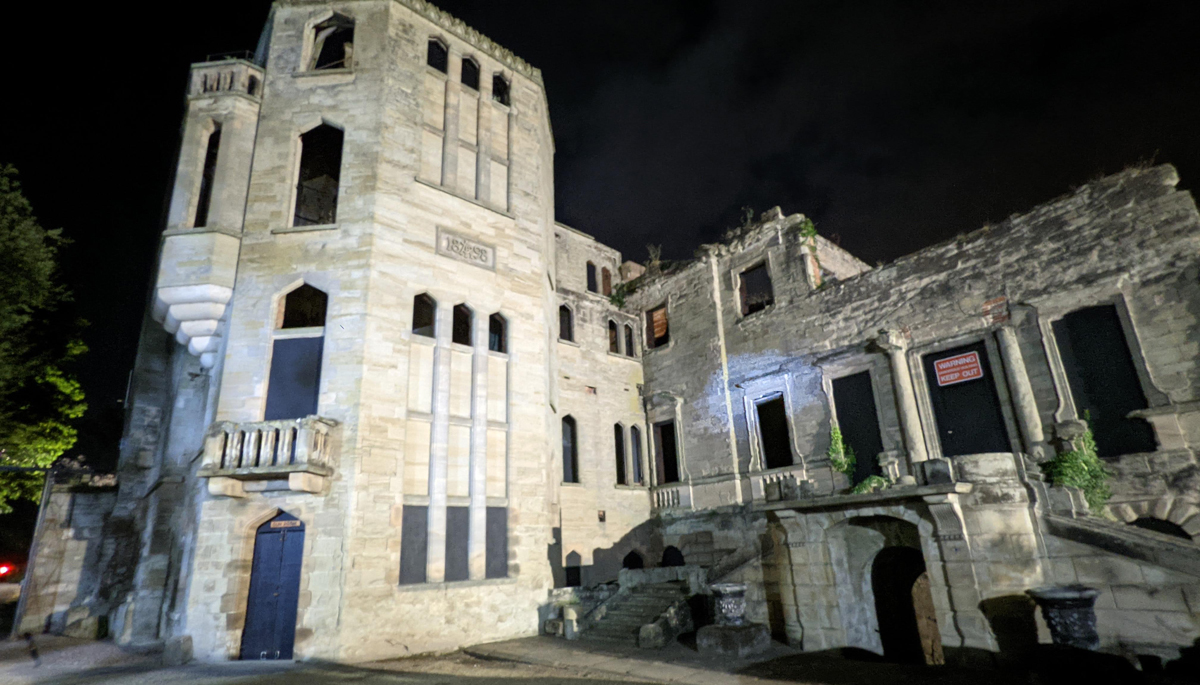 Guy's Cliffe House has everything you could want from a haunted house - a dungeon, winding stair cases, creepy cellars, towering ruins, an imposing clock tower and the meeting place of a secret society. Previous visitors have reported making contact with the spirits of Freemasons, children, and servants from the house. Most of the spirits are said to be male as historically the site is quite male dominated.
Throughout the property dark shadows are seen moving, whining voices are heard and poltergeist activity is common. A white figure is often seen walking the grounds in a state of distress, she's believed to be the ghost of Guy's wife Lady Felice, who killed herself in a dramatic fashion. It said she jumped from the top of the building and died on the ground in front of the cave below the house where Guy lived the last few years of his life as a hermit. 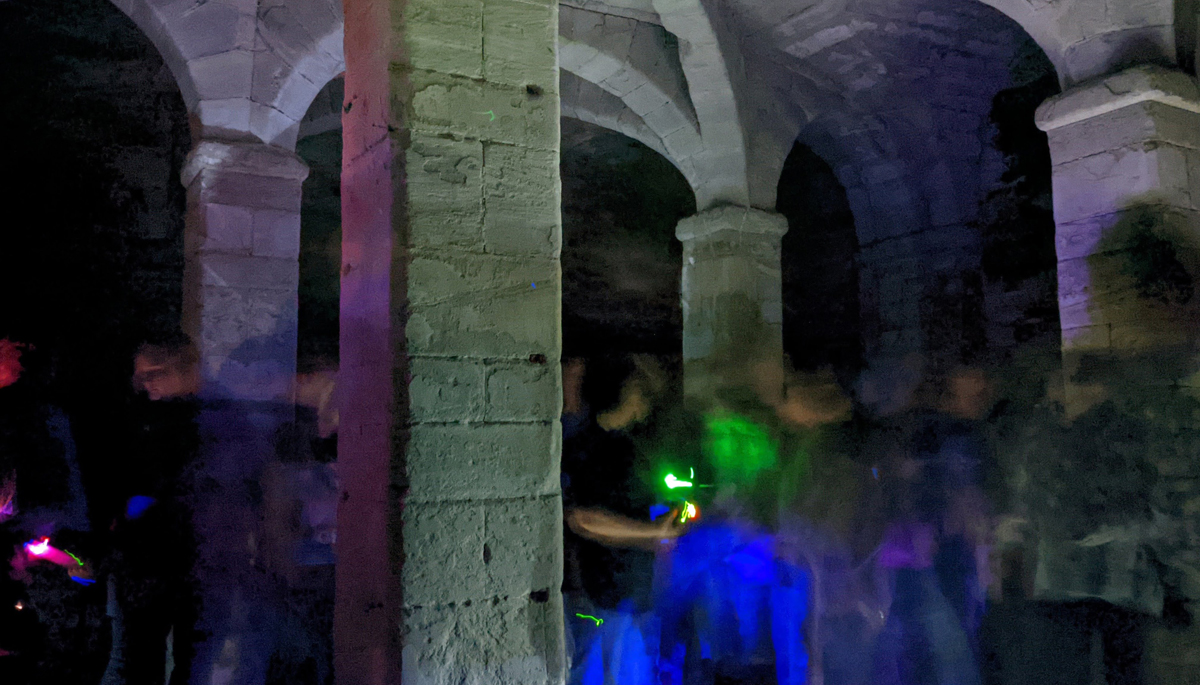 We were split into two groups as we headed out into different areas of the house to carryout vigils. Our group went to the coachhouse first. We had a few creepy moments here, including unexplained knocks and bangs, the sound of something falling or being thrown in the darkness and various ghost hunting gadgets placed around the stable by the team triggering and lighting up.
Unusually for me, I had a bit of a scary moment in a dark corner of the coachhouse that I'd ventured into alone. The area felt very oppressive, perhaps it was all in my head, but I did get quite freaked out. What made the area especially creepy was that a life-sized ghostly figure had been dumped in this area for storage. Standing near it in the dark I thought to myself, "if I was a ghost and I wanted to scare people, I'd use the mannequin." No sooner had I thought that, the light that was coming from a single torch somewhere in the room changed and it almost looked like the creepy mannequin turned its head.
A little while later in the same area, I thought I heard a growl coming from the darkness of the far corner of this area. Was it my ears playing tricks on me? I went to say something to the friend I was with, but stopped myself mid-sentence. I think she could tell something was up, asking "are you okay?" After being asked a second time I sheepishly confessed that I thought I heard a growl.
After this we moved on to the wine cellar, a small chamber at the end of a long tunnel underneath the stables. It was here in the 'Most Haunted' episode shot here that a large piece of masonry was thrown into the tunnel, while the show's resident demonologist, Fred, was investigating it with Stuart and camera man Gregg Smith.
As is often the case on any investigation, this area proved to be a little quiet so we moved on to the basement of the chapel, the former servants' quarters. Here we were joined by Yvette, Karl and Stuart. 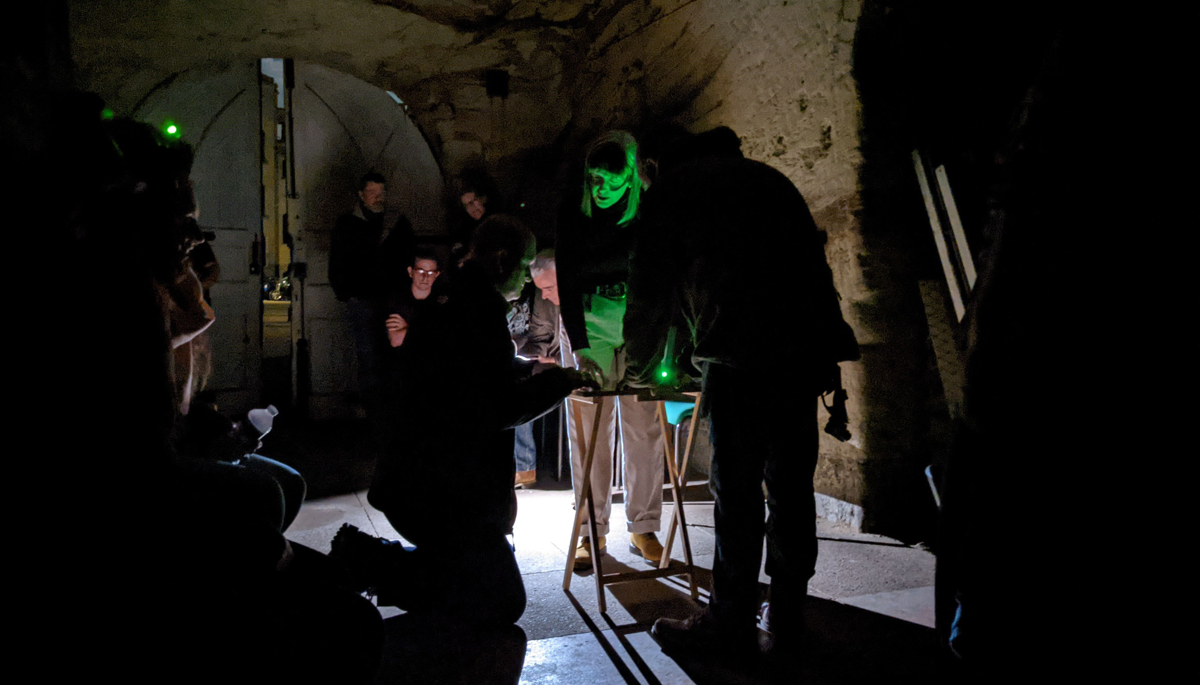 In the basement the guests formed a large circle for the next vigil, which Yvette and Karl lead. Karl called out, "if you're here, we know you are - people have seen you and witnessed you - show yourself to us. We just want to communicate with you, and hope that you will want to communicate with us and tell us your story."
But despite their best efforts, including some French language calls to the spirits and a little help from the guests, the basement failed to show its spooky side. Then someone mentioned that something was thrown in our first location, the coachhouse, and Yvette excitedly said, "ooh, why don't we go back in there?" So we did.
Once back in the coachhouse, Karl suggested conducting a table tipping experiment. A group of guests gathered around a rickety table and each placed a finger lightly on the table top. The idea of table tipping is similar to that of a ouija board, it's a method of spirit communication, but rather than sliding a glass around a board the aim is to encourage the spirits to rock or move the table.
It was a great experience for the guests to get the chance to try some table tipping with Yvette and Stuart, who took over and called out in his usual incredibly precise and detailed fashion. The table rocked and creaked a little, and vibrated under the team's hands, but they didn't get any impressive movement on this occasion despite their best efforts to encourage the spirits to play.
However, during the table session we did hear some clear yet unexplained whistling sounds, and it wan't long before Yvette was inexplicably drawn towards the same dark corner of the stable that I'd felt uncomfortable in earlier. As soon as she entered the area, she said, "there's something horrible in here. There' something here."
Yvette became quite uncomfortable as a chill fell over the space, she said "I want to cry, I'm shaking. Something happened here." Moments later dull thuds could be heard coming from the stone walls, which seemed to be in response to Yvette's calls.
After a while the negative feeling seemed to pass, the atmosphere changed and the activity, although minimal to start with, died down. 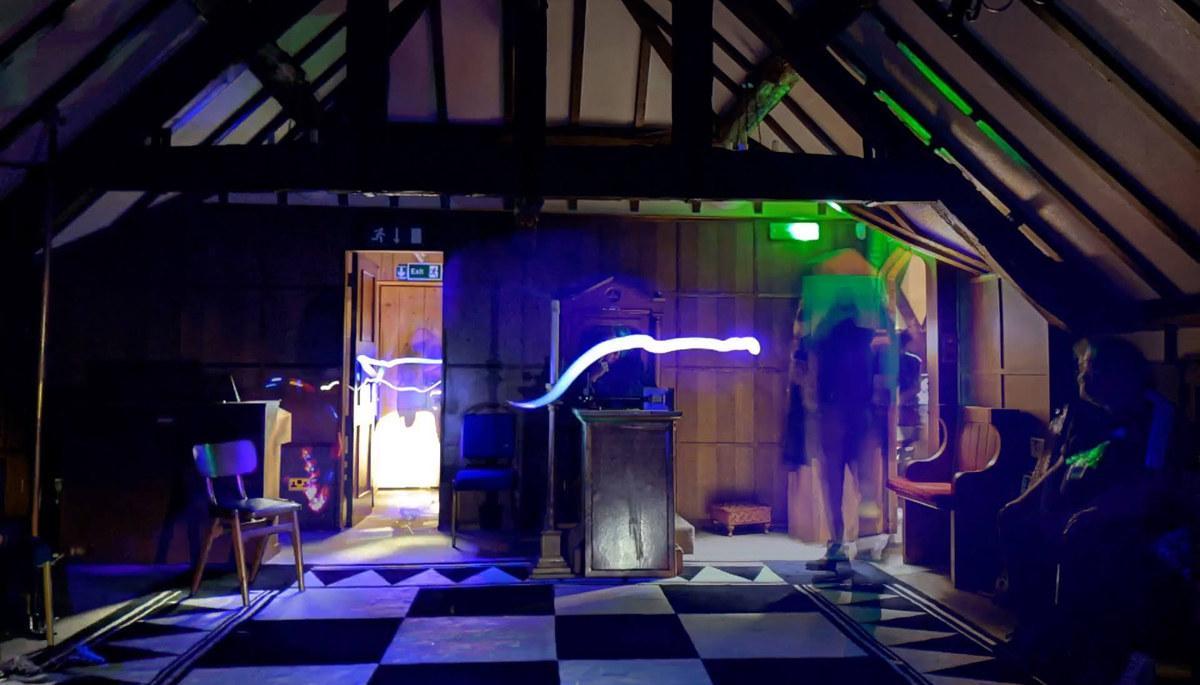 After a break - a chance to recharge and refresh with a snack and a hot drink - we headed back out into the building. We spent the rest of the night investigating the parts of the building now used by the Freemasons. This included two Masonic temples, one of which is on the ground floor of the former chapel and has a large statue of Guy of Warwick adorning one of the walls.
We tried a few methods for the final hour or so, including séances, watch and wait sessions, and used plenty of ghost hunting devices which were scattered around the room. One type of tool used were some cat toys. Cat toys may seem out of place at a ghost hunt, but they're actually really effective. The toys being used were little balls which lit up and flashed when they were moved, which did happen on several occasions.

Book Your Own Ghost Hunt At Guy's Cliffe House

MHE's ghost hunting event at Guy's Cliffe was a fun experience, perhaps made better than others because the energy of the guests felt so high. I don't know if it was just luck of the draw and people were in a good mood, or if having Yvette in attendance lift people's spirits, but there was a lot of positive energy, enthusiasm and willingness to get involved, which really helps at these sorts of events.
The team leaders were friendly, professional and very accommodating of guests' suggestions, fears and beliefs. My thanks go out to Jenny and her team for running the event, all the other guests for being good sports and getting stuck in, and of course the night's VIPs, Yvette, Karl and Stuart.
If you'd like to book your own ghost hunt with Most Haunted Experience, you can find more information at mosthauntedexperience.com.
Add A Comment
Tags:
ghost huntsguys cliffe housemost hauntedmost haunted experienceparanormal