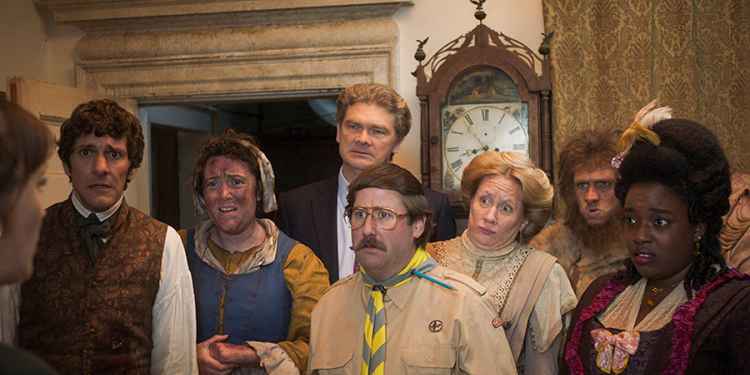 The BBC takes viewers back to Button House for a second series of the British comedy series, 'Ghosts', which lands on BBC One and iPlayer just in time for Halloween.
The supernatural comedy series, which is packed full of in-jokes that fans of the paranormal will love, makes its comeback on September 21. The six new episodes will air on Monday nights up until the week of Halloween.
The series follows a young, cash-strapped couple, Alison (Charlotte Ritchie) and Mike (Kiell Smith-Bynoe), who unexpectedly inherit a dilapidated country house, which as they learn is packed full of numerous restless spirits who have died there over the centuries.
Each of the resident ghosts is very much a product of their time, resigned to squabbling with each other for eternity over the most inane of daily gripes.
The first series aired on BBC One last year and went on to become the highest rated British comedy TV series of 2019. Due to this success, the Beeb confirmed a second series was in production, and filming started in early-2020.
The cast said, "we were thrilled with how warmly series one was received and can't wait to creak open the doors of Button House again and share another clutch of ghost stories."
The series touches on the common paranormal tropes of residual hauntings, poltergeist activity, unfinished business and lots of common haunting phenomenon. The series also plays on a question that's commonly asked in the paranormal community, why do we never see the ghost of cavemen?
'Ghosts' returns on Monday, September 21. The first series is available to watch now on BBC iPlayer.

We are so proud of this series and can't wait for you all to see it! #bbcGhosts pic.twitter.com/jWNSIFwbh9