The Ghosts Of Gwrych Castle That Might Haunt This Year's 'I'm A Celebrity... Get Me Out of Here!' Contestants 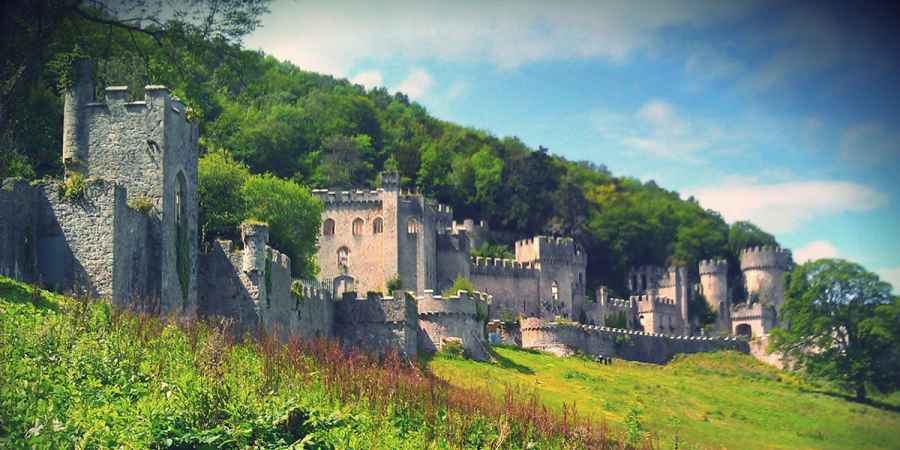 Photo: © Robin Parker
Contestants in this year's 'I'm A Celebrity... Get Me Out of Here!' should be less concerned about spiders and other creepy-crawlies and be more worried about rats, leeches and medieval torture chambers.
ITV has confirmed that the long-running reality show will be swapping the jungle of New South Wales for the ruined Gwrych Castle in North Wales.
The move is due to the global coronavirus pandemic, which has made it impossible for producers to plan an overseas series as normal, but we think the move to an atmospheric British location could be a positive one for the show, which first aired in 2002.
The celebrities taking part in the upcoming series have not yet been announced, but it's not just the tough challenges they should be worried about when the show relocates from Australia later this year. For some of the celebs the long-standing rumours that the castle is notoriously haunted will be more concerning.
ITV confirmed they'll be moving the show to the castle near Abergele, Conwy in a deal that will reportedly bring a much-needed £1 million to the castle's preservation trust. Gwrych Castle means "Hedge Castle" in Welsh. It was built between 1812 and 1822 and is set amongst 250 acres of grounds overlooking the Irish Sea. 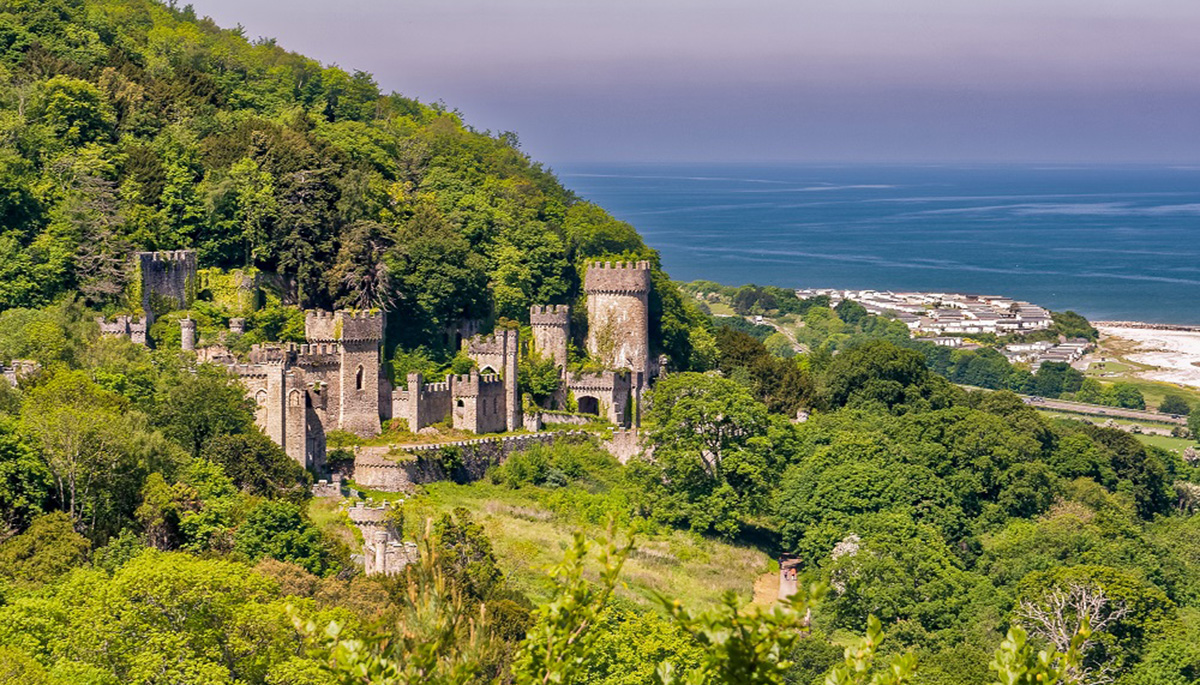 Photo: © Ognyan Petrov
According to local paranormal investigators and the castle's staff, the ruins are definitely haunted. A duty manager getting ready to lock up for the night said he was terrified by unexplained sounds in the 200-year-old derelict castle, "I heard the chain on the main gates rattle slightly and then the footsteps began to advance towards me. It was pitch black on the Main Terrace, and I was waiting for the electrician to finish in another part of the castle so I could lock up. The footsteps grew closer and closer... and then came to a dead stop about a foot in front of me. Barely able to take a breath, I got out my phone and flashed its torch, but there was nobody there."
The castle's most famous ghost is believed to be the spirit of a former owner, the Countess of Dundonald. Some say that she was buried in unconsecrated ground and has come back to haunt her husband after he took all of her valuables. Staff and visitors to the castle have reported seeing her in the form of a floating apparition wearing a white dress, most frequently in the Countess's Tower, which is said to be one of the most paranormally active parts of the ruins.
As well as regular sightings going back as far as the 1950s, the White Woman may have also been caught on camera in a photo taken by a businessman who was visiting the castle in 2010 with a view to buying it. The photo shows the pale figure wearing a white dress looking out of a window. What makes the photo so creepy is that the floorboards had rotted away in the area the figure is stood in, the banqueting hall, making it impossible for a living person to be standing there.
The castle is also allegedly haunted by a Lady in Red who is said to have been killed during a fox hunt, and the spirit of a servant girl who died following an accident while horse riding in the grounds.
The presence of a former caretakers, gamekeeper, dairy maid and other household staff have also been reported, and in certain parts of the grounds dogs are often spooked and refuse to go any further.
Gwrych Castle is said to be so haunted that it even hosts regular ghost hunting nights for members of the public to try their hand at paranormal investigation. However, these events are currently on hold as the castle is closed to the public until the new year due to the filming. 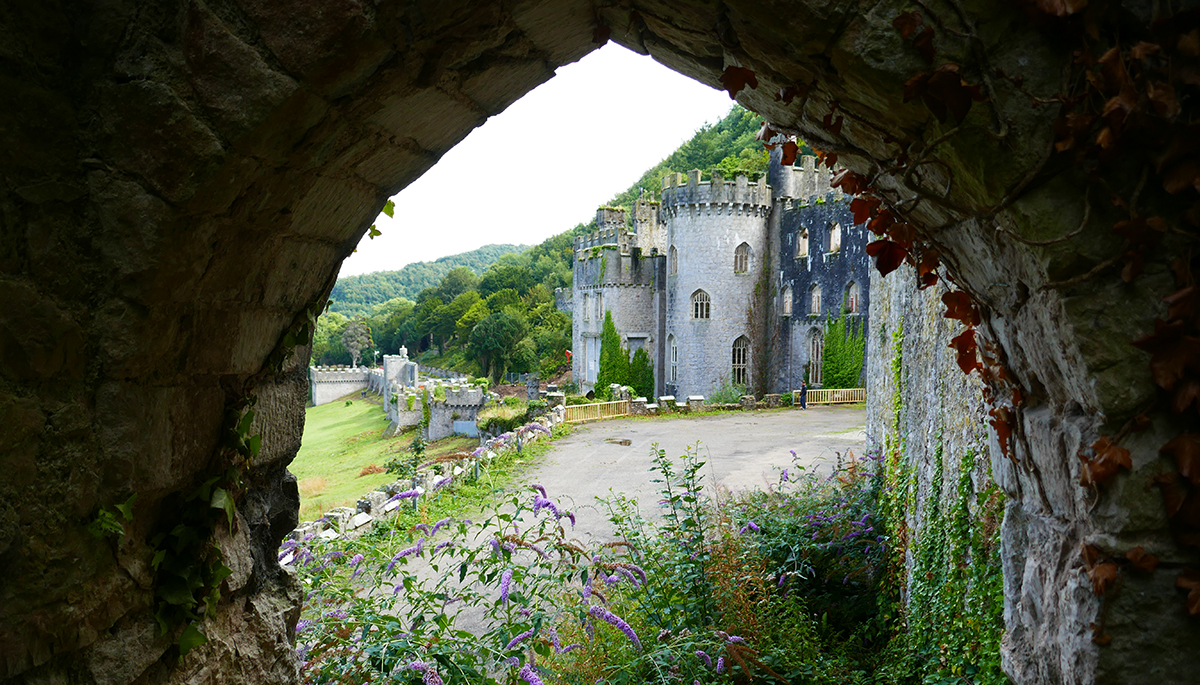 Photo: © Zoltan sos
It's not just the spooks that the contestants of the ITV show will have to worry about when it returns later this year. Having fallen into a state of disrepair, most of the castle is open to the elements, which means it could be a harsh environment for the celebs given the freezing Welsh climate in late-Autumn when the show airs.
Ant and Dec will return as hosts of the series as always, but with a change of scenery the show could take on a much different feel. Instead of tasks like the famous bush tucker trials featuring jungle critters, this year the challenges are likely to be more in keeping with a medieval castle. So expect rats, dungeons, gallows, stocks and perhaps a trip to the crypt where an ordeal in a coffin might await the campmates.
It possible that the show's producers may also play on the castle's haunted reputation and design some fittingly spooky challenges. Past series of the show have started in mid-November, but given the colder conditions in the UK and the castle's spooky connections, could we see a Halloween launch for this year's show?
The aim of the trials and challenges is to win food for the camp, or perhaps even a medieval banquet fit for a king. After all, one eventual winner will go on to be crowned the king or queen of the castle, instead of the jungle as normal.
Veteran radio disc jockey Tony Blackburn was crowned king of the jungle in the show's first series. Another former 'I'm A Celeb' contestant who might feel right at home in the haunted castle is Yvette Fielding.
The television ghost hunter and host of the long-running paranormal series 'Most Haunted' appeared in the 15th series of 'I'm A Celeb' in 2015, finishing in tenth place after being evicted on 30 November.
Of course, we don't yet know which celebrities will feature in the 2020 series and there's no clues of an official start date, but with all the attention the show is currently getting from its change of location, it could be the biggest series yet. The launch night of last year's series was ITV's most watch programme of 2019, pulling in more than 13 million viewers.
Add A Comment
Tags:
paranormaltelevisiontopicalwalesim a celeb