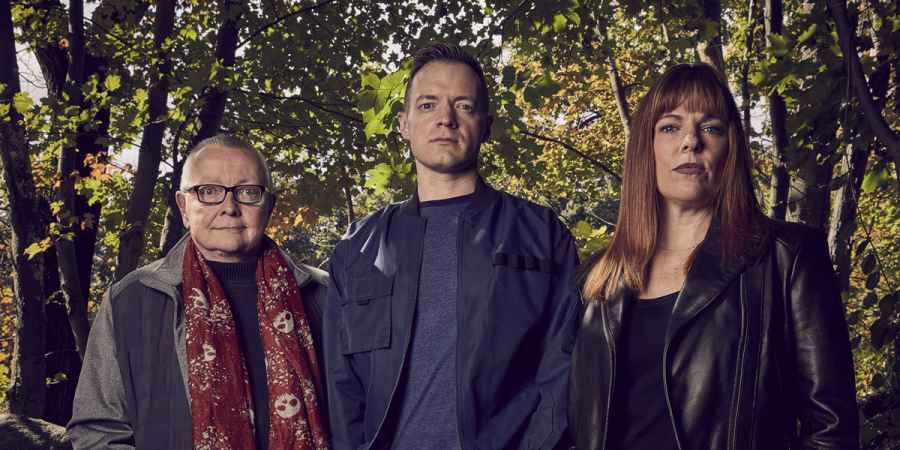 Photo: © Discovery+
Paranormal investigators Amy Bruni, Adam Berry and psychic medium Chip Coffey return to the US Travel Channel and Discovery+ with 10 new hour-long episodes of 'Kindred Spirits' in 2023.
The new season premieres on Friday, January 20 and see the intrepid investigators help people who are tormented by the dead by settling spirit activity, capturing evidence and bringing closure to each location they visit.
Utilizing several tools to communicate with spirits, Bruni, Berry and Coffey will discover shocking stories by visiting some of America’s most haunted homes and historic sites. During their emotional and terrifying investigations, this all-star paranormal team captures evidence, settles spirit activity and brings closure to each location they visit.
In the season premiere, the investigators travel to Greene County Historical Society and Museum, a former poorhouse in Pennsylvania. For nearly 100 years, the institution was said to be a safe haven for the impoverished and disenfranchised. But, in reality, it was run more like an asylum. In the 1890s, a cruel and sadistic overseer named William B. Cage took over the institution. He was known to beat the inmates and he was even accused of chaining individuals in the basement rooms where he allowed them to starve as punishment for minor infractions.
Interestingly, all of the inmates who made these reports disappeared from the records. Were they sent away, did they move or were they permanently silenced by Cage is uncertain. When the knowledge became public, Cage was removed. In 1968, the facility reopened and became a cultural center. Today, employees and guests report unexplained footsteps and many have witnessed full-bodied apparitions.
Does William Cage or troubled inmates still walk the halls? Bruni, Berry and Coffey investigate multiple locations on the site, including the basement where shackles can still be seen, in hopes of resolving the pains of the past.

Episode 1: Broken Spirits
Premieres January 20
Bruni, Berry and Coffey visit a former poorhouse in Waynesburg, Pennsylvania, where rumors of torture tarnish an already dreadful history. The facility is now a cultural center, but intense paranormal activity terrifies employees and guests. Can the team rectify the horrors of the past and bring peace to this haunted place?
Episode 2: What Lies Below
Premieres January 27
Bruni, Berry and Coffey are called to the haunted town of Palmyra, New York, to investigate aggressive paranormal activity at a museum. Has a recent fire triggered a family of spirits? Or is the ghost of a barbaric doctor behind the haunting?
Episode 3: Beware the Occult
Premieres February 3
Bruni, Berry and Coffey undertake a case of biblical proportions when a distressed widow calls for help after an explosion of paranormal activity in her home in Pittsburgh, Pennsylvania. Are spirits attached to an old family bible, or is her late husband to blame for the haunting?
Episode 4: Ghost Ships
Premieres February 10
Bruni, Berry and Coffey investigate a freighter that once sailed the Great Lakes and now serves as a floating museum in Sault Ste. Marie, Michigan. Something lurks onboard the massive ship, and it's becoming more aggressive. Could the ghostly activity be tied to artifacts from one of the worst shipwrecks in American history?
Episode 5: The Angry Ghost
Premieres February 17
Bruni, Berry and Coffey answer a desperate family's plea for help in Albion, New York. Dark apparitions are showing extreme aggression in their home, scratching and attacking all who live there. Can the team get to the bottom of who is haunting the house?
Episode 6: Ghost Wars
Premieres February 24
Bruni, Berry and Coffey go to Providence, Rhode Island, to investigate a haunted library that began displaying paranormal activity decades ago. Books fly from shelves, objects launch off desks and names are called out in the night. The spirits seem angry, but why?
Episode 7: Living With the Dead
Premieres March 3
Bruni, Berry and Coffey rush to Raynham, Massachusetts, to help a family in need. An aggressive spirit lives in their home and will not leave them alone. The haunting is so bad that they've sealed off part of the house to contain it. Can the team find answers before it's too late?
Episode 8: Shadow in the Night
Premieres March 10
Bruni, Berry and Coffey help a mother and her children who are haunted by a terrifying shadow figure. The family fears it might have entered their home in Bellefonte, Pennsylvania, through a portal, but could the entity be tied to a nearby penitentiary? The team is determined to find out.
Episode 9: The Undertaker's Return
Premieres March 17
Bruni, Berry and Coffey embark on a horrifying case in world-famous Gettysburg, Pennsylvania. They investigate a home haunted by an eerie shrouded figure that seems to have an obsession with the caretaker. Who is this spirit? And is the caretaker safe?
Episode 10: The Country Club Murders
Premieres March 24
Bruni, Berry and Coffey visit a country club in Beckley, West Virginia, notorious for an unsolved double homicide on a secluded lovers' lane. Do the murdered lovebirds now haunt the halls of this grand establishment? Or is there something more sinister at play?
Tags:
televisionparanormalkindred spiritstopical