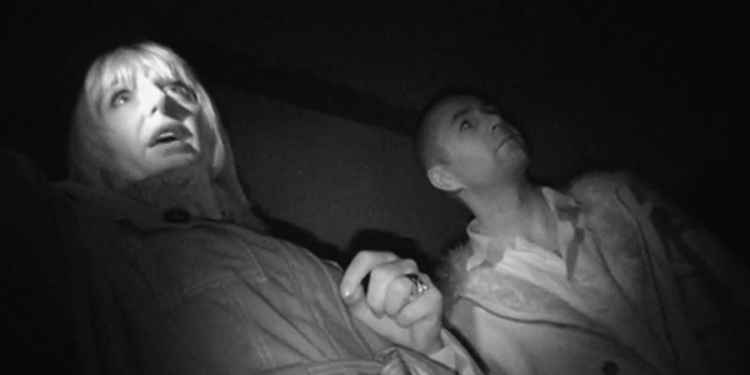 Yvette Fielding and the rest of the Most Haunted crew head to a sheltered valley in Gloucestershire to a house, which has been linked to royalty, witchcraft and poltergeists.
The Owlpen estate had a recorded history of a thousand years, the land and house was owned by the Owlpens 1100 to 1462. Eventually it was handed over to the Daunt family through marriage and remained with them until Thomas Daunt VII died in 1803.

The house then fell into a half dilapidated state and became overrun with ivy. The manor was saved in 1867 and again it went through many changes. Its history connects it with a number of old families, talented artists, writers and famous visitors including royalty. Something else that has give the manor noterietay is a ghostly picture taken in 2003 by the owners, which shows a strange figure in one of the upstairs windows.
In one of the bedrooms known as the Queen's Room, three separate ghostly entities have been seen, a grey lady, a tall elegantly dressed woman and Queen Margaret of Anjou, wife of Henry VI.
The figure of a large hooded man has been seen throughout the building, especially in the East Wing bedroom. It's said he is the tortured soul of a monk, who was walled up and starved to death during the reformation.
The show's resident historian, Richard Felix said, "in 1100 when this place was first built, there is a report of a man that became a Benedictine monk just before he died. So, there is a possibility that that man that dressed as a Benedictine could still haunt the place to this day."
The attic is supposed to be haunted by the second Thomas Daunt, a wizard and an alchemist. Since his death, it's been said he haunts this very spot. There's also been a mischievous seen and heard running up and down the back stairwell.
Richard added, "with so many people living and dying on this site for over 1,200 years the amount of energy, the amount emotion, pain, terror, I'm pretty sure that a place like this has got to have more than its fair share of ghosts."
Before the investigation Yvette asked the show's regular paranormal researcher, Phil Whyman, if he thought anything would happen tonight. Phil said, "at this moment in time you're asking that question, I'd say not an awful lot is going to happen tonight, but this being Most Haunted we have had unexpected things happening in places we wouldn't have expected to have."
Yvette and the team have one night to find out, so they wasted no time in getting stuck into their investigation with the show's spiritualist medium, Derek Acorah, starting in the Oak Parlour.
He first picked up on the essence of a female spirit, who in life grieved the life of her son who was taken away from her and murdered, this turned out to be the spirit of Margaret of Anjou. Derek then came into contact with an evil male spirit who lives in the house in the 18th century. As the team moved upstairs, Yvette complained of a very painful bad back. Derek said this was a result of spiritual drainage, caused by the negative energy in the house.
With Yvette still suffering from back pains the crew switched to night vision and brought in a second psychic, Ian Lawman, who joined Yvette, Karl Beattie and Stuart Torevell in the attic. While in this area, a book hit Karl in the back of the head, having been seemingly thrown by an unseen force and the team were surrounded by unexplained knocks and bangs.
Later Derek joined the team in the attic, when a book, 'The Ten Principal Upanishads' fell from a shelf and a creepy illustration of an eerier looking man fell out of the book. When they left the attic, another book was thrown, hitting one of the crew in the leg.
Towards then end of the episode the team held a séance and Derek became possessed by the evil spirit he'd picked up on earlier, Daniel. Derek became very aggressive and Yvette has to square up to him and shout at him to sit down.
This violent incident signalled the end of the investigation.
For reviews of all of the new episodes, plus highlights and evidence from the shows, and to find out when Most Haunted is on next, visit the Most Haunted episode guide.
Tags:
paranormalmost hauntedtelevisiontopicalgloucestershireshiver