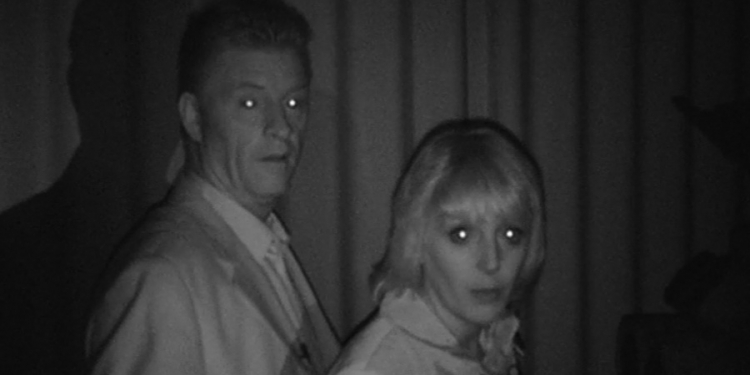 Yvette Fielding and her team of fearless ghost hunters travel to the Muckleburgh military museum in Weybourne on the Norfolk coast, where they hold a vigil among the tanks.
Weybourne has always been a military village, it has been a base for large numbers of troops for the wars of 1588, 1914 and 1938. The Muckleburgh Collection was started by Squadron Leader Berry Savory and his son Michael Savory. Together they have allowed thousands of people to remember the brave soldiers who fought so gallantly for our country.
In the museum's diorama room dark shadows have been seen, as well as the feeling of being watched, which has been reported by staff members. These occurrences happen both in the day and in the night. The museum's office manager, Christine Swettenham, claims that the hauntings are more prevalent in the winter. The office is said to be haunted by the ghost of Berry Savory, who makes his presences known as a cold spot. The museum's dog won't go anywhere near his old chair.
The museum has a collection of tanks, and these are said to be haunted too. The stories include hearing soldiers voices coming from within the fighting vehicles and heard their engines cooling down, even though they haven't been driven that day.
The museum has become famous, not just for its memorabilia, but also for its ghost sightings. The show's historian, Richard Felix, gave us a little background on the area, "the area around here is full of natural harbours and because of that it's always been a defence position, because these harbours of course bring invaders, the Roman, the Saxons, and they believe that also vikings landed here." Because of this, he explains, there has always been soldiers camped around here.

According to Richard, this military history brings with it plenty of death, many of which were untimely. There's a story of six ATS women who were killed at the base when an anti-aircraft gun blew up. There's also claims of former military personnel being killed in suspicious circumstances.
When Derek Acorah arrived and started his investigation in the tank hall, he picked up on the spirit of an American soldier. Yvette, Derek and the team then moved into the adjoining corridor, where he felt the presence of another male spirit who may have committed a murder in life. Moving along into the office, Derek straight away picked up on the essence of a spirit, minutes later he entered a trance-like state and seemed to be possessed by the spirit of Berry Savory.
With the lights out, the team continued their investigation using their night vision cameras in a First World War ambulance. The screams of a dying man have been heard coming from this empty vehicle. Derek identified this man as someone called Robert. Meanwhile the crew were hearing odd rattling noises in the restaurant, which the team were using as their kit room.
Derek has picked up on the spirits of the six women who were killed, so he was taken out into the ground to a wartime pillbox where the accident happened. Witnesses have reported seeing floating lights around the structure and believe these could be the spirits of the women manifesting. Although the lights didn't make themselves visible, Derek did pick up on the essence of this light and recounted the tales of those who have witnessed them.
The team split up, the show's director Karl Beattie took camera man Rick Fielding and Phil Whyman to the tank hall, where they climbed inside the supposedly haunted vehicles. Phil described the conditions inside the tank as being very claustrophobic and smelling of diesel, but the stuck in out for an house in the darkness. Meanwhile, Yvette was with Richard and fell crew members Craig Harman and Tom O'Carroll were back in the office, where Derek was aware that a picture was missing from the wall, apparently it had fallen from its hook in unusual circumstances. The was indeed correct, and the picture was still in the room and the team returned it to its rightful place on the wall.
The museum's historian, Neil, claimed that he saw the top half of a male figure during the investigation. When questioned about the sighting, he said "I know it's going to sound contrived, but it looked like it had a battle jacket on." He also reported a drop in temperature at the time of the sighting.
Rick and Phil later investigated the ambulance room where they heard disembodied footsteps, unfortunately the sound wasn't picked up on camera. Yvette, Derek and the rest of the team joined them in this room, where they took heard plenty of odd sounds. Later Karl returned to the tank room for a lone vigil, where in the early hours of the morning he also heard footsteps coming from outside the tank he was in. He ran out to investigate but found nothing that could have caused the sound.
For reviews of all of the new episodes, plus highlights and evidence from the shows, and to find out when Most Haunted is on next, visit the Most Haunted episode guide.
Tags:
paranormalmost hauntedtelevisiontopicalnorfolkshiver