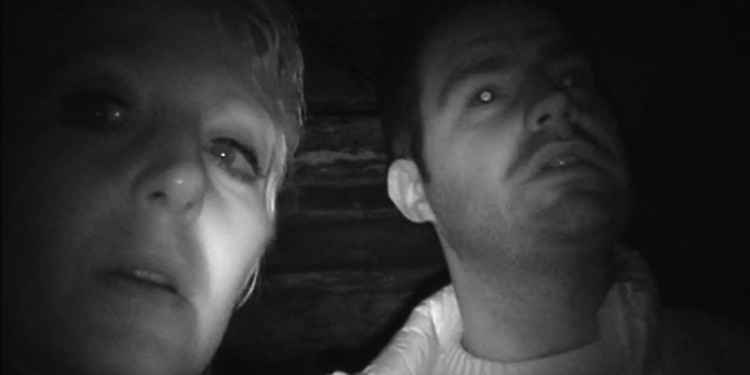 Yvette Fielding and a team of experts visit Derby, which is reported to be the most haunted city in Europe. Throughout the ages it's been a Roman fort, trading post, Saxon village and viking town.
Over the years it has always been a very busy city with a lot of history and thousands of people have passed through this bustling place each day for hundreds of years. So, it's no surprise that Derby is said to be one of the most paranormally active cities in the world.

Normally the team spend 24 hours in just one location, but this week Yvette and the team are spreading their time between three, The Bell Inn, Lafferty's Pub and The Heritage Centre. All of them have reports of ghostly goings on, including poltergeist activity and as if three location wasn't enough, this week, there's a murder mystery to solve.
Over the centuries coaching inns made a fair trade, but also attracted the likes of highwaymen, robbers and murderers and The Bell Inn has its own unsolved murder. Can Derek Acorah uncover the truth? The pub is said to be haunted by a Victorian lady who materialises in front of drinkers at the bar and in room 29 the ghost of a 18th century serving lady has been seen. She's said to have been killed in this room by having her throat cut.
Lafferty's Pub, another old inn which was formerly known as The George dates back to 1693 and has been the location of many disturbing paranormal occurrences. In 1994, a team of men working in the pub unearthed a human skull directly under the pub. Ever since the pub is said to have been haunted by poltergeist activity. Visitors have seen glasses slide off bars on their own and even smash in their hands. The bar is also said to to be where the ghost of a Victorian lady roams, could the skull belong to the lady?
The final location in this week's episode is a building which started its life in 1554 as a boys grammar school and is built on an old plague pit, it is now the Heritage Centre. One of the most common ghost sightings here is that of a little boy, he's been seen upstairs in the dormitories and wears a leather waistcoat and has blond hair. It's been claimed that he wanders around the dormitories and has been seen to walk through walls.
The show's resident historian, Richard Felix, starts the show by telling us that "Derby is the most haunted city in the country, it has more ghosts than even York." Phil says that he thinks Derby is so haunted because it sits near enough in the middle of the country and is a "powerhouse of energy" due to the ley lines and ancient pathways which pass through it.
The show's spiritualist medium, Derek, arrived first at The Bell Inn and started the investigation in room 29, where straight away he picked up on the murder servant. He also picked up on the essence of an evil soul who he described as a "barbaric beast," the man responsible for the murder.
The team then moved on to Lafferty's, where Yvette hoped Derek might be able to identify the skull that was found there. Derek straight away picked up on it being a female skull and named her Sally. He also said that the murdered was the spirit of a man he'd picked up by the name of Theo. Without any surnames it wasn't possible to trace their connection to Lafferty's.
At the Heritage Centre, Derek instantly picked up on the spirit of children who visit the location in spirit and said he thought there was probably a lot of object moving and being thrown.
The team split into three for vigils at the three locations. Up in room 29 of The Bell Inn, Richard, who conducts ghost walks in the area was calling out to the spirits saying that he often stands outside the pub talking about the spirits. Richard asked the spirits to give the group a sign if they've heard him outside talking about them. No sooner had he finished speaking, there was a loud bang, which turned out to be a door slamming. Richard was convinced it was paranormal, while Yvette was sure it was just the result of breeze.
Victoria Lysaght, the show's production manager, screamed when the red light on a coffee machine came on at the Heritage Centre. Later Victoria ventured upstairs with makeup lady Catherine Howe, and crew members Rick Fielding and Stuart Torevell.
Karl Beattie was with sound guy Tom O'Carroll, and cameramen Andy MacDonald and Craig Harman at Lafferty's. They heard the banging of definite movement coming from upstairs.
The investigation ended with Yvette, Richard and paranormal investigator Phil Whyman conducting an uneventful séance at The Bell Inn.
For reviews of all of the new episodes, plus highlights and evidence from the shows, and to find out when Most Haunted is on next, visit the Most Haunted episode guide.
Tags:
most hauntedparanormaltelevisiontopicalderbyshireshiver