10 Most Haunted Castles In Ireland

Ireland has relied on its castles during various historical conflicts including the First World War, but these battles have left their mark on these stunning structures.
Below are the ten castles in Ireland that are best known for their current and historic ghostly residents. 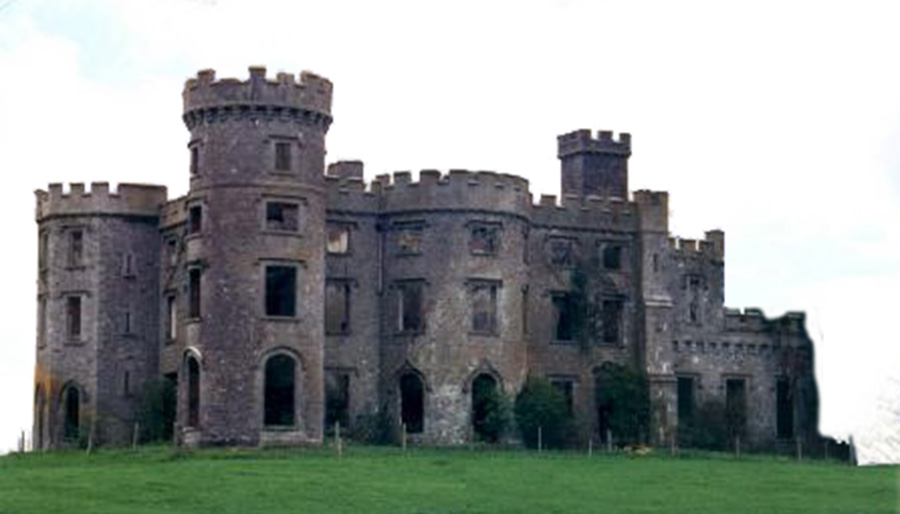 Killua Castle is situated near Clonmellon and was built in about 1780 by Sir Benjamin Chapman in 9,000 acres of surrounding farmland. The building is now in ruinous condition, but was partially renovated in 2006.

The last Chapman to live in the castle was Thomas Chapman who left his wife and family in Westmeath and moved to England, but one previous resident is said to have stayed behind to haunt the castle. The castle's grounds are said to be haunted by a former land owner who is said to have cheated Chapman out of his money, before drowning in a nearby lake. 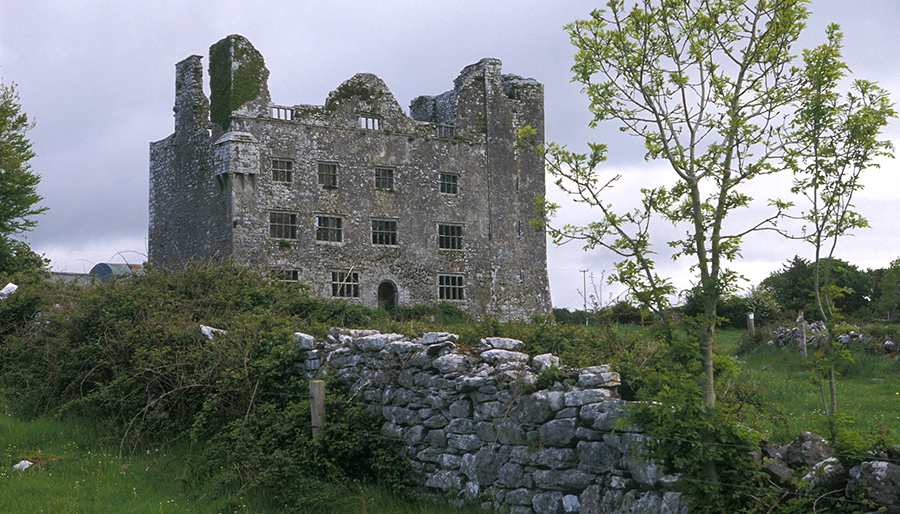 Photo: © Jerzy Strzelecki
Leamaneh Castle is situated about 30 minutes away from the famous Cliffs of Moher, which feature in 'Harry Potter And The Half-Blood Prince' as the location where Harry and Dumbledore go in search of one of Voldemort's horcruxes in an unnamed cave by the sea.

The castle itself is said to be haunted by the ghost of "Red Mary", who was rumoured to have had over 20 husbands, most of them all meeting a similar untimely death. Eventually, locals sealed Mary alive in a hollow tree trunk on the castle's grounds for her crimes. Visitors to the ruins have reported hearing her evil cackles as they walk around the grounds. 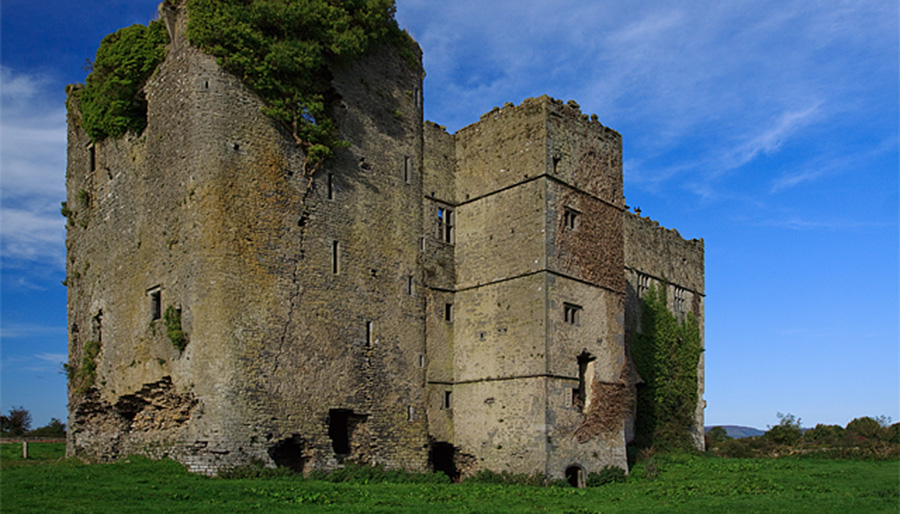 Photo: © Mike Searle
This ruined castle in the village of Loughmore, near Templemore in County Tipperary, Ireland is said to be haunted by a male spirit who's believed to have taken their own life at the castle in the mid 18th century.

The oldest part of the castle was originally built in the 15th or 16th centuries and consists of a four-storey tower-house. Additions were made by the Purcell family in the seventeenth century. The family lived in Loughmoe Castle until around 1760. 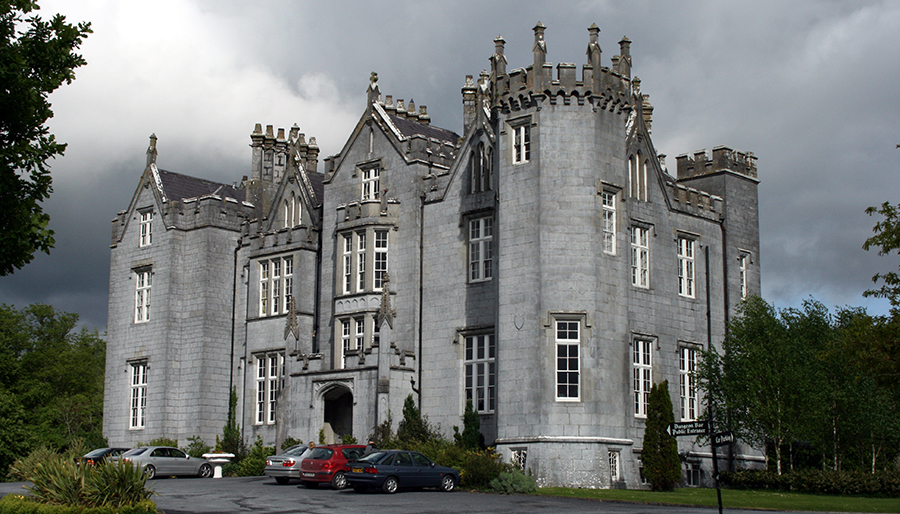 Photo: geograph.ie
The most famous ghost to haunt this Gothic-style building is that of a the Monk of Kinnitty, a former resident of the castle, which over the centuries has been home to Augustinian monks, been partially destroyed by fire and is now a hotel. Two of the most haunted rooms in the hotel are the Geraldine and Elizabeth rooms, where staff and visitors have reported a general sense of unease, as well as strange knocks and bangs. 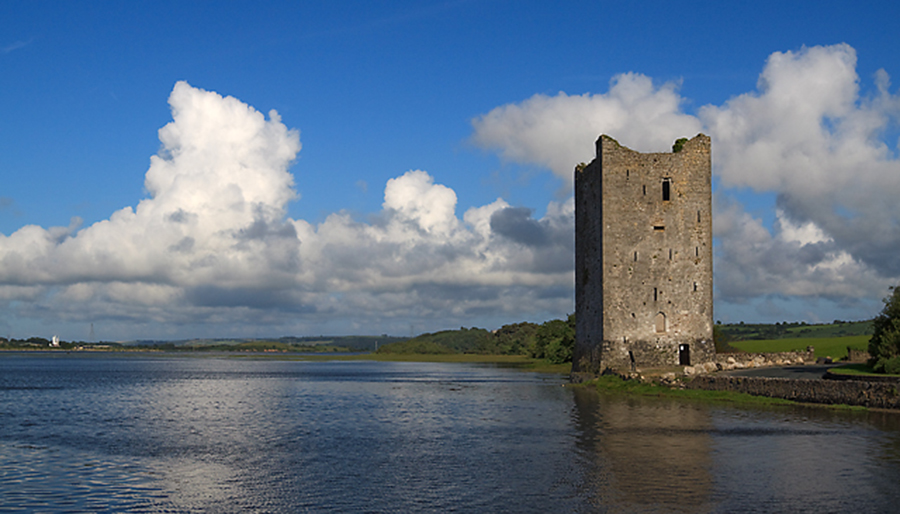 Photo: © Mike Searle
Belvelly Castle is a 14th or 15th-century tower house in County Cork, over the last few years the castle has been converted into a private dwelling.

The castle's tower house is said to be haunted by several ghosts, including the spirit of Lady Margaret Hardnett. In life she was said to have a number of suitors and, due to her vanity, an extensive collection of mirrors. One of her suitors captured and brought her to the castle in the 17th century, where she was starved into submission, and eventually lost her beauty and smashed all of the mirrors in the castle.

It's said that her spirit still roams the castle to this day, engulfed in a dark haze and walking from place to place rubbing at patches of the wall until they shine like mirrors. 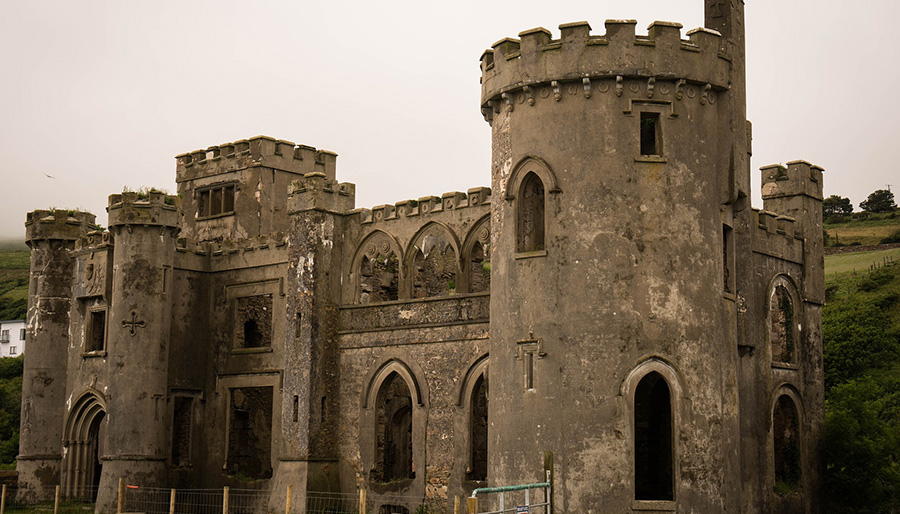 Photo: pixabay.com
Clifden Castle was built in the 19th century as a romantic gesture, but fell into disrepair during the Irish potato famine of 1845 and was abandoned. As a result, starving peasants moved into the remains of the castle and its grounds for shelter. Many of the poor died here, and it is said to be their ghosts that still haunt the castle to this day. 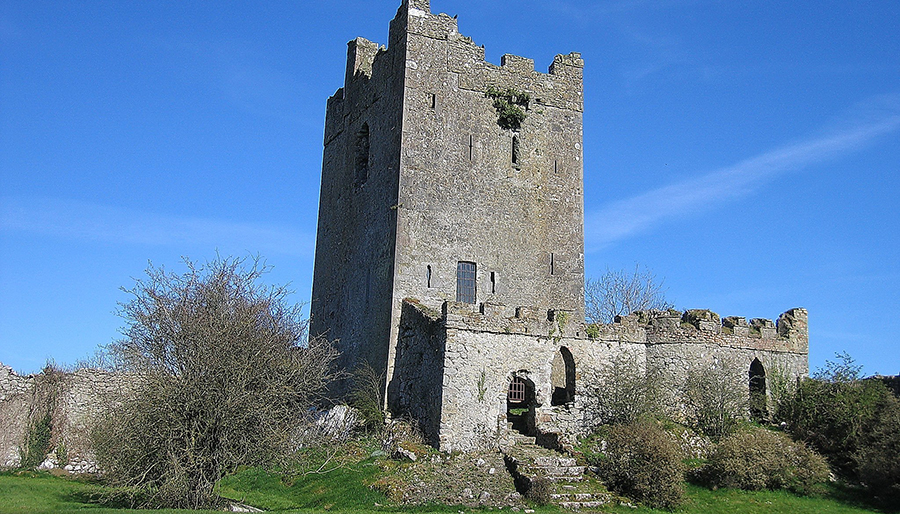 Photo: © Sarah777
The 16th century Clonony Castle is a Tudor castle complete with secret passageways and a murder hole. Its most distinguishing feature is a large three-story tower. The castle was given to the father of Anne Boleyn by King Henry VIII, in exchange for the hand in marriage of his daughter.

The castle's ghosts include a skeletal figure known as "the Thin Man" who reportedly appears at the top of the tower, he is often said to be surrounded by a strange glow. 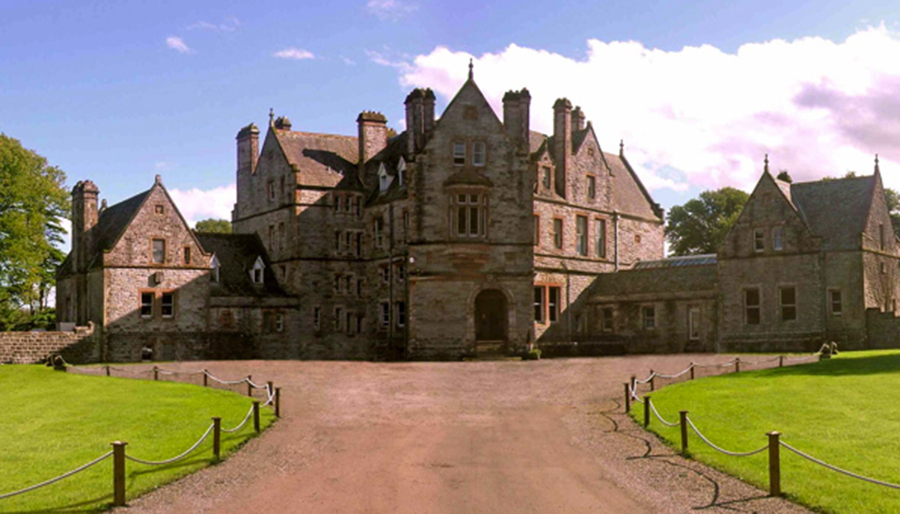 Photo: © Lukie Baggs
This 17th century castle is now a luxury hotel and has been in the Leslie family for over 300 years, following its purchase by Bishop John Leslie from Sir Thomas Ridgeway in 1665. The castle made headline news in 2002 when Sir Paul McCartney married Heather Mills in the family church located on the estate.

The hotel has had many notable guests over the years including Rolling Stones frontman Sir Mick Jagger, British astronomer Sir Patrick Moore and of course Yvette Fielding and the 'Most Haunted' team, who investigated the castle in 2004, joined by television presenter, Gaby Roslin.

Several deceased members of the historic Leslie family are said to still roam here to this day. The most famous of these spooks is that of Norman Leslie, he was an officer in the Rifle Brigade and was killed in France at the beginning of the First World War. Two days before his death, his mother woke in the middle of the night to see him standing at the foot of the bed. She said he looked at her, smiled and then disappeared. The day Norma died, in 1914, the gamekeeper was standing by the sundial at the lake in the castle's grounds and he saw Norman in his full uniform. The groundkeeper wondered why Norman had come back, but moments later he vanished.

Since then, Norman has been seen around the hotel and its grounds on many occasions, especially in one of the bedrooms, known as the "Red Room" and Norman's former bedroom, where the ghost of a white lady has also been seen. Misty shapes and ghostly figures have also been seen in various parts of the hotel.

Another notable ghost that haunts the castle is that of Lady Constance, who lived in the castle many years ago. She makes her presence known to unsuspecting guests by moving objects around, and opening and closing the doors. 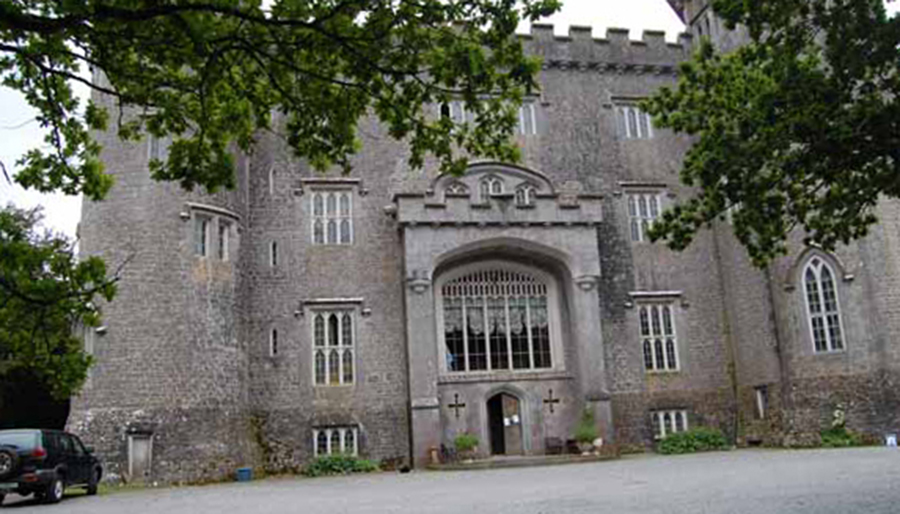 Photo: geograph.ie
The castle is located in the centre of Ireland near the town of Tullamore, it was built by Charles William Bury in the 1700s over the top of an ancient druid burial ground, where people were buried alive to stop the spread of the plague. There is a labyrinth of dungeons beneath the castle, but what they were used for is not clear. Screams and cries have been heard coming from the empty dungeons at night.

Many people over the years have encountered ghostly apparitions, glowing lights, and noises - often the sounds of ghostly laughter to terrified screams. The current owners, the O'Bonnie family who moved here from the US, have experienced disembodied voices in all but empty rooms and the apparitions of children have been seen on the stairs, where supposedly a young girl once fell to her death. One visitor even reported seeing a group of druids surrounding her bed on the night of the winter solstice. 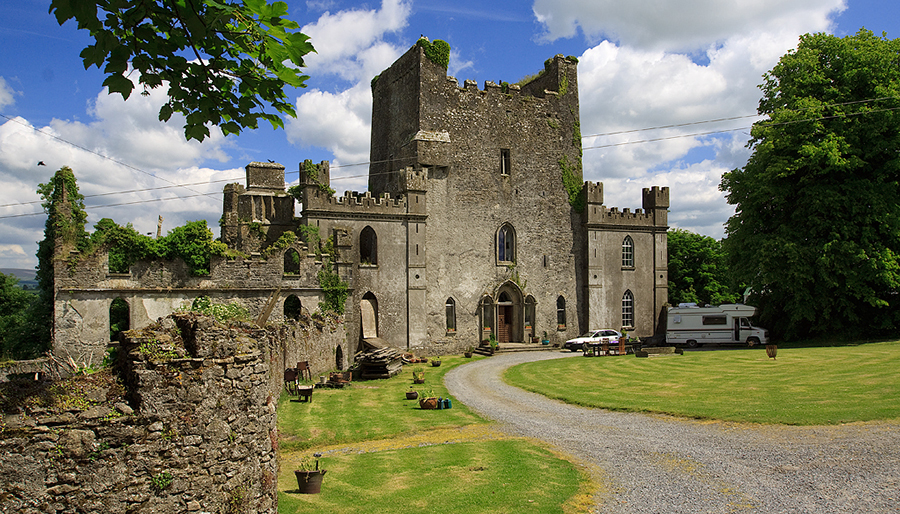 Photo: geograph.ie
The castle was built in the 14th century and was used as a stronghold of the O'Carroll family, powerful Irish princes who thought nothing of murder. In fact, the castle's history seems to be nothing but a massive bloodbath. In the 1930s, workmen discovered three cart-loads of human bones in the dungeon, thought to be those of 39 people who were slaughtered in the former chapel.

There's a nasty ghost known as an elemental, that enjoys terrorising residents. An elemental ghost is said to be half-animal and half-human and is supposed to be formed by negative energy due to the property's grim past. As well as this sinister being, the castle's current owner Sean Ryan has experienced what he describes as "copycat" sounds when he's working. Sean says that the elemental often produces foul smells like rotten flesh.

The ghost of a little girl has been spotted throughout the house and was even witnessed falling from the battlements by a visiting American actress. Another ghost, that of an old man, resides in the oubliette but is said to sometimes leave this area and roam the upper halls.
This is an ever changing, dynamically updated page. Haunted locations may move up or down the list as new locations are added to our database and scores are reviewed to reflect new activity.
Tags:
paranormalhaunted britainireland