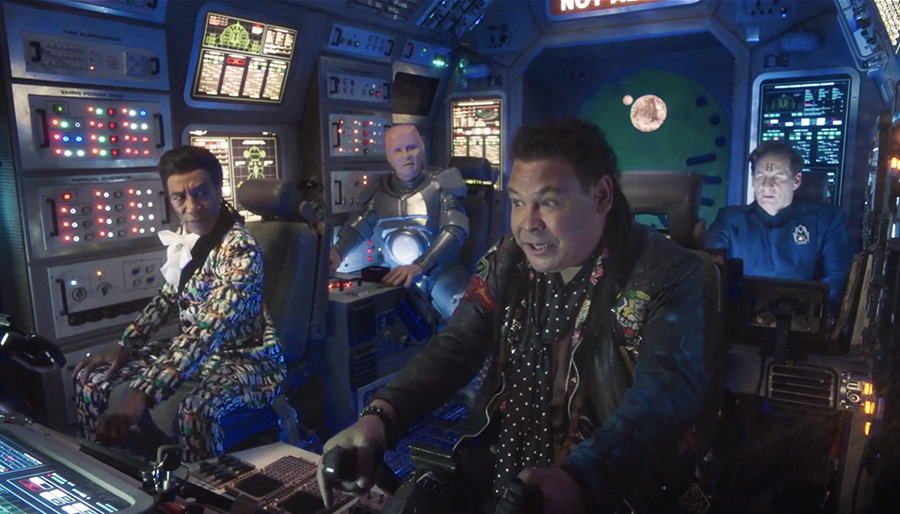 The crew of the mining ship Red Dwarf have found themselves in another sticky situation and have had to call 'fourth emergency service' for help.
The action unfolds in a new television ad for breakdown service the AA, and features all four members of the long-running British comedy show, Lister, Cat, Rimmer and Kryten.
The ad, called 'Stellar Rescue', shows an AA engineer come to assist Red Dwarf's runabout craft, Starbuck, after it has broken down on desolate alien planet three million years into deep space.
The advert has been shot in the style of an episode of the cult show, which is set to begin filming its 13th series for UKTV channel Dave later this year. It was written in collaboration with Red Dwarf creators Rob Grant and Doug Naylor.
Lister, played by Craig Charles, is seen contacting the AA using their new app, which features a technician-tracking service, to report their breakdown on the intergalactic hard shoulder. While Chris Barrie reprises his role of Rimmer and messes around on the phone with other breakdown companies. They are joined in Starbug's cockpit by Danny John-Jules (Cat) and Robert Llewellyn (Kryten).
The out-of-this-world campaign premiered on ITV at the beginning of July, but the recovery service teased the ad by staging a similar intergalactic mishap in Newcastle last week and once again, the AA were on hand to get the spaceship, which was actually just a fan's remodelled car, back on the road.
The ad, which will run across television, cinema and radio, ends with the tagline "the future of breakdown, today."
Add A Comment
Tags:
red dwarfcomedytopicaltelevision