Secrets Of The Illuminati Revealed 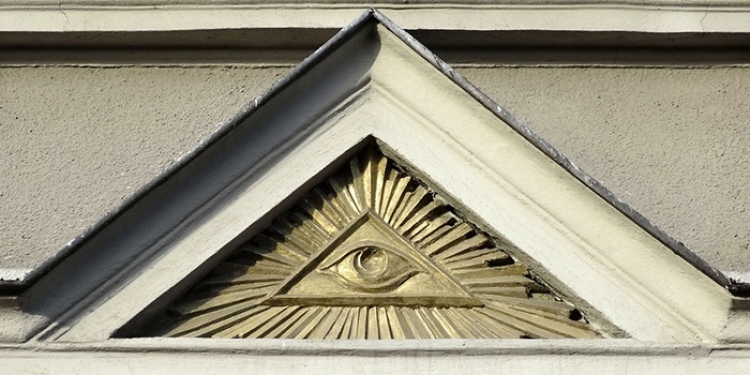 Photo: pixabay.com
There's lots of speculation, especially on the internet, that the Illuminati is real and have many celebrities and influential people amongst their ranks. Whether you believe they exist or not, they generate plenty of conspiracies and raise lots questions.
So, what's the truth. The Illuminati was founded in 18th century by an anti-clerical professor and they sound like the type of secret society I would love. Calling themselves the "enlightened", they opposed superstition and the interference of the church in public life. They were basically the skeptics of their time. They also aimed to prevent the government abusing its power. The order was based on the Freemasons, with a hierarchy and mysterious rituals.
The modern day perception, especially among conspiracy theorist, is that the Illuminati control the government through commercial organisations, which interestingly would be something the original Illuminati would have opposed.
Of course the general consensus is that the Illuminati disbanded almost 200 years ago, but many believe that they still operate from the shadows, influence our society, kill our beloved celebrities and taunt us by leaving clues to their existence all over the place, in the form of the Illuminati logo, which depicts an eye in a pyramid.
Below are some of the most frequently asked questions about the Illuminati, including the answers to the mystery.

Why do the Illuminati want to control us?

Conspiracy theorist believe that the Illuminati's ultimate goal is for the global elite to eventually rule the world through a global authoritarian government. If their goal is to take over the world, they're not doing a very good job considering their secret society formed over 240 years ago.
But despite their seeming inability to actually takeover society, they've been accused of everything from controlling the music industry, shaping world governments, staging terrorist attacks, and even suppressing technology brought to Earth by alien races.
If the Illuminati were able to take control of the banks, the government and big corporations, then they'd be able to profit in order to further grow their wealth. It's claimed the higher ranking members of the Illuminati have shares in large organisations, sometimes hidden through shell companies or fictional business men. They then use their powered and influence to ensure that large contracts come their way, including those funded by governments and taxes.
By having this level of control and being intertwined with global leaders and local governments, the Illuminati would be able to have a say in how countries are run, and even the police force and armies. This would allow them to start wars to exploit wealth from other countries and give them immunity for any crimes they commit by placing operatives in high ranking positions within the police force and intelligence services.

What does the Illuminati eye and pyramid mean?

You've probably seen the infamous symbol of the Illuminati countless times. The symbol consists of an eye surround by rays of light inside of a triangle, it's known at the Eye of Providence or the All-seeing eye, and you can see it everywhere, including on the US one dollar bill.
It's said to represent God watching over humanity, although conspiracy theorists think its meaning has been changed to reflect the Illuminati or the New World Order looking over us.
The eye's connection with the Illuminati is actually another myth. It was originally used as a symbol by another secretive society, the Freemasons, who introduced it into their iconography in 1797 as a reminder that our thoughts and deeds are always observed by God.
This is believed to be the reason why the symbol is on the dollar bill, because some of the founding fathers were Masons.
As for the origins of the triangle element of the icon, this is said to symbolise an Egyptian pyramid, which was seen as a representation of one of mankind's achievements which has lasted for thousands of years.

Why do the Illuminati put symbols everywhere?

Imagine there was a secret society, hidden in the higher echelons of government, quietly running and influencing the world from the shadows. Their members are completely anonymous and unknown to the public - this is the Illuminati.
So, why do we see what is supposedly the Illuminati's logo all over the place? For a secret society they really love to leave clues of their existence in plain sight. Not only that, but we also know who the celebrity members are, which companies they back, and even the celebrity sacrifices they are behind.
If the Illuminati were real, they wouldn't leave clues. The Illuminati that online conspiracy theorist believe in are the WORST secret society imaginable, they are really bad at keeping themselves secret.

What is the Illuminati hand sign/handshake?

According to conspiracy theorists, Donald Trumps hand signals are a sign that he's a member of the Illuminati, again proving that its members are completely unable to keep the secret. Trump's hands are often quite animated during speeches and theorist say that some of the movements and a shapes he makes are clues, and Trump's not the only one.
The signals range from everything including the classic "okay" gesture with the index finger and thumb touching to make an open circle. Apparently when the Illuminati use it, instead of meaning "I'm okay," it means "666," a reference to the number of the beast, Satan, confirming the Illuminati's anti-Christian stance.
Other hand signals include the two-finger "rock salute," popularised by singer Ronnie James Dio. Also, forming a vague triangle shape with two hands while resting your hands in your lap, another gesture often used by President Trump.
Of course, there's nothing in this at all, these gestures have no connection to the Illuminati and if they were secret symbols, prominent figures wouldn't use them in television broadcasts, especially those who are already rumoured to be a member of the Illuminati.
Another frequently asked question is whether there is an Illuminati handshake which is used to identify fellow members of the order. No, there is no handshake, people are getting this confused with the secret handshake that is traditional observed by the Freemasons.

What does "Illuminati confirmed" mean?

"Illuminati confirmed" is a meme which dates back to around 2013 and is now mostly used to comic effect to "out" a celebrity or prominent person who drops deliberate or inadvertent clues that they are an Illuminati member.
It's most commonly used in the comments section of music videos on YouTube when fans spot either the all-seeing eye, a hand sign, or sometimes literally ANY triangle shape.
The comments simply read "Illuminati confirmed," literally meaning that membership to the Illuminati has been confirmed by whatever it is the commenter has spotted in the video, tweet, or Instagram post.

Why do the Illuminati kill/sacrifice celebrities?

One of the most bizarre conspiracy theories relating to the Illuminati is that they sacrifice celebrities, often it's performers from the world of music who are killed.
Some of the names the society have been accused of murdering are Prince, Whitney Houston, Kurt Cobain, Michael Jackson, Bob Marley, John Lennon, Jim Morrison, Tupac Shakur and Amy Winehouse. Plus Marilyn Monroe, Bruce Lee, Diana Princess of Wales and former US presidents Abraham Lincoln and John F. Kennedy.
But why are these people killed? Presumably the conspiracy theorist believe that they oppose the ways of the Illuminati, but there is some conflicting information here. Other theorists believe that the Illuminati regularly murder and clone influential people, that way they can control the population through their army of clones, obviously it's easier to get a clone to deliver your message than a real celebrity.
It's claimed that Russia's president Vladimir Putin is a clone, as is Queen Elizabeth, Hillary Clinton and Britney Spears, to name just a few. So if this is true, why did the likes of John Lennon and Prince get wiped completely? Why weren't they replaced with a clone? Fake theory confirmed.

What are the joining requirements of the Illuminati?

As the Illuminati is nothing more than internet fiction, it's impossible to actually join them. But despite this, many gullible people have been sucked in to the stories and headed online to try to seek out secret New World Order registration web pages... if they were that secret would you really expect to find an application form on Google?
But despite the fact its completely fabricated, a spoof Illuminati website has been accessed by thousands of people hoping to join the order. This group isn't the only one trying to tempt people into joining their ranks online, there are countless spammy social media accounts which promise the dim and vulnerable untold riches if they join. Of course these messages are part of a scam designed to extort money from the gullible.
Tags:
conspiraciesilluminati