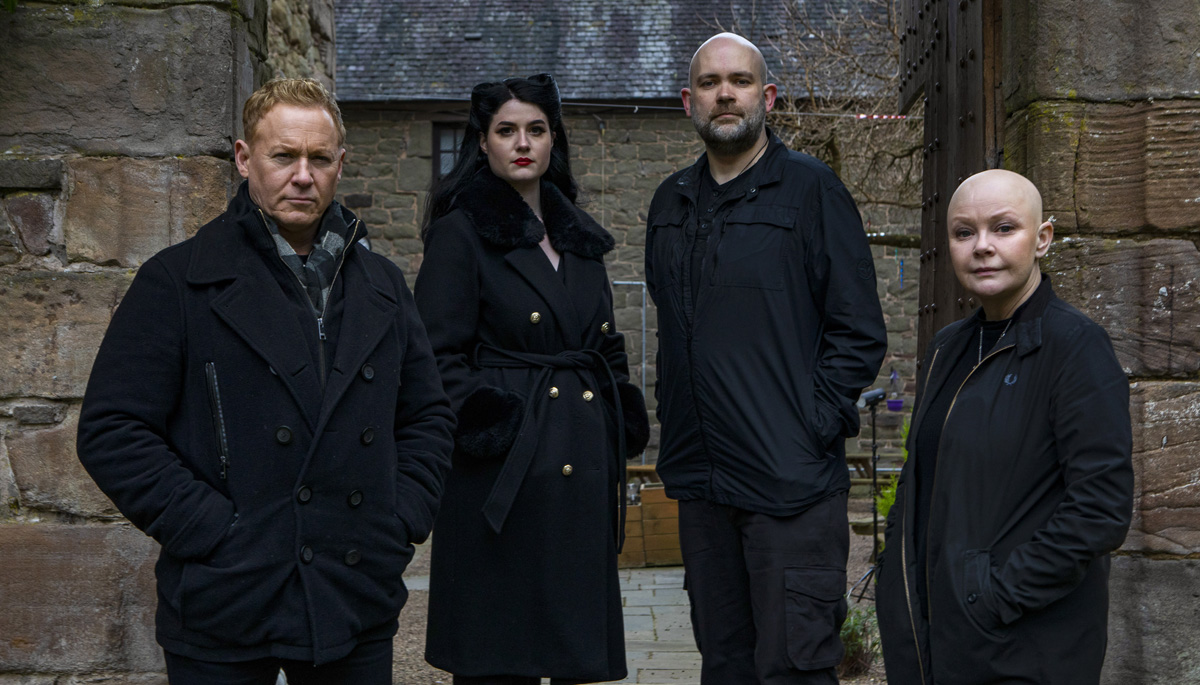 Brand new 10-part series 'Spooked Scotland' features exclusive access to the spookiest Scottish locations, dark places where paranormal investigators have never been allowed to shine a light, until now.
In 'Spooked Scotland', renowned American medium Chris Fleming, star of 'Help! My House Is Haunted', and his partner in crime Scottish television personality Gail Porter lead an expert paranormal team to investigate the chilling crimes, supernatural sightings and terrifying stories across one of the most haunted countries on earth: Scotland.
It's been 15 years since Gail and Chris starred in the cult paranormal series 'Dead Famous', so there was only one call to make when Gail decided to delve into why her homeland is experiencing more eerie activity than ever before.
Chris, who has dedicated his life to pursuing extreme hauntings, described Scotland has the ghost hunters' holy grail. He says in the show, "Scotland, an ancient hotspot for the supernatural, and now experiencing more spooky activity than ever before." 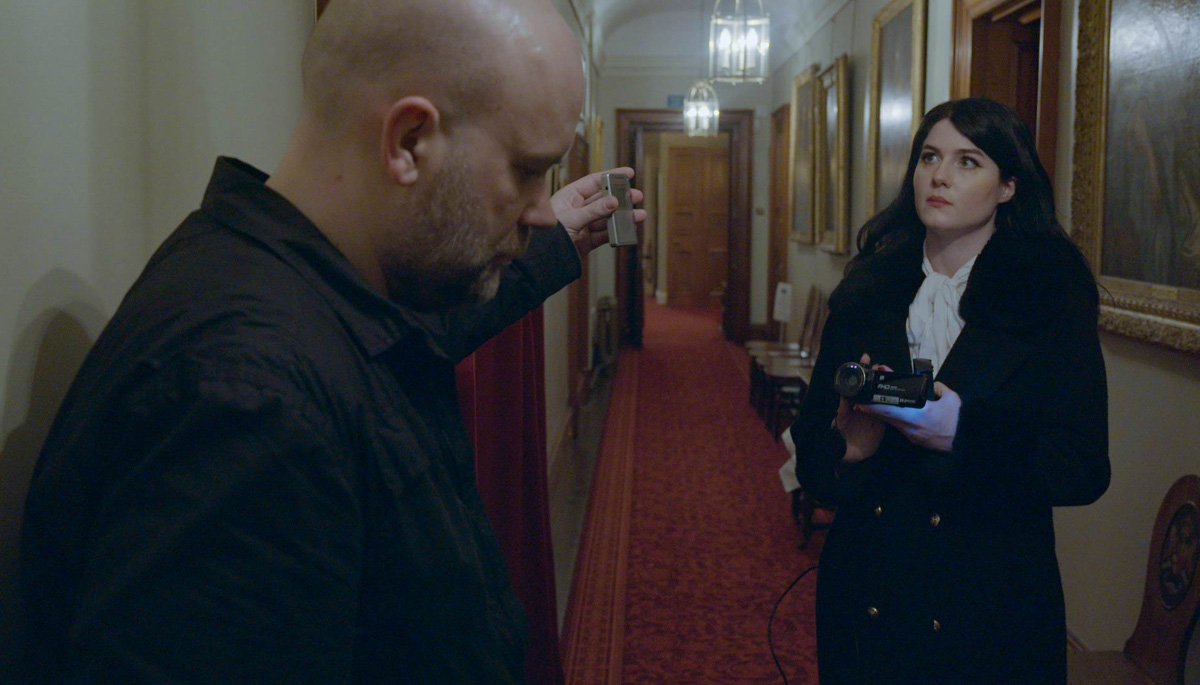 Chris and Gail are joined by two members of the paranormal elite; Evelyn Hollow, a writer and parapsychologist from Edinburgh who is best known as regular on the hugely popular podcast series, 'Uncanny', and Ryan O'Neill, a paranormal researcher from Scottish Paranormal.
Together they investigate some of this ancient nation's spookiest locations by day and by night, determined to solve one of the biggest mysteries plaguing modern Scotland.
With exclusive access to places that have never let a film crew in before they will try to make contact with the spirits to explain the paranormal mysteries that have haunted Scotland's most iconic landmarks for centuries, including Brodick Castle, the Edinburgh Vaults and Stirling's Old Town Jail.
Scottish native, Gail said, "growing up here, I've always been fascinated and terrified by unexplained paranormal activity."
Equipped with the latest specialist paranormal technology they'll come face to face with long dead tortured souls who are still plaguing the living and find out why.
The first episode, which sees the team head to the Isle of Arran where not only do they encounter very vocal spirits, but also face the wrath of the fairies. The team come up with unique ways to communicate with these mythical and mischievous creatures at the infamously haunted Brodick Castle and the desolate Machrie Moor, which is said to be the most active fairy site on the island.
'Spooked Scotland' premieres on Really at 9pm on May 27. Really is available on Sky 142, Virgin 128, BT 17, Freeview 17, Freesat 160 and is available to stream live or catch up on demand on Discovery+.

Episode 1: Brodick Castle, Isle of Arran
With a blood-soaked history of murder, betrayal, beheading, invasion and disease, the Isle of Arran is awash with tormented spirits and ghostly apparitions. It is also home to the infamously haunted Brodick Castle, but that's not all that lies within these walls. In this episode our team not only encounters very vocal spirits, but they also face the wrath of the fairies. They will need to come up with unique ways to communicate with these mythical and mischievous creatures.
Episode 2: Bannockburn House
Sending shivers through your body at first sight, the 17th Century mansion, Bannockburn House, is the epitome of a haunted house. In this episode our team will be battling souls lost throughout Scotland's bloody history. Using one-of-a-kind equipment they'll be interacting with what could be Bonnie Prince Charlie's ghost. Not only that, our team will come face to face with what we believe is a demonic entity. Is this the evil force that has trapped so many souls within this tormented house?
Episode 3: Stirling Old Town Jail
With a blood-soaked history of brutal warfare, public torture and grisly executions, Stirling Old Town is said to be the most haunted square mile in Scotland. Slap bang in the middle of this hotbed of paranormal activity is the Old Town Jail. In this episode, the team are here to uncover if all the aggressive paranormal activity plaguing the jail is down to Stirling's very own Poltergeist. Chris will face one of his toughest challenges yet when the spirits get a little too physical. Clearly, they'll do whatever they can to push our team out.
Episode 4: Tron Theatre
The Tron Theatre sits on sacred ground, the stage stands in the shell of an ancient church burnt to the ground during an ancient ritual performed by Glasgow's satanic Hellfire Club. In this investigation, the team uncover poltergeist activity, shocking electronic voice phenomena and try to capture spirit interaction on camera. Did the evil arson by the Hellfire Club open a gateway and release a dark entity? We'll need our wits and rosary beads to battle this mystery.
Episode 5: Culross Palace & Town
The town of Culross has a dark and shameful history, for it was the epicentre of one of the worst witch hunts in European history. In this episode, the team contact the tortured souls of those wrongfully accused of making a pact with the devil. Trapped by the past, Chris wants to bring them peace and hold those responsible for such unspeakable cruelty to account.
Episode 6: Edinburgh Vaults
The city of Edinburgh is widely considered to be the most haunted in Europe. Buried beneath the cobbled streets of its Old Town lies the mysterious forgotten vaults. This is known as Edinburgh's "City of the Dead". Our team struggles to handle so many spirits at once and Gail will have to deal with more child apparitions.
Episode 7: Glencoe Masacre
In one of the most dramatic landscapes in Scotland lies the legendary Glencoe. The site of a notorious massacre, where Clan Campbell murdered over thirty MacDonalds in cold blood as they slept. Nearby stands Barcaldine Castle, said to be plagued by the ‘Campbell Curse'. In this investigation, the team spend the night in the Castle and uncover a male spirit who torments Gail and leaves her terrified.
Episode 8: Comlongon Castle
Just off the most haunted roads in Scotland lies Comlongon Castle and Hotel. Both have been abandoned, but in this episode the Spooked Scotland team have been given unique access by new owners. The castle is known for its infamous white and grey lady ghosts. Gail and Chris attempt to communicate with these tortured women. The team also have terrifying encounters with male spirits that lurk within the dungeons. It's a long night that nobody will ever forget.
Episode 9: Castle Menzies
Castle Menzies is a spectacular sixteenth century Scottish castle. By day it's a scene of romantic beauty, yet by night dark forces try to push any unwitting visitors out. In this episode, the team encounters the true wrath of murdered British soldiers and Gail will be faced with her toughest decision yet. Will this castle be too aggressive for our team to crack? Have they finally met their match?
Episode 10: Dundee's Verdant Works
Nearly 200 years ago, the Verdant Works was one of Dundee's deadliest factories. The owners were amongst the wealthiest in Europe, but their fortune was built on the exploitation of women and children as young as six. For the first time ever, the Mill has opened its doors to a paranormal investigation and the team are given the run around by spectral children who lead them to an unexpected and terrifying part of this Victorian factory.
Tags:
scotlandtelevisionparanormaltopicaldiscoveryplusspooked scotland