Most Haunted At Standon Hall, Part One - Series 20, Episode 8 Review 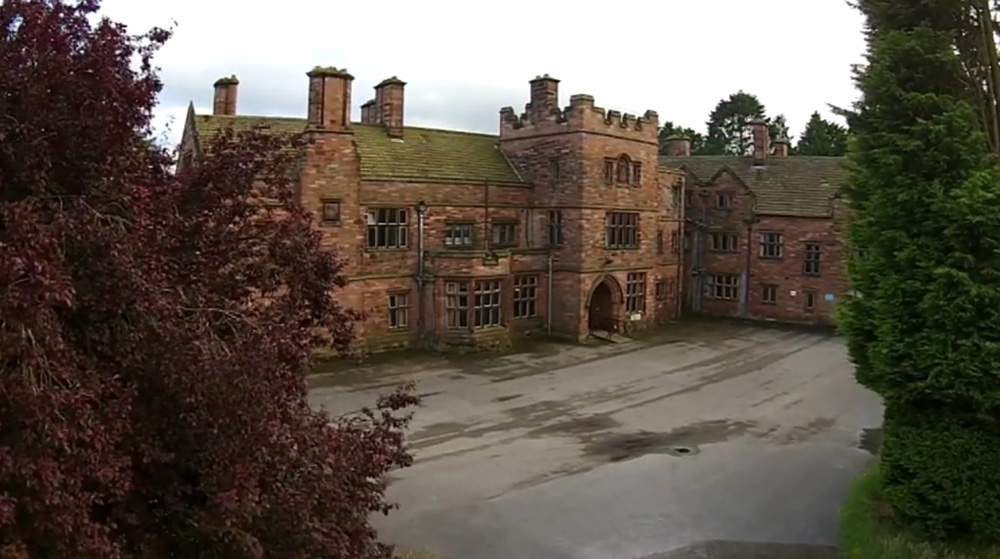 The Most Haunted team took part in a two-night investigation of Standon Hall in Staffordshire, one of the most unsettling places the team have ever staked out. The horrors they uncovered at the location are spread out over three episodes starting on Friday June 2nd at 10pm on REALLY.
The huge grade II listed building was built in 1910 as a private home but was only lived in for 15 years before it was bought up by Staffordshire County Council and put to use as a hospital and care home which was in operation until just over a year ago.
Now Standon Hall's maze of rooms and corridors are abandoned but over its 90 years of use the house has had its fair share of reports of the supernatural. Residents and staff claim to have heard doors opening and closing on their own, the sound of crashing crockery, cries and moans.
Witnesses say they've seen shadowy figures wandering the long corridors of this once bustling building and apparitions have been sighted in the form of doctors, nurse, children, soldiers, maids, and even a "grey lady."
Down in the house's foreboding cellar it's said that something negative lurks. Dark shadows have been seen moving slowly here and growling noise have been heard. On the grand stair case there have been reports of the disembodied sound of children laughing and giggling.
The show's resident skeptic, Glen Hunt pointed out during his and Yvette Fielding's initial walk around the building that the fact it is derelict and abandoned makes the house even creepier and before they even finished their walk around things started to get creepy as the team experiences a series of knocks and bangs in rooms 12 and 13 of the first floor.

Down In The Cellar 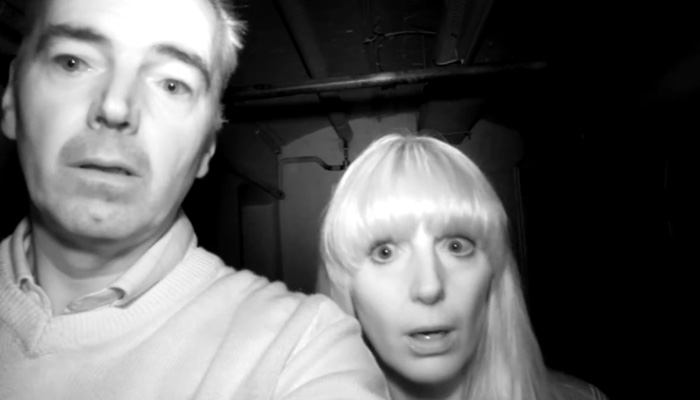 As always the team split up, while Glen and his crew went up to the first floor, Yvette and Karl Beattie made their way down to the cellar on their own. Standon Hall's basement is far from just one dark room, it consists of several rooms and corridors and seems to go on forever.
Yvette seemed to be having a bit of a laugh in the cellar, although she did point out that this might be down to nerves as she hid behind her husband, Karl. At one point Yvette screamed "it's behind us" and Karl suddenly spun around, which frightened the life out of Yvette and resulted in a funny telling off for Karl, "don't make any sudden bloody movements like that, don't do that it freaks me out, stop it."
But it wasn't fun and games for long, the pair heard a few noises which sounded like growling and then Yvette spotted something, she swore she saw an "outline of something" at the end of a corridor. She asked Karl to look back at the tape and we saw a replay with a voiceover from Yvette, "unfortunately when we replayed the footage, we couldn't see anything. Even when we enlarged the clip, the outline I saw remained elusive." This is often the problem with ghost sighting, when the camera fails to catch evidence, the witness is often still adamant that they saw a ghost that camera equipment failed to register... you just can't argue with that. 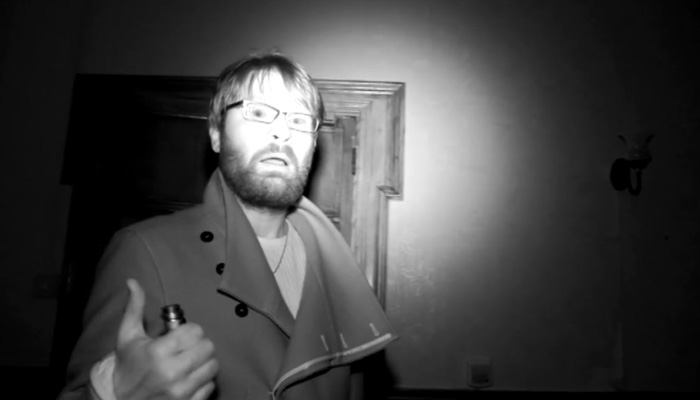 Up on the first floor, things were much darker for Glen who was joined by demonologist Fred Batt, cameraman Gregg Smith and the sound recordist Darren Hutchinson, who was really struggling with the atmosphere in Standon Hall.
Darren had been on the upper floor on his own turning the lights off, looking shaken he returned to the rest of group and said "there is something in here with us, I am more convinced in here than I have been in many other locations in a long time."
Darren was clearly distressed but this didn't stop Fred from going into one of his demonic chants, "in the name of the forces of darkness..." but Darren interrupted, "seriously? Are we really doing this in the one place that is pretty much guaranteed to have activity."
Glen reminded Darren that this was in fact their sole purpose for being in the building and they continued their vigil. 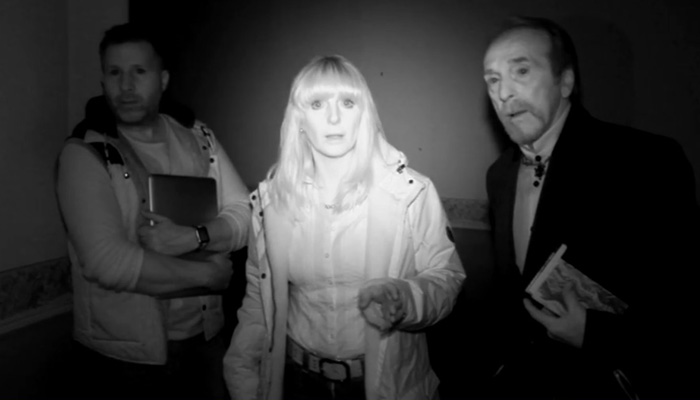 Later the team regrouped on the ground floor and things took a turn for the worse, by this point most of the gang had made it clear that they thought the house felt oppressive and unsettling, including Karl who seemed very uncomfortable in the kitchen.
After a few knocks and bangs they left the kitchen but as the last of crew walked out of the door there was an almighty crash behind them, fearlessly running back into the room to find the source of the sound, Karl and Gregg spotted a kitchen knife lying on the floor which hadn't been there earlier.
As the episode came to a close, a worried Yvette who was a little shaken by a knife being thrown, said "nobody can go anywhere on their own in this place" but of course the night was far from over as this incident only marked then end of the first half of Most Haunted's time at Standon Hall, and things just got worse as the story continued in episode nine. 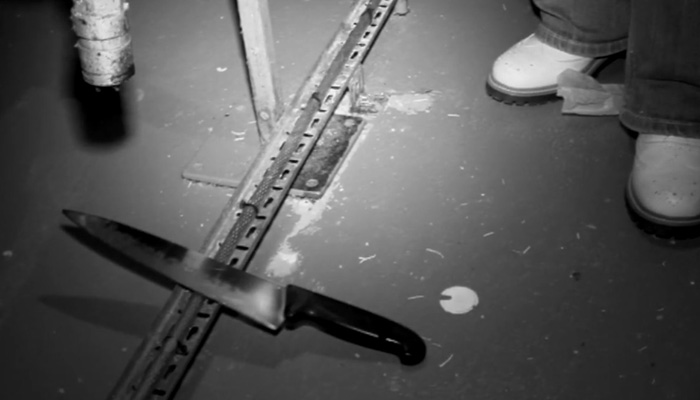 Episode nine picked up where last week's episode left off, the team were already freaked out from the incident with the knife but it didn't take long for more action to occur. As the gang headed upstairs following a shadowy movement they'd spotted on the staircase, Karl heard a clattering sound coming from downstairs and wanted to go and check it out.
It didn't take long for Karl to suggest splitting up, Glen chipped in "you've got a short memory haven't you," as Karl had clearly forgotten his wife's warning about not going anywhere alone. Yvette eventually agreed reluctantly but added, "please don't go to the kitchen again." She sent Karl off with Fred, who hadn't helped Yvette's nerves by reminding her that, "it's OK to be brave but when a knife's coming towards you it's a bit different, you can't do anything about that. If something wants to kill you, it'll kill you."
But as soon as Yvette left the room, Karl turned to Fred and said "right shall we go to the kitchen then?" and moments later they were back in the room where they'd already witnessed a knives being thrown around. 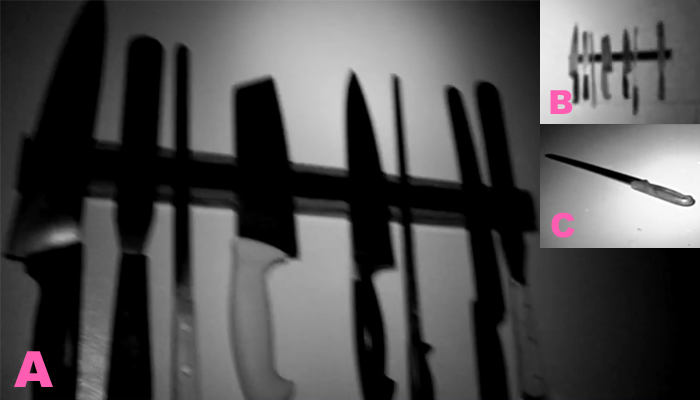 Karl put the most recently thrown knife back on the wall, completing a set of eight knives adorning a rack (picture A), but seconds later in Karl's footage it's clear to see that one of the knives had already vanished from the rack (picture B). Less than a minute later, while stood in the doorway to the kitchen at the other side of the room, Karl is hit in the head with a knife which lands at his feet, it's the missing knife from the rack (picture C).
Karl understandably seems shocked as the handle of the sharp kitchen implement struck his head having seemingly been thrown across the room at him, "something's hit me in the head, has it cut me?"

Karl may have thought the kitchen was scary but what was waiting for him upstairs was much worse. Yvette was furious that Karl and Fred had gone back down to the kitchen, "why did you go down there when I specifically said not to go down there?"
Fred tried to explain, "we had to." Yvette was having none of it, "no wait a minute, who's in charge of this investigation?" Karl answered, "you are." Yvette continued with her dressing down, "right, so when I say don't go down in the kitchen where knives are being thrown around, please don't go down in there, please show me a bit of respect for god's sake."
Karl tried to answer back was silenced by Yvette, who continued with her angry rant, "shhh, I don't want to hear about it, just do as I ask you to do. You're messing around with bloody knives, it's ridiculous. You should know better Fred. I'm really $&#*ed off with the pair of you because I asked you not to do it and you did it."
Yvette walked off leaving Karl and Fred behind, who instantly started smirking like school boys. Desperate to have that last word on camera, Karl cheekily said "Fred made me do it."
The argument was the last of the action in the manor house that night but the next morning the team continued their investigation of Standon Hall, this time in the abandoned outbuildings, their findings were documented in the rest of episode nine and concluded in episode ten.
»Standon Hall Part 2 (Episode 9) Review
»Standon Hall Part 3 (Episode 10) Review
Friday is now #Frightday as the new series comes to Really from April 14th. Watch on Freeview (17), Sky (155) and Virgin Media (129), or watch previous episodes of Most Haunted on demand on the UKTV Player.
For reviews of all of the new episodes, plus highlights and evidence from the shows, and to find out when Most Haunted is on next, visit the Most Haunted episode guide.