A team of ghost hunters got spooked by the mysterious scent of lavender perfume wafting through a disused and allegedly haunted courtroom in Nottingham. 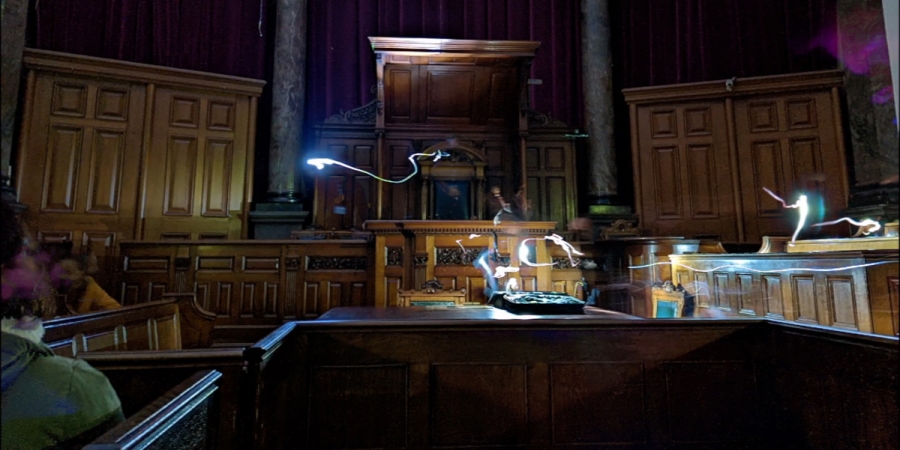 I recently attended a public ghost hunting event at the National Justice Museum in Nottinghamshire, an iconic venue with a famous reputation for its hauntings.
The impressive courtrooms, old prison cells and underground caverns are a popular haunt for ghost hunters. It is said to play host to ghostly apparitions, poltergeist activity, disembodied voices, slamming doors and unexplained drops in temperature.
After being split in to two teams we began our night of paranormal investigation in the bowels of the building, a disorientating network of man-made caves, subterranean cells and dungeons. We spent the first half of the night in this area, including the old punishment cells, but despite its grim history, we didn't experience anything remotely unusual or paranormal.
The second half of the night was spent in the courtrooms on the street level. These grand, wooden rooms proved to be a little more active, with some rather impressive knocks and bangs that were clearly heard coming from otherwise empty corners of the room.
However, for me, the most interesting part of our time in this room was the moment that guests picked up on the phantom smell of a woman's perfume.
It started out with one guest, who was stood in the dock to my left, saying "I can smell perfume, a woman's perfume. It smells of lavender." The room fell silent for a few seconds, perhaps if I'd have listened more carefully I'd have heard the other guests sniffing the air around them trying to detect the same smell at this point.
After a few seconds someone did. Another guest stood near the dock said she could smell lavender. Then another, then another. The smell spread across the courtroom, travelling as far as the tiered public benches to my left.
But I was in the middle of the room and I smelt nothing.
That's not to say the smell didn't exist, my sense of smell hasn't been the same since COVID, but on the other hand the fact I couldn't smell it in between these two points where others could might suggest that this was a form of phantosmia, the sensation of experiencing odours that aren't actually present.
Whether real or not, the way this smell spread across the courtroom reminded me of a well-known psychology experiment that was first conducted by Edwin Emery Slosson in 1899. In his 2011 book, 'Paranormality', Professor Richard Wiseman wrote about the time he replicated Slosson's experiment on the British television show, 'The People Watchers'.
The experiment saw 20 unsuspecting volunteers sat on four rows of chairs. The experimenters then pulled out a small perfume bottle containing bright green liquid and told the volunteers that they'd be testing their sense of smell by opening the bottle and allowing a strong peppermint scent to permeate through the room.
Once the lid was removed, the volunteers were told to raise their hand when they picked up on the minty fragrance. According to Prof Wiseman, within moments a few people in the front row raised their hands. Moments later the second row of people followed suit, and before long about half of the volunteers had raise their hands.
Of course, this wasn't really a test of the volunteers sense of smell, it was a test of their suggestibility. The bottle of green liquid was in fact nothing more than a mixture of water and an odourless colouring. Through the power of suggestion and expectation, the volunteers imagined the peppermint smell.
Was this what was happening in the disused courtroom in Nottingham? Was the power of expectation causing the group of ghost hunters to experience smells that simply weren't present? After all, I was in the middle of the room and people surrounding me in all directions were picking up on it, were they simply more suggestible than me?
The American parapsychologist, James Houran, says that suggestible people on a ghost hunt are more likely to experience not just audio hallucinations, but a whole list of experiences that they might interpret as paranormal phenomenon.
He speculated that if suggestible people are in the sort of scary-looking locations where ghost hunts are hosted, they may be in a hyper-vigilant state and attribute the subtlest of signals to ghostly goings-on.
These perceived experiences are likely to cause the ghost hunters to become more aware of their surroundings and exhibit even greater hyper-vigilance, resulting in them picking up on even more of the otherwise mundane things happening around them. It's like a self-fulfilling prophecy.
Of course I can't rule out a paranormal explanation at the Justice Museum. It's possible their was a supernatural trigger to this shared experience. Did the first ghost hunter really smell the phantom scent of a long-dead defendant in the dock? If so, her talking about the experience aloud might have been all that was needed to plant the seed of expectation in the other ghost hunters' heads.
Perhaps they did all smell a lavender perfume as a spectre walked around the courtroom close to each of them. This spook might have avoided me in the centre because my aftershave had worn off.
It's also just as possible that the first guest imagined the smell or picked up on a fleeting whiff of something else. It could have even been lavender she was smelling, but even still, it's a leap to conclude that the smell of lavender must be a lady's perfume. It could just be lavender.
Tags:
ghost huntsparanormalgalleries of justice