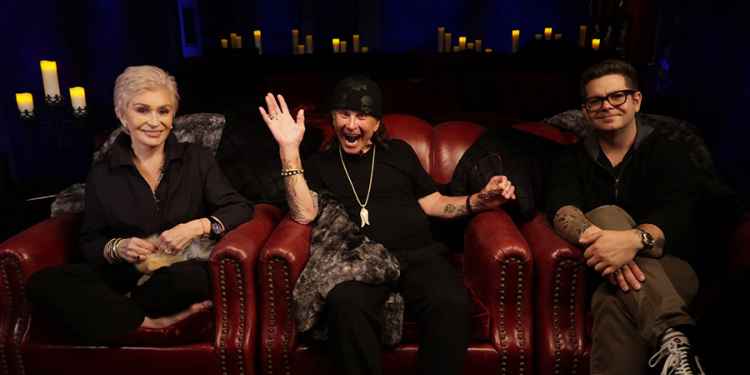 Television ghost hunter Jack Osbourne has roped his parents into appearing alongside him on his latest paranormal show as he tries to convince Sharon and Ozzy that ghosts exist.
'The Osbournes Want to Believe' starring Jack, Ozzy and Sharon Osbourne premieres in the US on the Travel Channel on August 2 at 10pm ET. There's no word as yet about a UK date for the series but it's likely to appear on Really in the coming weeks.
The "caught on camera" show follows hot on the heels of 'Watching With The Osbournes' which was shot during the coronavirus lockdown and saw Jack getting his legendary parents to watch an episode of his ghost hunting show, 'Portals To Hell'.
They might be known as the first family of darkness, but when it comes to the paranormal, legendary rocker Ozzy and his wife, 'The Talk' co-host Sharon, were left unconvinced after watching their son with his on screen co-host Katrina Weidman.
Jack has now taken it upon himself to convert them into full-fledged paranormal believers in a new eight-part series. Jack reunites with Ozzy and Sharon to share the craziest, most jaw-dropping videos of supernatural activity ever caught on camera. But the question still remains if the Prince and Princess of Darkness will see the light when it comes to the paranormal, or if they think it’s just another ride on the crazy train.
"My parents have always lived on the edge, even when it comes to believing in the supernatural," said Jack. "I'm convinced they just haven’t seen enough evidence, so I'm making them watch the most undeniable footage caught on camera, including a few from my own personal experiences. My biggest challenge may be keeping their comments family friendly. It will be a classic Osbourne gathering."
During each hour-long episode, Jack will reveal a series of mind-blowing paranormal clips from the great beyond for his parents, Ozzy and Sharon, to witness. From Bigfoot to UFOs, poltergeists, creepy dolls and unexplained apparitions, the couple will review – and critique – each caught-on-camera moment, a compilation of Jack's favourite pieces of evidence. Not ones to shy away from honesty and humour, there’s no shortage of fun, antics and lively commentary in the Osbourne screening room.
In the series premiere, Jack shares video footage of poltergeists, haunted dolls, UFOs and unidentifiable beasts that leaves Sharon and Ozzy – and their dogs – barking at the moon. Their outrageously funny reactions include Sharon’s love for 'Harry & The Hendersons', Ozzy’s historical digressions on Greeks, Romans and the berserkers and a copious amount of swearing – another day with the First Family of Darkness.
Join America's favourite tell-it-like-it-is family as they examine jaw-dropping paranormal videos in 'The Osbournes Want To Believe', coming to the US Travel Channel on August 2 and the UK's Really channel later this year.
Tags:
paranormaltelevisiontopicalthe osbournes