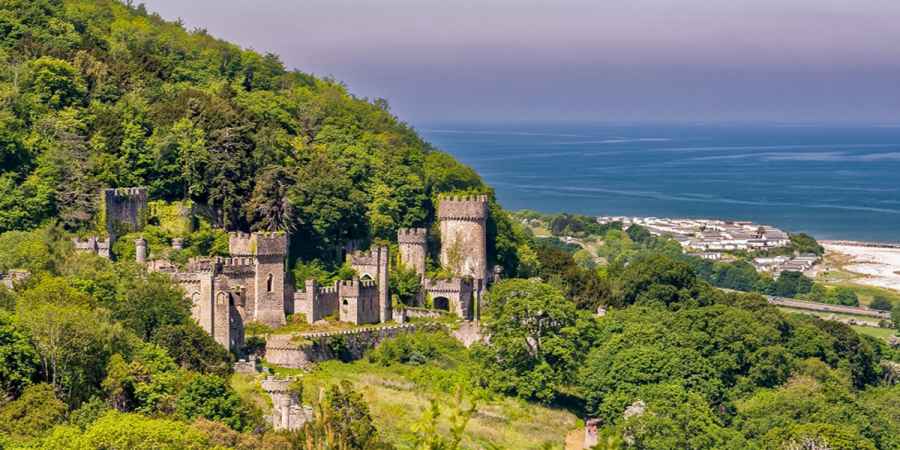 According to long-standing local rumours, the ruins of Gwrych Castle near in North Wales are notoriously haunted. The castle was built between 1812 and 1822 and is set amongst 250 acres of grounds overlooking the Irish Sea and its name means "Hedge Castle" in Welsh.
According to local paranormal investigators and the castle's staff, the ruins are definitely haunted. A duty manager getting ready to lock up for the night said he was terrified by unexplained sounds in the 200-year-old derelict castle, "I heard the chain on the main gates rattle slightly and then the footsteps began to advance towards me. It was pitch black on the Main Terrace, and I was waiting for the electrician to finish in another part of the castle so I could lock up. The footsteps grew closer and closer... and then came to a dead stop about a foot in front of me. Barely able to take a breath, I got out my phone and flashed its torch, but there was nobody there."
The castle's most famous ghost is believed to be the spirit of a former owner, the Countess of Dundonald. Some say that she was buried in unconsecrated ground and has come back to haunt her husband after he took all of her valuables. Staff and visitors to the castle have reported seeing her in the form of a floating apparition wearing a white dress, most frequently in the Countess's Tower, which is said to be one of the most paranormally active parts of the ruins.
As well as regular sightings going back as far as the 1950s, the White Woman may have also been caught on camera in a photo taken by a businessman who was visiting the castle in 2010 with a view to buying it. The photo shows the pale figure wearing a white dress looking out of a window. What makes the photo so creepy is that the floorboards had rotted away in the area the figure is stood in, the banqueting hall, making it impossible for a living person to be standing there.
The castle is also allegedly haunted by a Lady in Red who is said to have been killed during a fox hunt, and the spirit of a servant girl who died following an accident while horse riding in the grounds.
The presence of a former caretakers, gamekeeper, dairy maid and other household staff have also been reported, and in certain parts of the grounds dogs are often spooked and refuse to go any further.