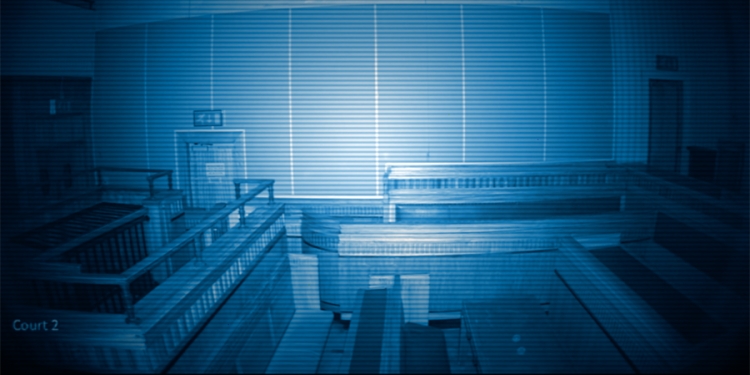 Paranormal sleuths who are currently staying safe at home due to the coronavirus outbreak are being given the chance to search for spooks at one of Lancashire's creepiest paranormal hotspots.
Events company, Most Haunted Experience (MHE), normally run regular ghost hunts at the eerie and allegedly haunted abandoned old police station and courts in Accrington, but with the country in lockdown the team have upgraded the cameras at the deserted urban lockup to let armchair ghost hunters spot spooks from their own homes.
The grade II listed building, is situated on the edge of Accrington town centre and was previously jointly used as a magistrates court and police station by the Accrington division of Lancashire Police. More recently it's been used as a venue to host public ghost hunts by MHE, an offshoot of the long-running British paranormal television show fronted by Yvette Fielding.
While guests are unable to attend ghost hunts, the MHE team have been looking for novel ways to keep their attendees entertained at home, having already given 100 members of the public the chance to take part in a mass online table-tipping experiment hosted on the video conferencing platform, Zoom.
Now the team have turned on four high definition night vision cameras placed in active location throughout the former Accrington police station. For a very small fee those who want to witness the paranormal activity in the building can access the live video streams from the lockup 24/7 on the Most Haunted Experience website.
Viewers can switch between four live cameras with audio, which have been placed in never-before-seen rooms with reported paranormal activity plus some of the company's guests' favourite areas of the building that was vacated by the police in 2016. The station is now used exclusively by MHE for their ghost hunts, and meet and greets with the celebrity ghost hunters, until the government's coronavirus restrictions temporarily halted all events.
The cameras are located in the haunted holding cells, the building's empty lobby, and now-disused court room two. A forth camera is rigged up in a room watching over a paranormal experiment. Some old keys and hand cuffs have been placed in front of the camera as "trigger objects". The hope is that any spirits that might be present in the building might be tempted to move these familiar objects, and of course if they do the moment will be seen live on the cameras.
The permanent interactive cameras allow viewers to move around the room and even zoom in on the four different views. The cameras are available to watch on desktop or mobile devices, and can look great on a large television for extra clarity.
The cameras will give fans of all things odd the chance to get a much-needed paranormal fix from the safety of their own home. Viewers will be encouraged to watch the static cameras and look out for anything strange occurring while the building is in lockdown and beyond.
You can even download your own ghost cam log book from the website to record any potential paranormal activity you witness while watching the live feeds.
The new cameras will run alongside an existing live camera feed from the building which consists of a multi-view showing four lower quality cameras, only one of which had sound. This lower quality, less interactive stream is still running 24/7 on the team's YouTube channel for free.
If something odd is caught on camera, it wouldn't be the first time. Just last month an eerie clip was captured on the building's old cameras which left believers and skeptics alike scratching their heads. In the black and white night vision footage, the camera which had been placed on a tripod, can clearly be seen to begin to shake before spinning to the right, as if something didn't like being watched by the device.

I'm in absolutely shock..
No one can get to that camera without being seen on other cameras..
Camera is on a tripod..
The building is empty..
Captured at 2233 tonight..
Accrington Police Station and Courts..@Yfielding @realkarlbeattie @OnlyMostHaunted @Mostly_Haunted pic.twitter.com/4giIgZ8Zev

Of course, we know that due to the COVID-19 lockdown the building was totally empty, and the MHE team have confirmed that no one could have got to the location of the camera in question without being caught on one of the building's other cameras.
That's not the only odd thing to have happen at the abandoned police station since lockdown began. Less than a week earlier a door was seen closing on its own on another of the team's static cameras.
The paranormal activity experienced at the building is said to range from unexplained knocks and bangs through to loud footsteps disembodied voices, and slamming doors. During one investigation a small group of supernatural sleuths on a public ghost hunting event became the focus of an emergency rescue when the door of the disused prison cell they were investigating mysteriously shut and locked them in.
Accrington police station and courts' camera are live now. You can sign up and view the cameras at mosthauntedexperience.com.