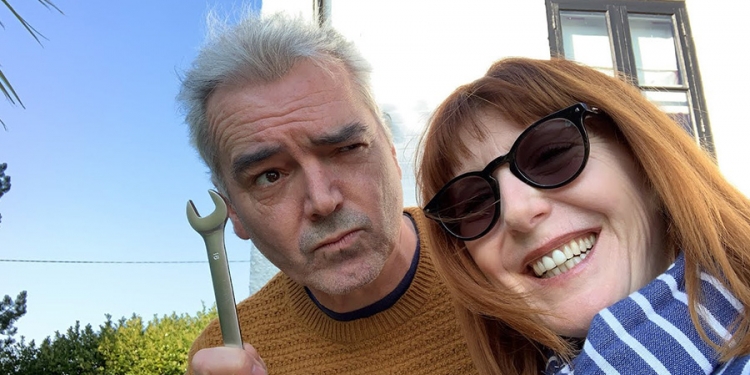 Photo: © Antix Productions
As the global lockdown due to COVID-19 continues, Yvette Fielding and her husband Karl Beattie have been trying to keep their fans entertained while they're isolating at home.
The husband and wife paranormal team are the co-creators of the long-running British paranormal show, 'Most Haunted'. Like more than a quarter of the world's population, the pair are currently self isolating at their home in Cheshire, along with their daughter, Mary Beattie.
Before the country went into lockdown, Karl tweeted fans with a promise to help those stuck at home with additional content on their YouTube channel. Karl wrote, "as the Most Haunted Experience events have been suspended due to the #coronavirus Yvette Fielding and I will be doing as much as we can to fill the void, so pop over to the Official Most Haunted YouTube Channel, there will be some impromptu lives and more Most Haunted Extras."

As the @mosthauntedexp events have been suspended due to the #coronavirus @Yfielding & I will be doing as much as we can to fill the void, so pop over to the Official Most Haunted YouTube Channel, there will be some impromptu lives & more MHExtras. Much Love x @OnlyMostHaunted

Ever since Yvette and Karl have been popping up on YouTube and Facebook with occasional live streams from around their home and beautiful garden. We've witnessed the pair showing off their green-fingered skills in the garden, or as Yvette described it, we got to see "Mr. Beattie planting his seeds" - including filling out the vegetable patch, which might come in handy if this lockdown never ends.
We've seen poor Watson, Yvette's fearless ghost hunting pooch, chasing an old wheelbarrow tyre around the garden, and some how the duo managed to turn the mundane task of repairing a bird house into an amusing comedy saga.
Yvette and Karl also gave fans the chance to get a little more intimate as they live streamed from their bed on the night Boris Johnson imposed the coronavirus lockdown.

As well as the impromptu live streams, the team have been uploading weekly online exclusive episodes that were recorded before social distancing rules came into effect. The 'extra' episodes are available on Most Haunted's official YouTube channel and feature various members of the team doing what they do best, investigating haunted locations across the UK.
So far we've seen Karl and Stuart Torevell investigate the spectacular Coats Memorial Church in Paisley, Scotland. The church is now abandoned, but some of its passed visitors seem to have stayed. The following week, the team brought viewers an investigation of a previously unseen location, Gressenhall Farm and Workhouse in Norfolk.
Last week we saw what happened Yvette sent three of the fearless team off on lone vigils. Karl spent the night at Nunnington Hall in North Yorkshire where there's rumours of a royal ghosts, Stuart climbed aboard the SS Great Britain in Bristol, and resident skeptic Glen Hunt search for the dark entities that are said to haunt Drakelow Tunnels, a network of dark and haunted underground tunnels in Worcestershire.

If that weren't enough, Most Haunted Experience, an offshoot of Yvette and Karl's long-running paranormal television show, are giving customers who might be missing going out ghost hunting the chance to take part in a mass online experiment.
The co-ordinated paranormal event will take place at 10pm on Friday 10th April and will see MHE's team and members of the public try to recreate the art of table tipping from their respective homes via webcam. More details can be found on the Facebook event page.