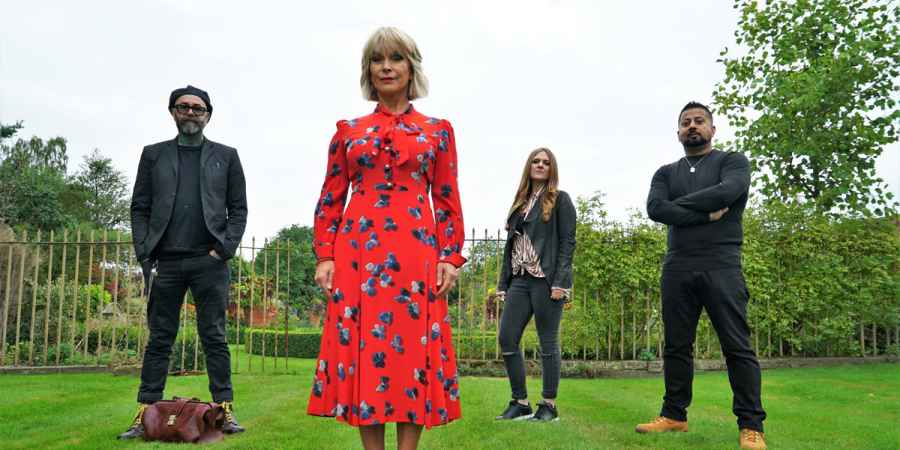 Barri Ghai, Jayne Harris and Ian Lawman head to the midlands to visit the haunted home of Toyah Willcox in the penultimate episode of 'Celebrity Help! My House Is Haunted'. The team are called to deal with Toyah's Georgian house, which is plagued by paranormal activity and harbours a hostile entity.
Toyah has had eight top 40 singles over her long career and released over 20 albums. She's also written two books, appeared in over 40 stage plays and ten feature films. She had her greatest success in the late-70s and 80s. Toyah has a huge list of television credits to her name, and even played the role of Estelle in the 2021 movie, 'The Ghosts Of Borley Rectory'.
Speaking in the episode, Toyah said, "I suppose I just want proof. I want to know it's not just me." Toyah, who's lived in the house for more than two decades said, "it is a very active house, and it has been active to my friends as well as to me."
According to the celeb, phantom children have been heard screaming in the cellar, a disembodied male voice has been heard in the scullery, and banging is regularly heard coming from the attic. Toyah said, "things move. All the time." Describing one such occurrence, she said "I was getting dressed the other day, I laid out my dress, put it on the bed, went to pick it up and it just flew out the door."
The actress and singer added, "the help I want is confirmation from the team that what I am experiencing is a physical and tangible experience, it's not just my ego or imagination." She said, "the majority of the spirits I really really like, and if they feel like they're in the right place at the right time, then they're welcome." But she adds, "if they're evil, they can f** k off."
The show's dramatic narrator tells us, "medium, Ian, goes into the investigation with no prior knowledge, using just his psychic abilities to pick up information about the case." However, this isn't the case in this episode as Ian does have prior knowledge after investigating the house in a 2008 episode of 'Living With The Dead'. In fact the incident that Toyah describes involving actress Rula Lenska passing out occurred on Ian's previous visit.
In fairness to Ian, he might have been genuinely unaware where he was going at this point. So, as always he had to rely on just his psychic insight. He said, "I feel we're going into a location where it's been several uses over the years." 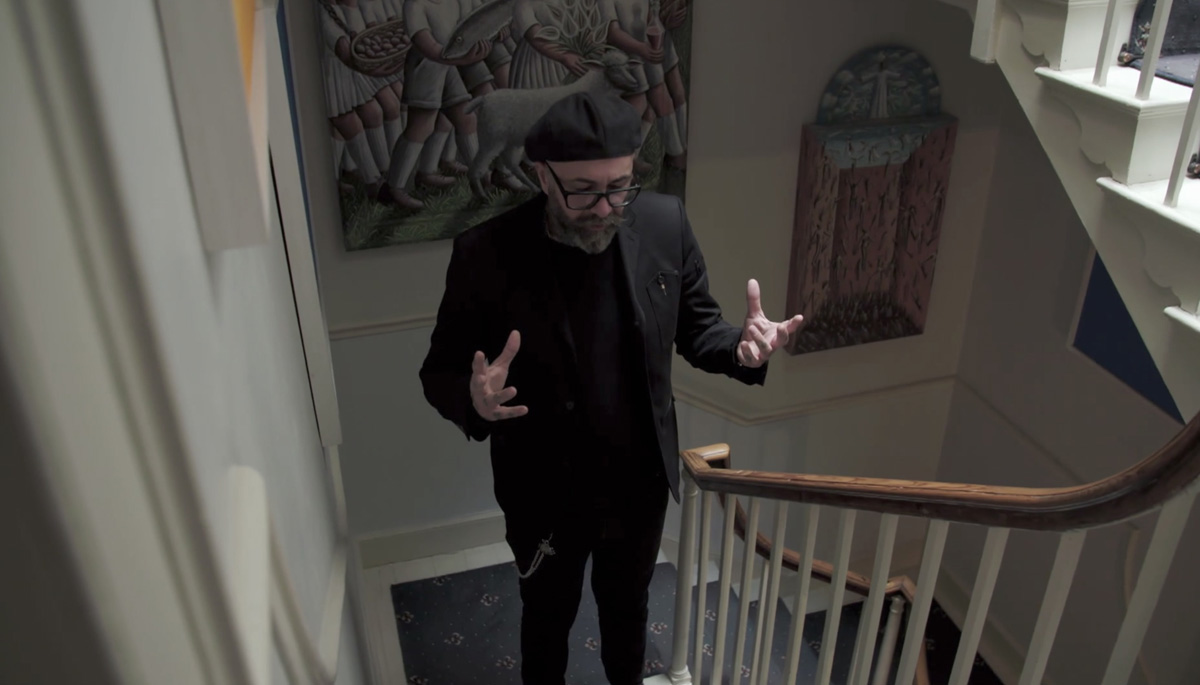 As Barri and Jayne headed off on their own fact-finding missions, Ian entered the house alone in order to conduct his psychic sweep. Upon entering the house he said he was aware of an energy in the hallway. He said, "as soon as I walked through the backdoor, my heart was racing." He said the area has links with a female energy.
While downstairs, a coat hanger fell from a coat hook. Ian said that he felt this meant someone was trying to get his attention, so he wanted to go upstairs to check. It's not clear why the event downstairs enticed him upstairs. It was actually less like something got his attention and more like something drove him away.
As Ian climbed the stairs he became aware of the sounds of laughter, as well as the sound of rattling crockery and the smell of baking.
In Toyah's bedroom, Ian saw the vision of a lady in a bonnet walking into the ensuite bathroom. The psychic said, "this bedroom would have been used for something else, and the fact that I could hear cups and saucers, indicated to me that this could of been some form off... not a restaurant, but something very similar to that. Almost like a tearoom."
Ian says that because of its former use as a tearoom, there was a high probability that poltergeists would move things from the bedroom. He says this is because the spirits have seen people using energy to pick up knives and forks, and cups and they copy them. It's a bizarre claims since it's hard to imagine any room that doesn't have a history of people picking things up, but perhaps in a tearoom there's more picking up of things than say in a bedroom?
When Ian later walks down to the cellar, he feels an immediate change in the atmosphere, he said that part of it feels quite negative. Touching the stone walls, Ian said he could hear what he described as chanting or choir music. He said, "that tells me that this stone has travelled from a different location to here."
In the attic, Ian said he felt hot and breathless, and picked up on an overwhelming number of different energies outside in Toyah's courtyard.

Jayne Meets A Local Historian To Find Out More 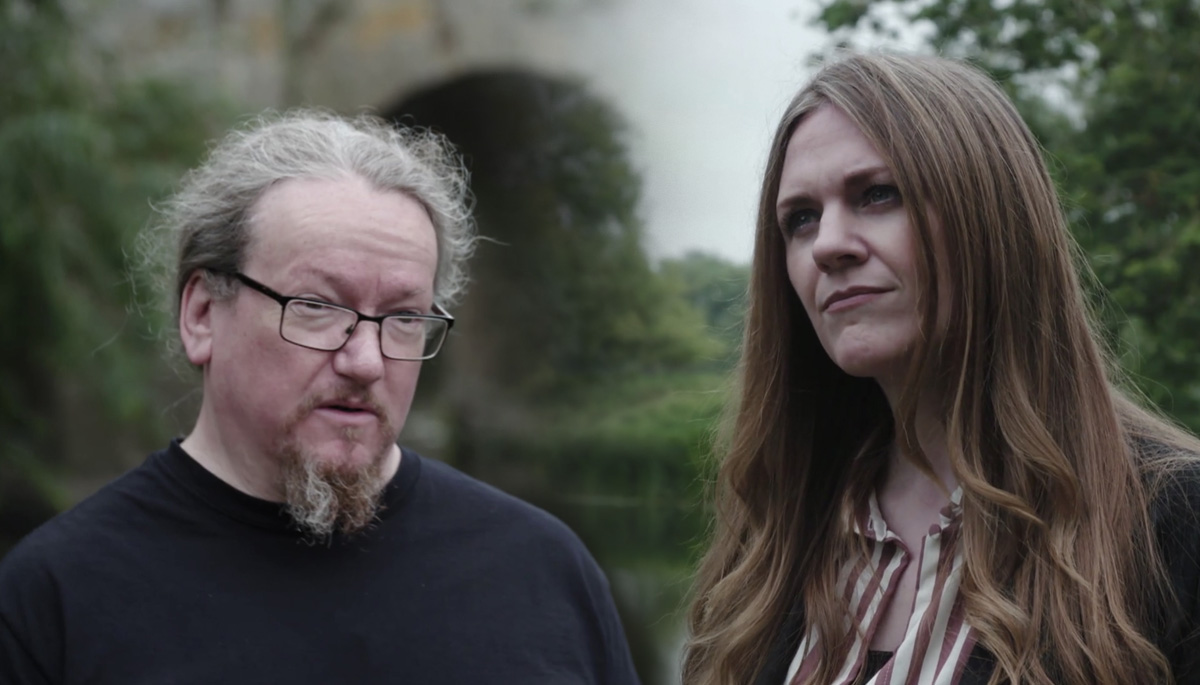 To find out more about the history of the area and the case, Jayne met up with local historian, Brian Hoggard near Pershore's medieval bridge, the scene of several fatalities during the Civil War.
Brian tells Jayne that some of the stone from the original parts of Pershore abbey that were taken down during the dissolution of the monasteries could have ended up being used to build some of the older parts of Toyah's house, namely the cellar. This of course backs up what Ian had felt on his walk around.
Meanwhile, Barri had gone to meet Mark, Toyah's friend and hair stylist, who had a very personal experience in the house. He told Barri, "we all went up into the loft, and I got this tremendous heavy feeling and this feeling of sick, and then I started sort of shaking, and it turns out there was a spirit up there that needed releasing that was trying to come through my body."
Mark said he started to feel the unusual sensation as he started walking up the stairs to the attic. Barri says, "that's almost like possession." Mark said, "I felt quite violated, and it was just the most unusual feeling I've ever had." 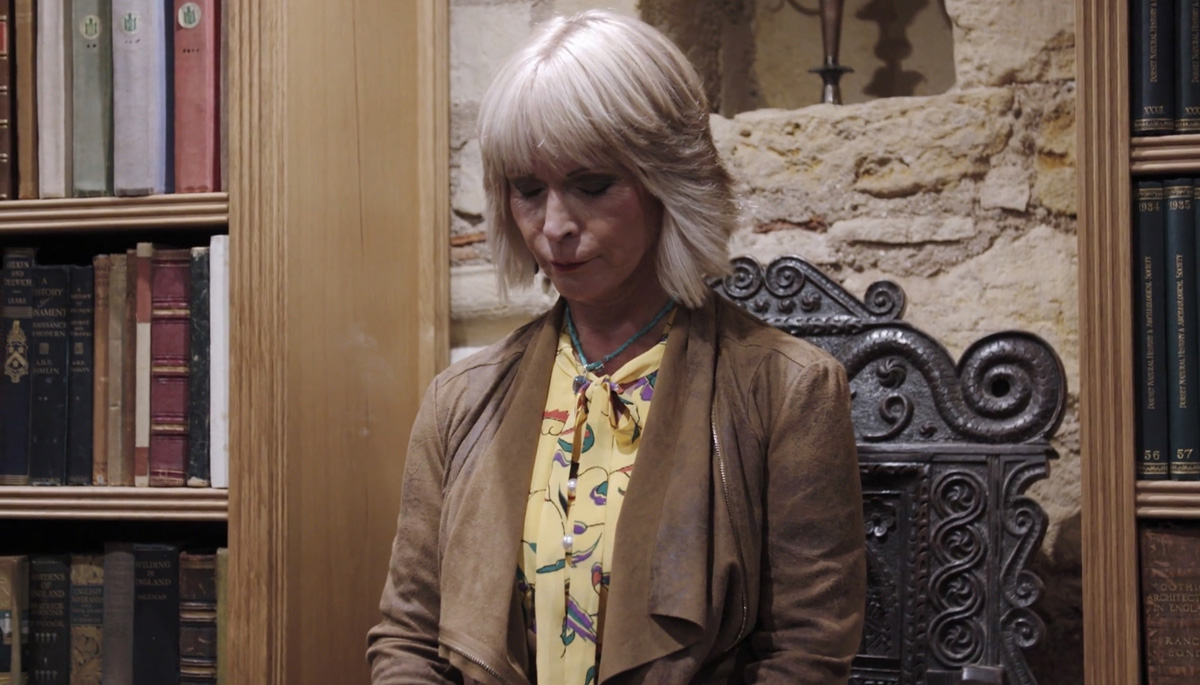 After completing their initial investigation, the team re-group at the house to talk through what they've found out and put a plan together. Toyah confirms something that Ian had picked up on. She told the team that the house used to be Willow Cafe.
The team then get stuck in and start by inviting Toyah to join them for a "spirit trigger" session, where they hope that Toyah's presence will stir up the ghostly activity.
They began together in Toyah's salon on the first floor where they were using an audio recorder in an attempt to capture EVPs. An EVP, or Electronic Voice Phenomenon, is a form of spirit communication that involves capturing the sound of spirit voices in audio recordings, but the experiment didn't last long as the team immediately felt they were being pulled elsewhere and moved down to the scullery, where they seem to capture a very negative EVP.
The session also included a regression in the cellar, where Toyah became one with her house and was able to sense the male spirit of a Civil War soldier who was hiding in the room. Jayne said, "it's a brilliant lead for us actually now going forward in the investigation, because we now think we know the identity." 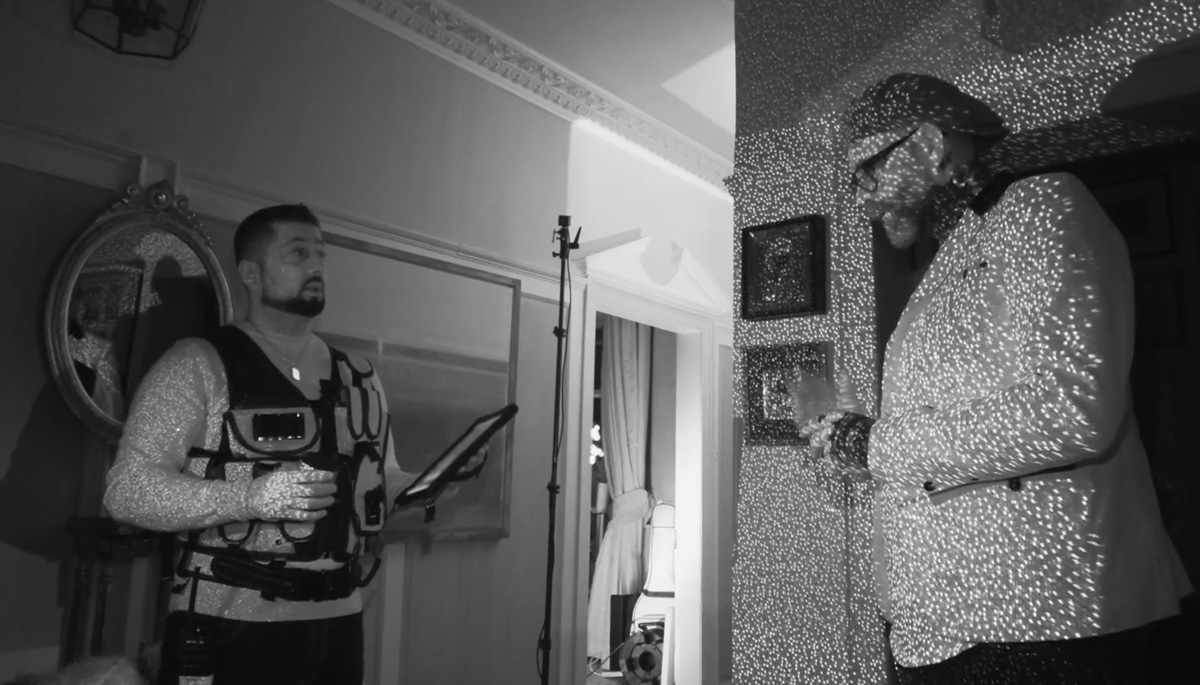 Toyah left for the night, leaving the team locked down inside the house. Jayne suggested that they begin their investigation in the hallway and try to find out more about the energy that threw the coat hanger earlier, despite the fact Ian had felt this energy had been trying to draw him upstairs.
Jayne was using an SLS camera, a type of camera that uses 3D mapping technology to detect human shapes and highlights them on its screen in the form of a stick figure. At one point Jayne said such a figure was flashing up on the screen, but nothing solid formed.
Barri was using an app called EchoVox, which is pre-loaded with the phonetic sounds that make up every English word. The app randomly spews out these sounds and it's believed that spirits can affect the random nature of this app in order to form the words they are trying to communicate. At one point they heard what sounded like a female voice coming through and a reply that seemed to give the name Lucy, and moments later what appeared to be an aggressive male's voice.
They moved up into Toyah's bedroom, where Jayne immediately thought she saw the figure of a female in a flowing dress. They switched to use a spirit box, a ghost hunting device which rapidly scans through radio frequencies. It's believed that spirits can manipulate the white noise in these frequency ranges to form words and sentences. They had a few sounds through the device, some of which they thought sounded like meaningful responses, but the replies weren't clear on television.
They then move up to the attic, an area the proves too much for one member of the team. All of a sudden Barri started choking and struggling for breath. Jayne called out, "who ever's doing that, can you move away please?" Barri made a dash for the stairs, saying "something just grabbed my wind pipe" as he went.
After the incident he said, "I couldn't get a breath in, that's what scared me. I thought I was going to die. I actually thought I was going to die." Of course, this experience in many ways mirrors what Toyah's friend, Mark, experienced in this same room of the house. Ian also picked up on this during his walk around.
Despite their scare, the team push on with their investigation and gather what they deem to be several clear responses from the spirit world asking for help. The team obliged and the night ended with the team trying to move on the trapped spirits. While Ian blessed the house and spreads holy water, Jayne attempted to drive out any negative energy by burning sage.
There was no mention at any point in the episode that Ian had been to the property and investigated with Toyah before. It might be that the production company who make the show were unaware Ian had visited before and since he's not told in advance where he's going, they may not have realised this until it was too late. The fact he'd been to the house before didn't affect the investigation in any way, but perhaps Ian should have been a bit more upfront about it. Implying that he didn't know who lived there until it was revealed to him after his walk around has the potential to damage a core part of the show's format.
The investigation of Toyah's house is available to watch on demand on Discovery+ now, with the final episode of 'Celebrity Help! My House Is Haunted' dropping next Friday on the streaming platform. 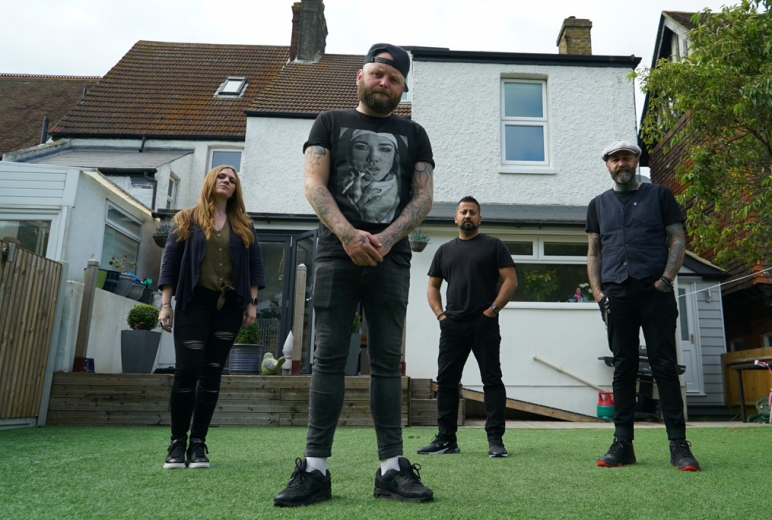 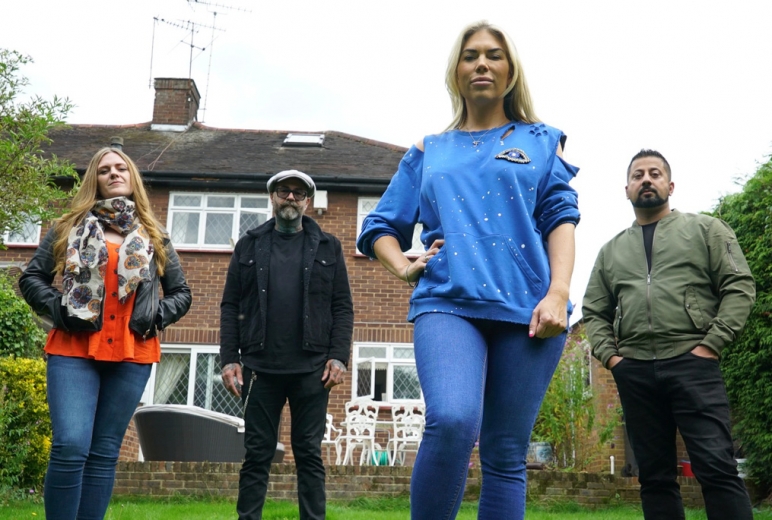 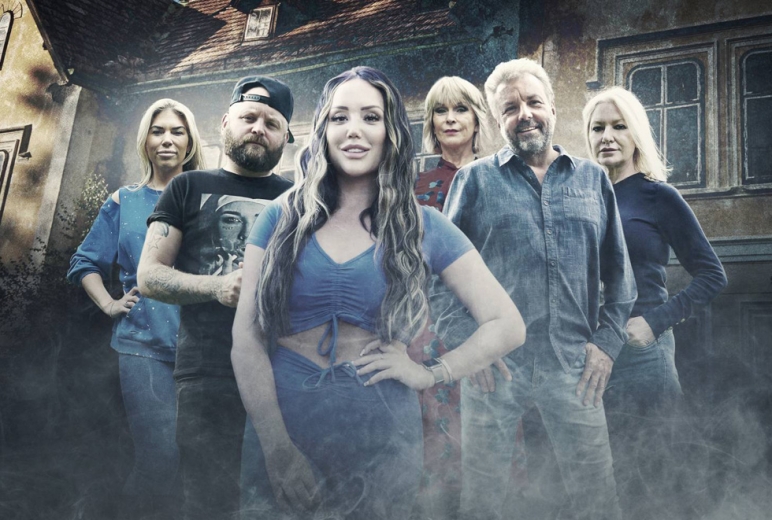