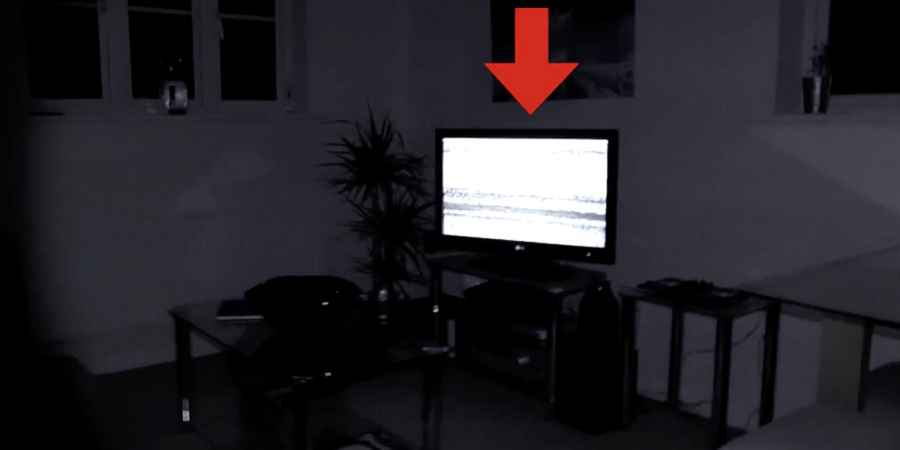 The huge creepy YouTube channel Chills recently uploaded a video called '12 Scary Ghost Sightings You Won't Believe' and the channel's 5.5 million subscribers shouldn't have believed it, because one of the videos was faked by us.
We created the clip three years ago as an experiment just to see how easy it was for a fake paranormal video to get circulated and treated as real online, despite not being able to determine whether it is or not from the clip.
We called the video 'Real Haunted House Footage' and added the following caption to the relatively anonymous YouTube upload: "A video which was submitted to us, the guy shot this two minute video during a walk around his house on a very active evening. If real, the video seems to show banging, poltergeist activity and even a partial manifestation."
Over the three years the video has been live it has attracted a pretty low number of views, just over 7,000 in total. While some weren't convinced, questioning why the lights were off and other giveaways to its lack of authenticity, others who have viewed the clip have been convinced by it.
One commenter wrote, "holy s**t that was real," another said "always been sceptical about paranormal stories, but this is different because of the things on here I can't explain."
Then it seemed we fooled the king of ghostly videos on YouTube, Chills, a curator of all things terrifyingly creepy. Our clip made it to number nine on the list, despite us telling Chills up front that "it's fake so I wouldn't want to intentionally mislead your viewers by showing it out of context and claiming it's real. I'll leave it up to you..."
Chills did knowingly run the fake clip and referenced the fact that it wasn't genuine paranormal activity in the video. He said in his slow recognisable voice, "this creepy video looks convincingly paranormal, but when I emailed to find out more, he told me that they've since discovered the video was a fake."
Chills adds, "an important lesson to take away from this video is not to be immediately fooled by a high resolution ghost sighting." The YouTuber admits that he was at first fooled by the clip, but he's also unable to correctly explain away what he has seen in the video.
In the video's narration, Chills states, "apparently a second person was walking around making the knocking noises and turning on the television." However, this was not the case and is not how we made the video. The video was filmed by one person who was alone.
At one point a creepy shadow figure walks past a door way. Chills assumes this is a second person in the clip, but it's actually the same person who is holding the camera throughout the rest of the video, there's just some clever editing which allows him to lock the camera in position and step in front of the camera himself.
Chills analysed this part of the clip and incorrectly said, "as for the shadow figure sighting, notice how they never check this side of the room door. Their friend must have been hiding in the corner where they never looked." There was no one behind the door, there was no one in the room by the time the camera entered it.
This just goes to show how easy it is to fool people with a fake video, which was our intention. Although Chills knows the video is a fake, he can't explain how what looks like paranormal activity has been pulled off.
Chills said, "don't feel bad if you were fooled, because I was too." But it wasn't just the YouTuber who got sucked in. Many of his subscribers did too, despite the fact it's made clear in the video that the clip is fake.
The comments below the video read, "[it] was either a poltergeist or a phantom because the clip of the shadow figure was floating," while another admitted, "I was convinced [it] was real now feel like a right tit."
Perhaps more deservingly topping the top 12 was a clip from our friends at Paranormal Hauntings. Charlene and the team were exploring the abandoned Ye Olde Harrow Inn where they caught an unusually high amount of orbs on camera, as well as what sounded like strange disembodied voices heard through their ghost hunting gadgets.
Tags:
youtubeparanormaltopical