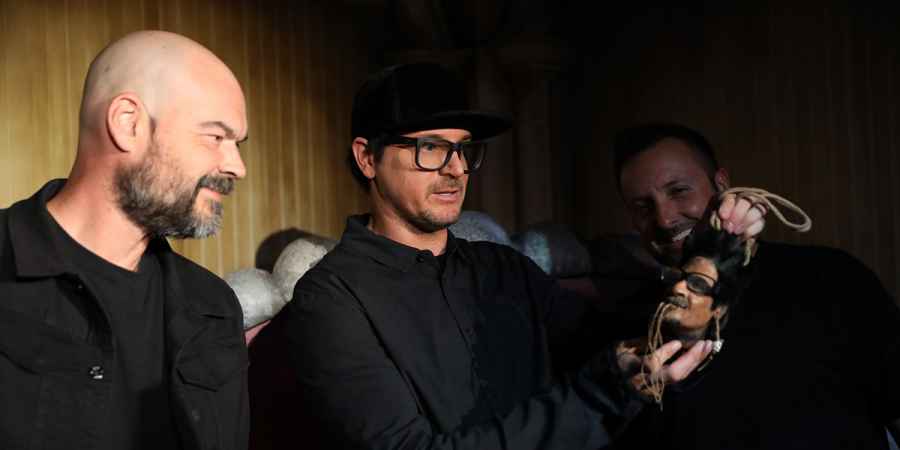 Zak Bagans leads the first paranormal investigation of the infamous Cecil Hotel in Los Angeles, a paranormal hotspot that has long been on Zak's bucket list.
The US Travel Channel, home of paranormal television shows like 'Destination Fear', 'Portals To Hell' and of course 'Ghost Adventures' has announced that they'll be launching their new streaming service, Discovery+, in America on January 4.
The new service allows fans of ghostly entertainment to catch up on their favourite shows, as well as binge watch box sets of more than 50 original titles and over 150 hours of exclusive content.
To launch the platform early in the new year, Discovery+ is treating fans of the paranormal to the premiere of Zak and the teams' latest special at the Cecil Hotel.
The hotel has a sinister reputation with connections to the infamous serial killer, Richard Ramirez, and as the place were actress Elizabeth Short was murdered. The hotel is even the inspiration for 'American Horror Story: Hotel', plus has seen more than its fair share of suicides, deaths and violence.
Perhaps the best-known story of strange happenings at the hotel is the sad case of Elisa Lam. She was a 21-year-old student, her family descended from Hong Kong and moved to Canada. In 2013 she went on a tour of Southern California, but soon after checking in to the Cecil Hotel, Elisa was reported missing and her body was later found sealed in a water tank on the roof of the building.
What makes Elisa's case all the more strange is the unsettling CCTV footage released by police which showed Elisa's last few minutes in the hotel. The footage from the security camera in the hotel's elevator show Elisa acting very strangely in the time leading up to her death.
Zak said, "it doesn't get bigger and more sinister than this, we've been trying to get inside these rooms for more than a decade, so this is really a big deal — the first-ever paranormal investigation in the Cecil Hotel. It has a dark history and reputation, and it's one of the heaviest places we've ever been in."
Discovery+ will launch in the US on January 4. As well as bringing viewers the best paranormal shows from the Travel Channel, the service will also stream shows from other channels, including A&E, Lifetime, TLC, History, Animal Planet, Food Network and HGTV.

Discovery is launching their streaming service #discoveryplus on January 4th, where we will present a 2-hour Special investigating the infamous Cecil Hotel where the mysterious death of Elisa Lam sent shockwaves throughout the world. Stream exclusively Jan 4th on #discoveryplus pic.twitter.com/wOy1rv7OgZ

Meanwhile, here in the UK Discovery+ launched in early-November. The platform brands itself as a "real-life entertainment streaming service for UK and Ireland." It is the place to watch the latest episodes of 'Ghost Adventures' for free, but a premium subscription tier now gives British viewers the chance to see US shows before they air on Freeview here in the UK.
British fans of GAC were able to watch 'Ghost Adventures: Horror at Joe Exotic Zoo' just a month after the Halloween special aired in the US thanks to Discovery+. In comparison, 2019's Halloween special was shown in the UK a year after its original broadcast.
However, there's not yet any word on when 'Ghost Adventures: Cecil Hotel' will stream on Discovery+ in the UK. It seems like the perfect opportunity to simultaneously premiere an episode on both sides of the Atlantic for the first time, but since the episode is not yet being promoted in the UK, Brits may have to wait until later in 2021 to see the investigation.
Although the cross-platform service gives viewers free access to watch live television and 30-day catch-up from the free-to-air channels, the exclusive premieres require viewers to purchase an Entertainment Pass that gives them access to content from Discovery's premium television channels.
The Entertainment Pass will also give viewers access to extensive box sets and complete back catalogues of some of the network's most-loved shows.
Discovery hopes the new service will become the ultimate destination for captivating factual, lifestyle and reality content that will be loved by followers of the paranormal, as well as fans of food, homes, motoring, adventure, weddings, true crime and more.
In the UK, Discovery+ will be available free of charge to Sky Q customers for 12 months. Once the 12 months is over, Sky customers will be able to add discovery+ directly to their bill.
Tags:
televisionzak bagansghost adventuresparanormaltopicaldiscoveryplus