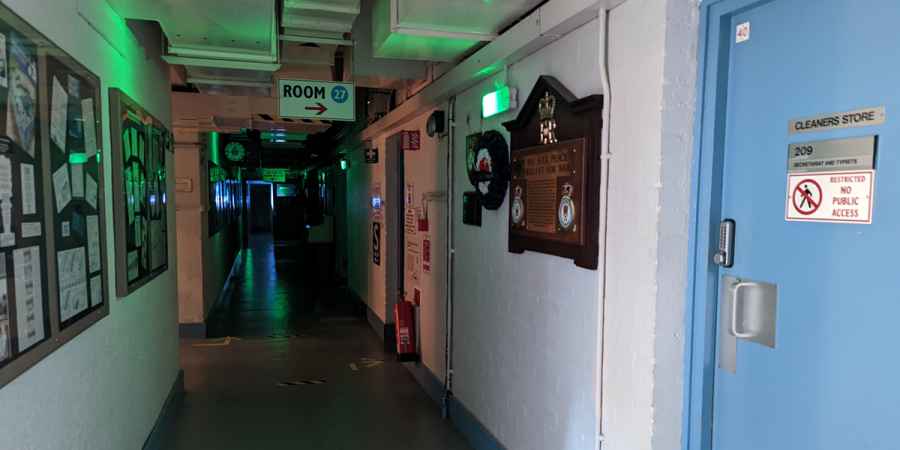 At the weekend, subterranean spooks awaited me as I headed below ground to hunt for Cold War-era ghosts in a former top secret nuclear bunker in Cheshire with Britain's best-known ghost hunter, Yvette Fielding.
The public ghost hunting event was hosted by paranormal events company Most Haunted Experience (MHE), a spin-off of the long-running television show hosted by Yvette.
I was joined by around 40 other members of the public who were all eager to experience paranormal activity at the Hack Green Nuclear Bunker in Nantwich. The two-level, reinforced concrete building was constructed in the 1950s and was used as a Regional Government Headquarters until 1992.
The bunker is now a museum, but guests have reported paranormal activity, including seeing the apparition of a young woman in the bunker's former telecommunications area, a man dressed in period uniform roaming the main corridors, and intense feelings of unease.
Yvette is no stranger to the bunker, having investigated twice during the 20-year history of 'Most Haunted', once in the 2008 series of the show and for the spin-off series 'Most Haunted: Midsummer Murders' in 2007, when Yvette was joined by psychic medium David Wells.
Although the long summer days meant it was still light outside, inside the windowless bunker we were in the dark and completely cut off from the outside world when we were split into teams and head out to investigate this fascinating Cold War relic.
The group of roughly 20 people I was with started out in a room which was formerly an administrative area on the bunker's upper floor. Today this room is the museum's main display room. In my torch light I could make out various radiation detection equipment and biohazard suits in glass cases. In front of me was an array of nuclear weapons, including mock ups of Trident missile warheads.
Guided by the MHE team, we had some interesting activity in this room. I'm not normally one for ghost hunting gadgets, but a REM-Pod did seem to trigger despite the fact their was no obvious cause. There was metallic-sounding tapping coming from the far corner, and several guests seemed to be affected by a sudden cold chill. 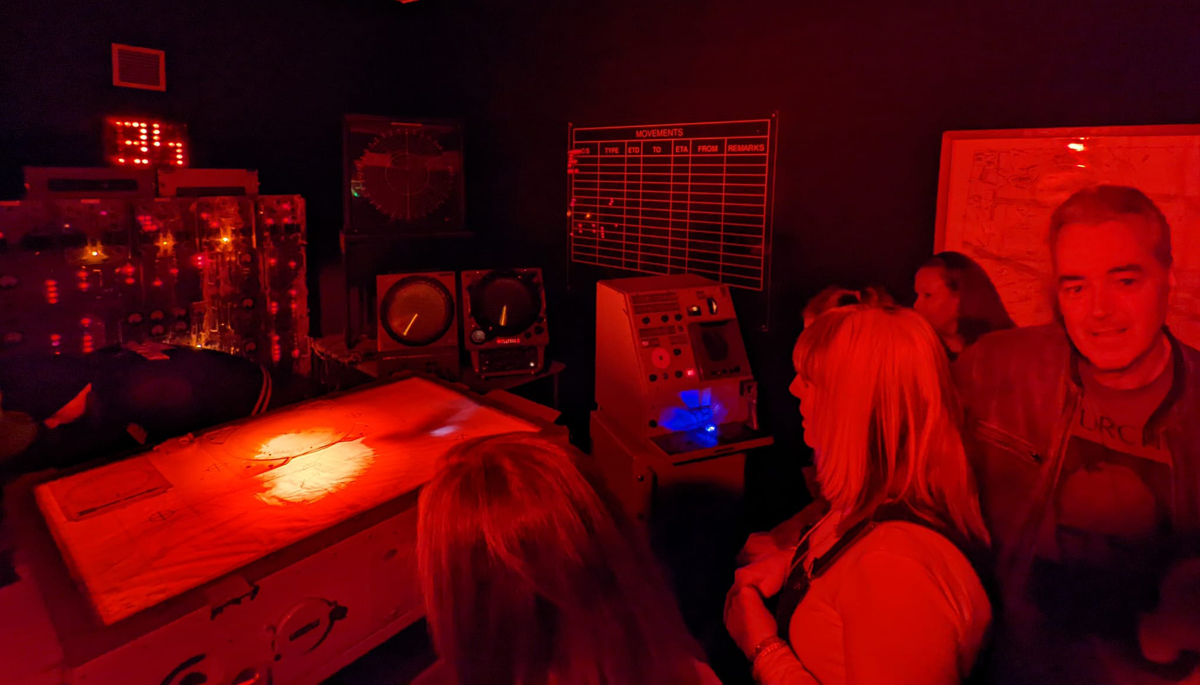 We were soon joined in this area by Yvette, along with her 'Most Haunted' co-hosts Karl Beattie and Stuart Torevell, she moved between the groups for the first half of the night.
Yvette started to call out, something that will be familiar with viewers of the show, "is anybody here? It's us again." After a pause, in which we all listened intently, she continued, "can we hear your footsteps? Can you touch one of us?" Another pause, and then, "if there's anyone here, please can you come towards us now."
After a little while, Yvette said, "I think there's something in here," and walked through to the adjoining radar room. By doing so she tripped a sensor and the room sprang to life with whirring displays and flashing lights. Over the buzz, Yvette suddenly said, "did you hear that? Did you hear breathing?" Several of the guests said that they had heard it too. This happened several more times while we were in this small room, but it was impossible to pinpoint the source of the sound. Yvette confessed, "I am physically shaking," not out of fear but because of the energy in the room.
We then split the group again, and ten of us headed off to the female dormitory at the other end of the bunker. Here we heard several odd sounds and tried our hands at a Ouija board. Four of us took a place around the board to start with, as Stuart looked on and offered his guidance. The planchette moved really fast at one point early on, but seemed to go dead afterwards. So we tried with a different set of four guests. They were able to get the planchette moving around a little, but again there were no meaningful responses. 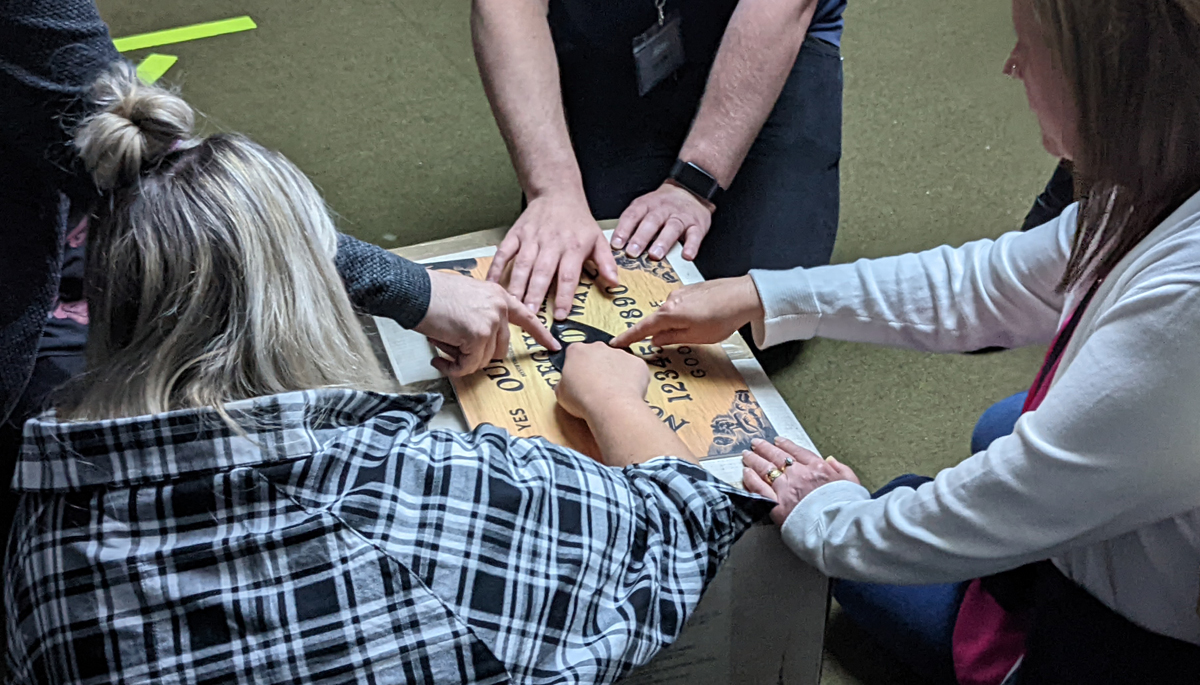 Soon it was time for a quick break back in the NAAFI canteen, which served as the base room for the night. I grabbed a quick drink and a complimentary Mcvitie's Gold bar, who knew they still exist? Then it was time to head back out into the bunker.
For the second half of the night we were on the bunker's lower floor, which was noticeably cooler. We started out at the bottom of the bunker's main stairwell. Here the spirit of a woman named Joan is said to roam after she fell to her death on the stairs in the 1940s. Apparently, it's a bit of a mystery as to whether she fell or was pushed. Yvette told us in the welcome talk that she had previously heard what she thought was Joan's footsteps while investigating this area on a previous public event.
As we called out to the spirit of Joan we repeatedly heard a high-pitched tone, it didn't sound electronic in nature but the cause of it was unknown. At times it seemed to present itself in direct response to guests' requests. Was this Joan trying to use her voice? We will never know. 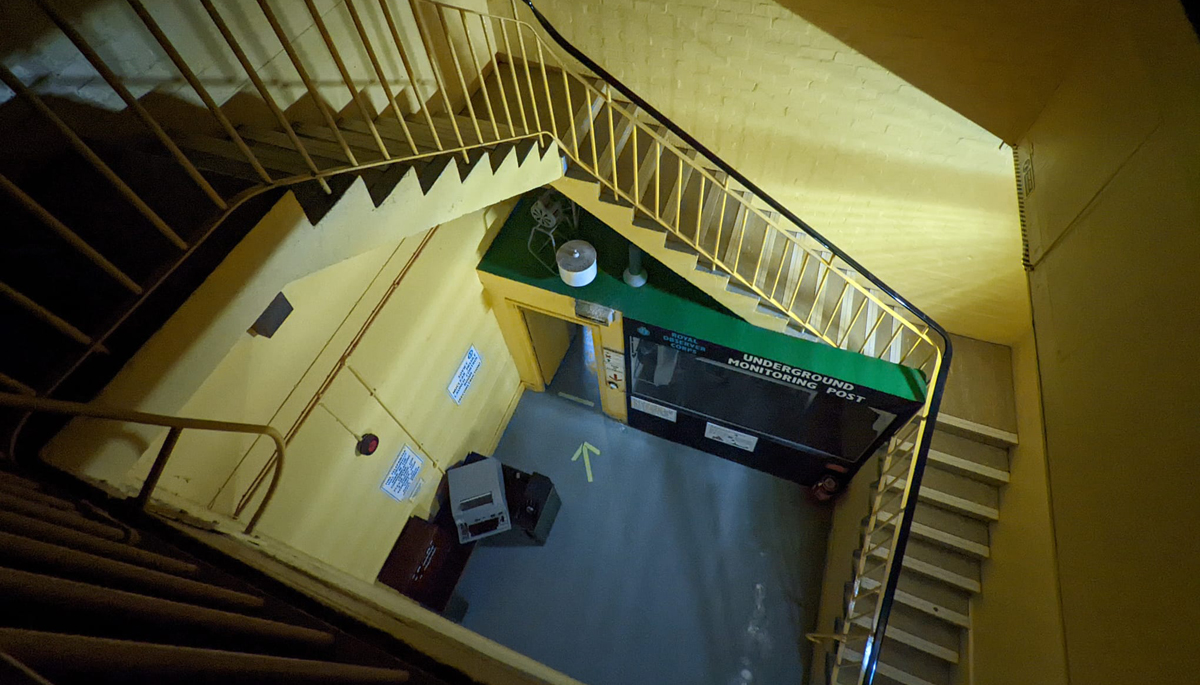 Before the night was up we also investigated the communications centre, which lead through to the old BT telephone exchange and BBC radio studio, and a room which is now used as a cinema, where in the day you can watch the chilling 1970s public information film, 'Protect & Survive' that  plays a loop.
As a lover of secret underground bunkers, it was a real honour to get to spend the night exploring and searching for ghosts at Hack Green.
Thanks to Yvette, Karl, Stuart and all the MHE team for hosting us, and for all the other guests for being good sports and making it such a fun night. If you'd like to book your own ghost hunt with Most Haunted Experience, you can find more information at mosthauntedexperience.com.
Tags:
ghost huntsmost hauntedmost haunted experienceparanormalhack green nuclear bunker