Ghost Hunting At The SS Great Britain With Most Haunted Experience

As a native Bristolian, when I saw Most Haunted Experience were hosting ghost hunts at one of the city's most iconic locations, I just had to go along. The event gave fans of the long-running ghost hunting show the chance to search for spooks in the 175-year-old passenger steamship with two of the show's stars Karl Beattie and Stuart Torevell.
Fog was hanging low over Bristol docks as we bordered Isambard Kingdom Brunel's famous ship, as over 150,000 visitors do every year, since being restored and opened as a museum. Being familiar with the boat, I can tell you the SS Great Britain is atmospheric at the best of times, but with the last of the tourists gone for the day and the lights switched off, the ship take's on a whole different character. 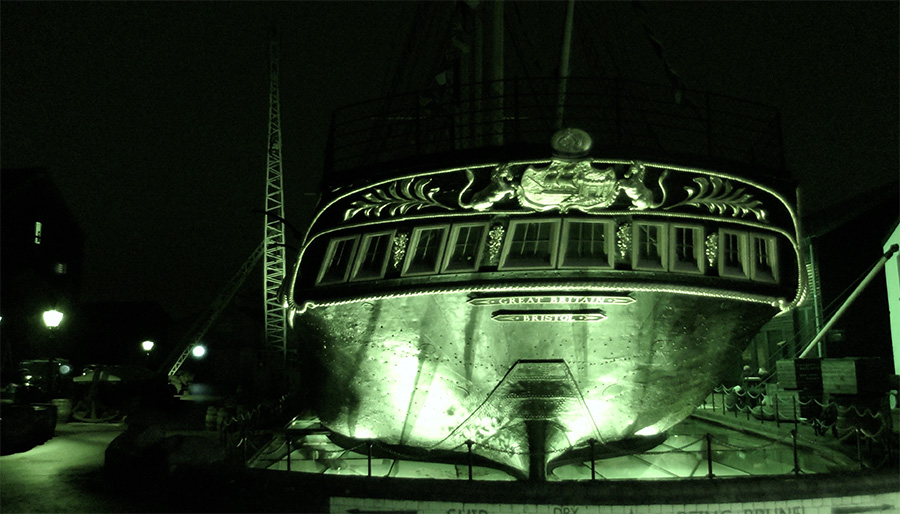 Most Haunted filmed an episode of the show aboard back in 2009. At the time Yvette Fielding described the ship as one of the top five most haunted places they'd ever visited. Not only is it one of the most haunted, but when it first set sail in 1845, it was the most advanced and longest steamship in the world.
During its 41 years of service it spent its time shipping passengers between Bristol and New York. The crossing of the Atlantic usually took around 14 days, so with so much time at sea, it’s no surprise that the iconic ship has plenty of paranormal stories to tell.
The Great Britain's most re-told haunting is that of Captain John Grey, who vanished one night after falling ill during a voyage. He was never to be seen again, some say it was suicide, while others claim he was murdered for all the gold stowed away in his cabin.
Since then passengers have reportedly heard the heavy footsteps of his boots as he walked across the decks, accompanied by slamming doors opening, and even a self-playing piano.
Captain Grey isn't the only ghost to wander the decks of this famous ship, others are said to include the spirit of Mrs Cohen, who mysteriously died aboard the ship a few weeks after her wedding. There's also said to be the ghost of a young sailor who reportedly fell to his death from the rigging. 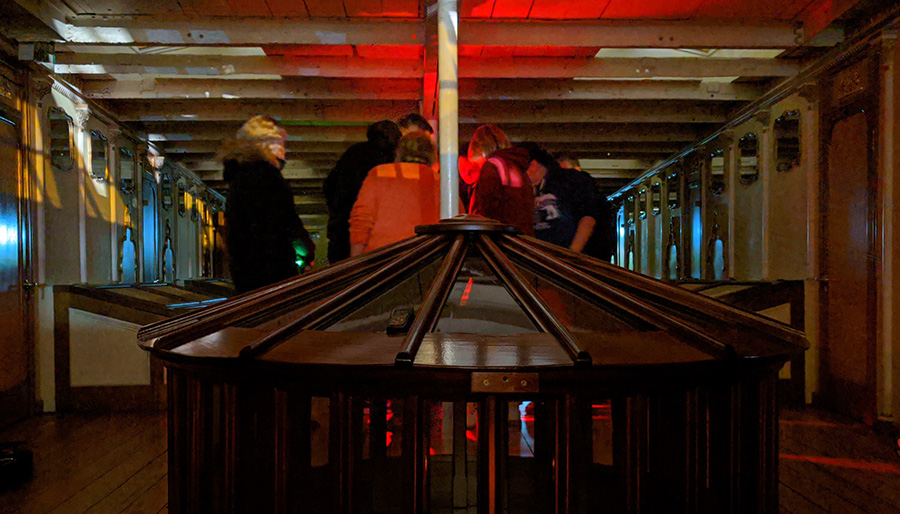 After being shown aboard, we gather in the base room where Karl and Stuart welcomed their guest and gave us an idea of what they were in for over the next four hours. After a chance to have a photo taken with the television ghost hunters, the guests were split into two teams and we went out into the boat to start the investigation.
The SS Great Britain's decks consist of wobbly floorboards throughout, which meant there had to be a good separation between the two teams. This wasn't a problem on a steamship as long as the Great Britain. One team made their way to the decks at the forward end of the boat, while we started in the first class dining saloon in the aft.
We were armed with various ghost hunting gadgets including devices that could alert us to spikes in the electromagnetic field, and every ghost hunter's favourite... cat balls. Although designed as a plaything for kittens, they are useful on ghost hunts because they can be placed on the floor and if anything touches them they light up and flash wildly.
Despite our arsenal of paranormal equipment, things started a little slow in the dining saloon, but when we moved up to the promenade deck things started to get a little more lively. While some of the group were gathered around a Ouija board attempting to make contact with the spirits of the boat, we started to hear strange knocking sounds.
Initially this rapping sounded like it was coming from above us on the top deck, but no one was outside at this point. Suddenly the source of the knocks seemed to shift and were coming from the very deck we were standing on. In fact at times it felt like someone invisible to us was walking the planks between us.
At one point the knocks seemed to be responsive and we were able to ask questions, encouraging the spirits to give us one knock to indicate "no" and two for "yes". Using this line of questioning, the knocks seemed to suggest that we were talking with four spirits, two of which were children. 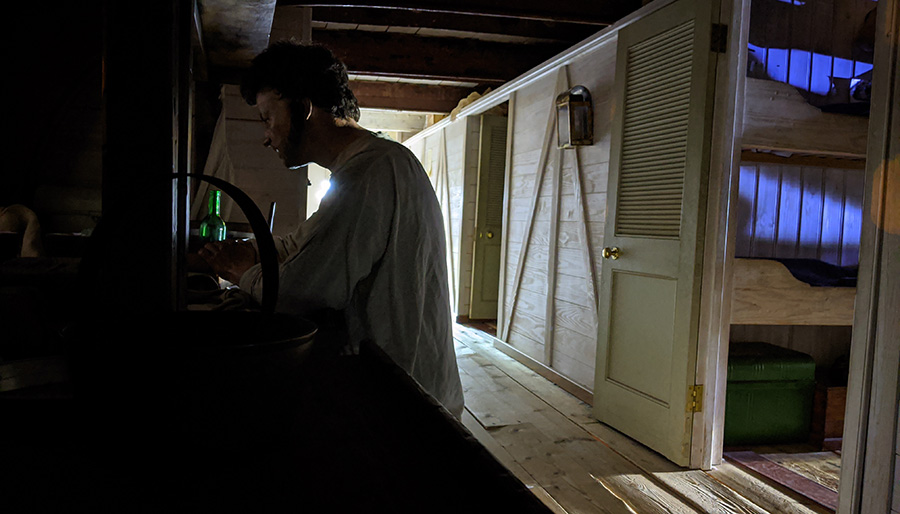 After a break, which consisted of another chance to mingle with Karl and Stuart, a cup of tea and, my choice of snack, a Jammie Wagon Wheel, we made our way to the front of the boat to continue our investigation. We started out on the lower deck in the cargo hold.
We didn't spend too long in this area as there was so much of the ship to see, but we did hear odd metallic sounds, and one guest felt as though something was behind her. From here we moved on and our group were split down further. While half went to the engine room, I went to the galley with a handful of guests.
With plenty of pots and pans scattered around the ship's kitchen, we hoped it might have been a prime location to see, or at least hear, some of these objects move around. However the galley proved to be peaceful, but the Great Britain seemed to be saving the best until last.
The night ended with an investigation of what is probably the most atmospheric part of the ship, steerage accommodation. This area of the middle deck consists of cramped rows of bunk beds, there are several mannequins scattered around, which in the dark certainly add a creepy vibe.
The vigil in this area started off with a few creaks and a dragging sound that couldn't be obviously explained. But then something very odd happened. I was towards the end of the accommodation area when suddenly I saw a light sweep across a wall of bunks.
What makes the incident really weird was that the light only appeared on a wall which was hidden from the rest of the room. A rogue beam of torch light from a guest wouldn't have been able to bend around the corner to reach these bunks. Even if it were possible, no one had a torch on at that moment.
What I witnessed looked like car head lights sweeping across a wall through a window, but the portholes on the boat were too small to create this effect, plus there was a river on one side and tall buildings between us and the nearest road on the other. As well as this we were at least six meters above ground so any beam from a headlight would be unable to reach us, or at best would only light the ceiling.
According to the MHE team, the same thing happened the night before. The previous night's guests described the phenomenon as being a white blurry light that could not be blocked or attributed to any source within or outside the ship.

The best thing about doing public ghost hunting events is that it gives you the opportunity to investigate somewhere your average team wouldn't be able to, or to get the chance to see somewhere in a new light. In the case of SS Great Britain it was both. As far as I'm aware, the ship hasn't hosted any paranormal events in several years, so we were among the first to get the chance to conduct an investigation. The location was also a very exciting place to investigate on a personal level, as the ship is something my hometown is famous for and is a testament to its trailblazing naval engineering past.
Although we didn't encounter the ghost of Captain Grey, it was a fairly active evening. The highlight of the night was of course the unexplained light in steerage, but the responsive knocks and bangs and the beginning of the night was also fascinating. We also had quite a bit of activity from those popular cat balls we had scattered around the areas we were investigating.
If you'd like to book your own ghost hunt with Most Haunted Experience, you can find more information at mosthauntedexperience.com.
Tags:
paranormaltopicalbristolghost huntsss great britainmost haunted experience