The Haunted & Hidden Bristol walking tour is the perfect way to rediscover the forgotten corners of Bristol, their gruesome history and their resident spooks. 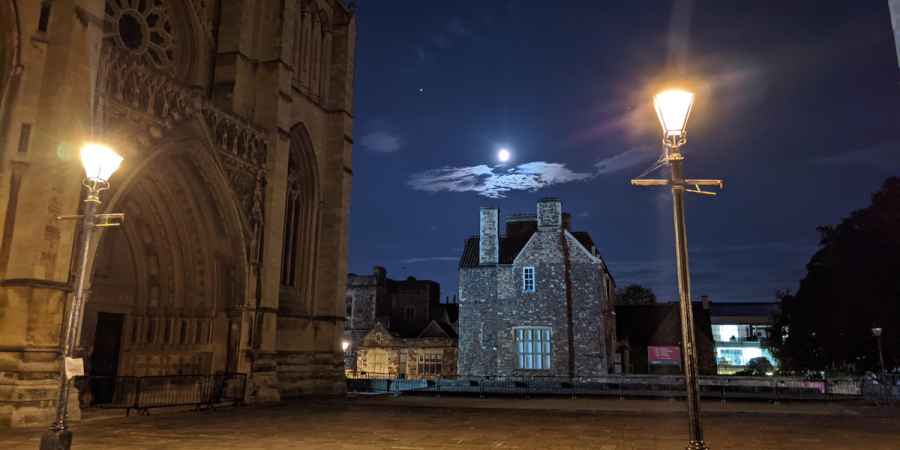 As the nights begin to draw in, I visited Bristol and spent a mild autumn evening exploring some of the city's darker, most sinister and lesser-known historical hotspots, plus some of it film and television locations.
Rated as the number one walking tour in Bristol and a recipient of a Trip Advisor Certificate of Excellence, the Haunted & Hidden Bristol tour is the perfect way to rediscover the forgotten corners of Bristol, their gruesome history and their resident spooks.
Our guide for the evening was John Hughes, a friendly, passionate and humorous host who's been sharing his knowledge of Bristol, its celebrity connections and its ghost with tourists for the last 16 years.

The tour starts at 8pm most Fridays from outside Bristol's beautiful and historic cathedral on College Green, one of England's most famous medieval churches. It dates back to 1140 when it was founded as an Augustinian abbey.
After hearing tales of the phantom monks here, John took us for a wander at a leisurely pace through the city's historic streets taking in seven of its most haunted buildings, as well as other notable spots with an interesting or forgotten history, plus film locations and buildings with tales of famous celebrities connected to them. The city's celeb links include the likes of Frank Sinatra, Cary Grant, Eddie Cochrane, Paul McCartney. 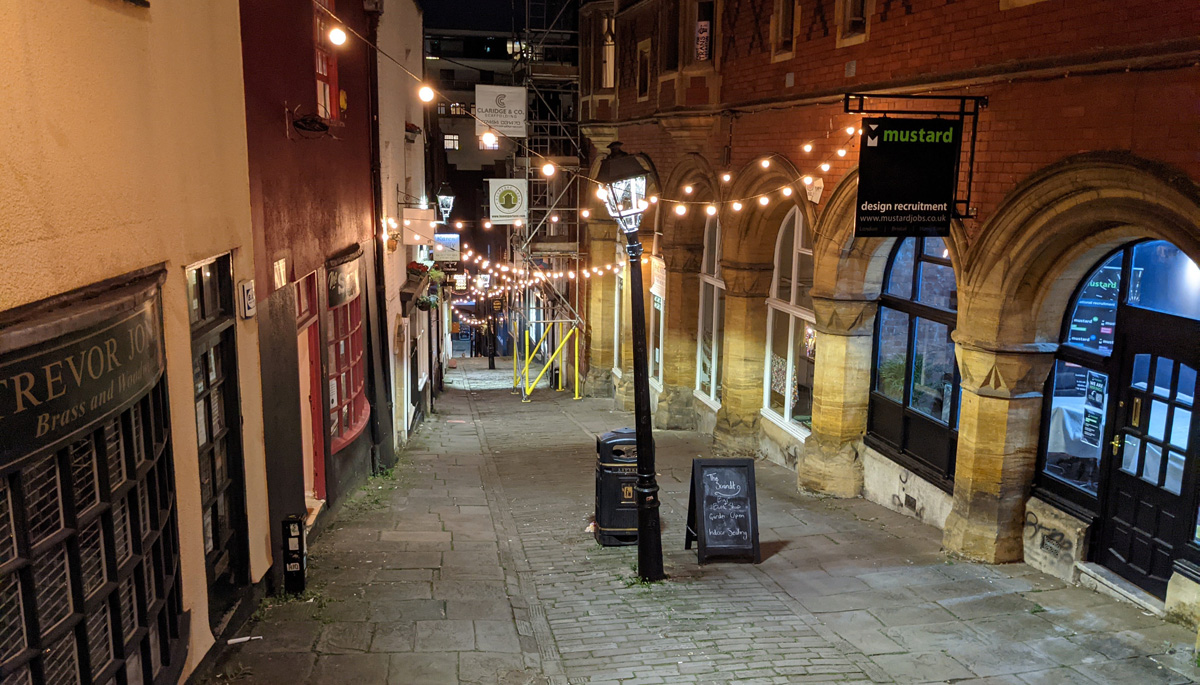 The 90-minute walk passes through the city centre - the site of the city's historic theatre, the Hippodrome, before descending the famous Christmas Steps, skirting around Broadmead shopping centre and Bristol's famous haunted cinema.
We then passed through the old city wall at St John's Church and headed towards St Nicholas Markets. The final leg of the tour had us meandering towards the atmospheric and bustling King Street and the tour's final stop, the Bristol Old Vic - the oldest working theatre in the UK.
Along the way, John entertained us with stories of hauntings, history and the many famous film and television projects shot on location around the city. The tour passes by some of the oldest drinking holes in town, including The Hatchet, The White Hart, The Rummer, The Old Duke and The Llandoger Trow.

The Llandoger is without a doubt the most haunted location in Bristol, boasting 15 ghosts, most famously the ghost of a young boy. We learn that the pub was named by a sailor who once owned the pub he was from a village in Wales called Llandoger, which built a type of flat bottom boat called a trow. 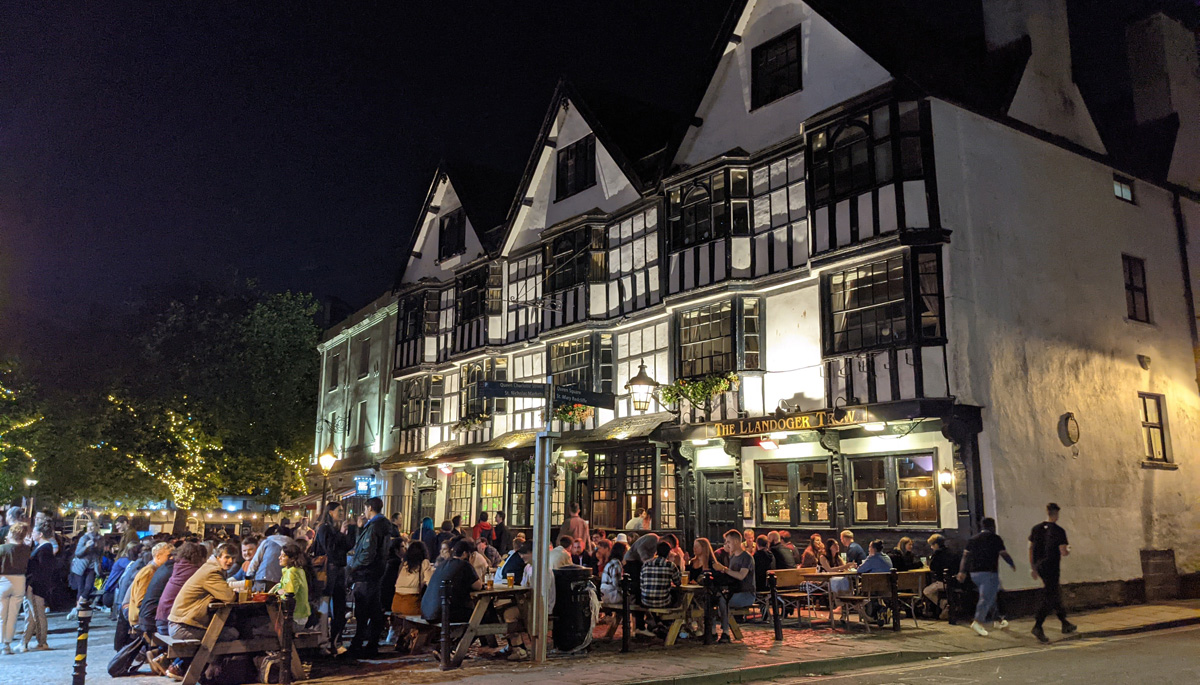 I grew up in Bristol and know the city fairly well, but the tour's one-and-a-half-mile route took us through some quieter parts of the city centre, the lesser known side streets and narrow lanes. It was a real eye-opener to discover how many fascinating places there are hidden just off the main streets. I was introduced to some historic locations and venues that I now want to come back and explore.
The tour isn't as dramatic as some of the other ghost tours in the country, but it is uniquely Bristolian and delivered with a good measure of humour.
As a paranormal buff and a bit of a television location geek, I found John's trivia fascinating as we weaved in and around the smaller, hidden lanes in the centre of Bristol.
Despite the odd joke, the occasional tongue-in-cheek delivery and talk of locations used by the classic British comedy 'Only Fools And Horses', the tour also dives into some of the city's darker history including facts about its plague pits, executions, murders and even the grisly pub door that's covered in real human skin.
Tours run on Friday nights at 8pm with additional dates and times available over Halloween. Advance booking is essential and tickets cost £7 per person. To find out more, book your place or to enquire about a private group walk head over to John's website or visit the tour's official Facebook page.
John now also leads a nostalgic walk around Bristol's iconic music venues past and present. The monthly Bristol Rock & Roll Walking Tour takes place on Sunday afternoons.
» Find out more at hauntedandhiddenbristol.co.uk
Tags:
bristolparanormal