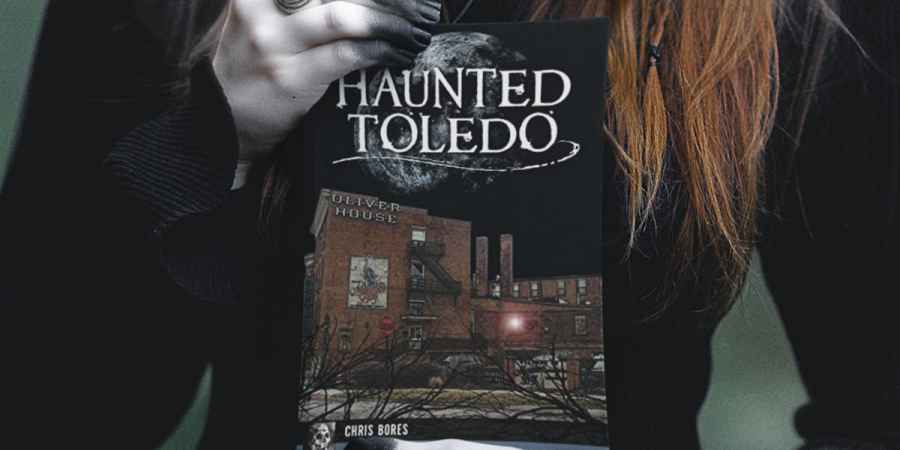 Chris Bores, the world's first "ghost behaviorist", has spent the last decade exploring the haunted buildings of Toledo, Ohio. Now you can read about the city's odd occurrences in his new book, which is released on September 19 and is available to pre-order now.
'Haunted Toledo' examines the paranormal tales from a city rich in tradition and history. A murdered maid and a bashful child are but two of numerous restless spirits roaming the notoriously haunted Oliver House. The nuns of St. Ursula's Academy, now the Collingwood Arts Center, tend the campus in death as they did in life.
Supernatural events at the Toledo Yacht Club, which is said to be haunted by as many as 100 ghosts, may be explained by its little-known history, and the Franklin Park Mall, the airport and even a Rite-Aid have their own chilling stories. Pinpointing fifty locations across the city, Chris uncovers Toledo's haunted history.
As Ohio's fourth most populated state, there's no shortage of stories, including the first ever ghostly hand materializing out of thin air captured on film at the Oliver House, encounters with the dark entity roaming the Collingwood Arts Center basement, and the amazing interactions with a little girl haunting the Repertoire Theater.
Find out how Chris created the first ever ghost-human vaudeville act with a ghost on his ghost tours, and read about his interview with a man in the basement of the Firefly Lounge who died in the infamous 1890 Summit St. fire.
Chris also uncovers the lost information relating to a hidden cemetery in Toledo's old westside that causes the Hillcrest Hotel to be haunted today. He researches a haunted restaurant with a little known tombstone buried next to it, recounts the employees' stories of ghostly activity at Toledo Zoo, and shares the findings of his rare ghost investigation of the Toledo Airport and the chilling conversation with their spirits.
Chris uses revolutionary cutting-edge methodologies that grant him amazing encounters with the dead. By using a new foundation pulled from ancient texts, psychology and sociology, Chris has created a groundbreaking ghost classification system leading to some of the longest spirit interactions ever recorded. The amazing insights pulled from interviewing ghosts are mind blowing.
Chris is the host of 'Ghost Doctor', the author of 'Ghost Hunting 2.0' and has been a ghost tour guide at Oliver House and Collingwood Arts Center in Toledo for almost a decade. He has studied ancient texts, psychology and sociology which has allowed him to change the name of the paranormal game. He has been featured in local press as well as on various national media outlets including the Travel Channel, Coast to Coast AM, and CBS News.
'Haunted Toledo' is published by Arcadia Publishing, America's leading publisher of books of local history and local interest. The book is released on September 19 but is available to pre-order now on Amazon.
🇬🇧 Pre-order now
🇺🇸 Pre-order now
Tags:
booksparanormaltopical