This article is more than three years old and was last updated in November 2021. 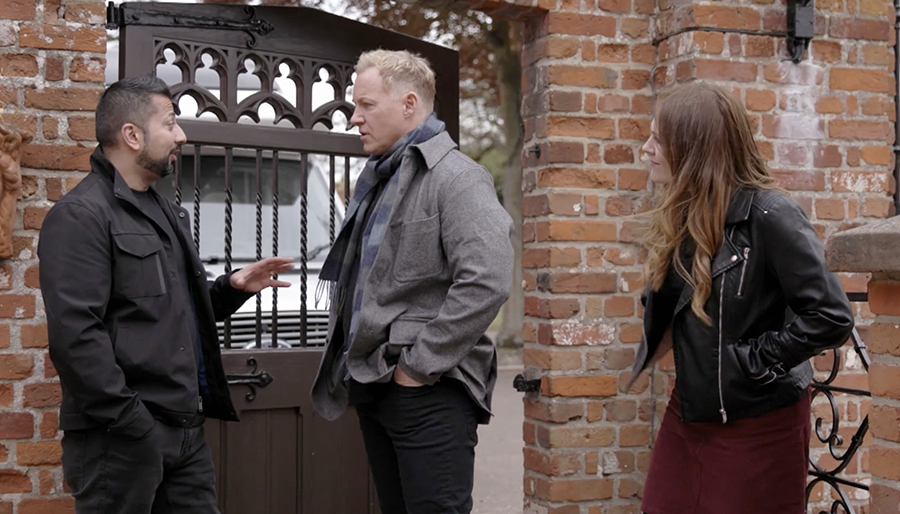 Barri Ghai, Chris Fleming, and new team member, Jayne Harris, head to the Essex countryside, armed with specialist paranormal equipment, in order to find out what's haunting the occupants of a historic house with an unsettling past.
The team have been called to Little Easton Manor near Braintree by its owners to find an explanation for a series of unexplained phenomena. Andy and Mel Mahoney say the started experiencing strange activity just three weeks after moving into the property in 2018. The activity ranges from unexplained sounds through to sinister apparitions.
Andy says he has seen "a lady coming through the kitchen" and walking through a solid wall where a door used to be. He's also reported hearing the sound of a party echoing throughout the empty house. His wife, Mel, said "it would be lovely to know what's happening".
Hoping to provide Andy and Mel with the answers they're looking for, Barri, Chris and Jayne arrive in their mobile nerve centre. En route Chris talks about the image of a woman he'd seen the previous night that he thinks is connected to the house, he said this woman in his head kept staring at him. 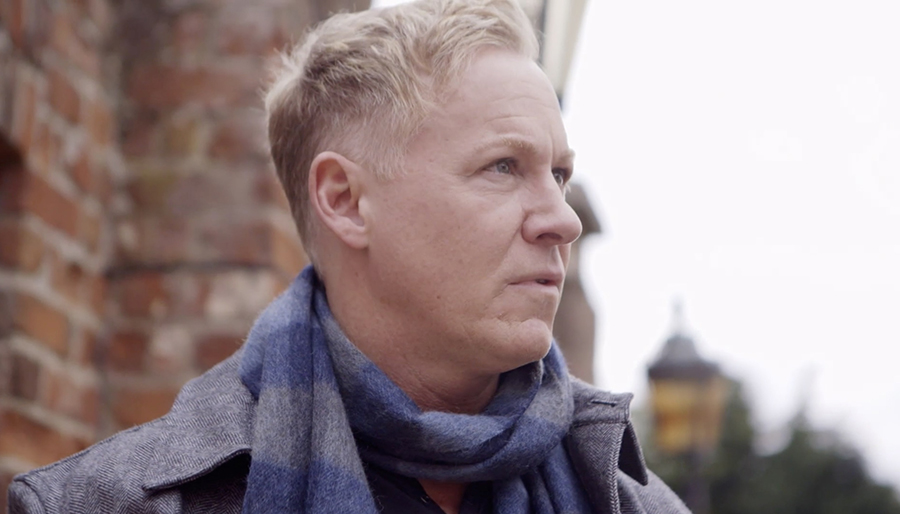 As always the team split up and go about their specialist roles alone in order to find out more about the property and its paranormal history. As the show's resident psychic medium, Chris knows nothing about the location before he arrives, but as soon as the van arrived at the manor he said he was picking up on the residual energy of children playing and running around.
Once walking around the huge grounds of the country house on his own, he said "I want to really absorb what's here, and what may have been here at one time". After a while he said he was picking up on the same female energy as he'd felt the night before.
Before long he was drawn into the house and to a bedroom, where he says "something is wrong". Chris noticed that there are a lot of flies on one of the walls of the room, something he said can "signify demonic infestation". In this room Chris pulls out his trusty digital audio recorder in an attempt to capture spirit voice, a technique known as Electronic Voice Phenomenon (EVP). When he reviews his recording it seems to have worked, as he hears a voice saying "get out".
By the end of his walk around Chris is convinced that the team are dealing with multiple energies, including the spirit of the woman, and also children. 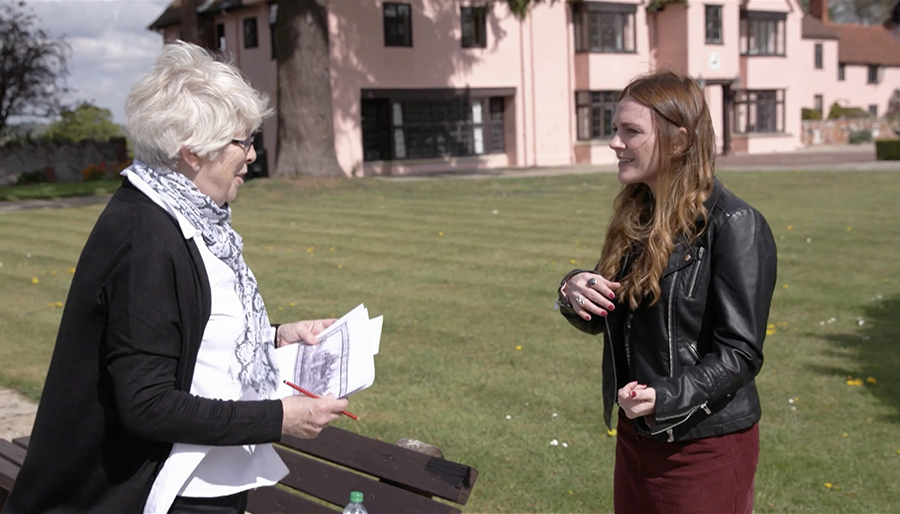 Meanwhile Jayne had met up with a local historian, Maggie Stevens, to learn more about Little Easton's past. Maggie tells Jayne that the house was once a hamlet in an area known as the Great Forest of Essex, which stretched from London to Thaxted in the northwest of the county.
People have lived on the land for centuries, with evidence of a fortified dwelling and a church existing on the site that dates back to Saxon times.
Jayne also discovers the manor was once own by Francis Maynard AKA Daisy, a fun-loving woman who became the Countess of Warwick. She turned an outbuilding, the old tithe barn, into a theatre for her friends and would have held lavish parties on the estate.
Barri was also meeting some locals. He was in the manor's grounds with fisherman, Charlie Kelly, who had a story to tell about strange activity near the lake. One evening he heard footsteps walking along the gravel path". He told Barri, "a man walked right past me and made his way for the 'private no entry' sign." Charlie shouted at the man, telling him he's not allowed any further. Charlie said, "he turned around and I could see completely through him".
Charlie described the man as wearing a brown monk's cowl and believes the apparition might be connected to some old tunnels nearby, that are said to be remains of a local abbey. Charlie points out the entrance to these tunnels.
Barri then treated us to an impression of his team mate Chris. Barri's convinced that Chris will enthusiastically say to him, "yo Barri, get yourself down there man, go and find some bats!"
Barri then returned to the mobile nerve centre for a Skype call with an American tourist, Chandler. He tells Barri that he and his friend, Conor, had a creepy experience one night while staying at the property. Their encounter involved the spirit of three children in one of the manor's bedrooms. 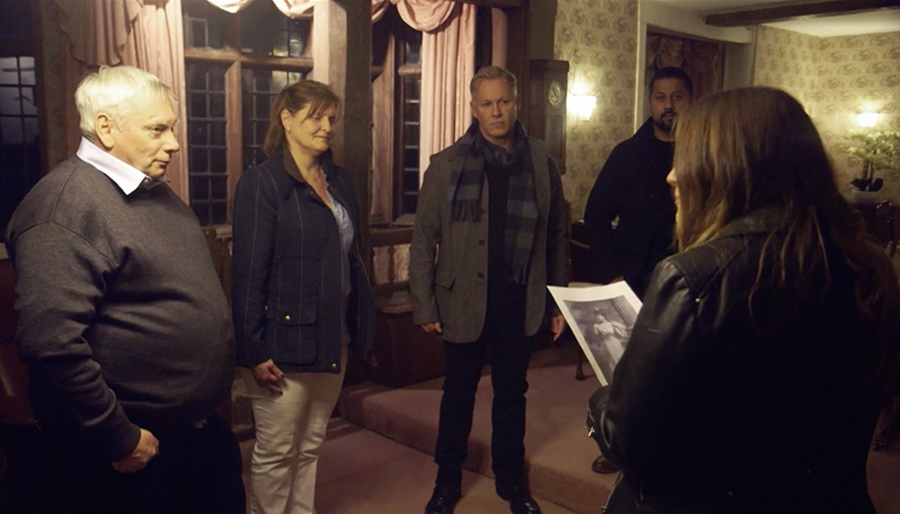 The team re-group to share what they'd learnt. Jayne thought it was a good idea to initially go in search of Daisy and had called in Andy and Mel to help illicit a response. They began in the lounge by singing the song 'Daisy Daisy', because this well-known tune is said to have been inspired by the countess and the team hope it might get a reaction from her spirit.
Chris claimed he didn't know the words, but we just think he's a bit too cool to be singing a song from 1892 on television, but the rest sung in unison (poorly), "Daisy, Daisy, give me your answer, do..."
Barri then pulled out his audio recorder and playing back his recording there was what sounded like a clear response. As they began singing a female voice seemed to be saying "yes". Barri then switched to a spirit box, a device which scans through the radio spectrum. The idea is that spirits can affect the sound and use it to communicate. He asked out, "who walked behind me a moment ago?" and a voice immediately replies, "me".
The gang then head upstairs to the room where Chandler and Conor had their experience. Barri is now using a REM-Pod, which detects changes in a static electricity field it radiates, this can happen if someone or something moves near its antenna. At times the device's lights seem to flash in response to their questions.
Hoping to get more of a reaction from the spirits, Jayne put some marbles down on the floor. Barri called out, "if you can move one of those marbles for us we would be forever grateful." Chris heard a direct response that said, "I can't". This is known as a DVP or Direct Voice Phenomenon, but the voice was also captured on Barri's audio recorder. 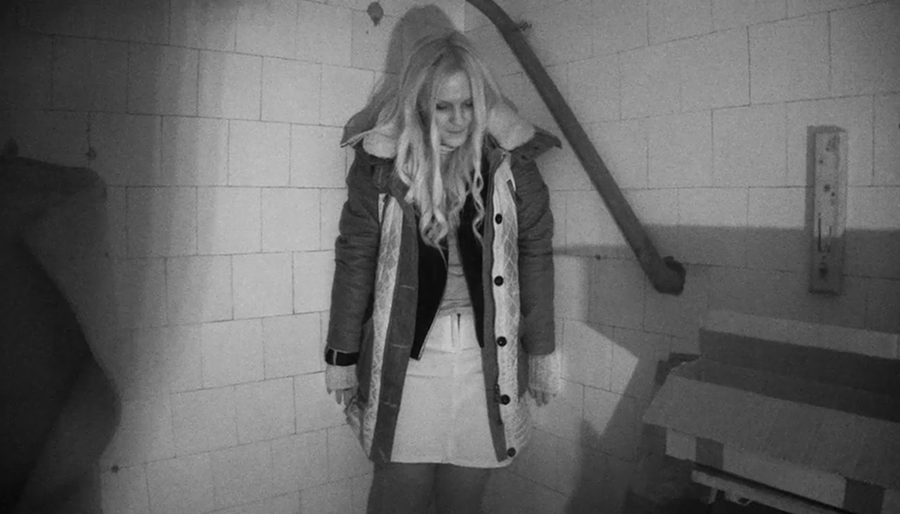 As the light fades outside, Andy and Mel leave, and static cameras are rigged around the property. The team are then locked down inside the manor for a 12 hour investigation spread over its three floors.
Chris and Jayne started begin the all-night vigil in one of the upstairs bedrooms where straight away they hear tapping and creaking on one of the room's doors, but on further investigation Chris realises it's just the result of stepping on a loose floorboard.
They later moved on to the cellar, where Chris said he felt like something was poking his neck, but it was Jayne who was really being effected by the space. She soon reported feeling nauseous and having a headache. It wasn't long before she felt so sick that she was forced to leave the space, later saying, "I felt it in the pit of my stomach".
Despite the negative atmosphere, Chris was keen to get on with the investigation. He said, "we need to go back down there, I want to confront them. I need to know how they got here." Insisting that this stuff doesn't scare him and it's what he lives for.
This time they were armed with a spirit box and a voice came through that seemed to say "leave", but refused and explored some more of the vast cellar until they found a narrow staircase that lead them back to the fly - and possibly demon - infested bedroom, but compared to the cellar this room now felt like a much happier space and they feel they're once again on the scent of Daisy.
Meanwhile Barri was out in the manor's grounds to place a motion activated camera near the lake where Charlie had seen an apparition. Barri was reluctantly venturing into the abandoned tunnel that Charlie had shown him. He said, "I don't like it down here, there's something moving in there."
Moments later he heard something speak to him, excitedly Barri said "it was a whispered word," it sounded like it had asked "who are you?"
It wasn't long before Barri heard another voice, this time very clear that said "get out". Afterwards Barri said, "there's no doubting that" and called it a "terrifying experience" and an encounter he will never forget.
As Barri fled the tunnel, a shadow was caught on the camera he'd placed there. Although it was only subtle, Barri said there's no explanation for it and thinks they can only be picking up on an apparition. 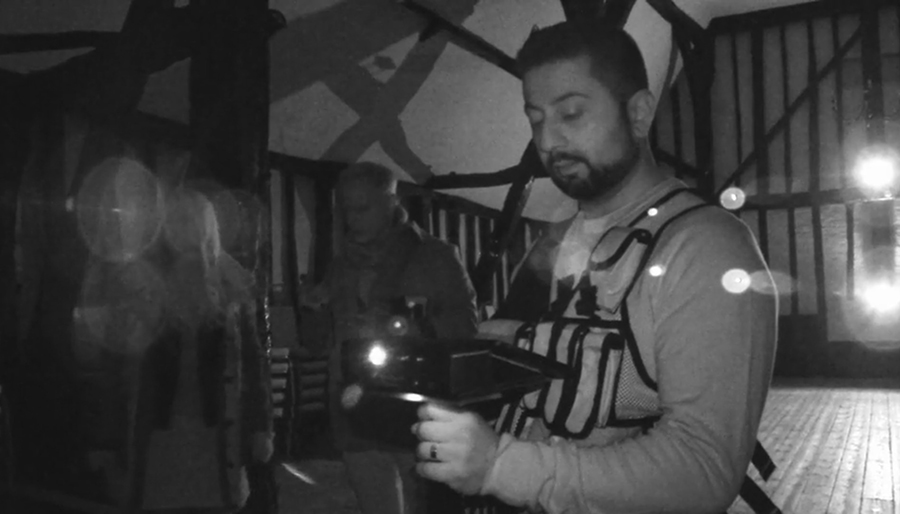 For the final vigil of the night, the team re-group and once again go on the trail of Daisy and investigate her beloved theatre, that she had built in a 15th century outbuilding.
Barri has his trusty SLS camera, a device that maps anomalies the human eye can't see by measuring changes in an invisible laser grid it projects. Straight away the device maps two potential anomalies on its screen in the form of stickmen.
Jayne describes this as "a strong connection", and as the figures appear to be on the stage, she climbs up alongside them and puts her hand out to where the SLS shows them to be. As Jayne passed her hand through the spot, she feels her fingers tingling.
The episode ends with Chris performing a ritual to cleanse the property and move on the malevolent spirits, concentrating on the area of the cellar that had made Jayne feel ill.
'Help! My House Is Haunted' continues next week on Really as part of the channel's #Freakend event, bringing viewers two nights of paranormal entertainment every Thursday and Friday.
You can watch in the United Kingdom and Ireland as part of the Discovery family of channels. You can watch Really on Freeview (17), Sky (142), Virgin Media (129) and Freesat (160), plus YouView, BT TV and TalkTalk TV. Or watch previous episodes on demand on dplay.
Tags:
paranormalhelp my house is hauntedtelevisiontopical