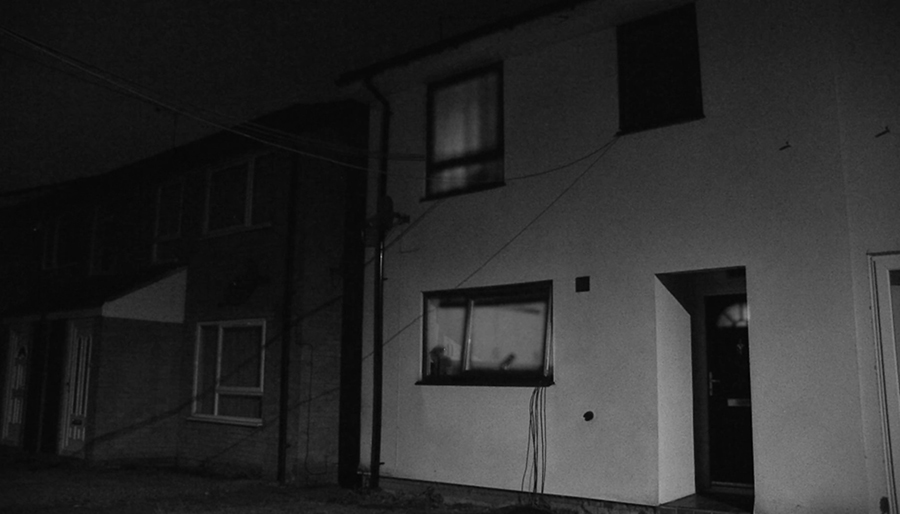 Barri Ghai, Chris Fleming, and Jayne Harris head to their next haunted location, a modern council house which is built on the site of an old coal mine in Bedworth, Nuneaton.
Julie Evan's has been experiencing unsettling activity ever since she moved into the house 20 years ago, and has called the HMHIH team to investigate a case which could prove to be their toughest to date. Upon moving into the house she discovered a pentagram drawn on to a wall and Satanic verses written on the walls.
Julie said, "me and my husband decided to clean it up," but ever since she has been plagued by escalating levels of terrifying and unexplainable phenomena. It all started one night when she heard her husband return from work, run up the stairs and into the bedroom - but when Julie looked up, there was no one there.
Julie thinks that the presence in her house is a female spirit, although we soon learn there is a male entity too. She said, "we got quite used to living with her", but as her daughter, Jess, got older the spirit started getting more threatening and sinister. Julie said that they've seen and heard weird things, objects have moved around the house and electrical appliances have switched themselves on and off.
The team's psychic medium, Chris, always insists on being kept in the dark about the location, but before they even arrived at the property Chris became aware of the fact that the case is "personal" and got the impression of a little girl who might be connected with the house. 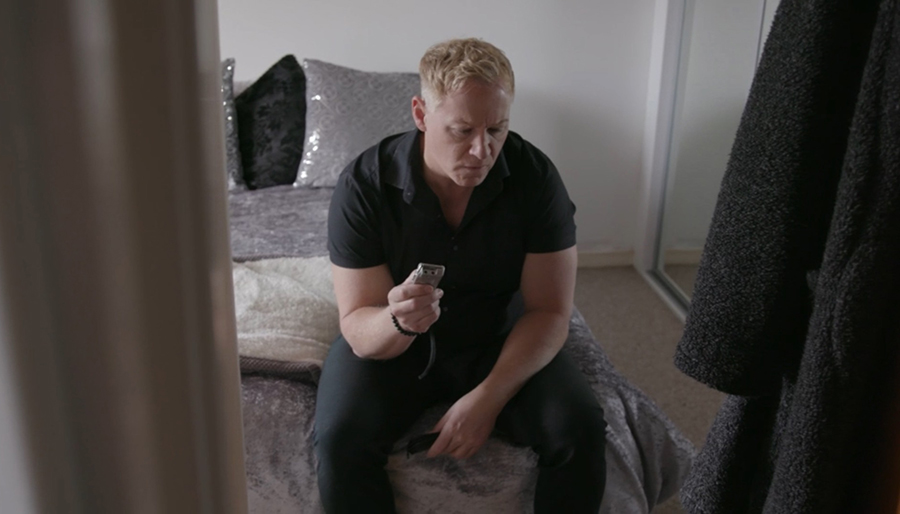 While Barri and Jayne head off to try too uncover what could link this very normal-looking house to the paranormal, Chris started the investigation with a solo walk around the property. He immediately sensed something dark. He described it as being "like a cloak going over my body. A heaviness." He also felt a pressure in his chest.
At the back of the house Chris became aware of a male presence. Chris said "he says 'you'll find me underneath'." Chris thinks this points towards a history of something beneath the ground. Upstairs he picks up on a sense of "frustration, anger - upset that something wasn't resolved for you". He thinks this is why the spirit hasn't been able to move on.
Chris pulled out his trusty audio recorder in one of the bedrooms and attempted to capture spirit voices using it, a technique known as EVP or Electronic Voice Phenomenon. He captures what sounds like a voice saying "why can't you go?"
Chris feels the team are dealing with one male spirit, but that there are also other entities that are stopping it from communicating with him. 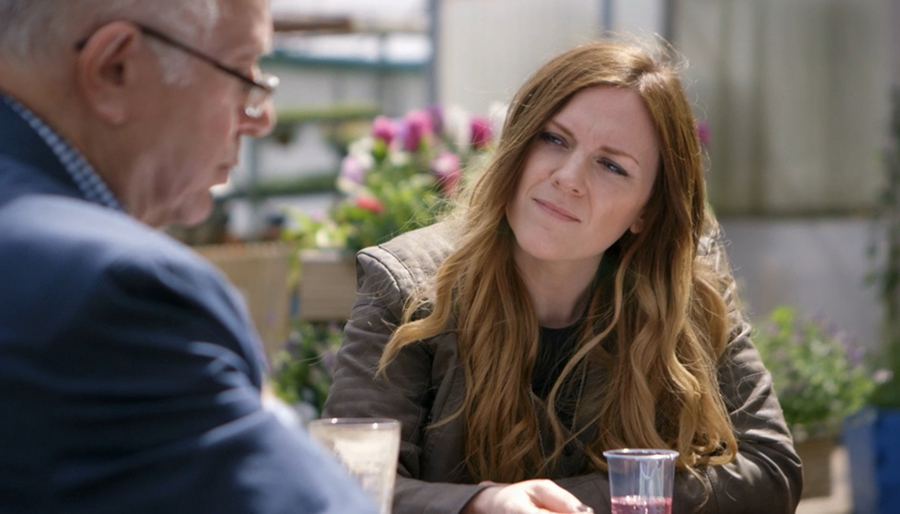 Barri went to meet Julie's daughter at a safe location. Speaking to Barri at a friend's house, Jess said that from a young age she's been aware of an oppressive energy in the house. She told Barri, "I used to just lock myself in the kitchen and I'd stay there until my mum got back". She says the entity haunting the house is a tall man with broad shoulders, which she's seen in the form of a black figure with long fingers.
Meanwhile Jayne went to meet local historian Peter Lee in the nearby Miners Welfare Park. Jayne discovers that the whole town is built on a coal field and the town was once dominated by mining - a dangerous and often deadly profession. Julie's house in particular is built near the site of an old colliery and is most likely on top of the network of coal mines. 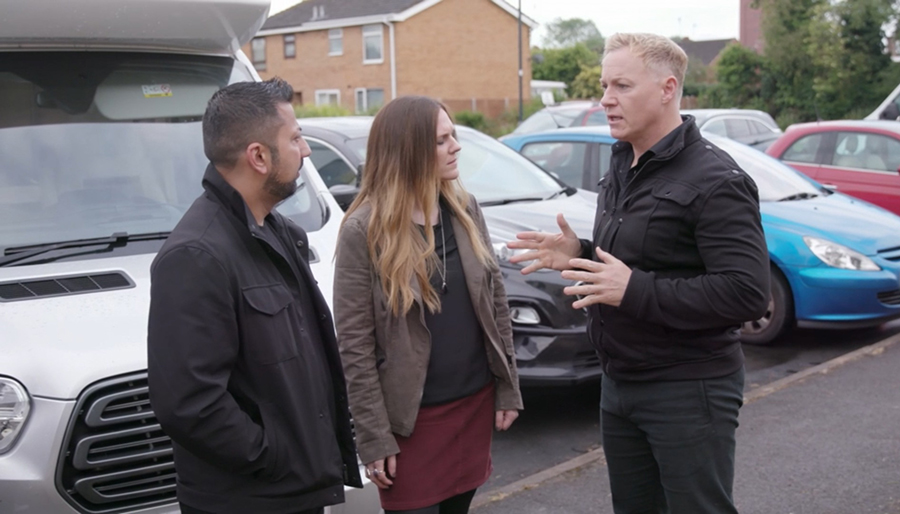 With their own individual investigations completed, the team re-group with a better understanding of the area and the spirits they might be facing, to share what they've learnt and to put together a plan of action for their nighttime investigation. Chris warns, "I'm getting the sensation that this is going to be a very difficult case".
Julie and Jess join the team for the first part of their investigation, the team hope that their involvement might act as a trigger and encourage the spirits of the house to interact with them.
Jess started the vigil by calling out, "why me?" and instantly they all heard a bang coming from upstairs, despite no one being up there. Chris then called out "are there imps here?" After Chris' question, a voice was captured on an EVP recorder that seemed to say "f**k you". The team take this as confirmation that imps are present.
Julie questions where these imps have come from. Chris explains, "if anyone does any conjuring, trying to communicate with things, they can sometimes come through." He adds, "they'll start to effect people, objects will disappear, things might go flying across the room". Julie and Jess think this exactly sums up what's happening, but Chris warns, "they will stake the place out and then a major demon will come in".
After hearing another bang coming from upstairs, the gang head to one of the bedrooms where Barri uses a spirit box to attempt to make contact. This device rapidly scans through radio frequencies and allows spirits to communicate by manipulating the white noise.
Jess once again calls out. After asking "do you want us to help you move on?" A voice through the spirit box seems to say "yes". 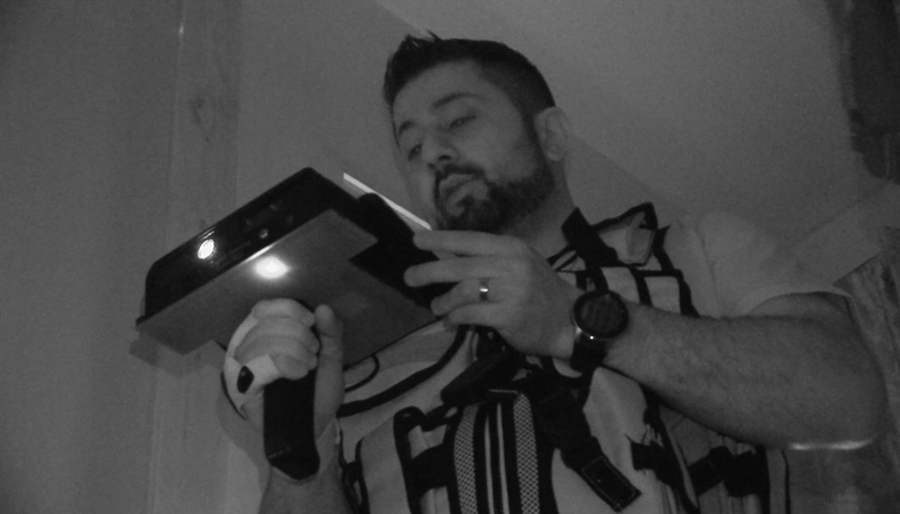 As the light fades outside, Julie and Jess leave, and static cameras are rigged around the property. The team are then locked down inside the house for a 12 hour investigation throughout the night.
While Chris reviews the audio from his walk through in their mobile nerve centre, Barri and Jayne venture into the house armed with an SLS camera to begin the investigation. The SLS camera can map and record anomalies that appear outside of the visible spectrum. Almost straight away the camera mapped an anomaly that was shown in the form of a stick man on the camera's screen.
Moments later they all heard something coming from downstairs, they investigated and found that a cross that had been on the wall had fallen from its hanging, landing at the bottom of the stairs. Chris says, "demonic entities will do that as a form of intimidation".
Later the team found that several of their ghost hunting gadgets, including a REM-Pod, were all triggering at the same time with no apparent cause. Some of the responses seemed to be intelligent. At the same moment, Chris caught what he thought was the word "imp" on his EVP recorder. Jayne then thought she saw something in the kitchen with her, something about two and a half feet tall. She described it as "a dark shadow that zipped past the unit." 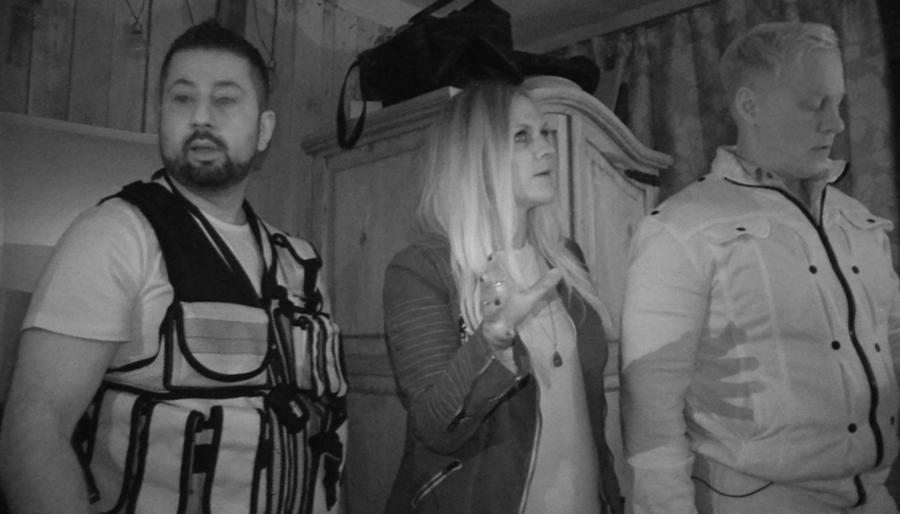 Just before 11pm the team focus their attention on the back bedroom, as Julie says that this room becomes very active around this time. It's also the room where she'd found the sinister occult symbols marked on the wall in nail varnish when she'd moved in.
As Jayne called out, once again all the gadgets triggered. Barri called out "are you a demon?" And the devices seemed to confirm this.
Chris thinks they need more information and decides to use a device called the Ovilus 4. It contains a bank of phonetics, the sounds that make up words. It monitors various atmospheric metrics, such as electromagnetic field strength. It's said that spirits can affect these atmospheric conditions in order to form words and intelligent responses.
When Chris places the gadget on the wall, it spewed out "apocalypse... follow... 13" and at the same time the REM-Pod started flashing. Barri said, "in all the years I've been using the Ovilus in investigations, I've never had such direct, clear responses."
They then had the word "oremus" come through, which is apparently a Latin invitation to prey. Moments later Chris asked "who do you serve?" and a voice through one of the devices said "Satan". When Barri asked the question for a second time, they got the same response. It was followed seconds later by the phrase "there are imps".
Chris then lies on a bed and closes his eyes in the hopes he can communicate better with the entities in the house. He calls out to any energies present. Moments later he seems to be fighting some kind of strong force, but talking through it he asks "why don't you just tell me your name?" After snapping out of this state, Chris feels he has a better understanding of what's going on in the house. He says, "there are various entities, from the demon, through to the imps, to trapped human souls". He explained, "I'm getting these souls below us. They're souls that are coming forward within one of the mine shafts ".
Moments later an EVP recording confirmed that the spirits needed the team's help and preyers to help them move on. Chris also find mentions of "demon" and "zepar" in his recordings. Barri pulls out his phone and a quick Google search reveals a demon called Zepar, the description online reads "Zepar is not an easy demon to work with for the inexperienced. He has been known to cause some issues for the occultist."
Barri says, "we have to remove the demon first, and his legions of imps, before we can help the human souls that are trapped here". Based on this, Chris performed his cleansing ritual around the house and the investigation came to an end. Perhaps it worked, as a spirit box in the kitchen said, "it's over".

As always, the episode had a strong narrative, introducing viewers to unique aspects of the paranormal - in the case of this episode it was one specific demon and its army of imps. It was nice to see an investigation in such a normal house. A smallish two-bedroom, semi-detached house, not dissimilar to the infamous 30 East Drive or the Enfield Poltergeist house.
The episode included some very clear EVPs, voice that seemed intelligent and relevant to the team's questions, but unusually some of the initial set up and thoughts from Chris weren't resolved during the investigation, such as the female spirit Julie mentioned, as miners would have been male. Chris also said on the way to the house that he felt a connection to a young girl, but we didn't get to find out who this was either - perhaps Jess?
'Help! My House Is Haunted' continues next week on Really as part of the channel's #Freakend event, bringing viewers two nights of paranormal entertainment every Thursday and Friday.
You can watch in the United Kingdom and Ireland as part of the Discovery family of channels. You can watch Really on Freeview (17), Sky (142), Virgin Media (129) and Freesat (160), plus YouView, BT TV and TalkTalk TV. Or watch previous episodes on demand on dplay.
Tags:
paranormalhelp my house is hauntedtelevisiontopicalwarwickshite