'Help! My House Is Haunted' Returns To Discovery+ On January 21 With A Six-Episode Run Of Celebrity Specials 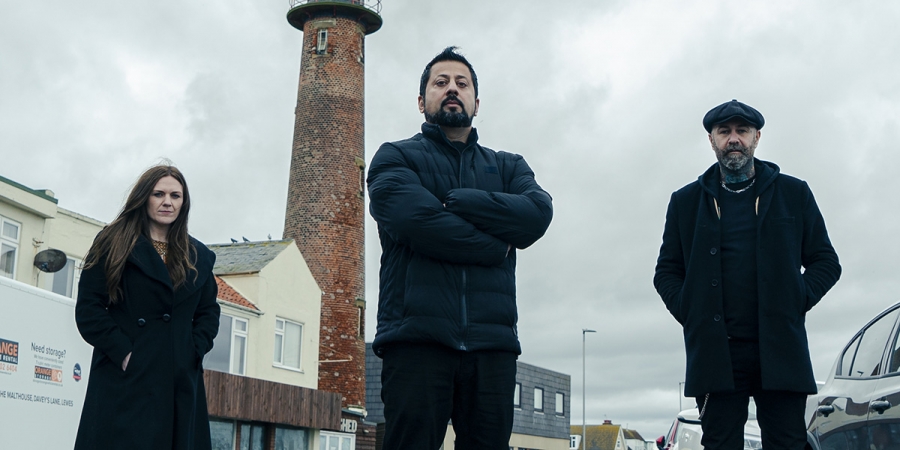 Barri Ghai, Jayne Harris and Ian Lawman kick off the new year with a new series of investigations in the homes of six celebrities in all new episodes of 'Help! My House Is Haunted' that drop on Discovery+ on January 21.
Each of the hour-long episode will follow the team as they use their supernatural specialities to exorcise the haunted properties of some of the UK's best known celebrities.
As always, Barri serves as the team's paranormal researcher, while Jayne will delve into the history of the location, and Ian will be on hand as the show's resident exorcist and medium.
Shadowy figures, whispered threats, objects moving inexplicably, temperature drops, and even physical touching. It’s not just the public that are plagued with unwanted paranormal activity, our favourite celebrities' homes are awash with hauntings too. In an ambitious run of specials, the 'Help! My House Is Haunted' team are back in a supernatural extravaganza where top ghost hunting tech and daring divination will reveal the spirits lingering in an eclectic mix of celeb-owned properties.
More scream than 'reem' our trio of experts will be joined by 'The Only Way Is Essex' stars Frankie Essex and Joey Essex to investigate sinister events, as Frankie claims to have always felt a spiritual presence in her Chigwell home, and has previously visited several mediums.
Having captured unexplainable, hair-raising footage on her camera, Geordie Shore star Charlotte Crosby summons the team to see if they can uncover what spirits roam the rooms and hallways of her luxurious Primrose Hill mansion.
Singer, actress and 80s icon Toyah Willcox has experienced persistent paranormal activity in her Worcestershire home ever since she moved in 20 years ago. To lend a helping hand, the team undergo one of their most terrifying investigations to date and uncover a nearby medieval tragedy that could be linked to the hostile entity dwelling in the property.
Also, model and author Alex Best invites the team to her haunted farmhouse in Surrey. A malevolent spirit has followed her for years, potentially coming from her previous home, but her friends believe it's the spirit of her husband, the late football legend George Best. Elsewhere, the team joins social media star Arron Crascall to get answers to what might be causing the disturbing paranormal activity in his home.
And finally, from 'Homes Under The Hammer' to homes under attack from paranormal entities, TV presenter Martin Roberts has sensed spirits since the day he purchased his 17th Century farmhouse. An emotional and mysterious investigation helps the team – and Martin – uncover the secrets of this ancient house.
Clare Laycock, Head of Entertainment at Discovery, said, "'Help! My House Is Haunted' has been one of Discovery+'s big success stories this past year and bringing celebrities into the mix of blood-curdling paranormal investigations and ghostly activities is an exciting next chapter for this hair-raising commission! Our dedicated paranormal fans are in for a treat as we step into some of our favourite celebrity's houses in search of ghosts, spirits and demonic entities."
David Notman-Watt, Founder & Executive Producer, Back2back who produce the series added, "making 'Help! My House Is Haunted' over the past few years has proven to be an extreme roller coaster of a ride for Back2Back in so many ways – it's not often the team are all left speechless by some of the unexplainable, sinister and downright weird events that are captured in our rushes. Investigating haunted celebrity homes will take the show to yet another level once again, and this ghostly adventure with discovery+ looks set to keep going and growing."
The celeb series follows the success of the show's third series that premiered on Discovery+ last year, but this series of celebrity specials isn't the last we'll hear from the 'Help!' team. Back2back who produce the series have been on the lookout for new haunted locations suggesting that a fourth series of the show might be on the way, perhaps it might even land later in 2022.