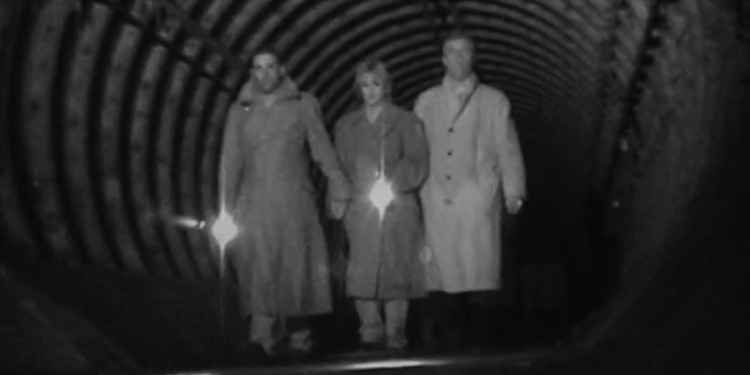 Yvette Fielding and a team of experts visit the now defunct Aldwych Tube station in central London, which was used as an air-raid shelter during the Second World War.
Aldwych Station, originally know as Strand Station was closed in 1994. The disused street level entrance can still be seen on The Strand. Strand Station was originally opened in 1907, it acted as an off-shoot of the Piccadilly Line to Holborn. The station attracted low passenger numbers but originally ran a late night shuttle service to take theatre-goers from The Strand to Finsbury Park and Holbron.
Thirty-three years after it was opened, the station was recommended for temporary closure during the Second World War, during this time the station was used as an air raid shelter, the tunnel its self was used as a storage space for valuable from the British Museum.
The station was put back in to operation in 1946 but passenger numbers remained low, it soon became a Monday to Friday service and remained this way until it's eventual closure in 1994. The limited amount of movement on the line made it an ideal film location and many movies and TV shows were shot in the station before it's closure.
Staff working at the station say they've heard strange noises while working in the tunnels and experienced unexplained icy blasts of cold air. There also said to be reports of the ghost of an actress seen walking along the platform. It's thought that she haunts the station because she's angry that the theatre where she was the leading lady was demolished to make way for the station.

Oddly Yvette introduces us to the location while dressed in a WWII uniform. She says that dressing in a costume and surrounding yourself with items from a certain time period can be said to induce a time slip and increase the chances of paranormal activity.
When the show's resident psychic medium Derek Acorah arrived, the team went for a walk around the tunnels. Derek immediately picked up on the spirit of the actress and described a time when he says she was spotted by a cleaner. He then picked up on the ghost of an old lady, who has allegedly save a few worker at Aldgate station from a fatal accident. He named this woman, who he said died by falling on to the tracks, as Alice Humphries, but there are no records to back this up.
Derek then warned that in the darkness there are being which dwell down here called "Subterraneans," which are said to be half human creatures which live in the London Underground. Derek described them as hairy, hunched-back creatures that shuffle around in the darkness.
The team explored the area of disused tunnels cautiously after this warning and had a scare before they returned to the platform when a motion detector that team member Stuart Torevell built was triggered on the platform. The detector's beam was too high to be a rat, could it have been the ghost of the actress who is seen walking the platform?
For reviews of all of the new episodes, plus highlights and evidence from the shows, and to find out when Most Haunted is on next, visit the Most Haunted episode guide.
Tags:
most hauntedparanormaltelevisiontopicallondonundergroundshiver