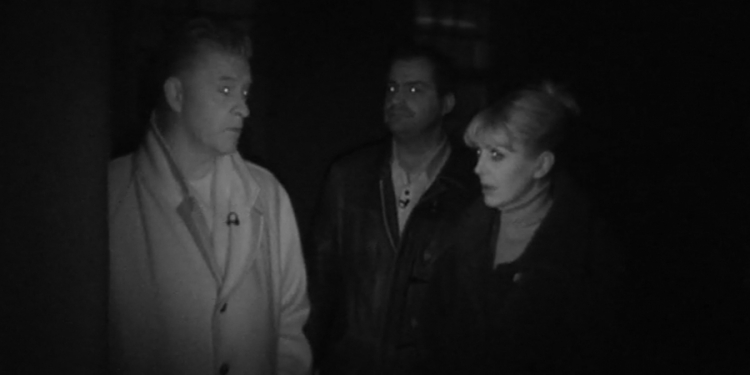 Yvette Fielding, Derek Acorah and the team visit Chatham in Kent to investigate rumours of ghosts roaming buildings in the dockyards.
Chatham was one of Britain's most important dockyards for 400 years and Royal Naval ships have been built and repaired here as far back as the reign of Henry VIII. Chatham's naval past is a proud one and it was here that HMS Victory, Nelson's famous flagship at the Battle of Trafalgar, was built.
Tragedy struck the dockyard in 1667, when the Dutch fleet attacked the harbour, destroying numerous ships and appropriating the Navy's flagship, the HMS Royal Charles.

Throughout its history the dockyard was at the forefront of modernisation in the ship building industry and expanding its skills to producing submarines in the 20th century. The dockyard ceased operation in 1984, but in addition to tales of its rich maritime history, stories of ghostly goings on at the docks are still told.
In a narrow passageway in an area of the docks know as the Ropery, a young drummer boy was murdered and decapitated, ever since then his headless ghost has been seen wandering endlessly.
The show's resident historian, Richard Felix, says that most of the hauntings are not malevolent hauntings, they are "benign ghosts, ghosts that are possibly quite happy to be around here, but in the joiners' shop it's a different situation." Richard says that in this building there are dark evil shadows seen walking around and guests have reported feeling a foreboding atmosphere. Horses hooves have been heard outside the workshop and people have been dragged off their chairs inside.
The commissioner's house is said to be the most haunted building on the dockyard, with plenty of sightings of apparitions, including the ghost of a former commissioner. There's also the lingering spirit of a woman called Mary who roams the upper floor. She's said to have taken her own life by hanging herself from the back stairs in this building.
Before the nighttime investigation, psychic artists, Brian Shepherd went to the attic of the commissioner's house where he sketched an image of a female presence that he picked up on. He saw her taking blankets from a cupboard and standing in the window. He also picked up on the stronger energy of a naval man, who was full of remorse after letting his country and family down in war.
The sail and colour loft is where ships' flags and sails were once made and many who worked here often reported seeing a woman wearing a long flowing dress accompanied by the strong smell of lavender. They would also report being touched on the shoulder whilst they were working.
The show's paranormal investigator, Phil Whyman, thinks that the dockyard is an incredibly active place, "we stand a good chance of catching something on camera today."
Once Derek Acorah, the show's psychic medium arrived, the team started their investigation in the commissioner's house. After this, they moved on to the joiners' workshop, where they switched their cameras to night vision. While in this area they heard several loud knocking sounds that they couldn't explain. Yvette described the building as "a horrible place that effected us all." This was especially true of Derek who seemed to be possessed by the spirit of an aggressive man named Richard Neville.
The episode ended with a séance in the attic in the commissioner's house including the whole team, where once again Derek became possessed by the spirit of a nine-year-old boy called Barney Little and then an obnoxious female entity named Lizzie who tormented and punished young Barney in life.
For reviews of all of the new episodes, plus highlights and evidence from the shows, and to find out when Most Haunted is on next, visit the Most Haunted episode guide.
Add A Comment
Tags:
paranormalmost hauntedtelevisiontopicalkentshiver