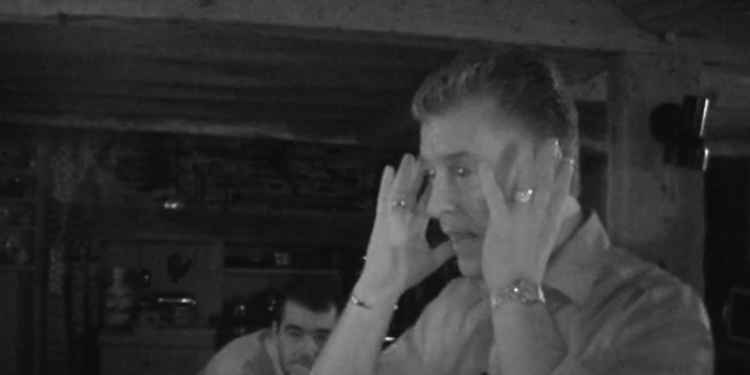 The team investigates a stunning Grade II listed country house in Surrey, where medium Derek Acorah senses strange goings-on and picks up the name of Ruth.
The beautiful Surrey countryside, known for quaint villages and picturesque views, but behind the facade of quiet country life lies the Clock House, a place so haunted that the current owners called Yvette Fielding and the team in to investigate.
In many years from now, the property's owner, Fred Batt, will go on to become a regular member of the Most Haunted team as the resident demonologist. In this episode he reveals that the mysterious woman who haunts his property could be a 1950s hostess who is said to haunt his London nightclub, Caesar's.

Deep in the Surrey Hills lies a manor that has housed families for over 900 years, it was built in the 12th century and was originally a farmhouse. In 1307 John Rizzbregg occupied the house with his family, but who lived her since that has been lost over the years.
Two monks have been seen in a corridor that joins two parts of the house, although the show's resident historian Richard Felix says they're more likely to be priests. On the upper floor ghostly footsteps have been regularly heard and a door opens and closes on its own. The living room is said to be the most haunted room in the property, a strange mist has been caught on camera here and a cavalier, a knight and a monk are all said to haunt this room.
Fred talks about a photo he took which he thinks shows the ghosts in the living room, the show's paranormal investigator, Phil Whyman, calls the shapes capture in the picture "ectoplasmic mist".
To get us in the mood, Richard gives us a quote from the American poet, Longfellow.
"All houses wherein men have lived and died. Are haunted houses."
Henry Wadsworth Longfellow
Derek Acorah, the show's psychic medium never knows anything about the property he's visiting. This is even more likely this week as the house is a private dwelling and the details of its haunted history aren't publish anywhere, so it wouldn't be possible to research the location in advance.
Despite this Derek did make some fairly accurate claims about the property. Early in his walk around he picked up on the spirit of a solider who he linked to the Knights Templar who apparently had a link to the area. Derek was then drawn towards a priest hole in the bathroom, near to where the spirit of the priest has been seen. Priest holes were used to hide priests during the dissolution of the monasteries.
Derek also picked up on the exact door which is said to open and close on its own, saying it's the spirit of the priest that does it to get attention.
He then tells Fred that he has been reincarnated, and this pleases the spirits of the house as he's currently renovating it. Apparently he is the reincarnation of Baron De Rizzbregg, a past occupant of the house. Moving into the next room he picked up on the essences of a spirit called Elizabeth, according to the records there was a servant called by that name who worked in the house.
Later in the living room Phil saw a flash of light, which coincided with Yvette feeling something blowing in her ear.
Derek suggested that the best way to experience paranormal activity in the house was to sit quietly and wait, so the team spent the next three hours sat in the dark. Eventually Yvette got bored and went to explore the upstairs of the house on her own. While alone in the dark she heard one of the motion detectors that had been placed in the upstairs corridor go off, Yvette offered no explanation for this. Seconds later the alarm was triggered again. Despite having locked off cameras in the hallway, we weren't shown what set the motion detectors off.
Towards the end of the episode Derek picked up on a female spirit by the name of Ruth, who he said is attached to Fred. Fred thinks that Ruth Ellis, the last woman ever to be hanged in the UK, haunts his club. Derek confirms this and says that Ruth's spirit follows him home. In next week's episode the team take a trip to Fred's club, will Derek find out more about this spirit there?
For reviews of all of the new episodes, plus highlights and evidence from the shows, and to find out when Most Haunted is on next, visit the Most Haunted episode guide.
Tags:
most hauntedparanormaltelevisiontopicalsurreyshiverfred batt