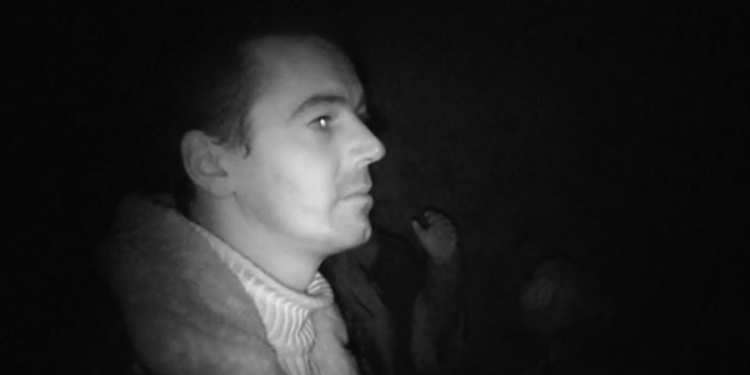 Yvette Fielding and Derek Acorah visit the West Wycombe Caves, the site of the notorious Hell-Fire club's satanic rituals, hoping something will go bump during their nighttime vigil.
The elaborate network of manmade caves were excavated in the late 1740s and 1750s to give unemployed farmers work quarrying chalk to build a new main road into nearby High Wycombe.
The caves, which extend 500 metres underground, it's said that the caves were used by Sir Francis Dashwood to hold secret meetings of the famous Hell-Fire Club. The notorious gentlemen's club was through to be involved in sexual rites, orgies, abuse of alcohol and Satanism.

Now the caves are open to the public and ever since visitors have been coming here there has been plenty of paranormal activity reported, including strange shapes which have been seen floating toward unsuspecting visitors and a gentleman in Victorian clothing who follows guests before vanishing.
In the banqueting hall, a lot of debauchery is said to have taken place. It's claimed that a young girl named Suki was lured down here on the pretext of getting married. She entered the caves on that day wearing a wedding dress to find her betrothed wasn't there and it was all a cruel joke, which went horribly wrong when tempers flared and a stone was thrown at Suki, killing her. Ever since the ghost of this young girl has been seen wandering through the caves in a Victorian wedding dress.
The show's spiritualist medium, Derek Acorah, joined the team for the investigation and straight away picked up on the spirit energy of the female spirit who haunts the caves. He later confirmed this was Suki by recounting the story of her demise and the prank that lead to her death. He also picked up on the energy of Paul Whitehead, a poet and the steward of the Hell-Fire Club. When he died he asked for his heart to be places in an urn in the caves. Derek also became aware of the spiritual energy of Francis Dashwood himself.
During their walk around, Derek was interrupted several times by a strange sound like a cry and the sound of a stone hitting a metal gate. Later during the nighttime vigil using the night vision cameras, several members of the team reported hearing strange sounds and even being touched. The team also found a gate open, which had previously been closed during the investigation.

Most Haunted Was Here 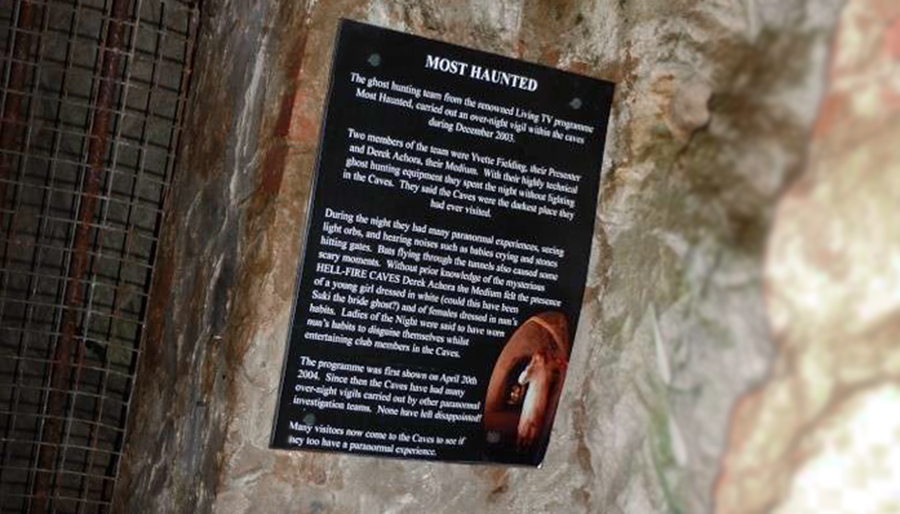 A sign now on the wall in the caves marks Yvette and the team's visit to the West Wycombe. The sign reads:
"The ghost hunting team from the renowned Living TV programme Most Haunted carried out and overnight vigil with in the caves during December 2003. Two members of the team were Yvette Fielding, the presenter and Derek Acorah then medium. With their highly technical ghost hunting equipment they spent the night without lighting in the caves. They said the caves were the darkest place they had ever visited."
"During the night they had many paranormal experiences, seeing light orbs and hearing noises such as babies crying and stones hitting gates. Bats flying through the tunnel also created some scary moments. Without prior knowledge of the mysterious Hellfire Caves, Derek Acorah, the medium, felt the presence of a young girl dressed in white (could this have been Suki the Bride ghost?) and of females dressed in nuns' habits. Ladies of the night were said to have worn such attire to disguise themselves whilst entertaining club members in the caves."
"The programme was first shown on April 26th 2004. Since then the caves have had many overnight vigils carried out by other paranormal investigation teams. None have left disappointed."
"Many visitors now comes the caves to see if they too have paranormal experiences."
For reviews of all of the new episodes, plus highlights and evidence from the shows, and to find out when Most Haunted is on next, visit the Most Haunted episode guide.
Tags:
paranormalmost hauntedtelevisiontopicalbuckinghamshireundergroundshiver