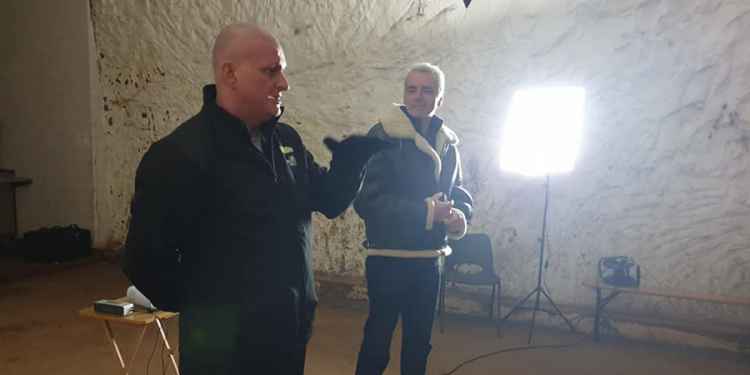 Photo: facebook.com
I've attended many paranormal and ghost hunting events over the last few years, but over the Easter weekend I headed to Drakelow Tunnels near Kidderminster to look for evidence of the paranormal with two television stars.
I've already been on and reviewed a ghost hunt at Drakelow Tunnels, but I've never been to an event with celebrity ghost hunters before, so this page will focus on whether my expectations of a celebrity-led event matched the reality of it. I didn't really know what to expect, so if you're unsure too, hopefully this review might help you to decide whether to book on to a similar event or not yourself.
The event was run by Most Haunted Experience and tickets cost a little more than a regular ghost hunt, but includes the chance to meet two of the stars of the long-running paranormal television show, 'Most Haunted', as well as take part in séances and paranormal experiments with them.
The company run various events around the UK with different members of the team attending, including the show's host Yvette Fielding. On this occasion it was Yvette's husband and the show's co-creator Karl Beattie along with long-time team member Stuart Torevell.
I have to admit, the reason I hadn't done a celebrity event up until this point was because I worked in media for 15 years and have met hundreds of celebrities, everyone from Jedward to Lady Gaga. So I'm a bit jaded by celebrities and I don't normally get much out of meeting people who potentially have egos. So although I love 'Most Haunted', I avoided the celebrity events. It turns out I couldn't have been more wrong. Both Karl and Stuart were so nice and down to earth, a pleasure to meet in person and not even a hint of an ego between them.
I'd been to Drakelow Tunnels a few times before, so I was familiar with how events work here, and the celeb event started in much the same way. The guests walked into the former Second World War underground aircraft factory guided by a trail of candles, which were the only source of light in the now abandoned subterranean complex.
We gathered in the base room, which was originally a canteen and kitchen area constructed within the tunnels more recently when it was on standby as a nuclear bunker during the Cold War. After the usual health and safety and welcome video, Karl and Stuart came into the room and gave a brief introduction.
After that the pair started circulating to meet the guests. Me and those I was attending the event with just so happened to be the first group that Stuart came over to. It's fair to say that Stuart is an incredibly friendly and chatty guy who speaks passionately about 'Most Haunted'. My friend got really stuck in and asked Stu about some of the show's more controversial moments, a topic that Stuart didn't shy away from and was clearly very happy to talk about. I could see from my friend's face how happy he was to be chatting to Stuart, having watched him on television for so many years.
I wasn't sure how much time we would get with Karl and Stuart at an event like this, but by the time we were all asked to get up to take part in a group photo, I almost felt a little bad for taking up so much of Stuart's time and stopping him getting around to other guests, but I'm sure they got their chance throughout the night too. 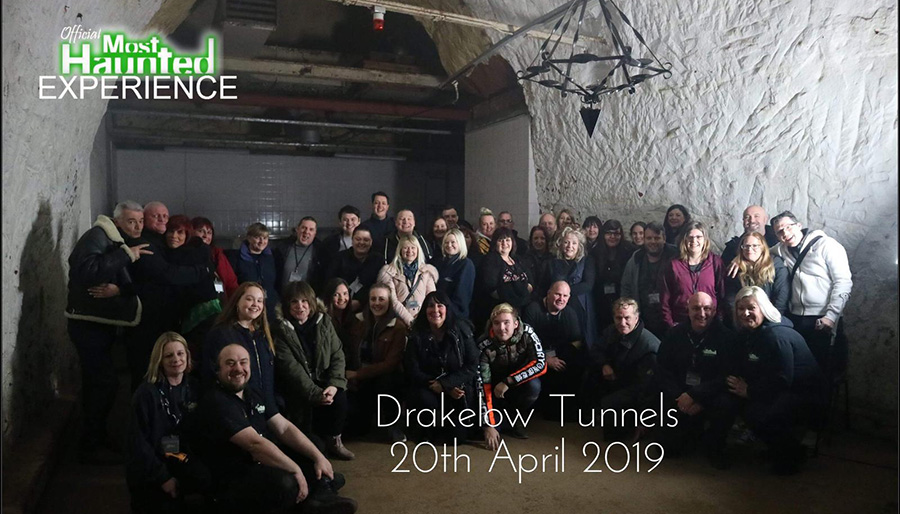 After the group photo we were taken out into the disorientating maze of 3.5 miles of tunnels by some of the event staff. The location featured in a 2014 episode of 'Most Haunted' and has a grim past. According to newspaper reports at the time, at least three men were killed by a roof fall while digging out the tunnels in the 1940s, there are reports since of factory workers being killed underground after being hit by trucks and while riding conveyor belts.
Plus the tunnels were excavated under an ancient hill fort which had its own graveyard where hundreds of bodies were buried. During the tunnelling the dead were disturbed and as a result a "demon guardian" of the burial ground is said to take a disliking to anyone who enters the tunnels.
The group vigils were as I would expect and had previously experienced on ghost hunting events. They involved the use of various ghost hunting gadgets. I was given a Flir thermal imaging camera to play with, which was something I'd never got to try out before as they're a pretty expensive bit of kit.
We spent about an hour and a half in the darkness calling out and trying to encourage the spirits of Drakelow to make their presence known and trying to make contact via Ouija boards and through tapping.
After that we headed back to the base room for a break, where there were free hot and cold drinks and snacks, which included jammie Wagon Wheels... what more could anyone want? Once again Karl and Stuart were mingling and I was lucky enough to get some time with Karl. Karl was incredibly nice, very friendly and made me feel very welcome at my first celebrity event. The conversation with Karl was more on a personal level rather than the geeky chat about the show I'd had with Stuart earlier in the night.
As the break came to an end, my girlfriend took the opportunity to ask to have a photo taken with Karl, something he is very happy doing. Then it was back out into the darkness to continue the investigation. 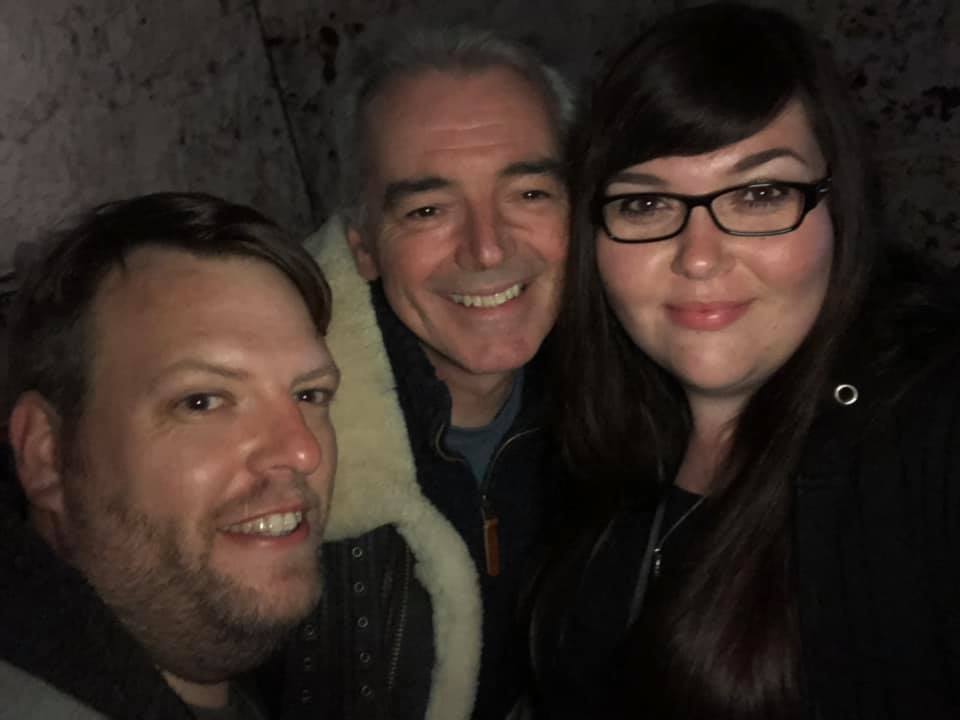 🖤
During the second part of the investigation, Stuart came to join our group. I was luckily enough to end up taking part in a table tipping experiment with Stuart. It involved four of us stood around a small table taking it in turns to call out and encourage any spirits present to rock or move the table.
It was quite an honour to be able to do this with Stuart, especially in such a small and intimate setting. Although the Most Haunted Experience team are very good at calling out to the spirits, Stuart is a cut above the rest and it was great to experience it in person. He calls out very naturally, confidently and passionately. Listening to what he said and how he said it showed that what he was saying came from a place of total belief in the paranormal.
This was a highlight of the evening and admittedly, not everyone gets to do this at an event, it was just myself and two other guests at the table, but I just happened to be in the right place at the right time. Getting stuck in and involved in the group activities will increase your chances of working with the team members directly. 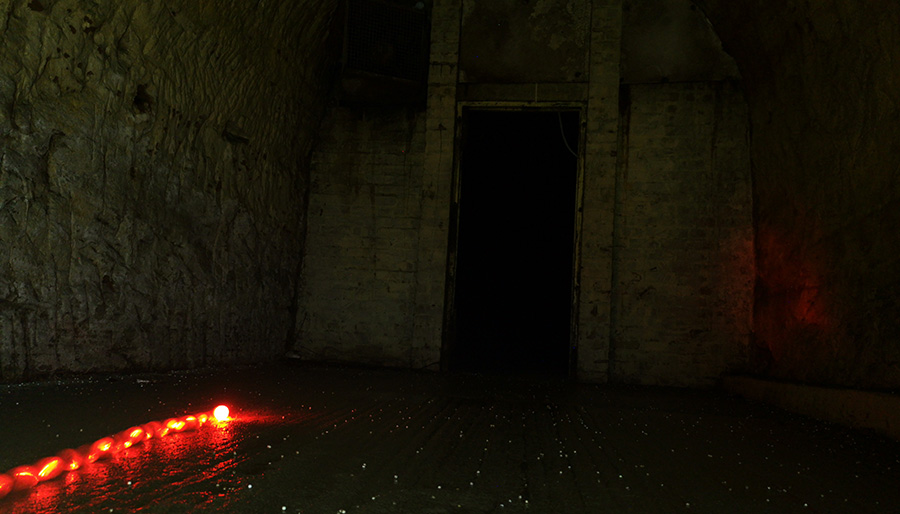 After the team wrapped up the second half of the investigation, we then broke out into free time where we could explore the tunnels on our own, a chance to conduct any paranormal experiments we wanted or return to one of the locations from earlier in the night. During this time Karl and Stuart wandered around the location, calling out and getting involved with the guests. We tagged along for a bit before going for a wander and exploring more of the complex, which covers an area of over 26,000 square meters.
For me the night ended back in the base room, where I got to witness Karl interacting with fans of the show in a very natural and relaxed way. It's very obvious that Karl loves being on these events and meeting viewers. The conversation was packed full on in-jokes and innuendo, which was funny to listen to even if it was a little hard to keep up with as a relative outsider. The discussion involved talk about Stuart spreading his "demonic seed", an image that will haunt me for life.
Overall the event was brilliantly run by Jenny, the whole team and Karl and Stuart themselves were very friendly, welcoming and chatty. After just a few hours with them, many of them now feel like friends.
If like me you're a little unsure about spending a night in the dark with television personalities, then you shouldn't worry. This event was as good as any other paranormal event I'd been on, with the added bonus of meeting some really passionate ghost hunters along the way, which made it the most fun and exciting event of its kind I've been on.
To find out about booking your own ghost hunt with a member of the 'Most Haunted' team, visit mosthauntedexperience.com.
Tags:
paranormalworcestershiremost hauntedghost huntsdrakelow tunnelsundergroundmost haunted experience