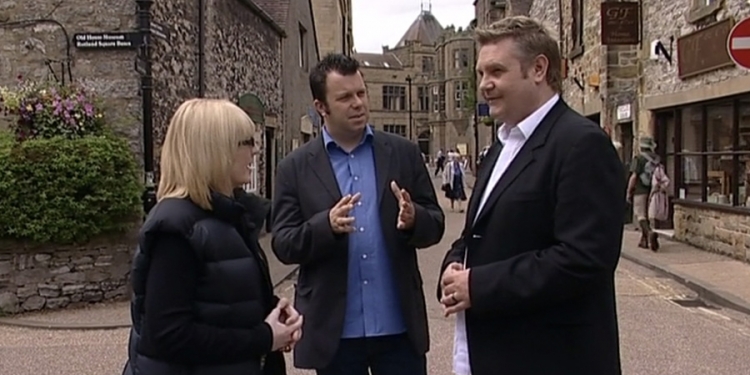 Yvette Fielding and the Most Haunted team embarked on a series of unique investigation as part of the spin-off series Midsummer Murders. Throughout the series Yvette and co attempted to uncover the the mysteries surrounding some of Britain's most gruesome murders.
In each of the episodes, Yvette is joined by Most Haunted's regular historian, who sets Yvette and her team the task of solving age old unsolved mysteries. Yvette is helped along the way by a psychic medium and parapsychologist Ciarán O'Keeffe, as well as some other familiar faces from the Most Haunted team.
It's over a decade since Most Haunted: Midsummer Murders was last shown on television, but how much can you remember about the team that made up the show, the locations they visited and the paranormal activity they encountered?

1. Which of the locations that Yvette and the team visited during Midsummer Murders is said to be the most haunted village in England?

2. Where on the hilltop overlooking Stoney Middleton did a woman once jumped from a cliff edge?

3. What was the name of the pub where the team encountered the spirit of Mac in Stoney Middleton?

4. Which of these locations did NOT form part of the team's investigation at Tutbury?

5. How many episodes of Midsummer Murders are there?

6. In which Midsummer Murders location did the team visit a secret nuclear bunker?

7. What was the name of the Tudor mansion near Nantwich that the team investigated?

8. Which famous show caves did the team investigate at Castleton?

9. What are Dering Woods in Pluckley better known as by the locals?

10. Which member of the team was forced to leave the investigation at Elvey Farm in Pluckley after the spirit got aggressive?

11. Grace, the ghost that haunted the Headless Woman pub near Tarvin, was beheaded in a guillotine?

12. What is the name of the show's resident historian who sends the team off on their investigations?

13. Which of these locations did the team NOT investigate while in Ruthin?

14. Which member of the team became emotional during a vigil in Tutbury?

15. Which of the show's regular psychics joined Yvette throughout Midsummer Murders?

16. In which English county is the unassuming village of Tarvin, the location for episode seven?

17. Which member of the team conducted a successful EVP experiment in the toilets at the Headless Woman pub near Tarvin?

18. Which farm on the outskirts of Bakewell do the team investigate?

19. Which members of the team waded through the cold, dark waters in the caves beneath Castleton?

20. In which year was Midsummer Murders first shown on television?