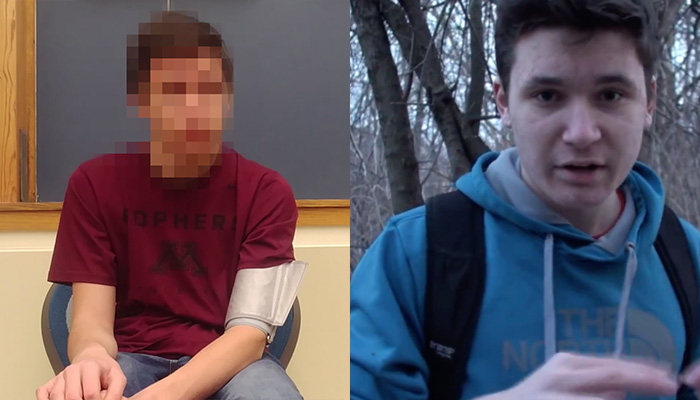 Photo: youtube.com
You can't fail to have heard of Noah, the teen with a pixelated face who claimed to be a time traveller from the year 2030 in a video testimonial posted on YouTube in November 2017, but now it seems that the face behind the pixels has been revealed.
After making his initial claims, Noah went on to take a lie detector test in a video to prove his story was true and made several predictions about Earth's future, including the controversial claim that Donald Trump will be elected for a second term. In the video speaking with his face hidden and through a voice changer he said, "the president of the United States after the 2020 election will be Donald J Trump."
After gaining plenty of press attention as a result of his tearful confession, the internet has been trying to verify or debunk his story ever since. As you might expect, making an extraordinary claim as Noah did will always lead to a great deal of speculation and in group chats people have been working on disproving, debunking and exposing Noah.
Of course, sooner or later, the stunt ends and those behind it are outed. It's happened time and time again. Who can forget Lonelygirl15, the vlogger who had the whole world convinced that she was part of a secret cult, until it was revealed that her videos were part of a fictional story created by an L.A. production company.
It seems that now, Noah's time is up and we're finally able to see the face behind the pixelated video and it's all thanks to an alleged leak. Noah's rise to fame on YouTube has been orchestrated by a channel called Apex TV and its sister channel, Paranormal Elite.
An anonymous informant, who is said to be close to Apex TV's creator, has come forward with not just a real name and identity for Noah, but also recordings of private telephone calls which are alleged to be with the creators of the time travel videos. In the calls the unverified voices admit that they have faked the whole thing.
In the audio clips the unknown informant discusses the prank with another male, his voice sounds just like that the voice which features in Apex TV's videos. In the second call the informant speaks to a second male voice.
Although we've only ever heard Noah's voice through a voice changer up until now, the way the person in the second call talks is very similar to how Noah talks in terms of grammar and mannerisms. It's claimed this this is the voice of the person who poses as Noah in the viral videos.
In the recording the voice alleged to be Noah talks about how they found a man to play the role of a future version of Noah in a library. According to the informant Noah just walked up to the man and asked "do you want to be a time traveller?" The voice on the call believed to be Noah confirms this, "yeah I purposely chose a big guy because then people would freak out about it."
Later in the call the teen talks about how he got into character to play the role of a distressed time traveler stranded in the past. In the original video Noah is seen to breakdown in tears. The caller, presumably unaware he's being recorded says, "everyday when I get back from school, my eyes are really hot and everything and it pretty much can make me cry on command [...] I just thought, what if in this video I cry."
The recording ends with the voice explaining exactly how he faked specific elements of Noah's videos, including the famous video which featured Noah undergoing a lie detector test. Noah said "the lie detector test is something I made myself, it wasn't hooked up to anything." He then talks about an x-ray image that the channel published which was supposed to show a futuristic chip embedded in Noah's hand, which he admits was nothing more than a Photoshopped fake.
As the call recordings have been leaked by an anonymous source, it's impossible to say for certain that the people in the recordings really are those behind Apex TV and the Noah prank. However, the informant also revealed Noah to be a YouTuber called Denizerge. The videos on his channel give us our first glimpse of Noah's face, without it being distorted by heavy pixelation.

Noah Without The Pixels On His Own YouTube Channel

In one of Denizerge's videos entitled 'Selling Myself On eBay' he shows off his new bedroom and at one point stands in front of a door with a very distinctive decal on it. The door is set in a red wall and to the right-hand side of it there's a black picture frame hanging on the wall. This is the exact spot where the original Noah video was filmed confirming the informant's claim that Denizerge is in fact Noah. 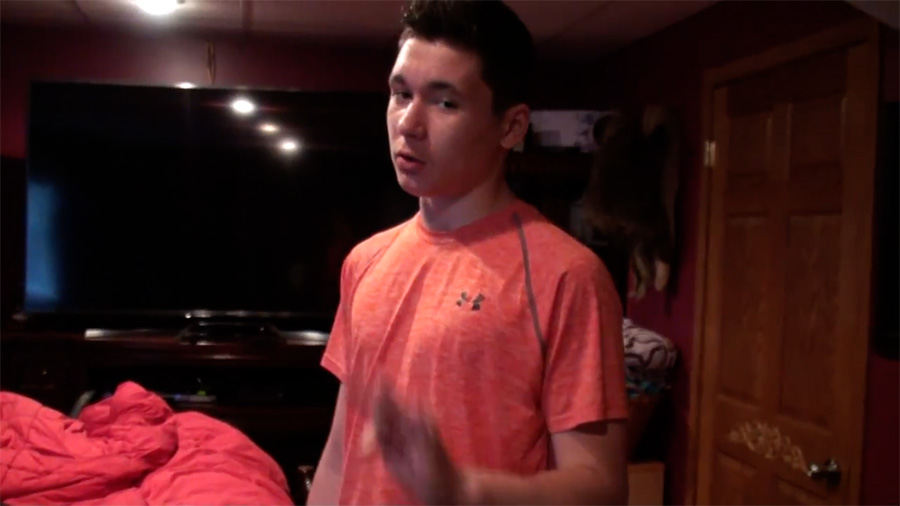 Photo: youtube.com
The source behind this information leak is said to be someone who was close to Apex TV, but has outed them after a falling out. Some have speculated that this falling out might revolve around the unethical way that Apex TV are cashing in on the gullible and vulnerable by charging their followers large sums of money to ask their fake time travellers questions during live streams. Some think that misleading the public in this way and profiting from it is nothing more than fraud.
Even before this information was leaked, one thing was very obvious... Noah's story clearly isn't true, and nor are the stories of the many other alleged time travellers who feature on Apex TV and Paranormal Elite's channels. Since posting Noah's original video, which has notched up more than two million views so far, they've uploaded many more time traveller videos in a desperate attempt to repeat its success.
I think Paranormal Elite and Apex TV are a little out of their depth with this hoax and it wouldn't be the end of the world if the hoax came to an end. Between the two channels they've made some great content in the past, some of which is actually much better than any of the time travel videos. For example the video I wrote about last year, which purported to show a mermaid washed up on a beach in Minnesota.
The vast majority of people know the time travel videos are fake anyway, so giving up on these videos and finding another strand of content that works would give their channel much more longevity. I'm sure as standalone pieces of content, some of these new videos would still be newsworthy, would go viral and would fool the more gullible amongst us.
Add A Comment
Tags:
time traveltopical