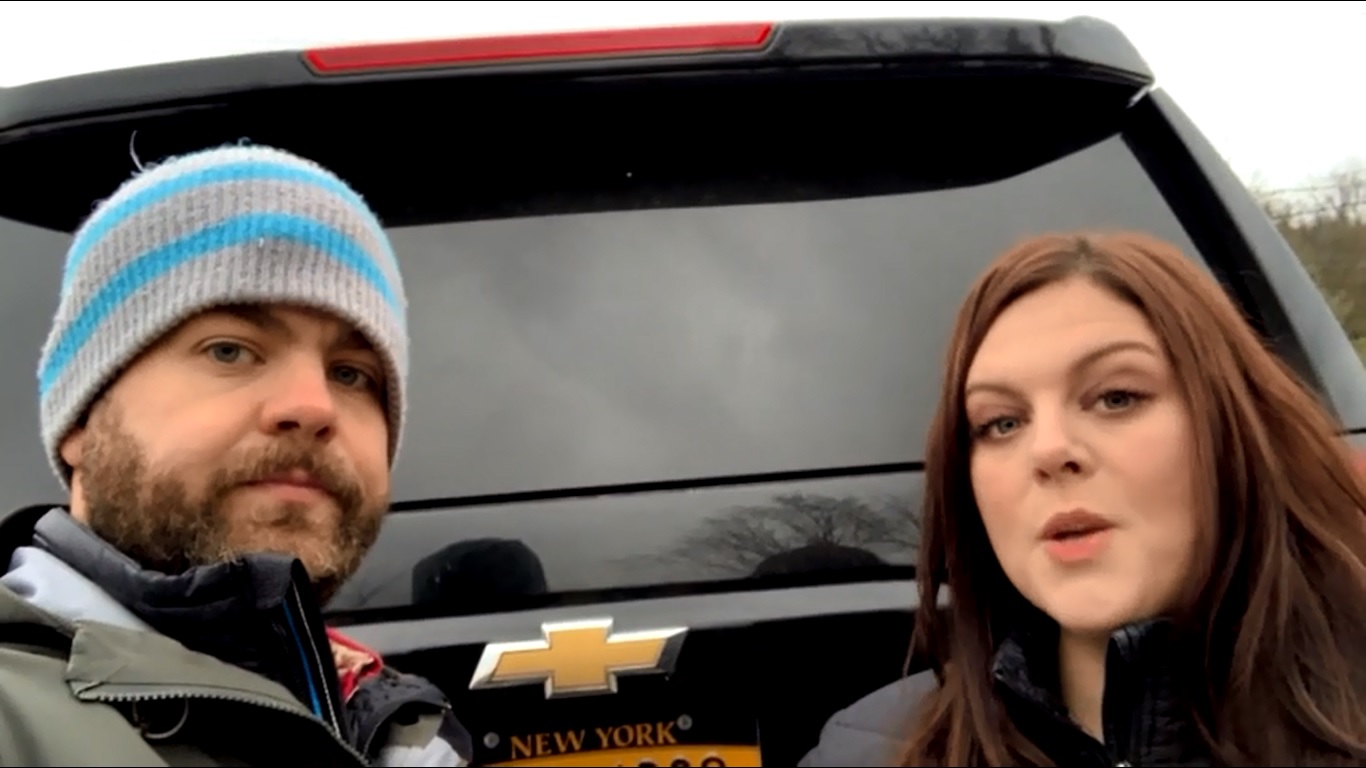 In the second episode of Jack Osbourne and Katrina Weidman's new ghost hunting show, the duo investigate the ghostly-goings on at a legendary honky-tonk in Kentucky, that is considered by many to be the most haunted place on Earth, but is it also a portal to Hell?
Jack thinks so, he says "I think there could be a portal here. There is definitely activity here that lends itself to the portal theory."
Weirdly this episode wasn't the second when the series first aired in the US back in April.
After arriving at the location in Kentucky, the first thing Jack and Katrina tried to do was get to the bottom of some of the myths that surround Bobby Mackey's Music World. For decades there's been rumours about the location, most commonly it's said that the music venue is built on the site of a former slaughter house.
Laura Roland, who runs the location's regular ghost tours at the venue, says that the land was used as a distillery before the current building. Cattle were kept on the land, but it wasn't a slaughterhouse.
However, Jack does discover stories of death and murder attached to it, including the death of the venue's former caretaker, Carl Lawson. Apparently Carl felt like he was possessed and even claims that a demon tried to drown him in the bath in his apartment above the club.
There are also stories of Satanic rituals being carried out on the grounds of the club, on the bank of the river that flows past the venue.
Visitors to the property often report being scratched, having objects thrown at them, and even claim to have been effected by the building after leaving and taking a souvenir with them without permission.
Katrina wonders why the location is so paranormally active. She says it could be as a result of what lay here before, "something about the land that Bobby Mack's sits on that could be causing the activity." She also speculated that it could be that a séance was held here which inadvertently opened a door, or perhaps the more sinister explanation that people opened a portal on purpose using witchcraft, possibly even calling through one specific demon.
On his initial walk around with Laura, Jack went to visit the well in the basement. The hole was dug by Carl, who felt like he was told to dig the hole - Laura believes this hole is the portal to Hell.
Jack seems convinced by the location's reputation. He said, "I'm getting the sense that whatever's here is actually an intelligent spirit, meaning it can communicate."
Jack and Katrina were then joined by Bobby Mack and some of Laura's customers, past ghost hunters. All 14 of them have had paranormal encounters at the location. Katrina asked if they felt their experiences had been positive or negative. The response was overwhelmingly negative and the guests went on to talk about being touched and being followed home after their investigations there.
The round-circle, "haunting anonymous" session was a really nice touch and something I've not seen on a ghost hunting show before. It was good to see how many real people had been genuinely effected by the location, especially as Jack pointed out, that their stories all seem to match.
The duo then went to a safe location to meet Bishop James Long, who conducted an exorcism at Bobby Mack's. He 100% believes and knows that the venue is haunted by a demonic infestation.
Bishop Long said that the location is definitely a portal to hell, but reminded the investigators that a portal is nothing magical. He said, "if I use this cup to communicate with a demonic entity, this cup is now a portal." He says this is exactly what happened in the well area of the club.
The Bishop said there is no question that demons and possession exists. The bishop's strong advice was to stay away, but if they do go back to the location they should not provoke anything there. He gave them a gift of holy water and a protective bracelet. 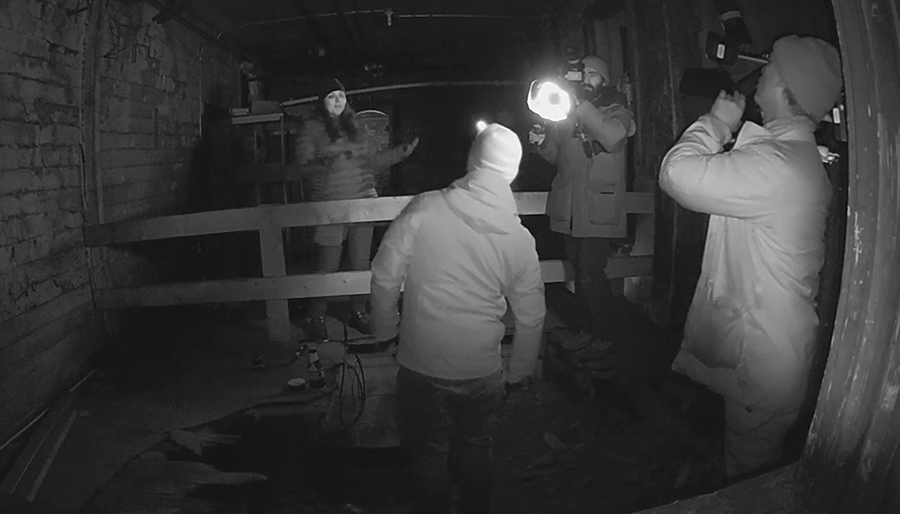 Starting in an area called the "creepy corner" which is said to be one of the most active parts of the building. Katrina began by using a ghost hunting gadget that scans through a data bank of phonics. It's said that ghosts can use and manipulate these sounds to communicate. Although, she warns that a lot of what comes through will be "gibberish" and they should discount anything unless it's an "intelligent response".
The device's speaker spewed out the word "white", which they thought might have been one such intelligent response as it possibly relates to the show's producer, Elaine White.
The team then moved on to Carl's apartment, where they attempted to capture spirit voices as EVPs using an audio recorder. Katrina called out to the spirits, or perhaps demons, in the apartment and asked several questions in the hopes that they answers might have been captured in the recording. One of her questions was "can you tell us if there's a portal here?" Which was odd as I don't think a caretaker would know what a paranormal portal is. The EVP recording was never played back so presumably nothing was caught.
They weren't there long before they both agreed that the room felt calm. Jack went as far as to say that the apartment felt homely. So they moved on to the basement and the area where Jack dug his well. The well also seemed quiet, which surprised both of the investigators because of the building's dark reputation.
They decided to shed their protection that was given to them by Bishop Long in an attempt to get a reaction from the club's demons, and ignoring his advice, Katrina attempted to provoke the demons - but the location still proved to be quiet. It was actually really refreshing to see a paranormal show making a point about a location being quiet. It certainly makes their investigation seem more legitimate.
To try to find out a little more about whatever it is that haunts Bobby Mack's, Jack called in a psychic friend of his, Cindy Kaza. She attempted an automatic writing experiment, which involved Cindy holding a pen and letting the entities take control of her hand in order to write answers to questions.
While concentrating on the paper, Cindy started to get aggressive messages coming through. Cindy then told Jack and Katrina that the spirits had told them they shouldn't be here and they're going to get hurt. She then relayed a message to Katrina, "I don't want the bitch talking to me, she's a whore."
Gaining an insight from the voices in her head and the words forming in front of her on the paper, she said, "the portal has been here for longer than you've existed".
She then told them that there are two portals up stairs and one down in the basement that she described as being "below", so presumably the well. The entities told her that they control how often they are opened and how much negativity comes through.
After a promising start and a realistic investigation, it was a shame to see it come down to a display of mediumship. With ghost hunting the aim is to collect evidence, with mediumship none is possible. You just have to take the word of the person spewing out these feelings.
Portals To Hell continues next week on Really as part of the channel's #Freakend event, bringing viewers two nights of paranormal entertainment every Thursday and Friday.
You can watch in the United Kingdom and Ireland as part of the Discovery family of channels. You can watch Really on Freeview (17), Sky (142), Virgin Media (129) and Freesat (160), plus YouView, BT TV and TalkTalk TV. Or watch previous episodes on demand on dplay.
Tags:
paranormaltelevisiontopicalportals to hellkatrina weidman