Jack Osbourne and Katrina Weidman return to explore the supernatural dark side in the new episodes of 'Portals To Hell' streaming exclusively on Discovery+. 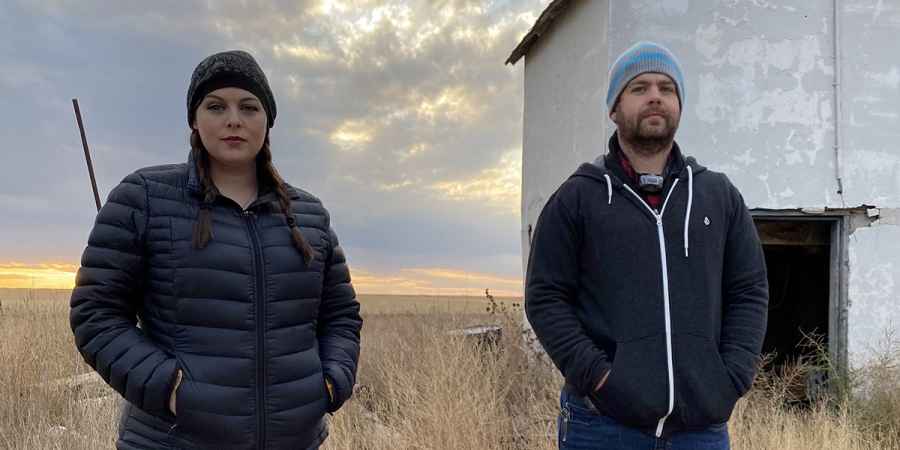 'Portals To Hell' returns with brand new episodes beginning Saturday, March 20 exclusively on Discovery+ and sees Jack and Katrina face off against startling paranormal activity once again, investigating creepier-than-ever locations with supernatural secrets so dark and sinister, they may be downright demonic.
The new episodes will be available to fans of the paranormal in the US and the UK from March.
The hit US ghost hunting show kicks off with a two-hour special, which sees the duo dig into the twisted and terrifying tale of a sprawling farm that once was home to a family of serial killers and is now said to be haunted by its evil history.
Armed with their paranormal expertise, advanced scientific equipment and techniques and a network of specialists, including psychic mediums, Jack and Katrina search for answers to these disturbing hauntings. Two new episodes begin streaming on March 20 and seven additional episodes will continue to launch weekly, every Saturday thereafter.
"Jack and I have investigated many places, but we were both taken aback by how complex and intelligent these hauntings seem to be," said Katrina. "There were a number of times we really felt something was among us. It's scary, but as investigators, it gives us insight into the many layers of a haunting."
"This was one of the most mind-bending legs we've done," added Jack. "These places have such deep, dark hauntings and energy so intense and powerful that you can actually feel it throughout your entire body. When you physically experience the paranormal, it gives you a massive adrenaline rush, but it's also incredibly unsettling. There were moments when I just wanted to get the hell out of there."
Their chilling journey begins with a special two-hour investigation of an expansive Colorado ranch that was once home to vicious father-son serial killers, whose evil acts left a haunting imprint on the property. In 1983, the small town of Stratton, Colorado, was rocked when it was revealed that local resident Michael McCormick and his father, Tom, carried out a string of gruesome murders on the family farm. The duo had been killing for years, and while all the victims reportedly buried on the grounds have never been discovered, there are estimated to be as many as 17.
Now, the farm's current owners are grappling with an uptick in intense paranormal activity that has left their family and employees fearful to even be there. In a television first, Osbourne and Weidman investigate the former McCormick property, attempting to uncover answers about its murderous past – and what it is they're facing now. Are these killers still stalking victims from beyond the grave? Or have their evil deeds opened up a true portal to hell?

McCormick Farm
Streaming from March 20
In a two-hour-long television first, Jack Osbourne and Katrina Weidman gain unprecedented access to investigate the former McCormick property in Stratton, Colorado, once home to father-son serial killers, Tom and Michael McCormick. The duo had been killing for years, and while all the victims reportedly buried on the grounds have never been discovered, it is estimated there are as many as 17. Since buying the farm shortly after the murders, the current owners have experienced paranormal activity all over the property, and that activity is growing in both frequency and intensity. With their investigative tools, paranormal know-how and help from psychic Shaun Crusha, Osbourne and Weidman set out to find who, or what, is haunting the farm.
Hotel Monte Vista
Streaming from March 20
Jack Osbourne and Katrina Weidman travel to Flagstaff, Arizona, to investigate the Hotel Monte Vista, a popular tourist attraction dubbed one of America's most terrifying places. Known in its heyday as a hub for the rich and famous, the Monte Vista is equally notorious for its long rap sheet of illicit activity and is now spooking guests with unsettling, poltergeist-like activity. While probing this paranormal hotspot, never before investigated on TV, the team encounters terrifying activity of their own.
Grant-Humphreys Mansion
Streaming from March 27
Jack Osbourne and Katrina Weidman investigate Denver's Grant-Humphreys Mansion, a 30-room palace beset by scandal, death and a skeptical client. Former owner Albert Humphreys is believed to have shot himself inside the mansion, but mystery still surrounds his death. Now operating as a wedding venue, staff and patrons experience apparitions, shadow figures and more. The team's investigation marks the first time the property has been investigated on TV and sparks wicked paranormal activity. With the help of psychic Cindy Kaza, Osbourne and Weidman come to believe this mansion may house a true portal to hell.
The Stephenson Building
Streaming from April 3
Jack Osbourne and special guest investigator Heather Taddy travel to the Stephenson Building in Wymore, Nebraska, a former dancehall and brothel turned oddities museum full of dark, cursed items, that has never before been investigated on TV. With negative paranormal activity amped up in recent months, the team is concerned the owners may be inviting in evil. During their investigation, and with the help of psychic Tyler Evans, they uncover that demonic activity could be influencing one of the museum's owners.
Captain Grant's Inn
Streaming from April 10
Jack Osbourne and Katrina Weidman head to Poquetanuck, Connecticut, to investigate the historic Captain Grant's Inn, believed to be Connecticut's most haunted home. The current owner, Carol, claims that shortly after she purchased the property, she was taken over by an evil spirit and took matters into her own hands, conducting an exorcism to eliminate the angry spirit. Following the exorcism, the paranormal experiences were mild, but soon Carol and her guests started to experience an uptick in ghostly activity. Now, Osbourne and Weidman seek to discover if these are historical hauntings or if there is something more sinister at play. The duo asks Carol to join the night investigation for an unprecedented experiment that leaves the entire team speechless.
Pennhurst Asylum
Streaming from April 17
Jack Osbourne and Katrina Weidman investigate Pennhurst Asylum, an infamous paranormal hotspot in Spring City, Pennsylvania. With its long and dark history of inhumane treatment of its patients, this sprawling campus is well-known for both powerful and diverse spirit activity. The pair enlist the help of guest investigator Heather Taddy and psychic Michelle Belanger to tackle the massive complex and its rampant hauntings.
Fulton Theatre
Streaming from April 24
Jack Osbourne and Katrina Weidman travel to Lancaster, Pennsylvania, to investigate the infamous Fulton Theatre. Built on the site of a brutal Native American massacre, this is the first time this building has ever been investigated by a paranormal team. With the help of psychic Chris Fleming, the team uncovers a haunted history that makes clear even the dead can be entertained by the living.
Lake Shawnee Amusement Park
Streaming from May 1
Jack Osbourne and special guest investigator Heather Taddy visit Lake Shawnee Amusement Park in Princeton, West Virginia, one of Travel Channel's Most Terrifying Places in America. The team is in for a grim ride at this abandoned park that has six deaths in its history, and is also part of a Native American burial ground. Psychic Michelle Belanger assists.
The Padre Hotel
Streaming from May 8
Jack Osbourne and special guest investigator Heather Taddy travel to Bakersfield, California, for a stay at the five-star Padre Hotel, a Prohibition-era inn that has never been investigated for television. Uncovering a dark and deadly past, the team, aided by psychic Michelle Belanger, soon learn that not all of the hotel's guests are living.