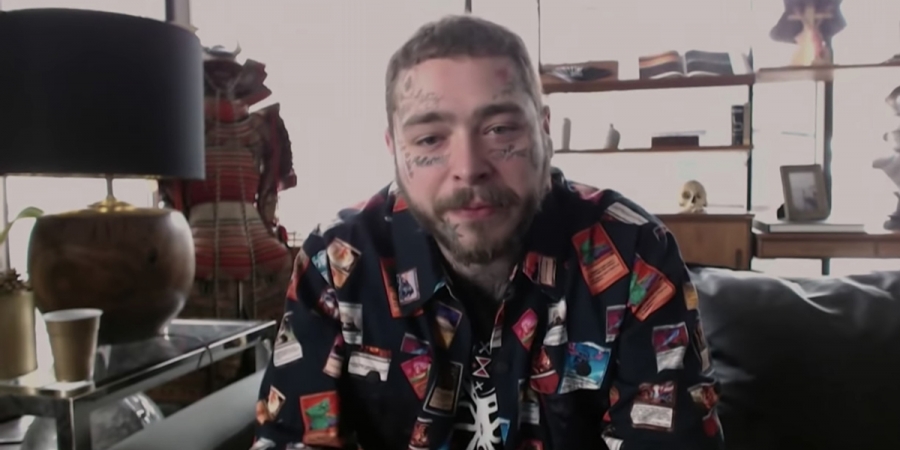 Photo: youtube.com
US singer-songwriter, Post Malone, has opened up to 'Late Night' host Seth Meyers about his string of bad luck following his encounter with television ghost hunter Zak Bagans' cursed dybbuk box.
Post visited Zak's Haunted Museum in Las Vegas back in 2018. During his visit Zak introduced the Grammy award winning singer to the infamous box. During the tour Zak removed the box's protective glass case and touched the box, before touching the rapper on the shoulder. Post now believes he has been cursed by the dybbuk.
Since his visit, Malone has been involved in an emergency landing in his private jet, his car was involved in an accident, and armed robbers targeted his home in San Fernando. Although Malone was unharmed and unaffected by these three events, Zak still thinks that it was the curse of the box that caused them.
The dybbuk box was originally nothing more than a family heirloom. It had belonged to a woman who made and sealed the box after World War II, but in 2001 her granddaughter sold it on. She warned that the box was supposed to contain a dybbuk, which in Jewish folklore is a restless, usually malicious, spirit believed to be able to haunt and even possess the living.
Zak paid tens of thousands of dollars to obtain the haunted artefact from its previous owner, who had been so terrified of the box that he kept it inside of a military grade box buried in the ground. Once in Zak's possession, the box was placed on display in his museum, where it's been blamed for a black cloaked figure seen moving through closed doors in the room it's displayed in.

Post says he's always had an interest in the paranormal and has experienced things in the past, but during an interview on 'Late Night With Seth Meyers' the singer admitted that his belief in the paranormal had gotten stronger after ghost hunting with the 'Ghost Adventures' team.
He added, "it's weird because after we opened up this creepy, creepy dybbuk box, I got in a car accident, I almost had a plane wreck, my house got broken into, all that type of stuff, but it was just within a month's time. It was really really odd."
During the interview, Post also spoke about his belief in extraterrestrials and UFO visitation. Last year, he revealed that he had his first UFO encounter at the age of 16. Speaking to Seth, he said, "here in Utah things are creepy if you look up into the sky. Sometimes I just go out at like 4am with my night vision goggles and just look up at the sky and see if we can see anything."
Because of current restrictions due to the pandemic, Post was talking to Seth via a video call from his home where he was having some construction work done. Seth asked the star if the rumours were true that he's getting a bunker built. Post joked that if he was, he'd save a place down there for his favourite ghost hunter, "Zak Bagans is definitely in here because if we need to fight of any demons or anything after the apocalypse."
The star added, "I love you Zak, text me!"
Two years after Post Malone's visit to the museum, Zak finally opened the dybbuk box in a special quarantine edition of 'Ghost Adventures'. The celebrity ghost hunter tentatively opened the box in the episode which aired in July 2020. Zak described the moment as "profound", although perhaps a little anticlimactic. Zak simply swung the two doors open with no obvious consequence initially.
Zak felt the same way. In his voiceover he said, "when I open the doors I'm expecting something to attack me right away." He likens his expectations to the famous face melting scene in the movie 'Raiders of the Lost Ark', but he says "instead I'm feeling a strong psychological shift. Something is putting images and thoughts in my head that aren't my own."
Tags:
televisionzak bagansghost adventuresparanormaldybbuk boxtopical