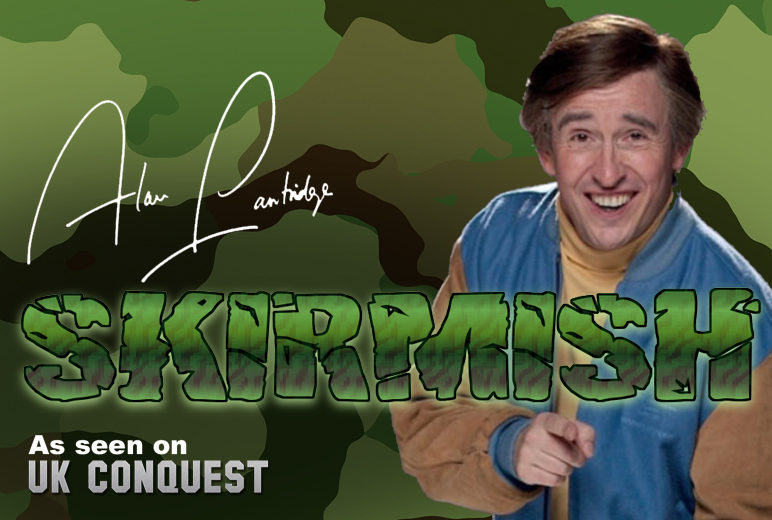 'Skirmish' is the military-based general knowledge quiz show presented by Alan Partridge, as seen on daytime digital cable television channel, UK Conquest.
The show boasts the largest audience share of any digital channel at that time of day, in the Norfolk area. On average, 'Skirmish' gets a whooping 8,000 viewers. To put that in perspective, that's eleven times the population of Hemsby.
If you've ever dreamt of taking part in Alan's famous game show, then here's your chance to play online. So, if you've swatted up on your military history and you're feeling confident, then Alan has ten tricky questions to test your militaria knowledge... let battle commence!

1. The underground lair of which evil genius was situated in the Tora Bora mountains?

2. Oooh scary Irish men, I like your berets. They're worn by Frank Spencer, the French and which dictator?

3. I'm in favour of the death penalty for treason and murder, but which of these isn't a capital crime under the United States military criminal justice system?

4. Which side did Cromwell join when the Civil War broke out? Oliver Cromwell I mean, I know there's more that one Cromwell! There's dozens of Cromwells, just look in the phonebook! I've got a friend called Cromwell.

…actually he's called Cresswell. Meant to call him back.

5. Which army barracks would you find in the outskirts of Chester? Near North Wales, off the M56?

6. "God gave the saviour to the German people," that's what Nazi war criminals say, but which one?

7. Which small airport in Somerset was constructed in 1915 as the Westland Aircraft Works under orders by the War Department? It would have been a good place to hold a millennium barn dance hosted by Jet from Gladiators.

8. The boys are back in the barracks, but where are the barracks which are the home of the Royal Dragoon Guards?

9. I met Tony Robinson once at Ten Years of Time Team. Lovely fellow, although I don't like his politics. On the show, he'd recently dug up the remains of which plane that was the first of its kind to be shot down during the Battle of Britain?

10. I've been working like a Japanese prisoner of war. But a happy one. But who was the leader of Japan during WWII?