Coming to Canadian network T+E this Halloween, 'Haunted Gold Rush' featuring never-before-seen photos and video evidence of suspected ghosts caught on camera, told through the lens of an all-female team of paranormal investigators. 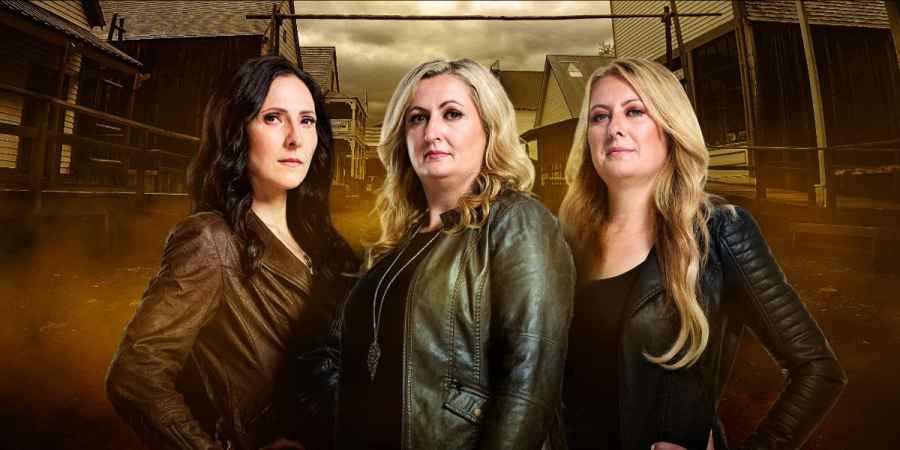 Photo: © T+E
The two-part documentary premieres on Sunday, October 30 at 9pm ET/PT during T+E's "Halloweekend" programming event, which takes place between October 28-31.
'Haunted Gold Rush' explores the ghostly mysteries along British Columbia's historic Gold Rush Trail. Featuring a strong female force of paranormal investigators, Corine Carey, Leanne Sallenback and Kelly Ireland, the documentary unlocks compelling and unnerving stories of those who suffered an untimely demise on the winding trail during the 1800s.
British Columbia's Cariboo Gold Rush trail was a bustling, wild and often violent place in the 1800s. Today, the 650 km stretch of land is considered a hotspot for paranormal activity and has hundreds of stories of hauntings from more than a dozen locations. Ghost sightings along this trail are nothing new, but recently there have been numerous intense and dramatic reports.
In the two-part documentary, sisters Corine and Leanne, and their best friend Kelly, have been called in to take an unprecedented road-trip and retrace British Columbia’s historic Gold Rush Trail, solving mysteries and witness hauntings along the way. Haunted Gold Rush features never-before-seen photos and video evidence of the suspected ghosts who haunt the historic towns within the trail.
'Haunted Gold Rush' is produced by Small Army Entertainment. Sean De Vries (The Bachelor Canada) serves as an Executive Producer, Director and Writer. Stephen Sawchuk is an Executive Producer and Line Producer. Sheona McDonald is a Director and Writer. Overseen by Sam Linton, VP, Production and Development, Global Media, who serves as Executive Producer on behalf of Blue Ant Media. Blue Ant International oversees global distribution.

Corine Carey
Corine had a gift for communicating with ghosts since she was three years old, but years of being subjected to doctor’s consultations requested by her parents who were concerned about her mental state, caused her to keep quiet. But, the visitors never stopped coming... no matter how hard she tried to ignore them. Eventually Corine was left with no choice but to accept that, like it or not, she had a gift. Since accepting that truth, Corine has dedicated her life to connecting with spirits, and has traveled the globe solving paranormal mysteries and quieting voices from beyond the grave. Corine has been to some of the most haunted locations in the world.
Leanne Sallenback
Like her sister Corine, Leanna has been able to communicate with ghosts since she was a young girl. Unlike her sister, she never doubted her abilities for a second. As soon as she witnessed her first spirit, she knew it was legit. She’s been seeking out haunted locations ever since. The two sisters grew up ghost hunting together, playing “spot the spirit” as children, and have witnessed (and recorded) some truly amazing paranormal phenomena. Leanne is a fierce believer who tirelessly works to get to the bottom of what these spirits are trying to tell her.
Kelly Ireland
From the age of two, Kelly had an innate ability to connect with spirits from beyond the grave. Her first such memory is of her dog coming to visit her, long after he had been put down. Unfortunately, this ability was squashed rather than nurtured by her overprotective parents, and she soon learned to keep quiet about her visions. Once she met Leanne and Corine, Kelly learned to embrace this gift, rather than run from it. Since then, she’s joined them on countless ghost hunting missions and loved every minute of it.
Tags:
paranormaltelevisiontopicalhalloweenhalloween 2022tande