This article is more than six years old and was last updated in January 2018. 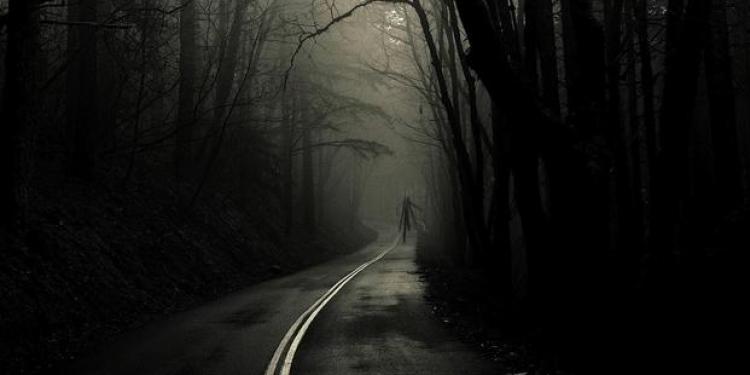 Paranormal believer Barry Dodds was going to debate the mysterious case of the Mary Celeste in this episode of the podcast, but ditched it last minute in favour of a mystery he'd found out about just one day perviously, Slender Man. But will skeptic Ray Peacock be convinced by Barry's fairy story?
Straight off Ray tell Barry that Slender Man is "absolutely cast iron proven as a made up story," he says, "Slender Man was a competition on a website to design the scariest thing you can and present it online as real."
And of course, it was. Slender Man was created in 2009 as the result of a Photoshop contest on the website Something Awful. The mythology of the character was later expanded on by website contributors who created fan fiction and additional artistic depictions of the entity.
Undeterred, Barry describes Slender Man, "he's a tall man, he wears a suit. He's got long arms, long legs. He's got tentacles on his back, sometimes, not all the time. And he's got no face." According to Barry this mysterious man "goes for kids," but he doesn't necessarily want to kill them. Instead some people think he convinces kids to kill others.
Barry tries to argue that the Slender Man is more than a myth, "there's cave painting of Slender Man," but Ray reminds him that this is all part of the character that has been created online, telling him that the cave paintings have been created retrospectively, "this is all part of it, it's a meme, it's thing that flew around the internet and then people added to the mystery themselves."
Barry does agrees that Slender Man was dreamt up as part of a competition but is under the delusion that the aim of the contest was to "draw something scary," it wasn't a drawing contest, it was a Photoshop competition. This meant that Barry assumed that the original source of the Slender Man was a drawing and to back up the fact it's actual real, he presented two photos.
It turns out, these two photos were actually the first ever images of Slender Man, not a drawing as Barry had though. The photos are well documented as being part of the competition and were created by a Something Awful user Eric Knudsen, who went by the alias Victor Surge.
Barry was forced to admit that these photos were evidence that Slender Man is real and instead described a video he's seen online as evidence.
Of course Ray points out that the video is a fake, but Barry still argues that Slender Man is real and that he's been around long before he became a meme. According to Barry he was first reported in 16th century where he was known as Der Großmann. Ray snaps him back to reality, "no he wasn't, all these things that you have found are all people contributing to the original idea."
Barry argues, "no, the German one per-dates this," but Ray points out that these stories don't pre-date the documented origin of Slender Man, "you've been told it per-dates this." In fact the story of Der Großmann was first posted on line in 2011, two years after Slender Man was created.
Then Barry plays his ace card, "Slender Man is a tulpa." Explaining what a tulpa is, Barry says "a fictional thing, if enough people believe in it then it becomes real." A Tulpa is basically a being or object which is said to be created or manifested physically through spiritual or mental powers. The most common example amongst those who practice the technique is the ability will an imaginary friend into being.
Based on this, Barry asks "is it possible then because of this huge belief system that people have created him?" Ray says, "Slender Man hasn't come alive because they all believe in it."

The debate is settled pretty quickly after this when Ray asked Barry three simple questions, "is Voldemort real?" To which Barry says "no". "Is Donatello from the Teenaged Mutant Ninja Turtle real?" Again, Barry answers "no". And finally Ray asks, "is Slender Man real?" Barry thinks for a few seconds and then responds, "no," to which Ray cheerily says "case closed."
Ray 4 - Barry 0.

More From The Parapod View All