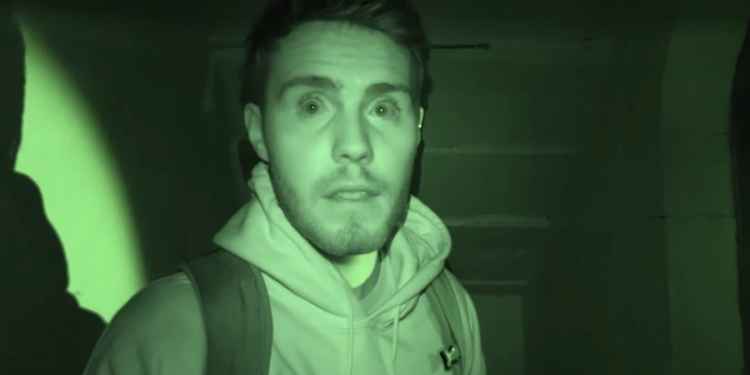 Photo: youtube.com
British vlogger Alfie Deyes has embarked on a tour of some of Britain's most haunted former prisons for his YouTube channel Pointless Blog.
24-year-old Alfie says he's always been interested in crime and after stumbling across a website, which offered tours of haunted prisons, he set off to make his first ever documentary series. Alfie's first foray into ghost hunting is spread across three videos, all of which are available on his channel now.
Before heading off to his first prison, the vlogger said "I don't believe in paranormal, I don't believe in ghosts, I don't believe in spirits," but he did confess "I do get incredibly scared in the dark." Despite not being a believer, Alfie said, "I've never ever seen someone use a Ouija board and had a good outcome." So, it seems he could be convinced if the spirits show themselves in one of the three haunted prisons he's investigating with his girlfriend Zoe Sugg, known on YouTube as Zoella and Mark Ferris of TheBifflovesyou fame.
Zoe admitted that she's an open minded skeptic, she said "I really want to believe it," while Mark thought there was a very good chance they could experience some paranormal activity in the prison, but despite this, Zoe assured Alfie that she wouldn't get scared during their investigation.
So, armed with a night vision camera and an array of ghost hunting gadgets, they head off for their first night behind bars. Their first stop was Shepton Mallet prison, a grade II listed building, also known as Cornhill. It was the oldest operating prison in the UK when it closed in 2013. At this time it was home to almost 200 inmates serving the final years of their life sentences.
In the second part of the series, Zoe and Mark were replaced by Sean Elliott O'Connor (seanelliottoc), Steve Booker and Tom Cassell (SyndicateCentral). The gang spent the night in HM Prison Gloucester. The former jail opened in 1791 to house some of the UK's most notorious criminals. In the prison's early days over 100 executions were carried out, the prisoners' bodies were buried within the grounds, to this day not all have been found.
The final night of their adventure, Alfie was joined by Mikey Pearce and Caspar Lee at HMP Shrewsbury, where there's been a prison since 1793, however the building as it currently stands was built in 1877. The prison has seen thousands of prisoners come and go over the years, including women up until 1922. The prison walls have witnessed many deaths over the years, including, murders, and inmates taking their own lives, so many suicides in fact that an enquiry was opened after three inmates hanged themselves over a period of just two weeks.

Dating back to 1625, the prison has a pretty grim past. Originally men, women and children were packed into Shepton Mallet together, apparently in dreadful conditions. The cells held debtors, thieves, vagrants and people with mental health disorders. Poor amenities and primitive sanitation led to frequent outbreaks of ulcers, jaundice, asthma and venereal diseases.
Over the years their were plenty of deaths in this formidable prison, including murders, suicide, accidents and judicial executions. The total number of hangings at the prison is unknown, but some of the documented execution include a local man who battered a 10-year-old girl to death, a man who drowned his wife in the River Avon, and a man who cut his 37-year-old girlfriend's throat.
The body's of executed criminals weren't allowed to be buried in consecrated ground, so they were laid to rest in unmarked graves within the walls of the prison.
With almost 400 years of detaining murderers, violent criminals and notorious gangsters, plus a history of brutal executions, cruel punishments, suicides, and countless dead in unmarked graves within the prison walls, it's no wonder HMP Shepton Mallet is said to be the most haunted prison in the country.
The areas of the prison which are said to be the most active are the prison's eerie kitchens, the general's office, and the exercise yard, which is reportedly haunted by a former inmate, Captain Philip William Ryal, who climbed onto the roof of the prison and took his own life in 1914. Ever since his final words, "get back," have been heard echoing around the yard by inmates.
A cell in A Wing is reportedly haunted by a former inmate who was murdered here, while in B Wing visitors report the most negative energy in the whole of the three-acre site.
C Wing has a regular spook too in the former of a 'white lady', it's said she was wrongly convicted of murdering her fiancé, and sentenced to death in the 17th century. She's seen wearing her wedding dress, which she apparently wore in the condemned cell the night before her execution.
The prison is also said to be haunted by spirit of an American serviceman. He's been seen walking through walls in the prison in his uniform. He's thought to have been killed in the yard by a stray bullet from American army firing squad while overseeing an execution.

The prison closed four years ago and is now open to public. Many visitors claim the prison is haunted by a woman called Jenny, it's said she was murdered in the 15th century on the land where the prison was later built. Now her spirit roams that land in search of her killer, he ghosts has been seen by bother prisoners and guards.
In 1969 a group of inmates conducted a seance in cell 25 of A Wing in an attempt to contact the ghost of Jenny and got more than they bargained for when books and even a flowerpot were thrown around the cell by a supernatural force.
This wasn't the last the inmates saw Jenny, just a few days later her disembodied hand appeared to the convict inhabiting cell 25, it pointed directly at him before vanishing as suddenly as it appeared, earning cell 25 the reputation of being haunted part of the 200 year old building.
Staff and prisoners have reported hearing knocks and bangs throughout the prison's buildings, as well and slamming doors and shadowy figures which have mostly been sighted in C Wing, a newer part of the prison that was built in the 1970s.

The prison's A-wing is said to be the most haunted, perhaps due to its dark history of suicides resulting in sad, angry souls being trapped between this world and the next. Most of those who took their own live did so on A-wing, at one point there was one a week.
Plenty of judicial execution were also carried out at the prison. In 1885 five prisoners were hanged in a single day. The hanging room was used until 1961, and was then converted into a group session room. This is said to be a very active area, possibly due to its location next to the condemned cell and with the mortuary is underneath it.
When the prison was in operation, some officers refused to work in C Wing alone at night, they've reported being pushed down stairs, hearing doors slamming, noises like moving all around them, and footsteps. It's said the atmosphere can change in the blink of an eye.
It is believed that one of the female prisoners has refused to leave, she has been seen dressed in a grey uniform many times walking the upper levels. She walks from cell 3 toward the execution room.

Did Alfie & The Team Track Down Any Ghosts? 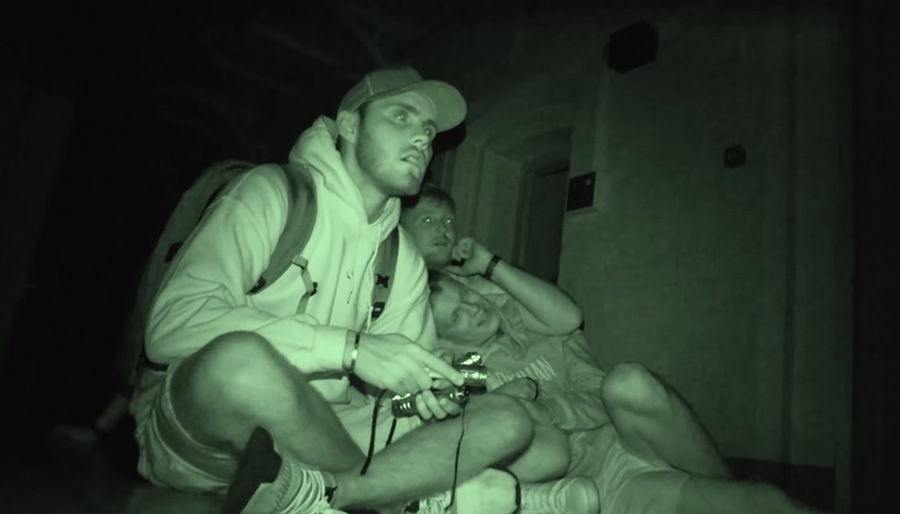 Photo: youtube.com
Shepton Mallet failed to fully convince the team of the paranormal, although they did experience some odd noises and Zoe said that she "felt an energy" when she walked into certain rooms and at one point reported the sensation like someone was pulling her hair. They also all reported feeling breathless in one room, which used to be part of a kitchen. Apparently this feeling of breathlessness is commonly reported here. Was the team's experience paranormal or a psychological response to the story they had been told? After leaving, Alfie confessed that he wasn't scared, but said "the only way I can describe it is, I don't like it."
On night two, things were quiet, although Tom felt like something touched his leg in a cell at Gloucester Prison, he said after "that leg freak out really messed with me". They also caught lots of orbs on camera, a strange clicking sound and towards the end of their investigation they thought they could see a figure at the end of the hallway, although this was probably just the darkness playing tricks on them. Night two was so quiet in fact that Alfie was starting to doubt the existence of the paranormal even more. In a cab on the way to the third location he said, "the first night, I found genuinely scary, made me a little bit believe there might be something. After last night, I feel less confident."
The third and final night at Shrewsbury gave the lads a few scares. Several times they reported hearing footsteps, and in a visitors' creche, a child's toy made a noise despite the fact that no one was near it at the time. Caspar said he checked all of the toys afterwards and said they were all turned off and didn't have batteries. Towards the end of the investigation a cell door slammed in the distance, but it could have been Mikey behind it, who had previously left the investigation after calling it a night.
I've seen bits and pieces of Alfie's video before and am aware of his work, but it's the first time I've ever sat and watched any of his content in depth. The three parts add up to a total of two and a half hours of paranormal entertainment and it was an enjoyable watch.
It's nice to see a YouTuber who isn't specifically known as having an interest in the paranormal having a got at ghost hunting, and even though it would have been easy to play up to the camera, they took it all pretty seriously and conducted a reasonably sensible investigation of the locations... apart from the third part where things did start to get a little "hectic," to quote Alfie.
The series was made all the more enjoyable by the fact that I've also been on ghost hunts in two of the three prisons they visited. You can find out more about my time at Shepton Mallet and Gloucester prisons on my ghost hunting pages.
The third part ends with a promise that part four is on its way. So, it looks like this isn't the last we've seen of Alfie and friends getting scared in the dark.
Tags:
paranormalyoutubetopical