Most Haunted At The Galleries Of Justice - Series 16, Episode 4 Review

This article is more than seven years old and was last updated in September 2019. 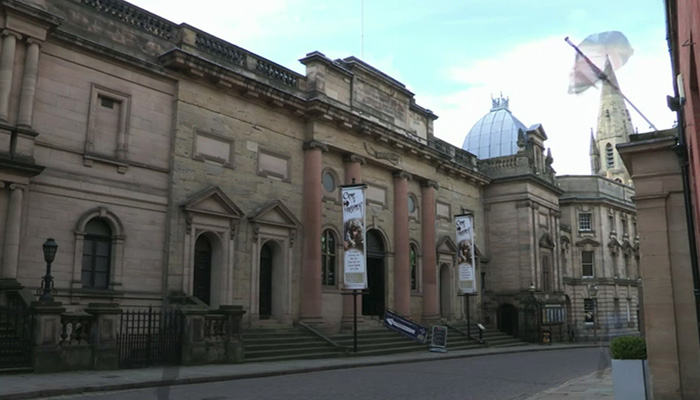 Yvette Fielding and the team first visited this historic building in the heart of Nottingham during the show's third series back in 2003.
The galleries which are built within Nottingham town hall, have been open to the public as a museum since 1995, but the history of the site dates back to 600AD when it was the site of Nottingham's original Saxon settlement.
Although its early history is vague, the building has been linked with punishment and incarceration from the Saxon times onwards. Written records confirm that the the hall was used as a court from 1375, and a prison from 1449.
The building was rebuilt between 1769 and 1772, this is commemorated with a large chiselled stone plaque which adorns the front of the building and reads, "this county hall was erected in the year of MDCCLXX and in the tenth year of the reign of his Majesty George the III."
Due to the appalling conditions, the jails was closed in 1878, but the courts were used right up until 1991.

Are The Galleries Of Justice Haunted? 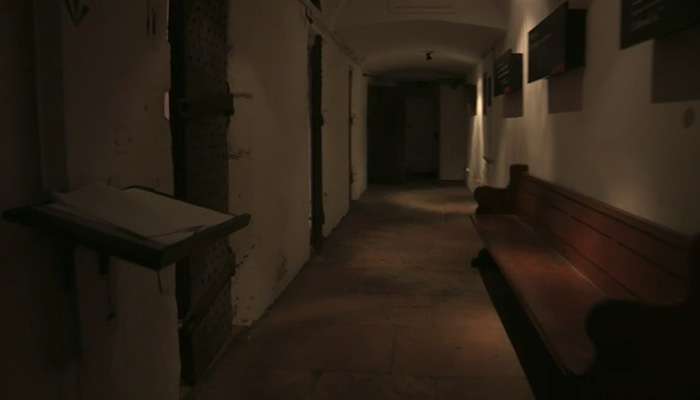 With such a history and so much hardship and countless deaths, no wonder the Galleries of Justice is said to be so haunted. It's resident spooks include the ghost of a soldier, a Victorian gentleman wearing fine clothes, and an old lady.
The courtroom is said to be the most paranormally active part of the building. Many have witnessed moans, groans and whines of desperation here.
Below the courts are the dark, oppressive tunnels and cells of the sheriff's dungeon. In this part of the building many have reported seeing dark shadowy figures.
In the bath house, Yvette caught up with the show's demonologist Fred Batt, who warns Yvette that, "this is a terrible place you know."
He then told Yvette the grim history of this part of the old prison, "here is where they used to hold the women. They'd bring them down from the court and the men jailers would strip them off, throw them in this bath..." but his story was interrupted when a wooden brush was thrown. 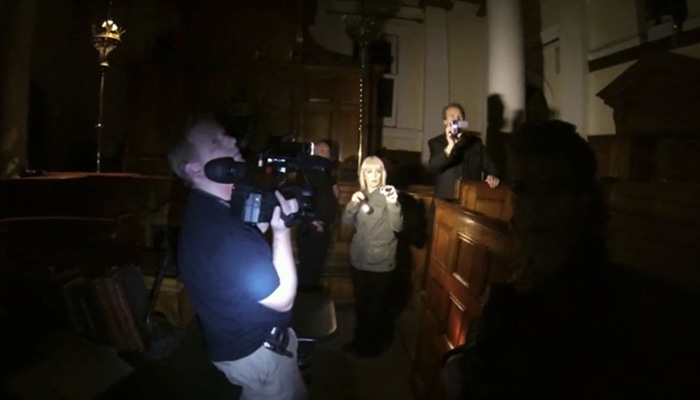 With the lights out, the team started their investigation in the courtroom. Yvette was joined by Fred, Karl Beattie, Stuart Torevell, Chris Burton and, as Mel Crump was unavailable for this episode, her sister Kim Crump stood in.
Straight away they heard knocks and bangs. Yvette called out to the spirits, encouraging them to communicating by knocking or banging. Suddenly the old judge's chair that she was stood next to let out a huge bang causing the host to jump, swear and run away.
Once she'd calmed down Yvette described the incident as feeling as if someone had stamped their foot right next to her. Yvette then returned to the chair to try again but were unable to get a similar response.
Instead they acted upon their belief that whatever occupied the building was trying to draw them down into the cells, via a narrow staircase in the courtroom, so the team went to investigate. 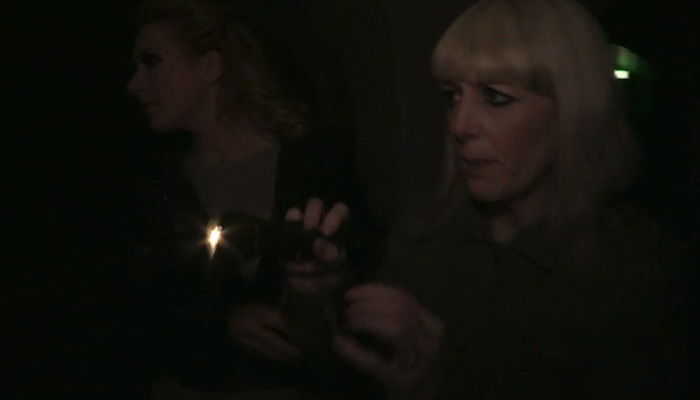 As soon they entered the eerie dark passageways, Yvette confessed to feeling a little jumpy and seconds later she jumped out of her skin. Yvette and Kim both let out a scream when they heard a loud banging, which seemed to come from a large iron gate in the dungeon.
Moments later they heard a disembodied whistling sounds. New girl Kim was clearly terrified, Yvette asked her on a scale of one to ten how scared she was, and she admitted it was eight.
The team then split up, leaving Yvette, Kim and Chris alone in the cells. Yvette said "I'm feeling really really nervous. You'd think after all these years of doing ghost investigations, I'd be as cool as a cucumber but I'm not, the slightest movement and I'm jumping."
As the gang continued to walk through the darkness they had the fright of their life when as disturbing, high pitched whining noises was heard. This turned out just to be the iron gate creaking as they past it, but it certainly got their hearts racing. 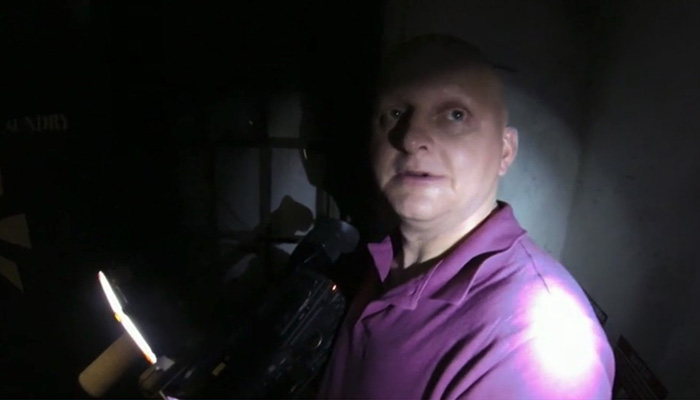 Meanwhile, Karl, Fred, Stuart where in the bath house. Upon entering, Stuart said, "I feel like I have just run around the block, because I am out of breath." Karl reported feeling the same sensation. Their conversation was interrupted when Fred thought he'd seen a shadow moving in the darkness and the team went to investigate, only to find no one there.
Seconds later a candle was seemingly thrown across the darkened underground room. Although the incident wasn't captured on camera, Stuart saw the movement out of the corner of his eye. Again something was thrown in a room behind them. The doorway to the room was in shot at the time and there was no one inside who could have thrown anything. After a search of the room they found it was the same wooden brush, which had been thrown earlier in the day.
Next, it was a cheese grater that was thrown across the room. Then hearing the commotion from the other team, they rejoined Yvette and co to see what was going on. Now reunited the gate was causing more trouble when it was slammed shut while they had their back to it. 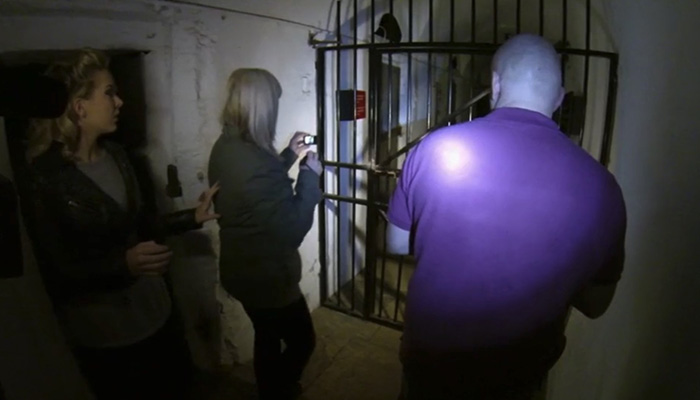 The team split up again and returned to the areas they were investigating. Karl and his team experienced plenty more knocks, bangs and objects being thrown. Meanwhile, Yvette and her team heard a bottle landing on the stone floor in the darkness, having been thrown somewhere near them.
Yvette, Kim and Chris then went to investigate the condemned cell and called out to the spirits, although this proved unresponsive. When they returned to the corridor, they once again hear the gate squeaking on its own in the distance. Then suddenly, the camera battery died and Yvette and her team were forced to end their vigil for now.
Back in the bath house, Stuart and Fred were get excited after seeing a door close on its own and capturing the event on camera. Stuart said the door was closing "very slowly, as if someone had control over the door." In the replay, the door did gently swing closed, until the last couple of inches, when it suddenly slammed closed. 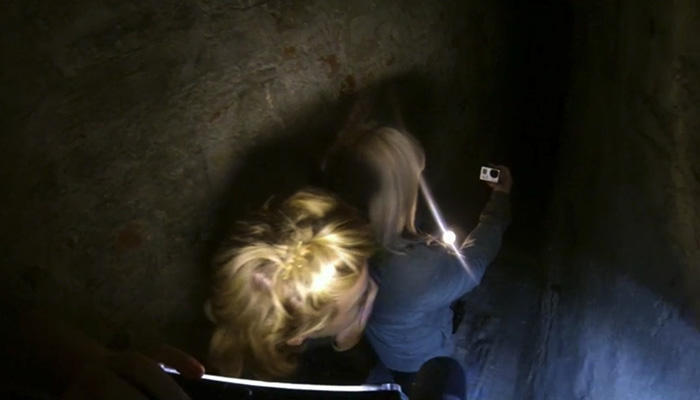 The team then moved on to an ominous sounding part of the building, the debtor's prison and dark cells, where more frights were in store. Yvette and Kim started by walking down a narrow, creepy passageway, followed by the camera men. But they didn't get very far before they heard the sound of something metal being thrown.
Next they were haunted by a foul smelling odour, which Yvette said smelt like rotting flesh. Kim said it was "the sickest smell I've ever smelt in my life." Now breathing through their mouths to try to avoid the smell, the continued in to the dark passageway while holding their noses.
The next scare was for Karl, he suddenly spun around with his camera, having heard what he described as being like a growl. Moments later another metal object seemed to have bene thrown, and a door that was previously open had closed on its own. 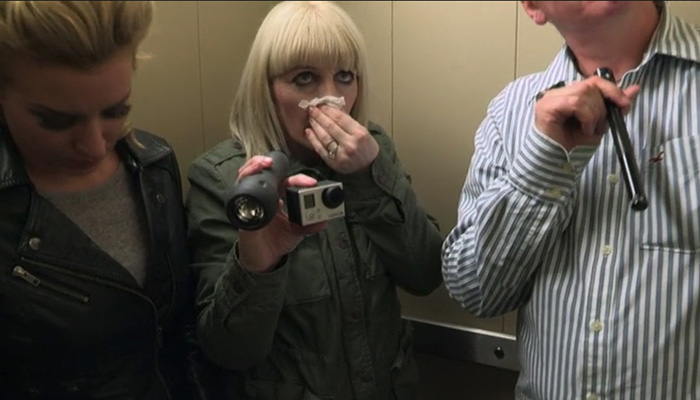 The rest of the crew weren't very impressed when Yvette said to the spirits, "will you stop the lift and stop it for a long time so we can't get out." Karl said, "it stinks in here, are. you out of your bloody mind?"
Yvette then started asking the spirits questions, taking knocks from around them in the lift as answers. Yvette seemed to get her wish, the lift did indeed get stuck, Karl even mentioned pressing the alarm button. Pushing her luck, Yvette then said "can you make the lights go off? That would be so cool."
Luckily this time, she didn't get what she asked for and moments later the doors opened, leaving Yvette to conclude, "now come on, that was impressive stuff! How cool was that?" Now safely back in the crew room, the investigation came to an end.
Summing up, Yvette said, "no one could have ever imagined such a strange turn of events. An old spirit using a new piece of technology to communicate with us, a lift. This incident witnessed by four people, all accounted for, stands as one of the best pieced of evidence I have ever encountered."
For reviews of all of the new episodes, plus highlights and evidence from the shows, and to find out when Most Haunted is on next, visit the Most Haunted episode guide.