With 80mph winds blowing outside, I joined the Most Haunted Experience and their guests as we went on the hunt for spooks at Chatham's historic docks. The event gave fans of Most Haunted the chance to embark on a paranormal investigation with the stars of the long-running television show. We were joined by Karl Beattie, Stuart Torevell, demonologist Fred Batt.
The wind was so fierce outside that the historic ropery building, where we focussed our investigation, was literally straining under the beating it was getting. Although atmospheric, it's not the best conditions for a ghost hunt as the chances of external noice contamination was high. 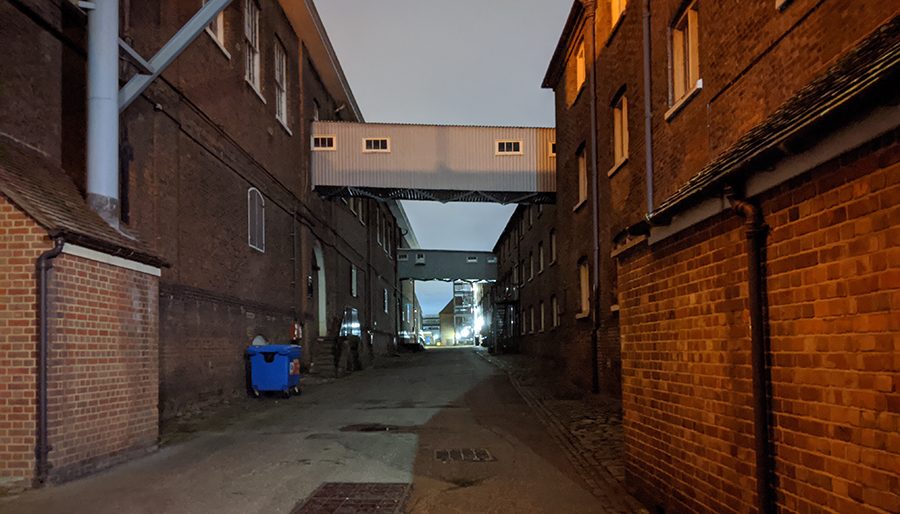 The ropery, which ceased operation in 1984, sits within the docks, which were one of Britain's most important dockyards for 400 years. Royal Naval ships have been built and repaired here as far back as the reign of Henry VIII, including HMS Victory, Nelson's famous flagship at the Battle of Trafalgar.
Like most allegedly haunted places, the docks have a dark past. In 1667 the Dutch attacked the harbour, destroying numerous ships and commandeered the Navy's flagship, the HMS Royal Charles.
There are several buildings on the docks that are said to be haunted, including the Commissioner's House, where there has been countless sightings of apparitions, including the ghost of a former commissioner. There's also believed to be the spirit of a woman named Mary. She's said to have taken her own life by hanging herself from the back stairs in this building.
Elsewhere in a loft, where flags and sails were once made for ships, many workers reported seeing a woman wearing a long flowing dress accompanied by the strong smell of lavender. They also reported being touched on the shoulder whilst they were working.
We spent our night in a building called the ropery, which is said to be haunted by a drummer boy who was apparently murdered and decapitated there, ever since people claim to have seen his headless ghost. 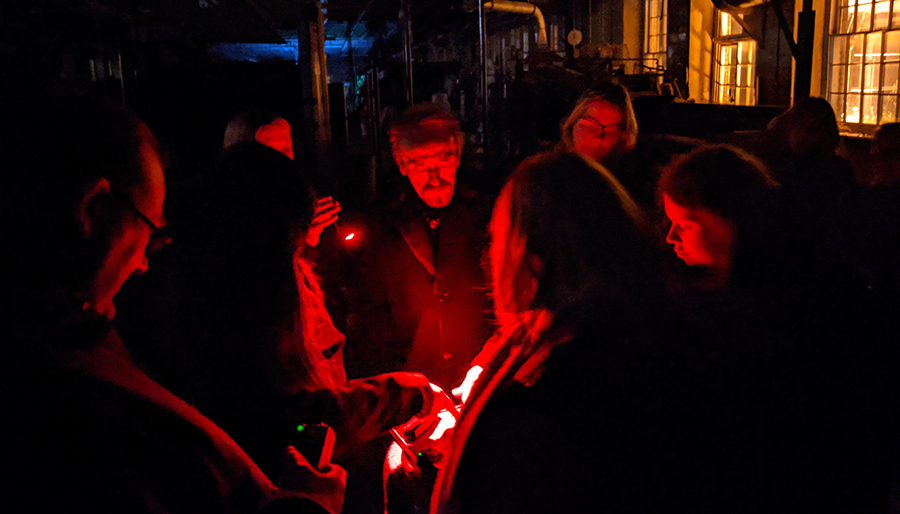 There were quite a lot of guests at the event, but that wasn't a problem because of the size of the ropery. We were split into three teams and taken to a long, thin rope factory on the first floor of the building. The room was in total darkness, other than a glow from the street lights outside coming through the windows that lined both sides of the building.
The vigil started as you'd expect, MHE's Sandra and Mark attempted to call out to any spirits and encourage them to interact with us. It was a fairly quiet start, but just as we were about to begin a Ouija board session Fred arrived. On these sort of events you never really know which members of the team will join you and when, but it was good to get the chance to investigate with a demonologist.
The thing Fred loves to do at events most of all is communicate with spirits using a Ouija board, so his timing was perfect. He asked for a few volunteers to place their fingers on the planchette with him and he began by opening the board with one of his famous incantations, "in nomine patris et filii et spiritus sancti."
Fred wasn't attempting to call up anything evil, in fact this is a positive incantation and is used for protection. The old Latin translates as "in the name of the Father and of the Son, and the holy spirit." After that Fred started calling out and pretty quickly the board came to life and the planchette started whizzing around its surface.
The boards was surrounded by four K-II meters, these devices detect changes in the ambient electromagnetic field and indicate this by lighting an array of coloured LEDs. As the planchette spelt out its responses by sliding across the board, the meters occasionally flashed and lit up. This can be caused by mobile phones and electrical devices. However, since there were no electronics nearby and everyone's phones were in flight mode, it makes it hard to explain why the devices triggered.
The skeptic in me wondered if it could have been Fred's heavy metal ring triggering the devices as I know that magnets can set them off, but looking closely at the movement of the planchette across the board showed absolutely no correlation between the reading on the meter and the position of any of the participants' hands.
Fred pretty soon encouraged the guests with him to call out, rather than hogging the board himself. After asking the spirit its name, the board spelt out "Jane Hercule" - which is an odd mix of two Agatha Christie detectives, Jane (Miss) Marple and Hercule Poirot. Jane indicated through the board that she was French, died in 1858 at the age of 39, and came to the UK on a ship called the Mayfly. According to census records, there were about 21 families with the name Hercule living in the UK between 1840 and 1920 - no further details are publicly available on anyone called Jane Hercule.
It was a very active and responsive Ouija board session, one of the best I'd seen in terms of the quality of answers. 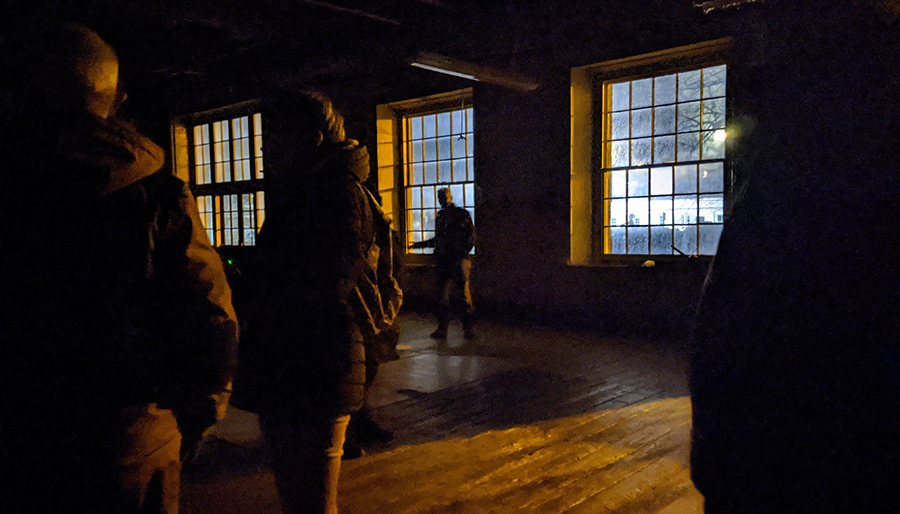 Eventually Fred left us to spend some time with the other two groups, but before long Karl and Stuart came to join us while we were at the other end of the room. This part of the ropery had less machinery giving us a large open area to investigate. Several of the guests called out with Karl asking any spirits present to make their presence known by knocking.
Before long some loud knocks were heard that seemed to move between several of the guests. Then Stuart started calling out and weirdly, every time he spoke knocking sounds could be faintly heard, but when he stopped so we could listen the rapping stopped. This continued for at least 10 minutes. It was impossible to pinpoint exactly where in the room the sound was coming from, but sounded like it was coming from the wooden floor.
With that, our time in this part of the building was up and we braved the wind outside to head back to the base room for a complimentary hot drink and a snack - I opted for a Tunnock's Teacake this time. 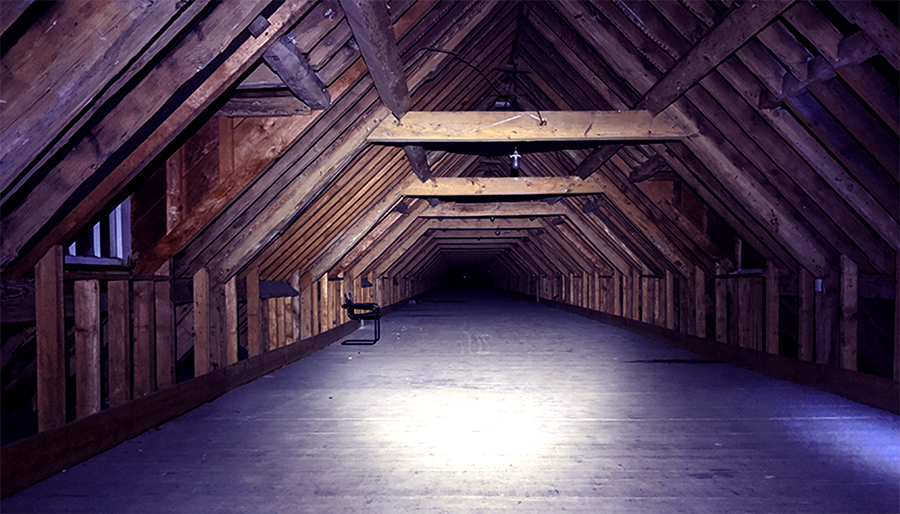 Putting the celebrity hosts aside, the good thing about doing public events like these, is that you get to investigate with a variety of other people, all of whom have different approaches, beliefs and energies. But by far the best thing about these sort of events is the access you get to some really interesting places, and the ropery was no different.
After the break we headed up to the attic, a room the likes of which I'd never seen before. The room, that fills the eaves of the building, is not much wider than the average living room and only a little higher at its central peak, but it's a staggering quarter of a mile long, completely empty and uninterrupted. It's without a doubt the longest and narrowest room I've ever been in.
Fred joined us in this room and we conducted another Ouija board session on a small fold-up table in the middle of the attic. The responses that came through were similar to the first, could this mean the spirit had followed us through the building? 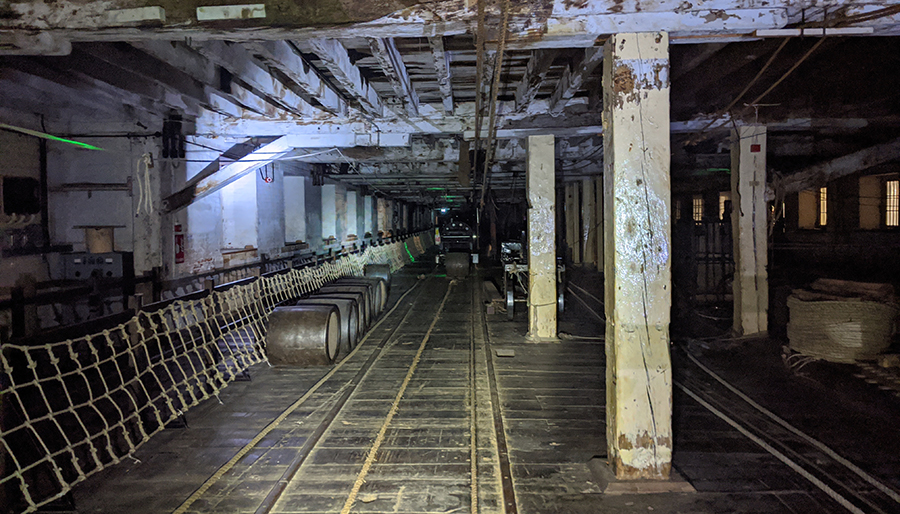 For the final vigil of the night, we investigated the ground floor of the ropery. The session was quite active in terms of knocks and bangs, some of which were false alarms caused by windows rattling in the wind, others remain unexplained.
We were also getting quite a lot of activity on the four K-II meters that were laid out on the wooden floor and again there was no obvious cause. This gave me and one of the MHE team, Mike, the excuse to get a little bit geeky with our ghost hunting gadgets.
We pulled out our TriField meters, which are like executive versions of a K-II meter. They monitor magnetic fields, electrical fields, radio waves and microwaves, and display the results in much more detail than a K-II does.
Because we had two TriField meters between us, we were able to set one to detect electrical fields and the other to detect manmade waves such as radio waves and microwaves. With the devices set up this way we were able to isolate what type of electromagnetic energy was actually triggering the K-II meters.
We found that it was energy in the radio wave end of the spectrum that was triggering the device. The strength of this energy was very low and seemed as if it was very localised. Although we know what sort of energy this was, the cause and source of it remains unexplained. Of course I can't rule out for sure that it wasn't the result of some kind of transmission equipment nearby.

The ropery was the most industrial building I've ever investigated and probably one of my favourite locations I've investigated, the scale of the building was very impressive and very unique. Luckily the wind didn't affect us too much, other than a few rattling windows that were easily debunked. To get the chance to wander around it all night is quite a treat, but sadly there was no free time to explore alone on this event because of the size of the building.
Although we didn't see the headless ghost of the drummer boy, it was a pretty active evening. The highlight of the night was getting the opportunity to see Fred in action on the Ouija board as I've never investigated with a demonologist before. Fred had a real passion for and genuine interest in Ouija boards.
Events with MHE aren't so regular in the South of England, especially celebrity ones, but if you want to attend an event with the stars of Most Haunted, then I'd recommend keeping an eye out for more events at this location.
If you'd like to book your own ghost hunt with Most Haunted Experience, you can find more information at mosthauntedexperience.com.
Tags:
paranormaltopicalessexghost huntsmost haunted experience