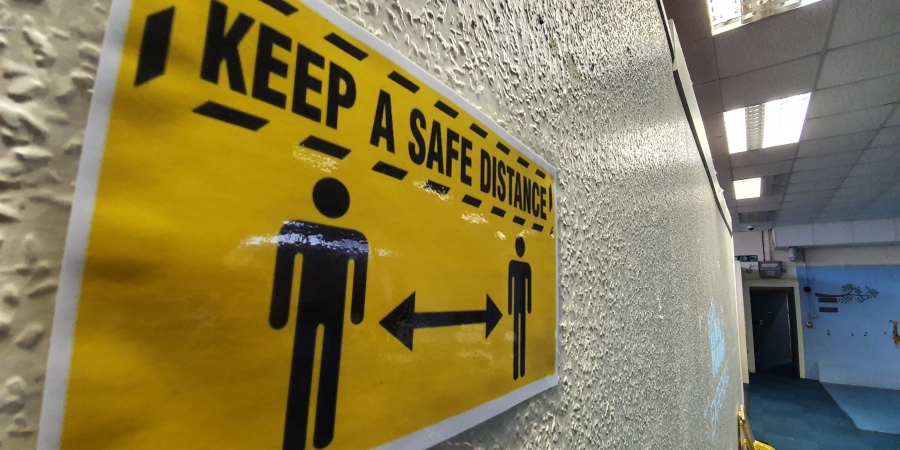 Like everyone else, my regular Saturday night ghost hunts have been on hold for the last few months due to the global coronavirus pandemic, but at the weekend I attended my first public paranormal event, but what is chasing spooks like in the "new normal?"
How can an events company that is used to having large groups of people in attendance ensure that their team and guests are kept safe, that social distancing is maintained and that the night is still enjoyable?
I made my return to ghost hunting at an event in a vast former prison in Shrewsbury hosted by Most Haunted Experience (MHE). Of course, things were a little different to normal, but surprisingly it didn't detract from the enjoyment of the night at all.
The first thing I noticed after being greeted by MHE's team upon arrive at HMP Shrewsbury, which closed in 2013, was that there were a lot fewer guests than you'd normally expect to find at an event in a location of this size, there were around 30 of us in total. It's common practice to be split into two or three groups at an event like this, but the first big change was how the groups were permitted to interact with each other.
A large room which was once where prisoners went to see visiting family was the base room for the event. Chairs had been laid out according to group sizes and areas on the floor had been marked out to separate guests into two teams of around 15 people. No one from either team were allowed to enter the other team's side of the room. At no point in the night could the teams mingle, which reduces the risk of contact. For added safety, both teams had separate toilets and facilities for snacks and drinks.
Within the two teams guests were ask to maintain a distance of two meters where possible and we were only allowed to mix in the groups we arrived in. Of course you need to refer up to the government's guidelines on this. In England you can socialise indoors with one other household, but must still abide by the two meter distance rule. Of course close contact with others in your household is fine on an event, and if you live alone you are able to form a support bubble with one other household and can attend an event as a bubble without the need for further social distancing.
One important part of the government's advice to remember is that you shouldn't interact socially with anyone outside the group you are attending a place with, even if you see other people you know. So although you might see friends you know at an event, you should maintain a safe distance.
This meant that only members of the same household or social bubble can take part in certain experiments together, things like Ouija boards and table tipping that require participants to be close together. It also meant that other staple ghost hunting activities like holding hands with strangers in a circle were strictly off the table.
It turns out that social distancing in a prison is pretty easy. Not only was the base room very spacious, there was also plenty of room in all of the areas where vigils were carried out. Plus the hundreds of empty prison cells meant that household groups could safely break away into their own enclosed area to conducted paranormal experiments. 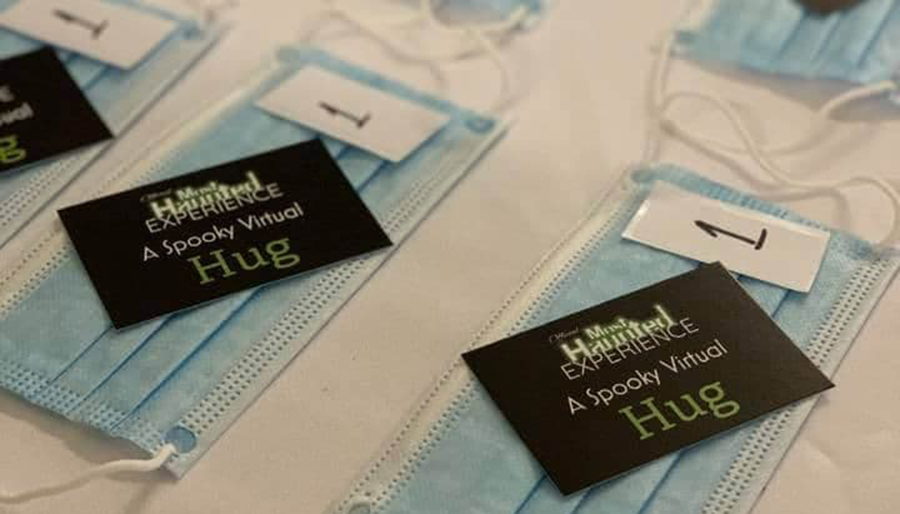 As of Saturday August 8, people in England were "strongly encouraged to wear face coverings" in any indoor location where there are people they do not normally meet. Since this event took place on the night of August 7, this technically wasn't a mandatory requirement until midnight, at which time MHE's team requested that all guests wore a mask. Something that all attendees were happy to do.
I have to admit, it was uncomfortable wearing a mask on what was one of the hottest nights of the year, but we all have to do our bit to get through this situation, so really it's a small price to pay for the chance to go ghost hunting again.
Of course, it's really down to MHE's guests to stick to these rules, but it's fair to say that the team were seen to be doing all that they could to encourage social distancing and safe practices, from issuing each guest with a face mask upon arrival, to logging which guests handled ghost hunting equipment like EMF meters for COVID-19 tracing purposes.
The gadgets were also sanitised between use, and there was plenty of hand sanitiser available, not just in the base room, but around the building too, which is handy as it's inevitable that you'll end up touching shared surfaces like doors and the hand rails on stairs.
Other precautions that MHE had taken to ensure the event was run safely included regular cleaning of the toilets, and issuing each guest with a brown paper bag containing disposable cups, tea bags, and coffee, sugar and milk sachets. This meant guests weren't sharing these items are it eliminated queues and gathering around hot drink stations.
There was also plenty of signs and information provided by MHE, which they are using at all locations where post-lockdown events are running.
Like many of MHE's events, two of the stars of the long-running ghost hunting series 'Most Haunted' were in attendance. Karl Beattie and Stuart Torevell spend most weekends meeting fans at these sort of events, but even for them things have changed. No longer can they greet fans with a hug or a hand shake. Instead meet and greet opportunities consist of a socially distanced photo opportunity with the celebrity ghost hunters. 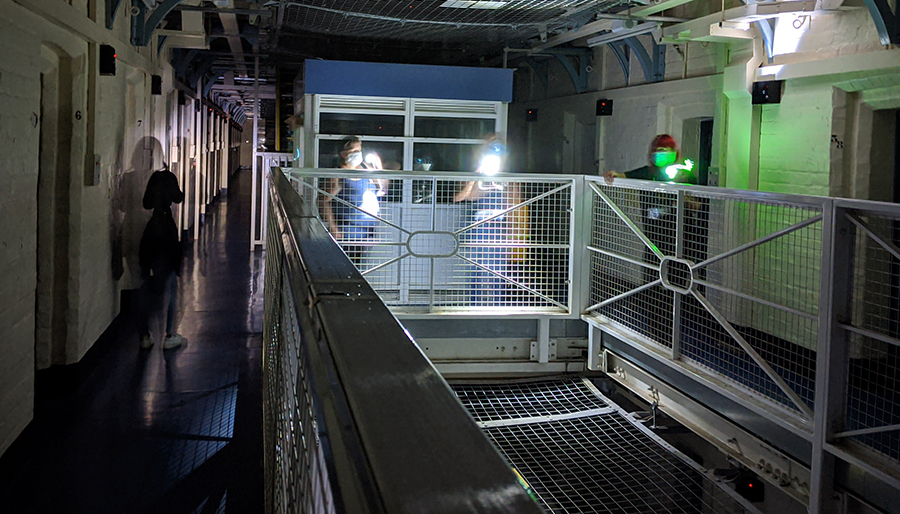 As for the paranormal investigation itself, things weren't too different, apart from we were a little more spread out, but with only 15 people in a team this didn't really matter in any way. We spent time in various parts of the prison, starting out in the C Wing, where prison officers have reported being pushed down stairs, hearing doors slamming, and disembodied footsteps.
C Wing proved to be a little quiet, as is often the case on a ghost hunt, but things got a little more interesting later in the old hanging room, which is situated in what are now that back offices in what was once B Wing. While in the hanging room, that was used until 1961, we heard a series of very clear but totally unexplained knocks, which at times seemed to be responsive and answer our questions providing one knock for 'yes' and two for 'no'.
After a quick break back at the base room where I had a Tunnock's Milk Chocolate Caramel Wafer to keep me going, we headed back out to into the prison. This time to A Wing and we were all wearing our face covering as the clock was edging closer to midnight and the rule change. This part of the prison that is said to be the most haunted, perhaps due to its dark history of suicides resulting in sad, angry souls being trapped between this world and the next. 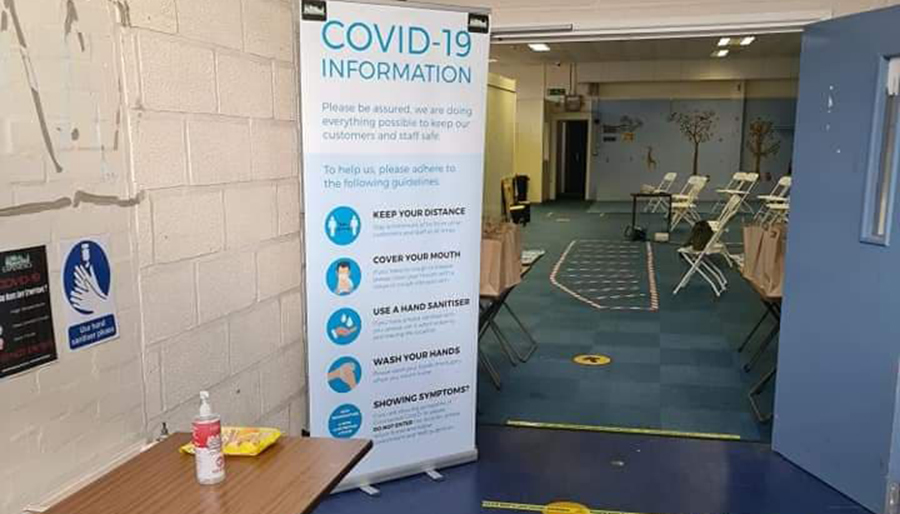 Jenny Bryant, MHE's events manager told me, "I'm very proud of how we run our post lockdown events. Putting the guests and teams safety first without taking away the enjoyment that our guests have become accustomed to. The COVID measures are essential to hopefully at some point return to some sort or normality. We all have to do our bit and paranormal event companies are no exception... we are all in this together and thank all our guests for their love and support throughout these strange times."
Not all of MHE's events are up and running again. Many will not resume for a while longer, especially those held in smaller locations where social distancing is not possible. However, HMP Shrewsbury, which is operated by Jailhouse Tours felt like a very safe a "COVID secure" location. Not only did it feel safe on a ghost hunt, but there was evidence all around the site of the precautions they'd put in place for guests doing tours in the day time. This included two-meter spacings on floors, one-way systems and multiple hand sanitiser stations.
MHE's team were all professional and clued up on how to make the event safe. Each team member was seen to be doing their bit to give guests the confidence that the risk of infection was low. A member of the team oversaw high risk areas where crowds might form to ensure social distancing was observed, although this was never even an issue.
Of course the safety of ghost hunting will vary by team and by location, but my experience on Friday night was a positive re-introduction to paranormal events, which is hopefully sustainable and will not add any undue risk during a these unprecedented times when the coronavirus is still very much circulating in the population.
If you'd like to book your own ghost hunt at HMP Shrewsbury, you can find more information at mosthauntedexperience.com.