10 Most Haunted Places In Manchester

These ten most paranormally active buildings in the city of Manchester are some of the most haunted locations in the whole of the North West of England. 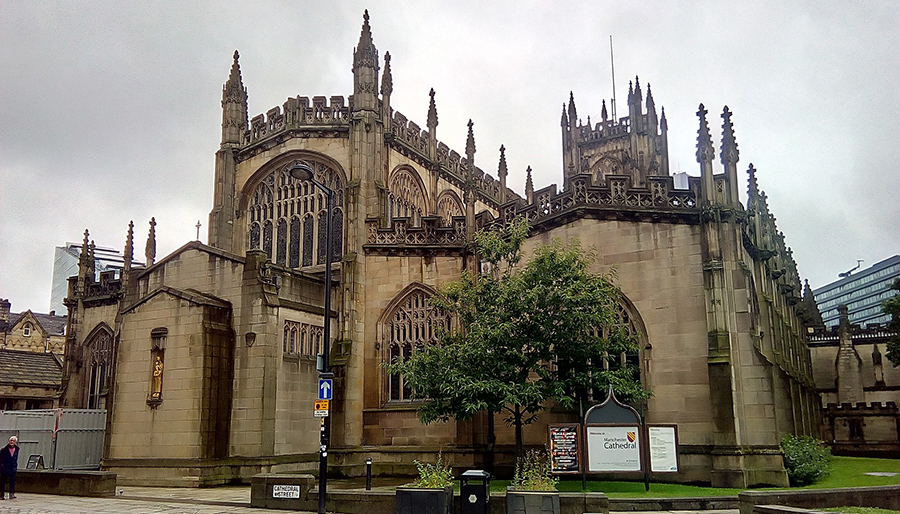 Photo: pixabay.com
Manchester Cathedral is an impressive Grade I listed gothic structure built in 1421, complete with a large and eerie crypt. The cathedral's most famous haunting story is that of a man who went there to pray in the 19th century. While there he saw his sister, Fanny, standing in an aisle. He was surprised to see her as she didn't live in Manchester, but assuming she had come to town, he stood up to call out but she vanished in front of his eyes. The next day he received a letter from his family informing him of the sad news that his sister had died.

The grounds of the cathedral and the surrounding area are also said to be haunted by a black demon dog known as a shuck. The creature is said to have matted black fur, red eyes and huge sharp teeth. A shuck is said to be an omen of death and if you see it, you should look away. 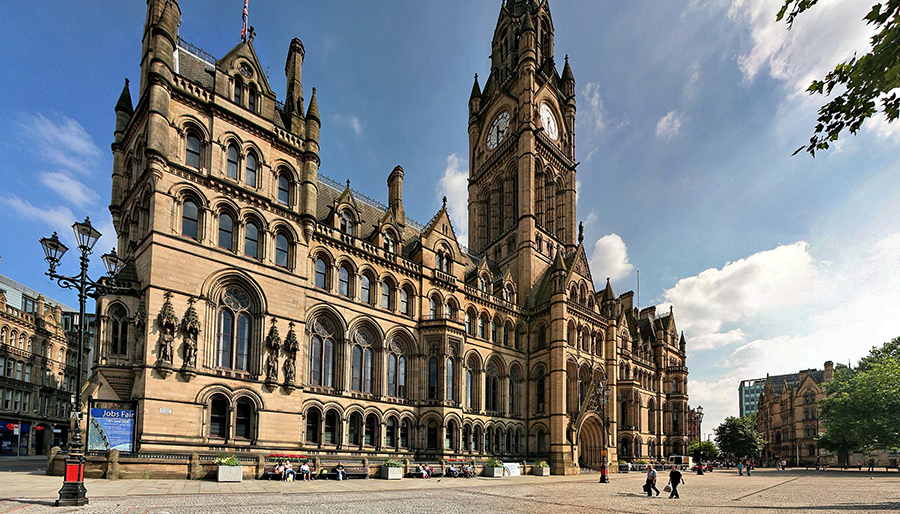 Photo: © Julius
The town hall in Albert Square was opened in 1877, it contains offices and grand ceremonial rooms including the ornate Great Hall which is decorated with murals depicting the city's history. The building is said to be haunted by the ghost of a Victorian policeman.

8. Peveril Of The Peak 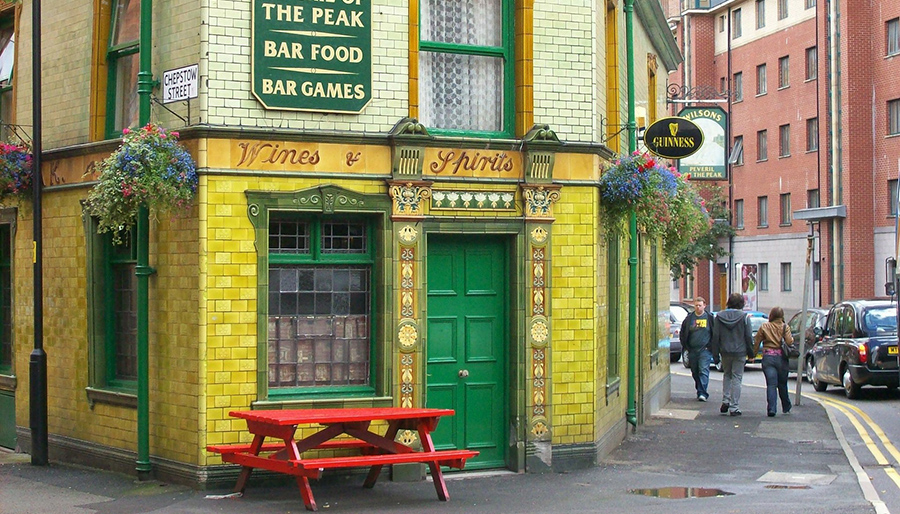 Photo: pixabay.com
This Grade II listed pub in the heart of the city was built in 1829. Nancy, the long serving landlady who's run the pub for more than 40 years, claims to have witnessed plenty of paranormal activity, including pint glasses levitating off the bar. 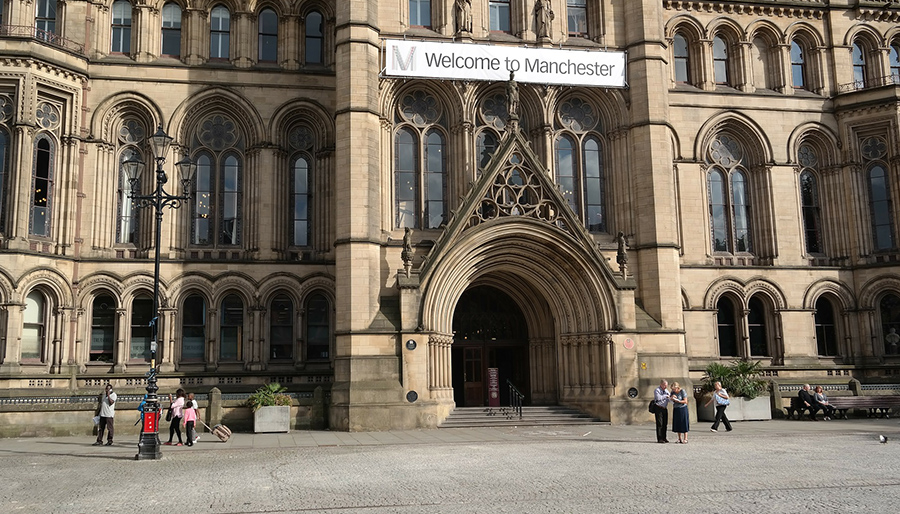 Photo: pixabay.com
The Albert Hall is a music venue in the city, originally built as a Methodist central hall in 1908, complete with a huge church organ. It was the dream of Reverend Samuel Collier. He preached to, what was described as, the largest methodist congregation in the world.

For many years the downstairs was occupied by Brannigans, a popular bar and nightclub and it was said that the ghost of a former minister haunted the night club downstairs, and what was the church upstairs. It's claimed he's responsible for for beer glasses smashing, bar staff being pushed and lights turning on and off.

It's claimed that a young girl was murdered here and her screams are still heard, there's also said to be a poltergeist that torments that staff of the venue. The haunting became so common that in 1999 the owners of the night club called in a team of paranormal researchers. 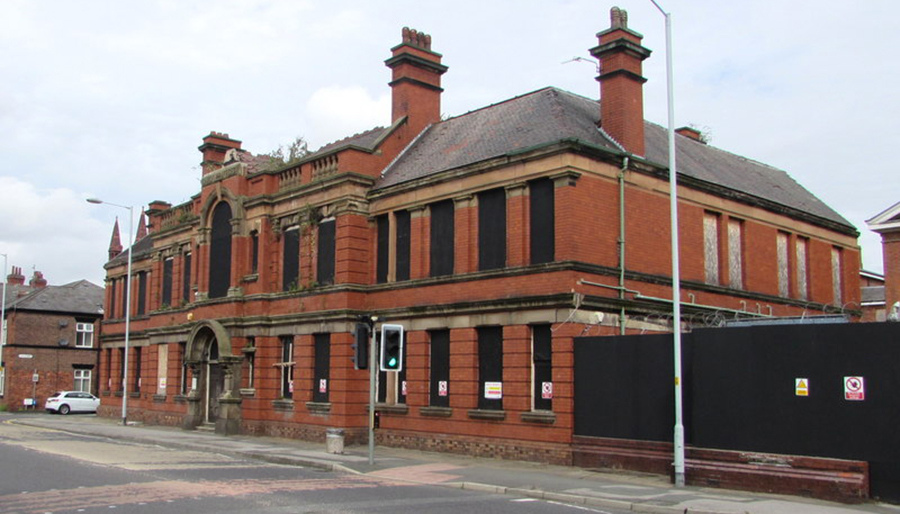 Photo: © Jaggery
St. Thomas Hospital was one a workhouse, known locally as "The Grubber". It opened its doors in 1841 to house some of Manchester's poorest families. The now abandoned building is said to be rife with paranormal activity, including a general feeling of unease, unexplained noises, reports of objects being thrown by an unseen force and even the apparition of a man. He's been spotted in one of the old offices. The mortuary is also said to be haunted by a patient who was cut open on the slab whilst he was still alive. 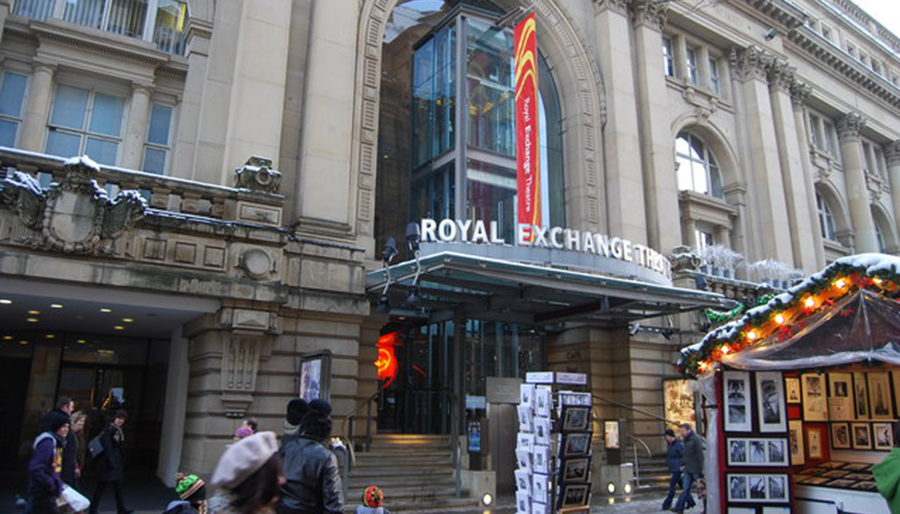 Photo: © N Chadwick
A theatre built in the heart of Manchester in 1806, although a theatre has stood on the site much longer, but was demolished to make way for the newer more modern building. The theatre was enlarged in 1847 giving us the building we see today.

The theatre has been through more than its fair share of tragedy. It was damaged by a German bomb during the Second World War, which resulted in it being closed until it was rebuilt in the mid-1970s. The bomb blast sadly killed several people.

The theatre was again damaged in 1996, this time by a 3,300lb IRA bomb, which detonated less than 50 meters away from the building.

Two people have taken their own lives in the theatre, one by throwing himself off a balcony, the other is said to be a female. Could it be her ghost who is seen in the form of an unhappy female spirit in the wig room. It's claimed that she throw objects around the room and doesn't like lilies, which are said to wilt before their time.

The green room is also said to be haunted by the ghost of a man in a dark suite who's seen with a glamorous blonde-haired lady. And the spirit of actor James Maxwell has been reported around the building, perhaps because he was so fond of the theatre. 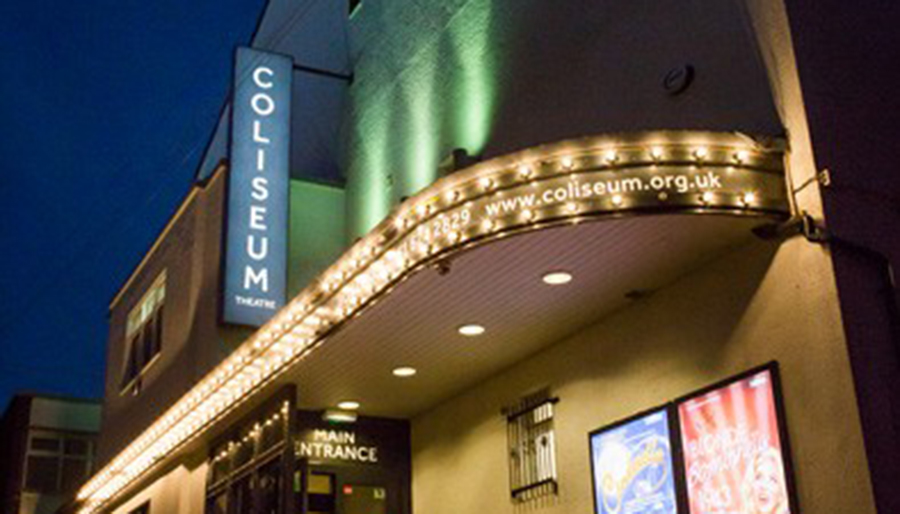 Photo: coliseum.org.uk
The Coliseum dates back to 1885, despite lots of competition when it originally opened, it's now the only theatre left in the area, although it too closed briefly in the 1930s due to financial difficulties, but opened again by the end of the decade.

The theatre's most famous ghost is that of an actor named Harold Norman, who lost his life after being accidentally stabbed during a performance of 'Macbeth' at the theatre in 1947. His ghost has been seen in the upper circle.

Another frequent spook is spotted in the wardrobe department, he's believed to be the ghost of Carl Paulsen, who died at the theatre in 1973. 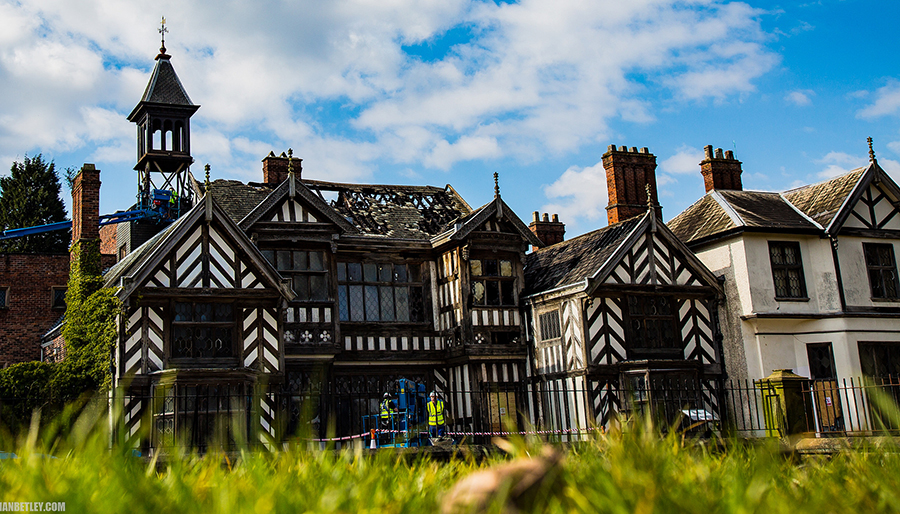 Photo: © Ian Betley
Wythenshawe Hall is a 16th century timber-framed manor house in Wythenshawe, Manchester. It is said to be haunted by a lady in white, she has shown herself to several guests over the year and others have heard her sobbing. She is believed to be the spirit of Mary Webb, a servant who worked in the house in the 1640s.

The hall is also said to be haunted by phantom monks, who are seen walking with the bottom part of their legs in the floor as if they're walking on what was once the floor at a lower level than today's floor. In the library, staff have heard strange unexplained sounds and on one occasion a security guard found that a heavy bookcase doorway leading to the servants' quarters had opened on its own. Staff and guests have also reported poltergeist activity in the form of artwork flying off of walls. 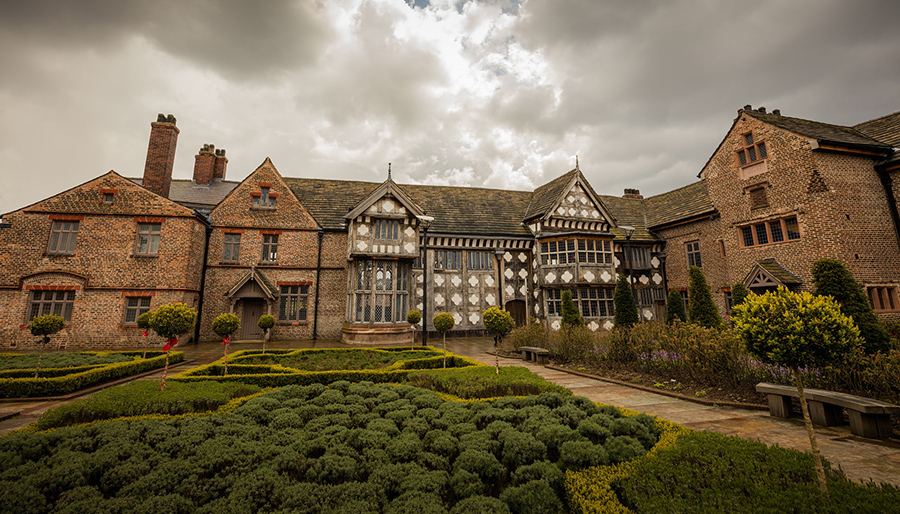 Photo: pixabay.com
This Tudor manor house in Salford dates back to the 15th century although the original hall on the site was built in 1251. The house is said to have many ghosts and the paranormal activity reported here includes unexplained knocks and bangs, disembodied footsteps and voices, doors opening and closing of their own accord and the sound of children. Guests have reported being pushed and many have heard whispers in their ears and an unseen force blowing on their face.

The ghosts believed to be responsible for these hauntings include the apparition of a lady in a white who's seen walking across the great hall before vanishing. A former owner of the property, Sir John Radclyffe, is also said to haunted to building and the spirit of a young girl called Cecily has been seen and heard running around the house. In the house's large attic, the spirits of two male servants have been reported. 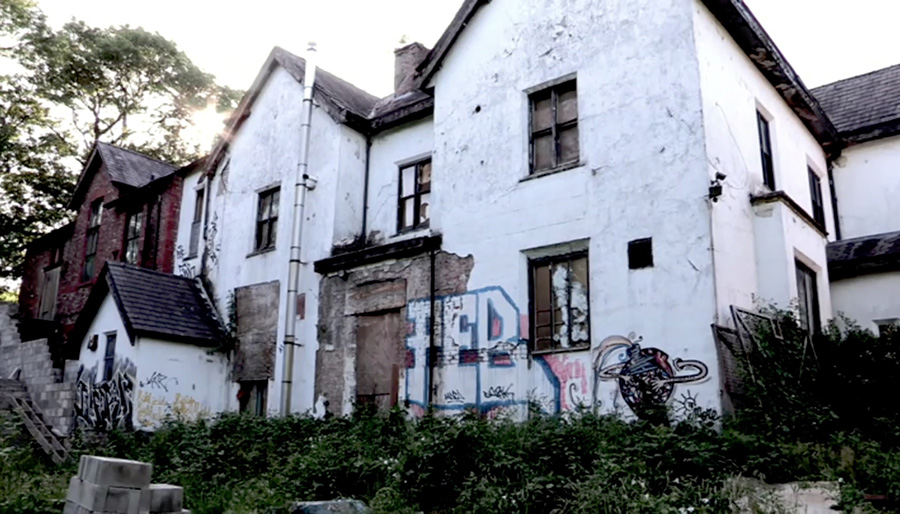 Built in 1840, Antwerp Mansion was a private residence in a gated community created for the Victorian super-rich industrialists. It now lies empty, but has plenty of stories of paranormal occurrences to tell. Strange flashing lights have been reported in unlit rooms, footsteps have been heard when no one else is around, objects move on their own with stark regularity and a feeling of unease is felt by many who enter the building.

Many people say they don't like being on the mansion's main staircase, could this be because of the many accidents that have happened here or because of the dark shadows that have been seen? On the first floor in a grand room that later became the main room of the nightclub, deep bangs and disembodied voices have been heard. People also say they feel like they're being watched and followed in this part of the mansion.

In the eerie cellars there has been reports of deep guttural growling noises and poltergeist activity is common, but the most frightening thing to happen down here is people witnessing a dark shape that is said to lurk in the corners.
This is an ever changing, dynamically updated page. Haunted locations may move up or down the list as new locations are added to our database and scores are reviewed to reflect new activity.
Tags:
paranormalmanchesterghostshaunted britain