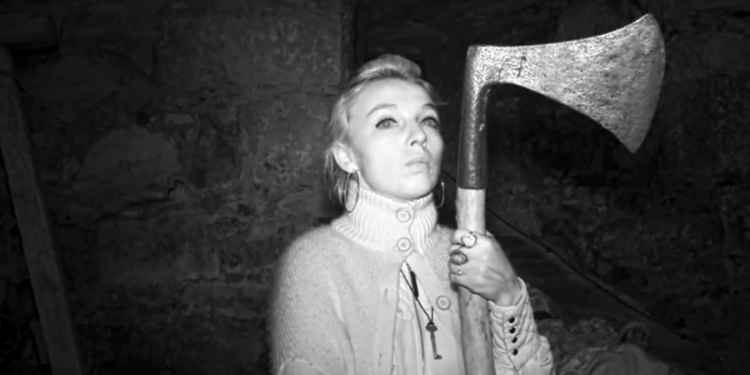 On July 13th, a brand new ghost-hunting series started on UKTV's REALLY channel. 'Help! My House Is Haunted' is created by Zak Bagans of 'Ghost Adventures'.
Bagans doesn't feature in the show, instead he sent a team of three paranormal around over to the UK to explore some of the country's most haunted houses.
The team is made up of Chris Fleming - a world renowned psychic who can see and talk to spirits directly, Sandy Lakdar - a Parisian truth seeker, and Barri Ghai, the show's tech expert. The team will travel across the UK in this new 12-episode long series, using the the latest technology to try to capture never before seen proof of the paranormal.
The episode starts with a dramatic introduction from Barri, who says "for hundreds of years, ghost and ghouls have captured our imaginations and with the advent of modern science, it's now possible to separate fact from fiction. We are a team of experts in the field of paranormal."
The first home the team investigate is one of the UK's best known haunted locations, Chillingham Castle in Northumberland. 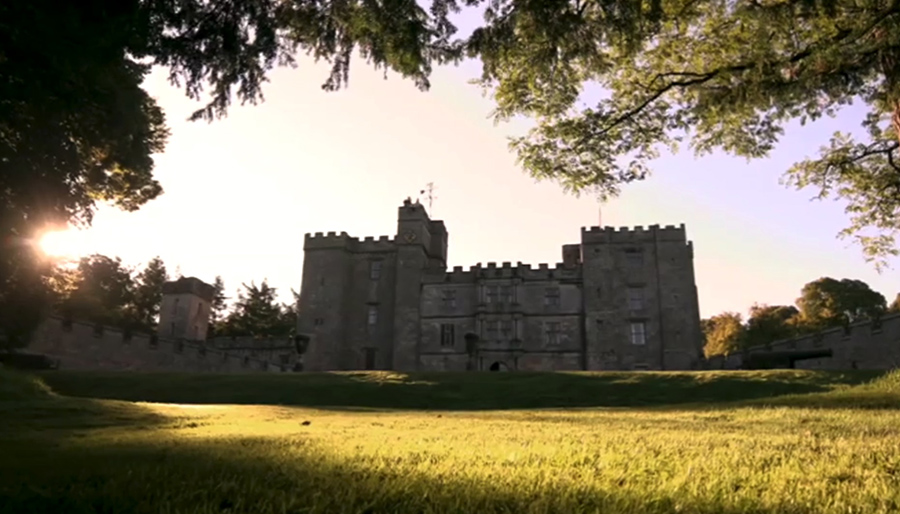 Although far from an average family home, Chillingham Castle currently holds the accolade of the most haunted hotel in Great Britain and is home to Sir Humphry Wakefield. The medieval castle in the village of Chillingham, was the seat of the Grey and Bennet families from the 15th century until the 1980s when it became the home of Sir Humphry. He has spent the last few decades restoring the Grade I listed castle, it is now a hotel.
The castle is famed for battle and bloodshed, and thousands of people have lost their lives here in the most brutal ways. According to the castle's owner, the building is haunted by good and evil spirits, so many that he was tried to get the castle exorcised, but the ritual was unsuccessful. 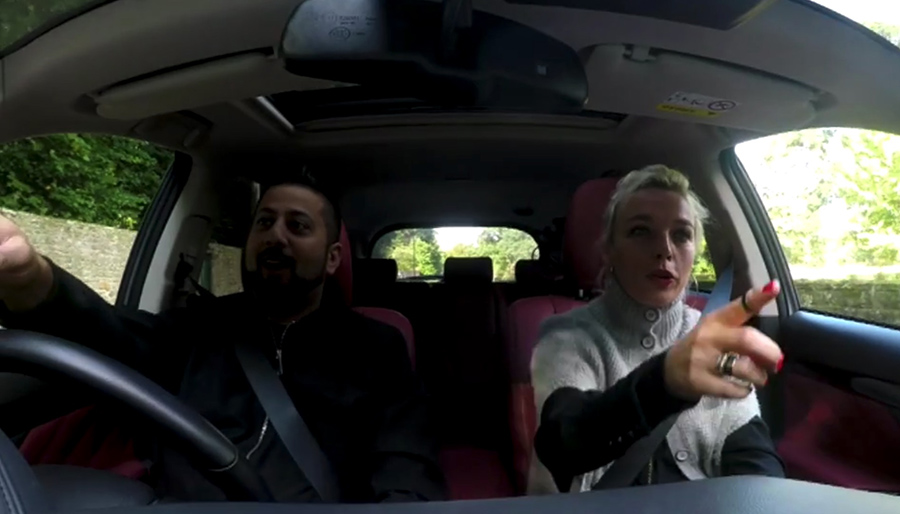 While Sandy and Barri were excited to be headed to the castle, psychic Chris had no idea where they were heading in the car on the way to the location, and although he knew nothing about the castle, his psychic powers told him that he was likely to encounter "a very dark room, stone. I'm seeing certain structures and architectures."
After arriving, while stood outside the castle, Chris said, "usually when you come to a place that's haunted, the spirits will already be aware that you're approaching" and with that he picked up on the spirit of a woman looking out the window on the second floor.
As he started to talk about the torture and punishment that he thought took place here, he was interrupted by a loud bang, which sounded like a door banging, but the team thought it might have been a gun shot or the sound of a cannon echoing from the past.
Chris was then shown to the castle's grim torture chamber in the dungeons. He said, "you don't need to be a medium or a sensitive to recognise this." 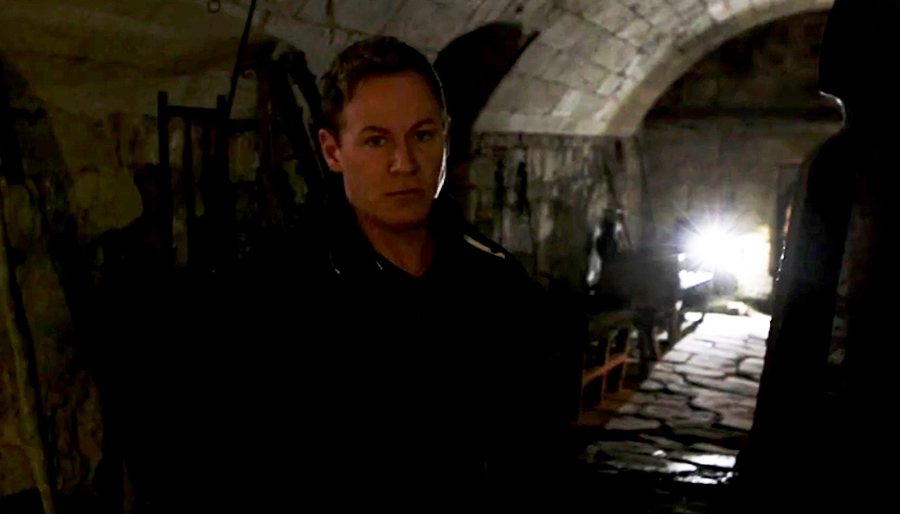 A local expert then tells Sandy and Barri about one of the castle's most famous ghostly resident, believed to be the ghost of a soldier named John Sage, who served under King Edward, but after taking a spear to his leg in battle with the Scots, was forced to retreat from the frontline and took up the role of the castle's torturer in its fully equipped dungeon.
Because the castle is close to the Scottish border, prisoners were brought to Chillingham to be interrogated by Sage, he was said to be cruel and sadistic. It's believed that at some point in the castle's history a deal was struck to release the prisoners. But Sage didn't want his prisoners released, so he tipped off the locals that they were being released and made sure that an angry mob was outside ready to hack them to death.
Chris continued exploring the castle alone, but refused to enter the room where he was picking up on the female spirit, he felt it was too negative. Instead he ventured into another bedroom where he was picking up on the spirit of an attractive lady.
Meanwhile, Barri was with Sir Humphry who was telling him about a curse that his been placed on the castle by a Spanish gypsy. It's said that should anyone steal anything from the castle, they will experience bad luck and ill fortune. Sandy was out in the grounds of the castle hearing tales of execution and how prisoners were hanged on display for all to see from a tree. 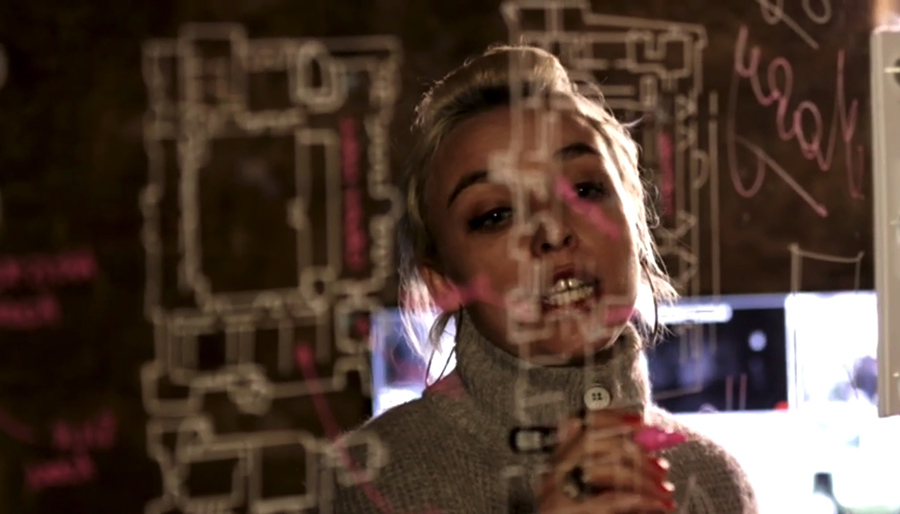 Once darkness had fallen outside, the castle was locked down and with eight static cameras placed around the building, the all night long investigation got under way, but before they got started they experienced intermittent power outages. Chris seemed to think this was paranormal, "the rest of the building was unaffected, this was a targeted attack," he said.
The team then headed to the great hall where Sandy took on the role of a servant in a role play exercise in an attempt to recreate the energy of the room from 800 years before. Sandy was a pretty bad servant and Barri calls out, "John Sage, take her away!" At this moment, Chris detected a change in the atmosphere in the room.
Moments later, the team heard footsteps coming from the stairs below them, and Chris had a "visual" of a shadow moving in front of him. Barri said, "I'm beginning to think that our role play may have taken things too far." Chris said, "to me, Chillingham Castle is coming alive with the spirits of those who died in unimaginable circumstances." 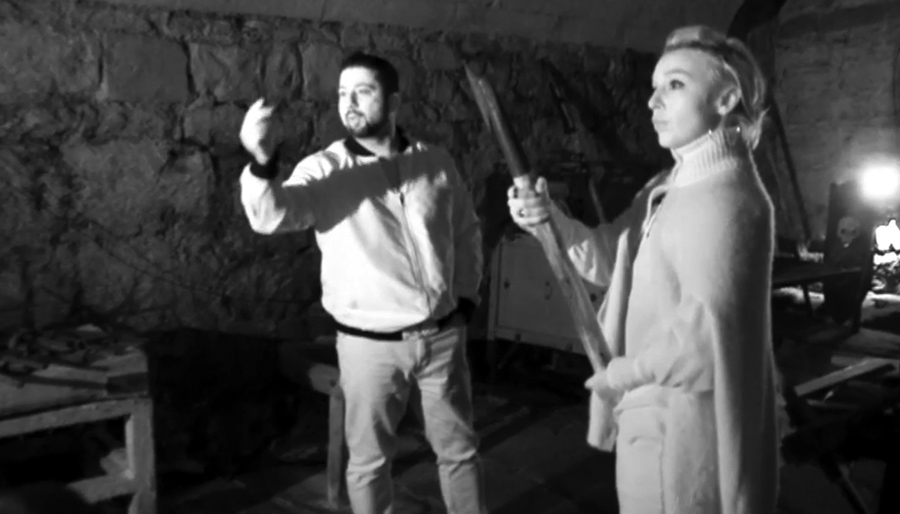 The team then moved on to the torture chamber, where Chris called out to the spirits in the hopes it would provoke activity, but it failed. So, Barri took over, shouting out, "John Sage, you're a complete coward! Any man that can murder children, innocent children, deserves to be in hell. You do not have a soul, and if you have a problem with that, you show yourself now, in front of us."
John Sage didn't show up, but Barri remained in the torture chamber alone with an SLS camera, which Barri says "maps anomalies invisible to the human eye by measuring changes in the thermal temperature and light frequency." Basically, it's designed to try to see human forms in abstract noise and when it does, the software will draw the figure as a stick man over the image.
But, with no luck, Barri headed upstairs to regroup with Sandy and Chris, where Chris planned to invite John Sage's spirit to enter his body, but as he begins to mentally prepare he picks up some familiar imagery and leads Sandy to the room he was reluctant to enter earlier in the day. Chris then says that he saw the room months ago in a dream and is now certain it's a premonition.
Barri's SLS camera then revealed a human figure floating at shoulder height directly behind Chris, but when Chris speaks to the vague human form that appears on the camera screen, it vanishes. 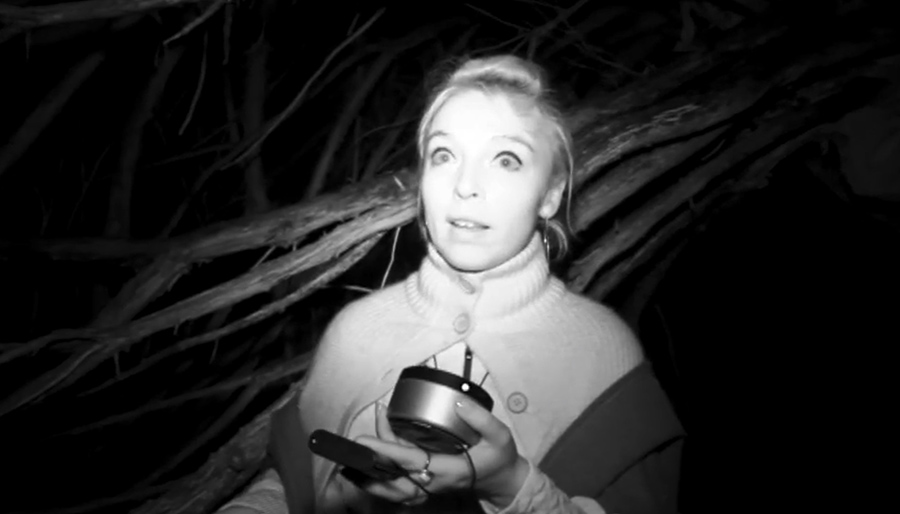 At 1am, Sandy went off to explore that castle grounds alone... well, alone with just a camera operator. She was messing around with a spirit box, a device which scans through the radio spectrum. The idea is that spirits can affect the sound and use it to communicate. Sandy heard her name coming out of the static.
Chris was alone in one of the bedrooms, looking for the ghost of Mary Berkley, the attractive spirit he'd met earlier. He's placed a REM-Pod next to an electric metal lamp on the bedside table. The device seemed to flash and beep in response to Chris' calls to the spirits to interact with the device.
Although the device was very lively, there was no sensible dialogue or conversation, I would have thought a psychic who can communicate with spirits would find it easier simply using his abilities, rather than relying on messages sent via beeps and flashes. But perhaps he wanted to produce something that viewers could see and hear.
Meanwhile, Sandy and Barri were across the hallway in another bedroom using an Ovilus device, a random word generator device, another method of spirit communication. This device spat out the words "understand" and "messenger".
The vigil ended with Sandy smudging the property with white sage, while Chris was having a heart to heart with the spirit of Mary Berkley, him telling her to move on. He said later, "after an emotional investigation, I feel confident that at least two spirits have been laid to rest."

The first episode of the show reminds me of the original 'Most Haunted' series, relying heavily on a psychic medium and various ghost hunting gadgets, but Chris Fleming is far less entertaining than Derek Acorah ever was.
But, if you like paranormal shows that are heavy on psychics and ghost hunting gadgets, then 'Help! My House Is Haunted' might be the show for you.
You can watch 'Help! My House Is Haunted' on the REALLY channel, which broadcasts in the United Kingdom and Ireland as part of the UKTV family of channels. You can watch REALLY on Freeview (17), Sky (142), Virgin Media (129) and Freesat (160), plus YouView, BT TV and TalkTalk TV.
Tags:
paranormalhelp my house is hauntedtelevisiontopicalnorthumberlandchillingham castle