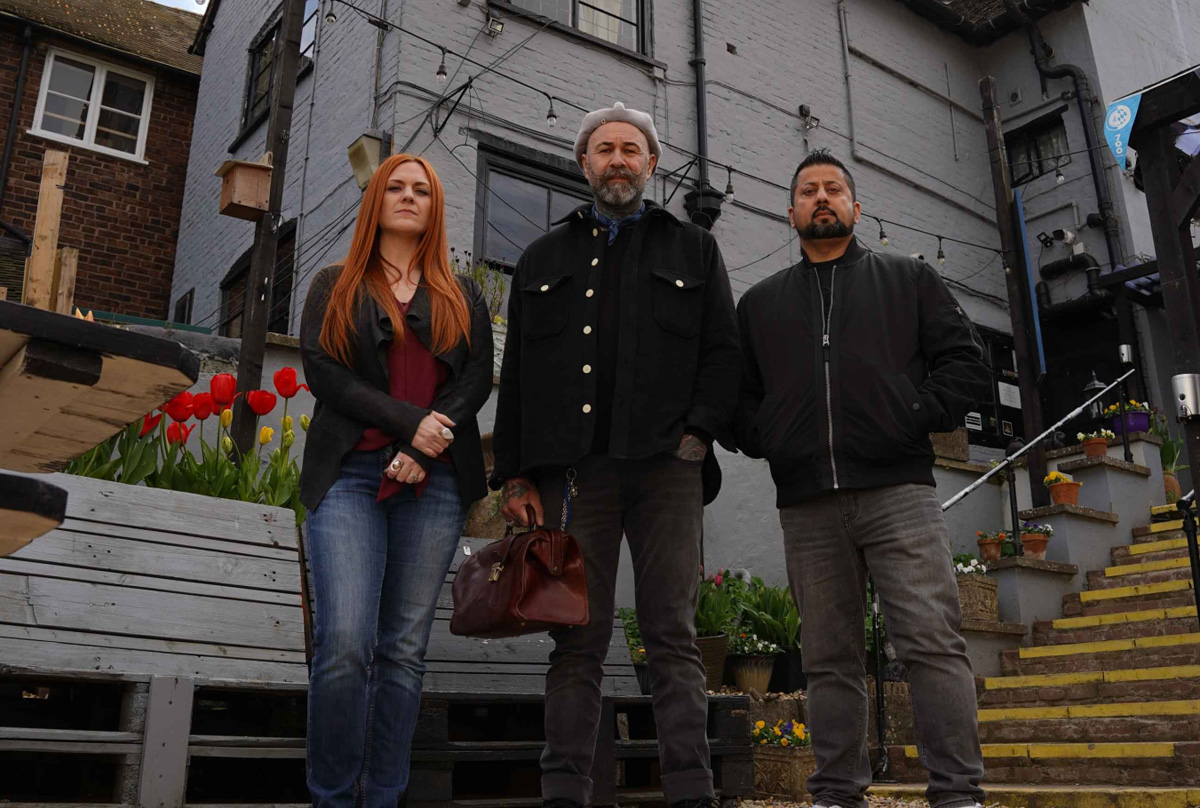 The 'Help! My House Is Haunted' Team Get More Than They Bargained At Bridgnorth's Bassa Villa

The 'Help! My House Is Haunted' team head to the historic market town of Bridgnorth, where they've been called to investigate a 16th century inn which has held a reputation as being haunted for many years. During their investigation, the team discover a brutal murder has taken place there.
The team have been called to Bassa Villa by its owner and landlord, Nick Bevan. In the episode, Nick tells us that children supposedly drowned in the cellar, and guests staying in room three have reported violent and unsettling activity, while an entity known as the "black lady" is said to lurk in room four.
While en route to the location, Ian Lawman, the show's resident psychic medium, reported a tickle in his throat. Ian, who is never told any information about the case in advance, told his teammates "there's a link thee with somebody who would have choked or had an issue breathing." Ian also mentioned ladies of the night, as well as horses and carriages. All of this already seems quite fitting with the location. 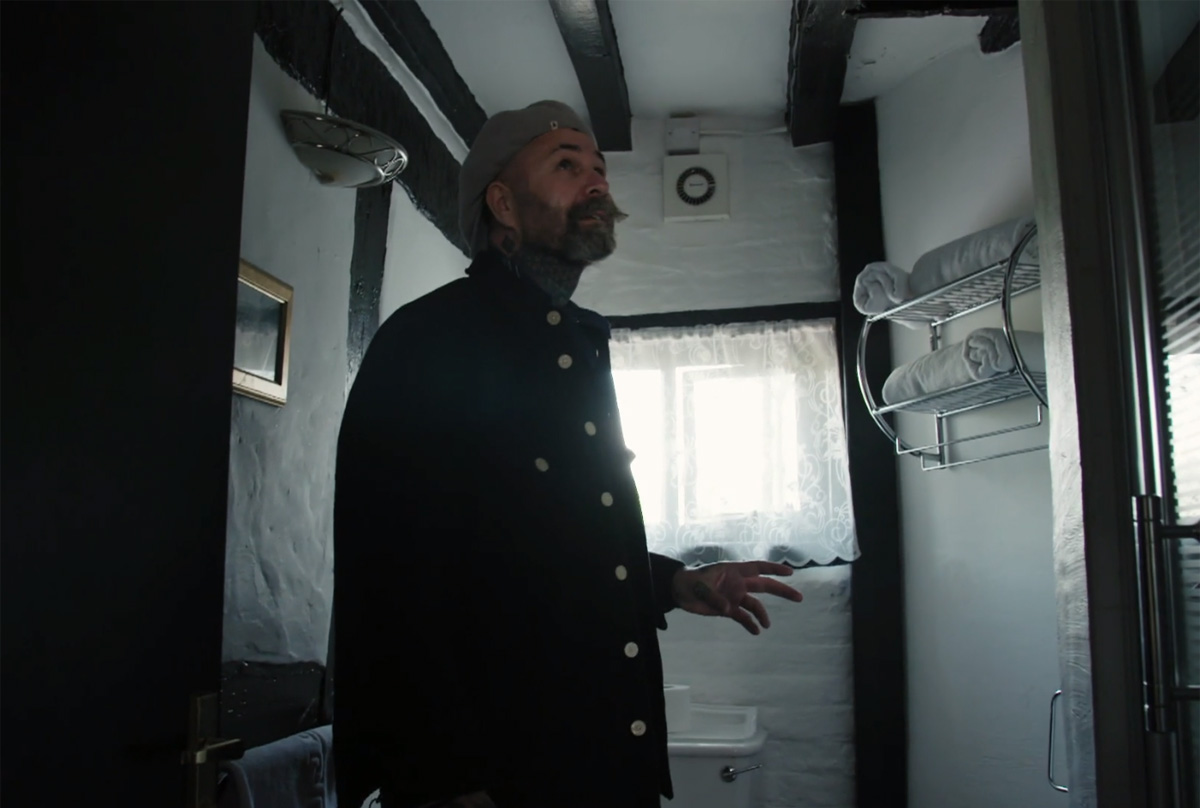 Photo: © Discovery+
Jayne Harris, went to meet two local historians, Clive Gwilt and Ian Reddyhoff. She learnt about the area's history, including its many notorious brothels and gambling dens. Plus its problem with crime, especially highwaymen.
Meanwhile, Barri Ghai had gone to find out more about the haunting from the bar manager, Ben. He told Barri, "there's definitely something going on in the pub," this included the sound of children laughing in the cellar. According to Ben, the haunting can be so intense that several guests have left their room in the night.
Ian was the first to enter the inn, initially on his own to allow him to conduct a solo psychic sweep. The medium reported feeling particularly uncomfortable in room three, and struggled to breathe in certain rooms of the inn. In the cellar Ian became aware of something below the floor level and a crushing feeling, which he said "could be my lungs filling with water." 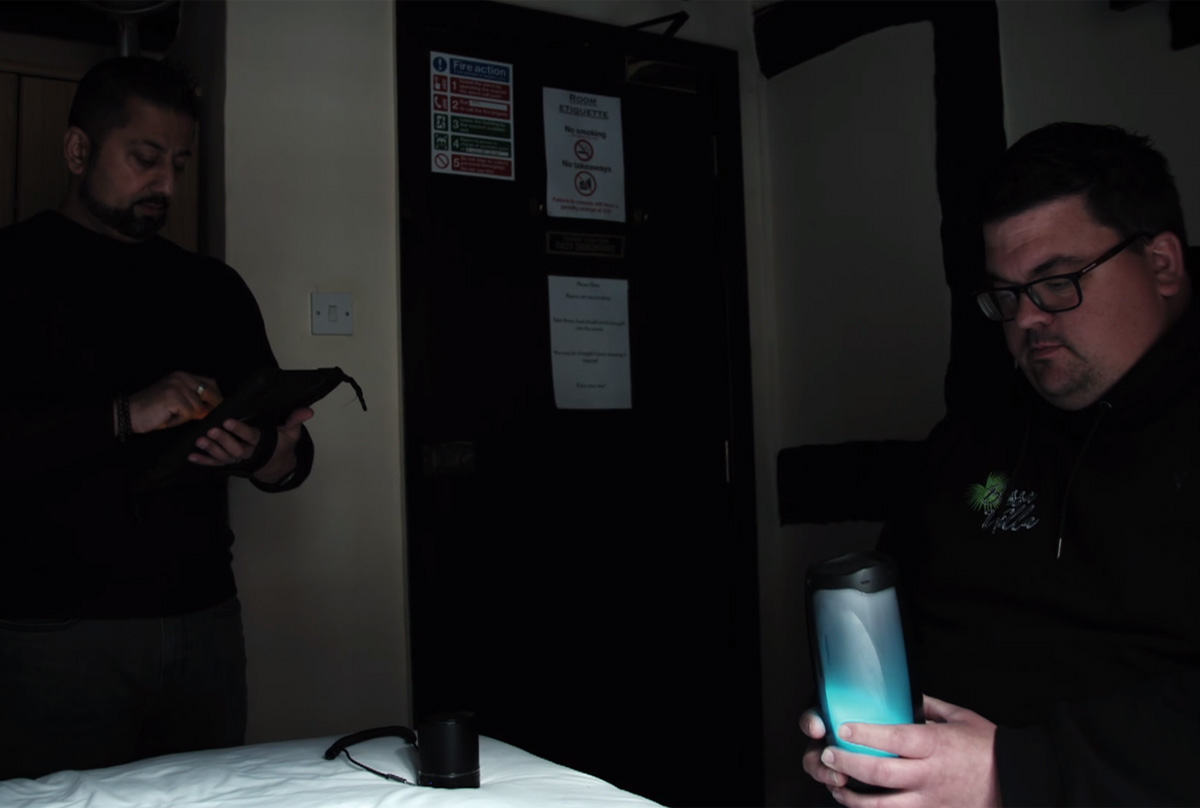 Photo: © Discovery+
The team came together to share what they'd found out about Bassa Villa and meet owner, Nick. They invite him to take part in their first experiment at the bar. They are hoping Nick's familiar presence will trigger the spirits. Ian immediately became aware of two male spirits. The team were using a ghost hunting app, which contains phonemes and word parts, it's believed that spirits can arrange these sounds to make meaningful words and sentences. When Ian asked the men to identify themselves, a three syllable sound was heard which the team agreed was a voice saying "high-way-man."
When the team started asking about the female spirits in the inn, which could relate to its past as a brothel, Barri suddenly felt as if he'd had his bottom pinched by an unseen hand. Ian said, "it could have been one of the cheeky ladies."
Before they moved on, Ian gained a psychic insight and told the others, "these two guys are making a deal to murder somebody." On the trail of this murder, Nick takes Barri up to room three, where Nick feels instantly uncomfortable, moments later he felt like something had grabbed his hand. As their vigil continued, the ghost hunting app seemed to confirm that the victim of the murder was a man named Edward.
Jayne concludes the session by telling us, "I think that that spirit triggers has given us loads." Barri agreed that they'd uncovered names and motives. He explained, "Edward was tempted upstairs by Eve, before being robbed and shot dead by one of the two highwaymen." 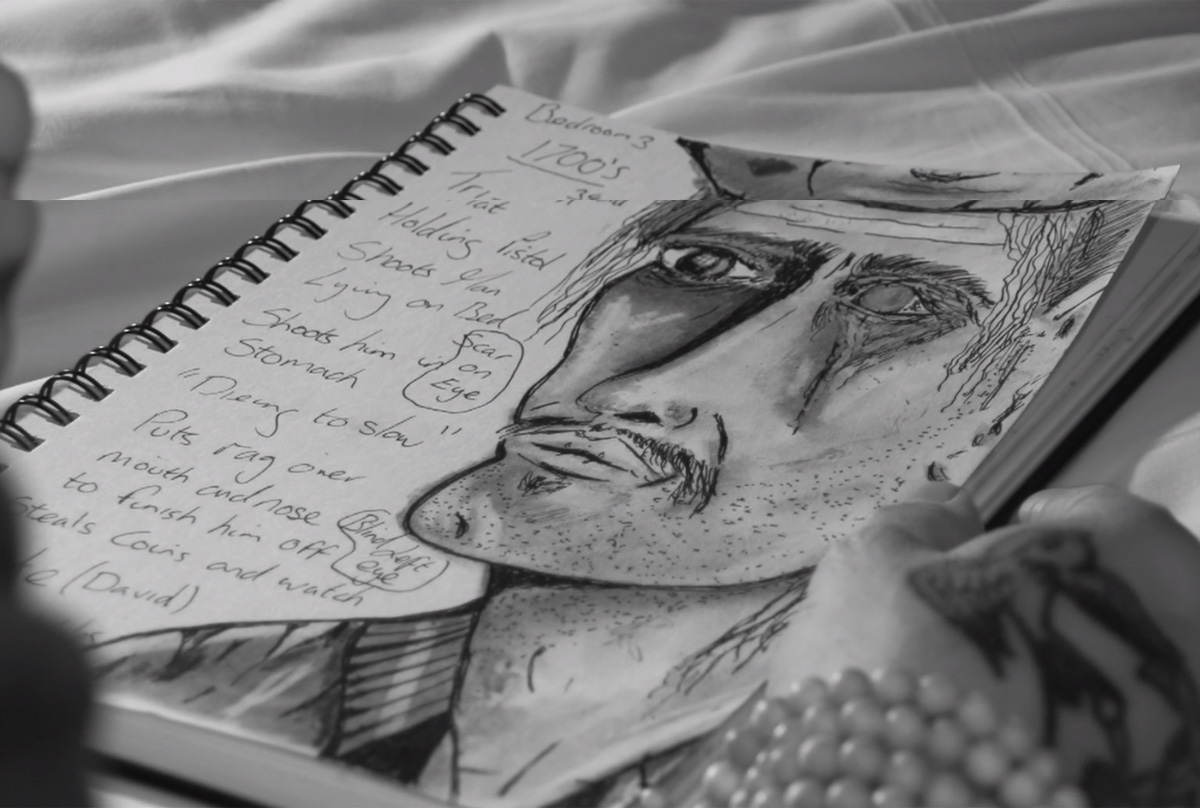 Photo: © Discovery+
The team were then left alone in the inn for their nightlong investigation with the help of Andy Moore, a talented psychic artist who the team hopes will be able to draw the spirits lurking at the inn. He sketches an aggressive looking man and provides information about who he thinks this man is.
Barri, Jayne and Ian were in room one, where they were hearing what sounded like a female voice through their ghost hunting app, they believed this to be a former landlady of the inn.
Later in the cellar, the team find that some of their trigger objects had moved and a camera had been knocked over. Unfortunately we weren't shown the footage from this camera, perhaps the motion-activated camera failed to capture the moment. However, a proximity sensor attached to a doll in the middle of the cellar floor seemed to be triggering on command.
Towards the end of the investigation, the team head back up to room four, where Barri saw the shadow of a person walking past the bathroom door. Moments later Barri jumped as he felt something touch his head. This was followed by Ian find a door knob had fallen off of a cupboard and then the toilet seemingly flushing of its own accord.

The episode ends with the team attempting to bring peace to the property by moving the spirit of the murderer on, as well as helping the other spirits cross over. They do this by praying for the spirits and spiritually cleansing the inn.
It's normally in this point in the series, episode 12, that we have to say goodbye to the team, but this series is actually made up of 15 episodes, which means there's still three more cases to look forward to before the end of the year.
You can watch the full fourth season of 'Help! My House Is Haunted' so far right now on Discovery+, with a new episode dropping next Friday.