Help! My House Is Haunted: 'Shook To The Core' - Series 4, Episode 4 Review 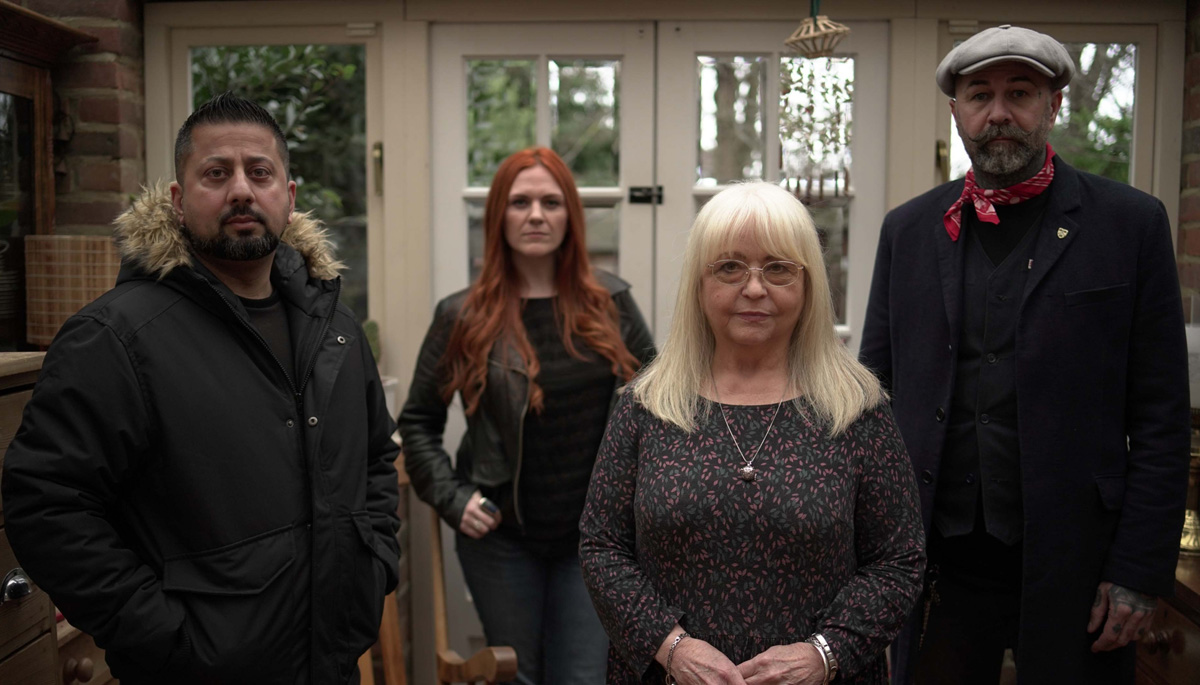 The fourth season of 'Help! My House Is Haunted' continues as the team are called to the south coast by the owner of a haunted home in Kent, who is too terrified to sleep. In the fourth episode, entitled 'Shook To The Core', Ian Lawman, Jayne Harris and Barri Ghai come face to face with a demonic entity that takes them by surprise.
The team are in the town of Broadstairs, a coastal town which Jayne tells us has connections to Charles Dickens. They're investigating a 1920s house, which is home to Gillian. The homeowner said in the episode, "when we first moved in, we'd get paranormal activity."
At first Gillian believed that the benevolent activity was being caused by the spirit of a previous owner, who she called "the Perfume Lady." More recently she feels the happenings have escalated and taken a more sinister turn, after something more malevolent was released from her bedroom mirror during an earthquake.
Gillian says she needs help from the team to find out what this evil thing is, adding "if the team could get rid of this, I could relax and maybe I could start sleeping again." 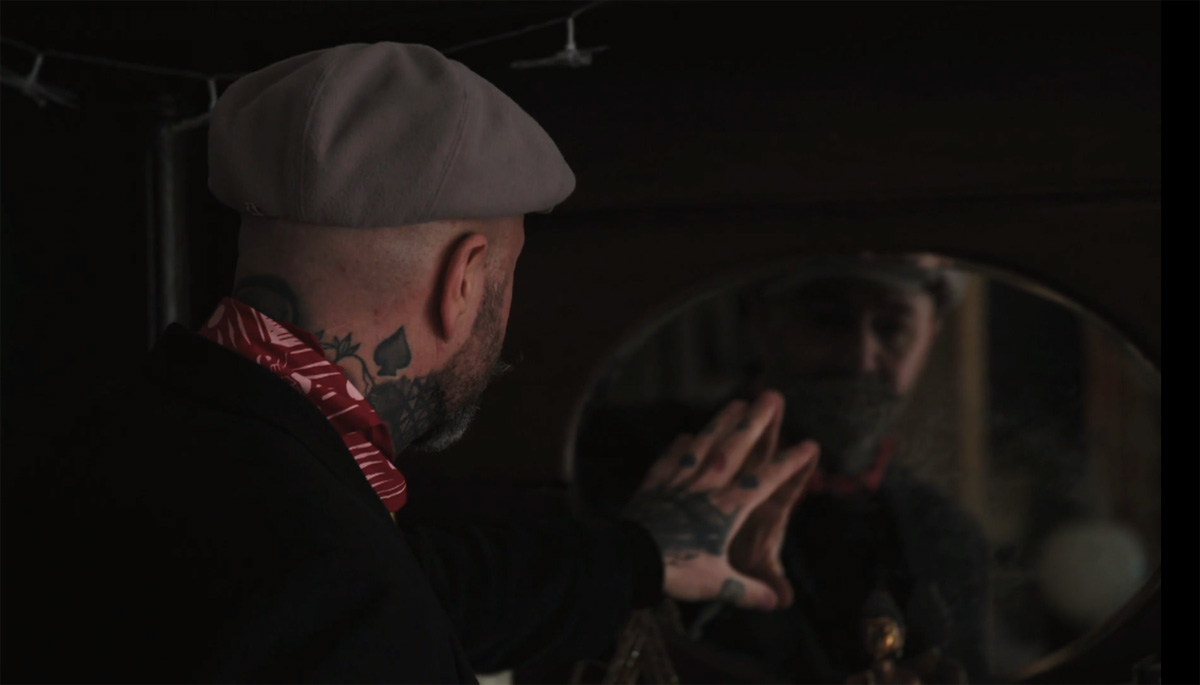 Photo: © Discovery+
As the show's resident psychic medium, Ian knows nothing about the investigation in advance, but while en route to the location he was able to connect to the property and tell his teammates that he was aware of a female energy. He said, "she feels very comfortable, she feels nice energy." But he added that there was another energy that he felt uncomfortable with. The psychic explained, "I kind of feel there's going to be something quite negative."
As always, Ian is the first to enter the house to allow him to conduct his initial psychic sweep alone. Ian was instantly drawn towards a mirror in the living room. He said, "I just know that I would be able to see spirit[s] in this mirror, if I stood here long enough."
Ian then makes his first spot-on claim by telling us, "I certainly feel there is a lady who connects to this property, who could have lived here." Breathing in the air around him through his nose, he added "there's a really strong smell, of almost like a rose or a flower smell, that's coming from spirit actually."
Ian said that he felt uncomfortable as he climbed the stairs to the first floor. He said, "there's an energy under my feet," adding, "it just feels like it's a big vibration."
Later in Gillian's bedroom he said he felt comfortable, but seconds later found that part of the blinds in the window, a hanging metal pole that can be twisted to open the slats, had started swinging. Ian said, "that just goes to show you, no matter how comfortable you feel in a house, if spirit[s] want to tell you something they'll communicate with whatever."
Ian concluded his investigation by saying, "something's definitely come from the ground upwards." He continued, "I feel that the vibration of the property has 100% manifested something quite dark and miserable." Then Ian found the cause, the mirror in Gillian's bedroom. He confidently said, "I feel that something has travelled through this mirror." 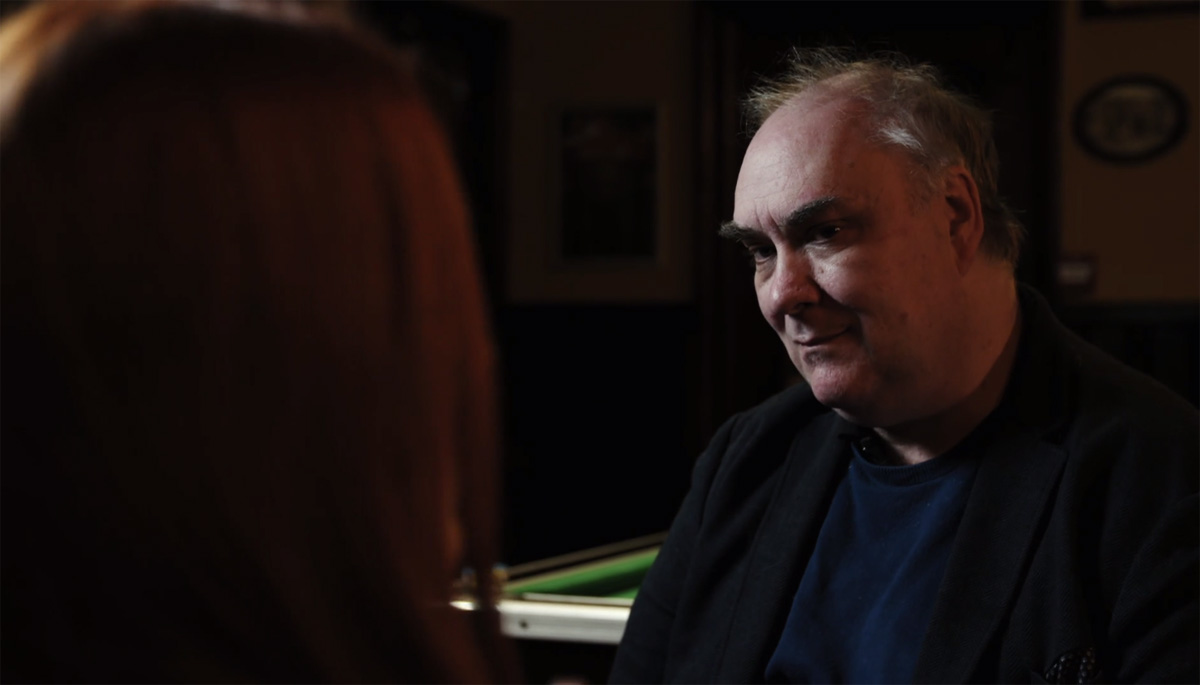 Photo: © Discovery+
Jayne wanted to find out more about Broadstairs and discover whether any of the local history could explain why the house is haunted. So she met up with a man who is a bit of a legend in the paranormal world, Christian Jensen Romer. Jayne wanted to know if a 2015 earth tremor in Kent could have been the catalyst that started the case.
Christian told Jayne about some research he was a part of back in the 90s. He said, "we took a map of Gloucestershire and we looked at the hauntings, and we looked at where there were three or more ghosts in the same area, the same building and on the same street, very close together." Overlaying this data on a map of fault lines, the researchers discovered a pattern, as Christian explained, "what we found was, yeah, earth tremors are associated with hauntings."
Meanwhile, Barri went to meet Gillian's son Peter and his wife Gem, who had personal experiences in the house while living there for a short time. The couple have experienced a vase of flowers being seemingly thrown off of a piano, and mirroring what Ian had mentioned, Gem says she always feels anxious on the property's first floor, "as soon as I go up the stairs and I'm in that landing area, I always get a little bit like... my heart jumps a little bit, I don't know what it is about that landing but there's something there," she said. Peter also made a link between the escalation of the activity and the earth tremor. Gem added, "it's become a lot more sinister so that's probably had quite a negative effect on her." 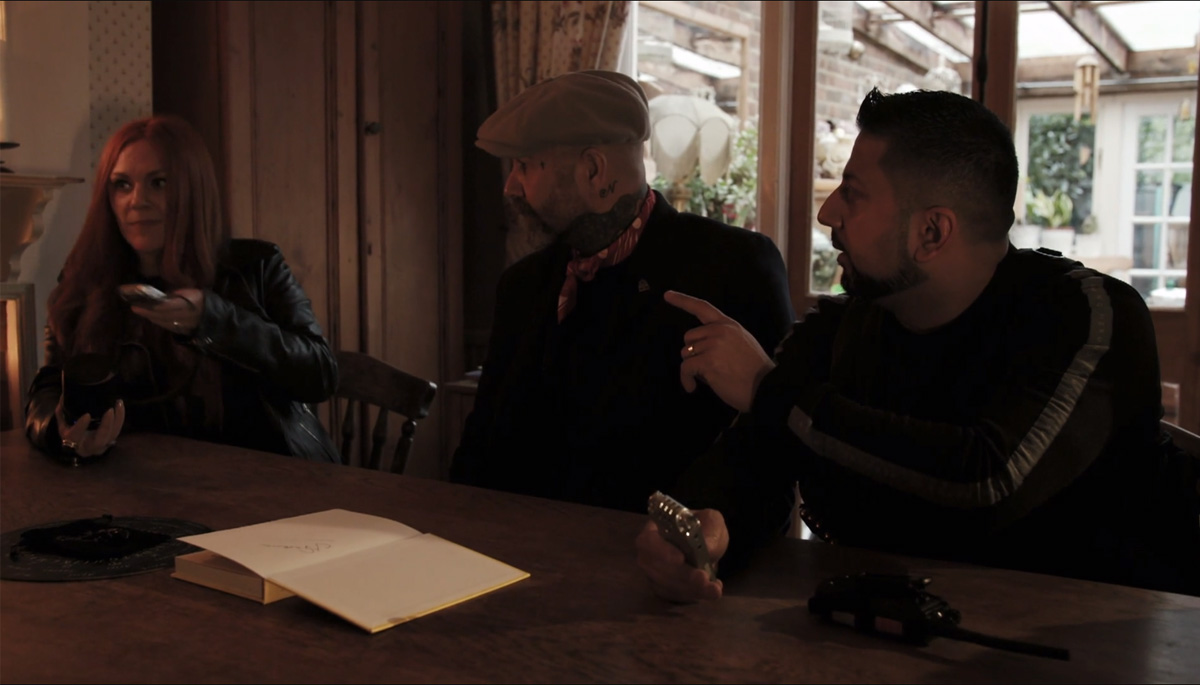 Photo: © Discovery+
The team came together to share the findings from their initial investigations, before meeting with Gillian. They invite her to take part in a spirit trigger experiment with them. They hope that her familiar presence might encourage any spirits present to interact.
They began in the kitchen where they conducted an EVP session. This involved using a handheld digital audio recorder to attempt to capture EVPs, or Electronic Voice Phenomena. Ian called out, "can you tell me if you have any links with this house" and when they played the recording back, they heard a very strange sound that hadn't been heard at the time. It's not clear whether it was the sound itself they were referring to or something partially masked by the sound, but the three investigators agreed that they could make out the words "that's me" in response to Ian's question.
Their session was cut short when they heard a metallic sound, which Barri discovered was a bell on the landing. Jayne and Gillian join Barri on the landing. Barri was using an SLS camera, a special type of camera that uses 3D mapping technology to detect human shapes and highlights them on its screen in the form of a stick figure. Before long, Barri saw a twitching figure floating next to Gillian. Moments later, a small dancing figure appeared on the ceiling of the room behind her.
Barri called out, "are you human?" And a voice through a ghost hunting app Jayne was using seemed to say "imp". He questioned further asking how many imps were presented and an abrupt grunt indicated "three". Barri told the already terrified homeowner, "I think what we might have here are imps, some people call them demons, but they are essentially lower-vibrational entities. They come from the earth."
Barri thinks it's possible that the earthquake has released three of these dangerous imps into Gillian's home. 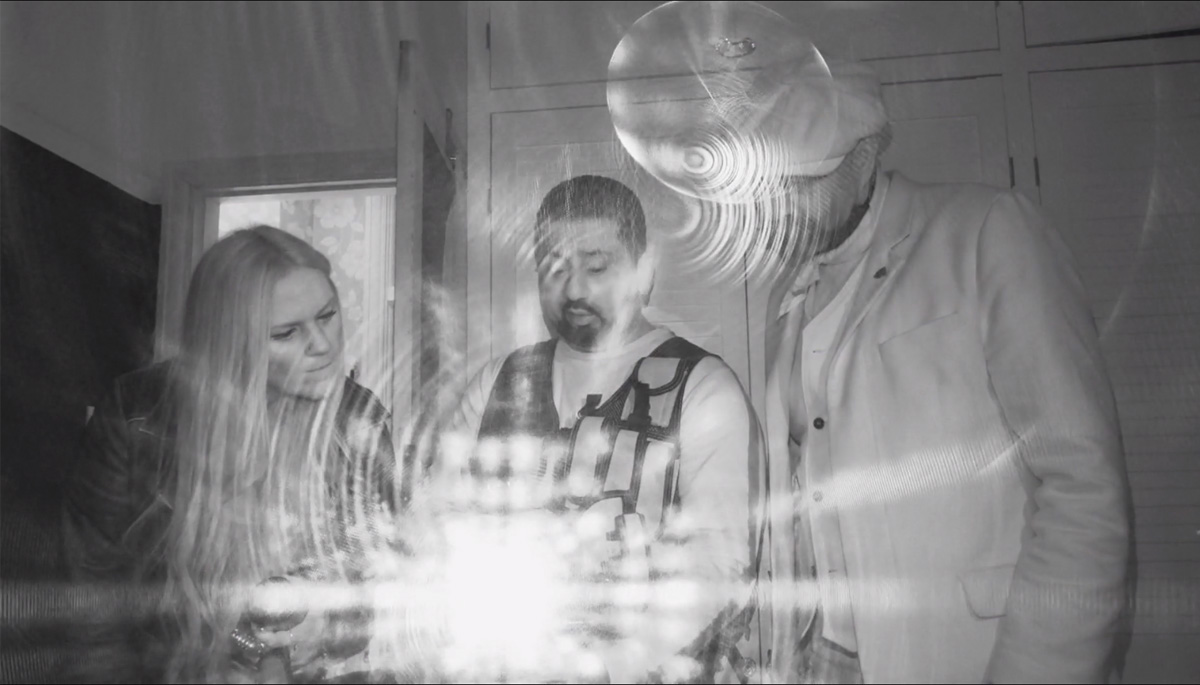 Photo: © Discovery+
After Gillian had left for the night, Barri rigged the house with static cameras and the team began their investigation in the lounge where Ian had become aware of the spirit of the perfume-scented woman during his initial walk around. They once again attempted to capture EVPs, this time in the hopes of contacting the former owner of the house and confirming the presence of imps.
As they tried to make sense of a voice that came through, they heard footsteps upstairs and went to investigate. As they entered a bedroom Ian discovered that the metal pole used to open the blinds that he'd seen swinging earlier had now been thrown off of the blinds all together.
Barri decided to scan the room with his SLS camera and soon found an erratically fidgeting figure stood next to the mirror. As Jayne walked past the spot where it was visible on the screen, the stick figure shark into an abstract mess and seemed to swirl into the mirror and vanish. Barri said this SLS capture is "mind-blowing evidence" that something is using the mirrors to access the property.
Later the team go up to Gillian's bedroom where Jayne is keen to try something that Christian suggested to her. She wants to create a psychomanteum. This is actually a space in which to conduct an experiment. As Jayne explains, the experiment is basically mirror scrying. This is a technique where you gaze at yourself in the mirror in a low light setting in the hopes of catching a glimpse of a ghost.
Jayne set up a makeshift psychomanteum using the mirror in Gillian's bedroom and a large bath towel. She immediately started to see her face distorting in front of her and before long started acting strangely and touching the mirror. She said, "I don't actually feel like it's my hand doing it, I feel like the other hand I can see is pulling my hand towards it."
The investigation ended with Ian leading a séance to contact the previous owner of the house to ask if she needed help being moved on. The final task was to bless and cleanse the house, and close the portals. Ian does this by saying prayers around the house, while Jayne rids the house of negative energy by passing burning sage through each room.

The episode was a bit of a victim of the success of the previous episode, in which the team captured one of the clearest EVPs they'd ever heard. This week the EVPs paled in comparison. The only other meaningful evidence they captured was the word "imp" once through an app, and footage from the SLS camera. The moment where the stick figure appeared to jump through the mirror was probably the best example of an SLS camera being used in a ghost hunting show.
You can watch the full fourth season of 'Help! My House Is Haunted' so far right now on Discovery+, with a new episode dropping next Friday.