Help! My House Is Haunted: 'Spirits Of The Shipwreck' - Series 4, Episode 6 Review 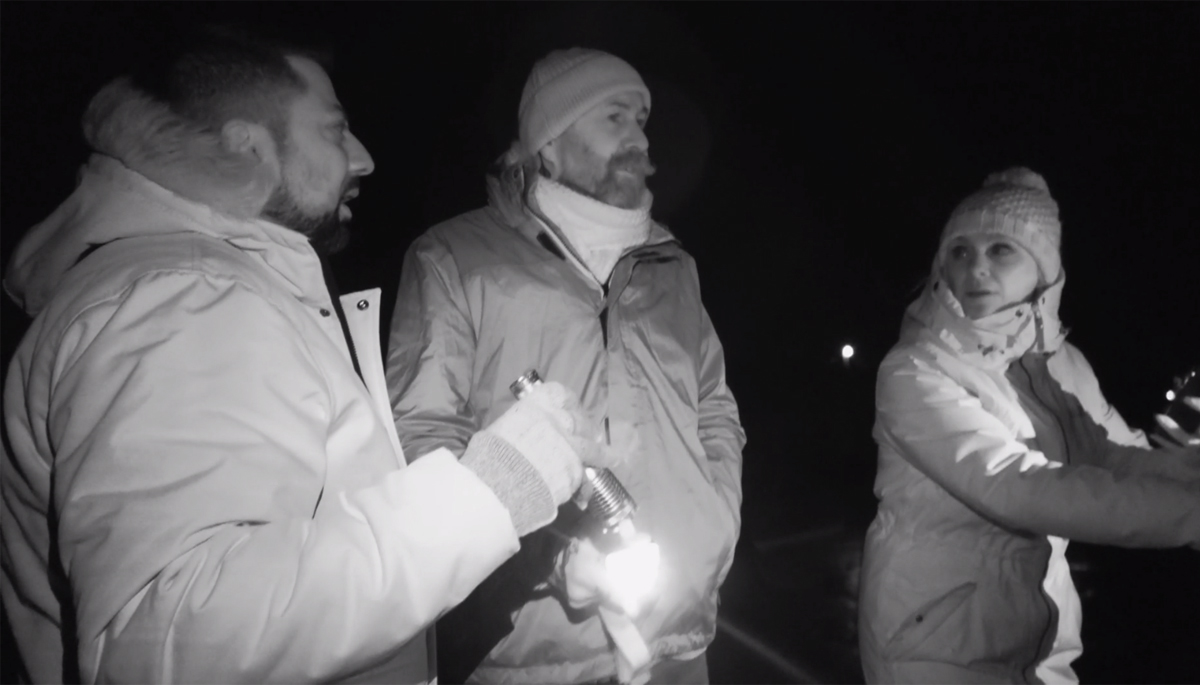 The 'Help! My House Is Haunted' Team Free The Spirits Washed Ashore In An 1802 Shipwreck

The 'Help! My House Is Haunted' team have been called to a historic seaside town in Kent to get to the bottom of a haunting linked with a shipwreck that may have washed up more than just flotsam.
Ian Lawman, Jayne Harris and Barri Ghai at the home of Julie and Bill in Dymchurch, where Jayne tells us there has been a settlement since Roman times, and has connections to smuggling as well as some of the worst shipwrecks in British history.
Julie, who moved into the bungalow five years ago with Bill said, says she's heard unexplained singing and whistling in the home. This may not sound too sinister, but Julie tells us in the episode, "my son, Aaron has had paranormal activity in his room as well. It sounds like things being lifted up, moved around." She also says that they've seen orbs and heard voices.
Bill, who admits he was once a skeptic, said "I feel the voices can only be explained by paranormal reasons, there is nobody else, it's not the voice of anybody else in the house."
The episode, entitled 'Spirits Of The Shipwreck', suggests a link to the see, but could Julie's unusual collection be the source of the haunting? She explained, "I collect so much strange stuff, I have lots of dolls and they have come from all over the place." She's recently added a big scary clown doll to her collection. 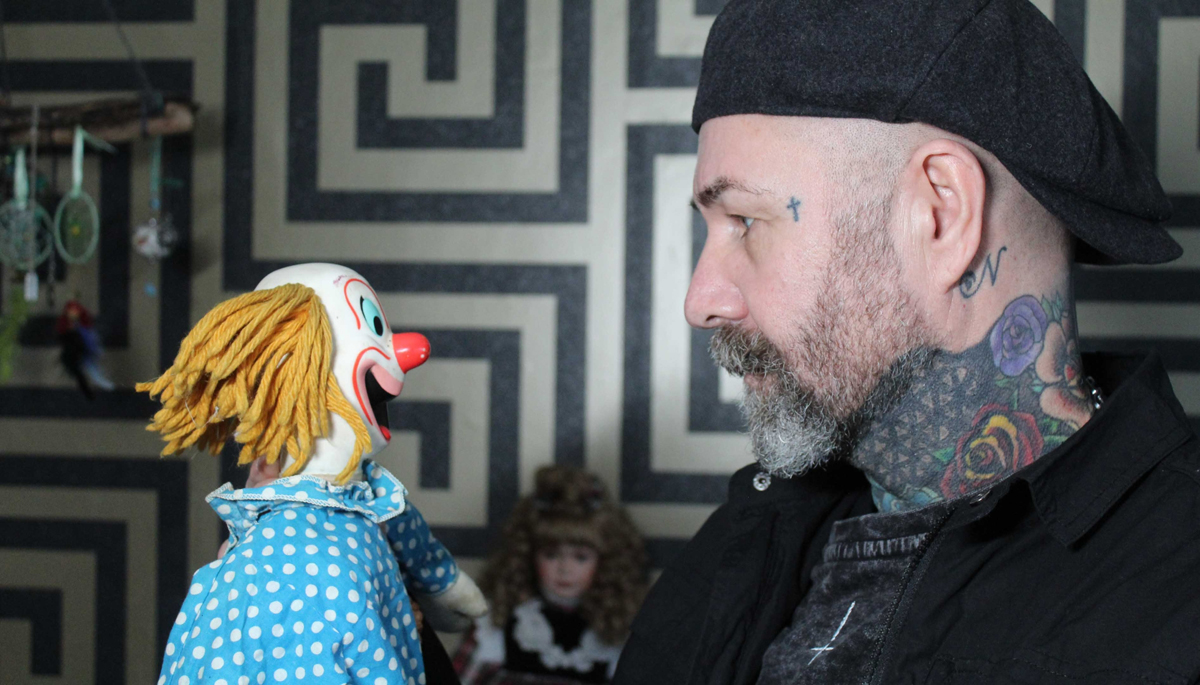 Photo: © Discovery+
Ian is the show's resident psychic medium and insists on knowing nothing about the investigation in advance, but he's always able to glean an insight as they near the location. This week, Ian told his fellow investigators, "I just think as soon as I walk into the property the energy is going to be really bizarre, strange. It could be a conflict of energies I feel." He added, "so it could be from artefacts, it could be from spirits that are there. Also I feel there could be outside energies as well."
It wasn't long until Ian could experience the strange mix of energies in the property for himself. As always, he was the first member of the team to enter for a solo walk around. Ian's hunch was right, upon entering he described the energy as "absolutely crazy."
The first thing Ian noticed was Julie's collection, which included witch figurines, puppets and mannequins. He said, "I feel there's something that's taken place, something spiritual, whether it's outside the property or inside the property, and this can cause an attachment."
Ian also picked up on a connection with the ocean and questioned how close the shore is to the property. He said, "I'm seeing shipwrecks."
Meanwhile, Barri went to meet Julie's son, Aaron, who told him about the shadows he's seen around the outside of the bungalow, as well as the sounds and movement he's heard around the home. Aaron thinks his mums collection of dolls are to blame.
Jayne was also on a mission to find out more about the house and the local area. She met with local historian, Collin Walker, who thinks that the haunting might have a connection with a ship that wrecked in 1802 on the shore nearby, killing 454 passengers. He tells Jayne that these bodies washed up along the coast, including right outside the house she was investigating. 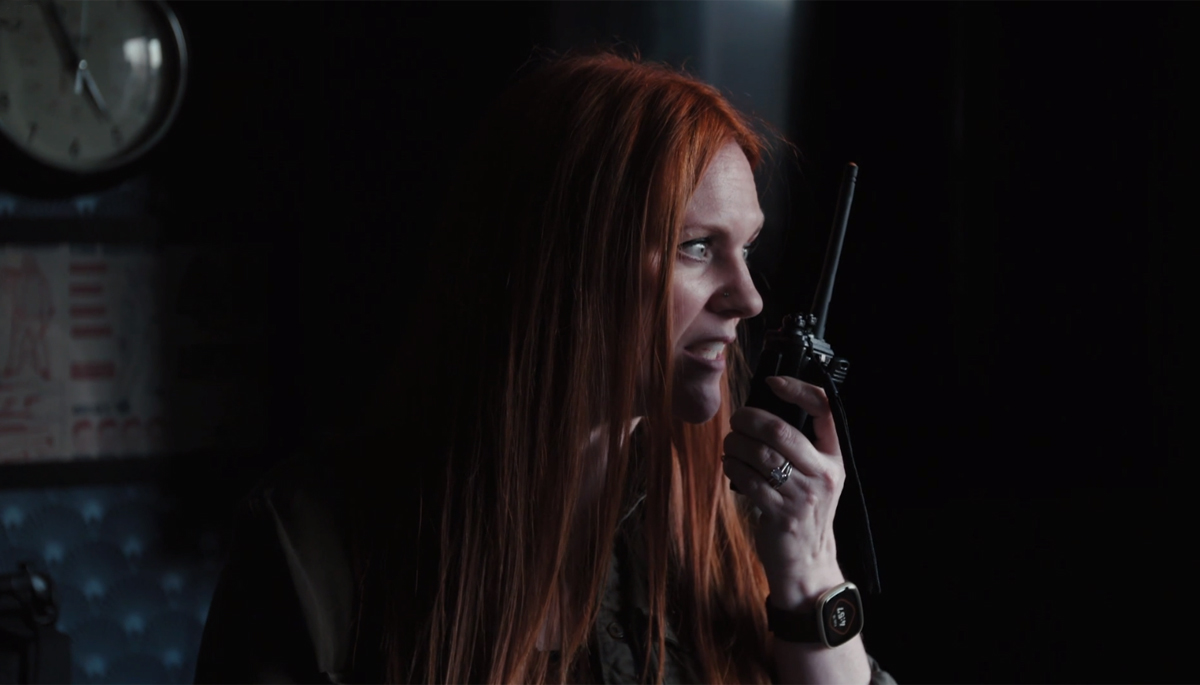 Photo: © Discovery+
The team came together to share the findings from their initial investigations with Julie and Bill, and invited them to take part in the first part of their investigation, which they call spirit triggers. They hope that their familiar presence might encourage any spirits lurking in the house to interact.
They begin in the living and bring along with Julie's Bozo the clown doll. Almost immediately a phrase came into Ian's head, which didn't like with the clown at all. He was a little bit unsure of the correct pronunciation, but Julie recognised it as "Melville Castle", which was the name of the ship that wrecked nearby. Ian said, "well somebody off that ship's in this house." Soon Ian concluded that it was the ship's captain haunting the house. 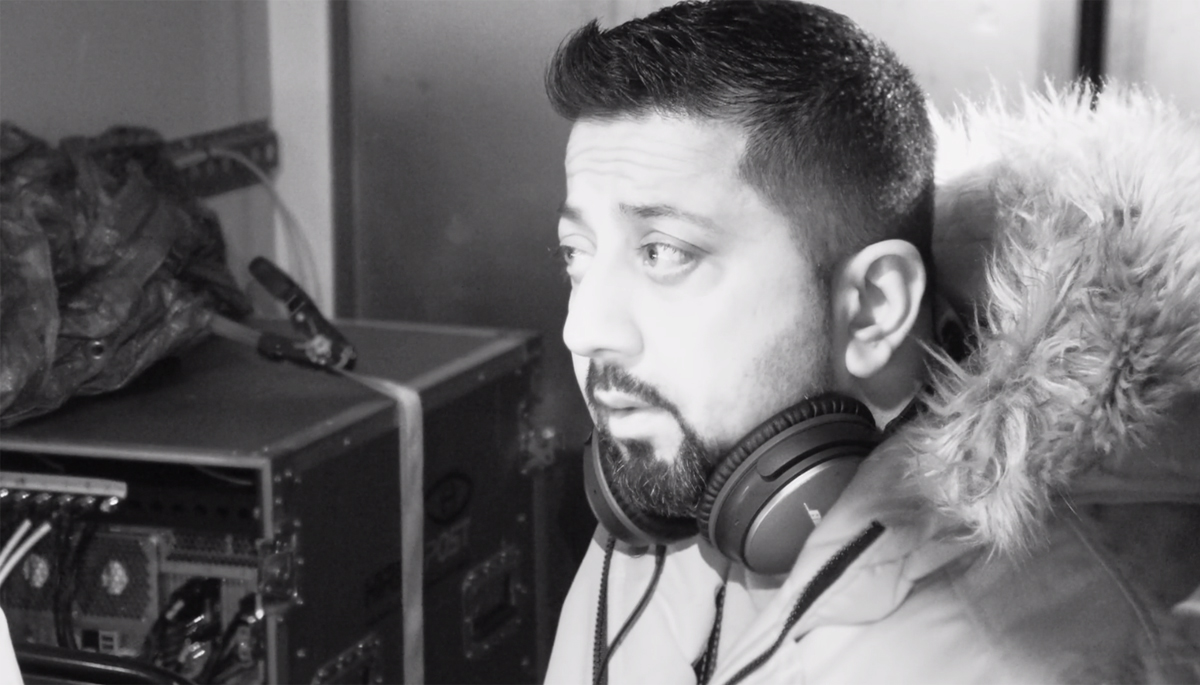 Photo: © Discovery+
After Julie and Bill left the property for the night, Barri rigged the house with static cameras and the team began their night-long investigation, but instead of starting in the house, they decided to visit the shipwreck for themselves. Very little of the boat remained, but there were signs visible at low tide.
Jayne is using ParaTek, an app that can generate words based on the belief that spirits can influence the magnetometer and accelerometer sensors in a mobile phone. Based on variations in these sensors' inputs, the app selects words from a pre-loaded database. They got some interesting and potentially meaningful responses, including the word "ship".
Later, back at the house, the team focussed their attention on Bozo the clown. The team thought they heard a laugh as Barri took hold of the doll, and as they discussed this they saw a shadow moving at the other side of the living room. Ian called out "is this your doll?" And they heard what they thought sounded like a voice saying "yes".
Ian wanted to get a better feel for the energies in the house by walking around alone while Jayne and Barri watched on from their base room. Ian was using the Alice Box app, which spews out random words from a pre-loaded library. The idea is that spirits can affect the random nature of the app and use it to communicate.
They got some interesting responses, which included "was unhappy here". Jayne excitedly said to Barri, "it doesn't say sentences does it?" Barri agreed. Jayne is right that most of the responses through this app are single words, but a quick peek under the bonnet of the app reveals that there are in fact 38 sentences in the app's word list. One of those sentences is "was unhappy here" - for some reasons it's randomly dropped in the middle of words beginning with F. 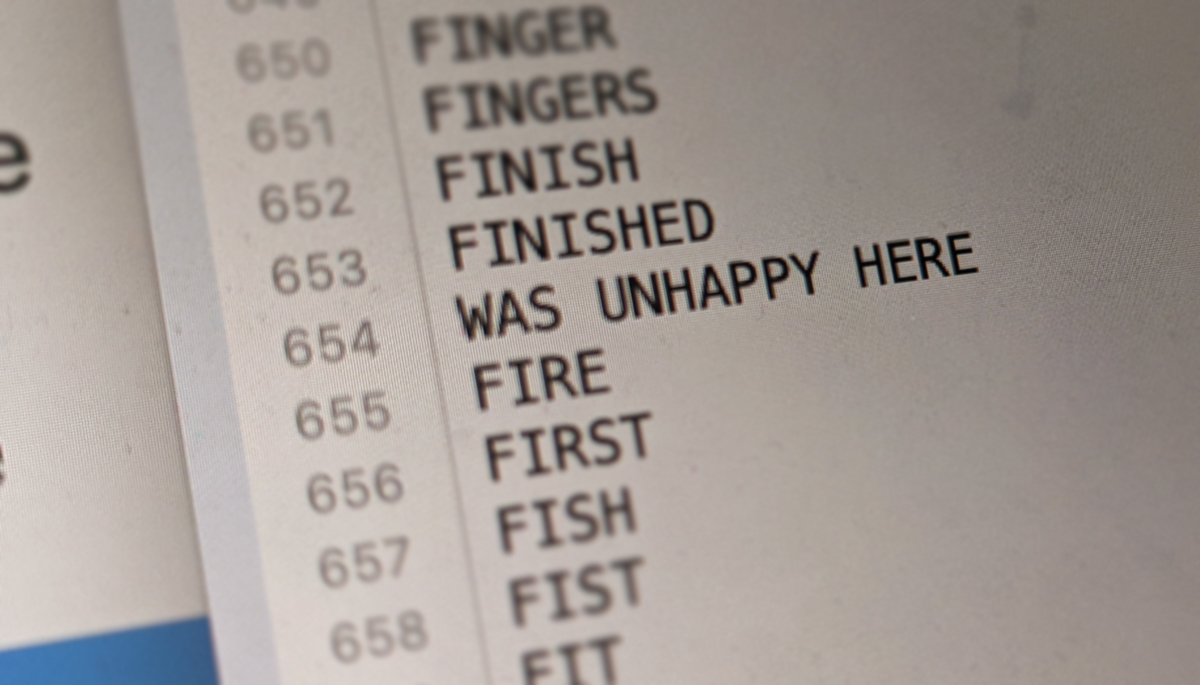 Of course, this doesn't devalue the response, it's just not the case that a multi-word response is impossible through the Alice Box. You can see this for yourself in the image below, taken from a YouTube video by Infraready, an excellent provider of paranormal equipment and seller of the handheld Alice Box tool. The example below show the multi-word phrase "like you here" on its screen. 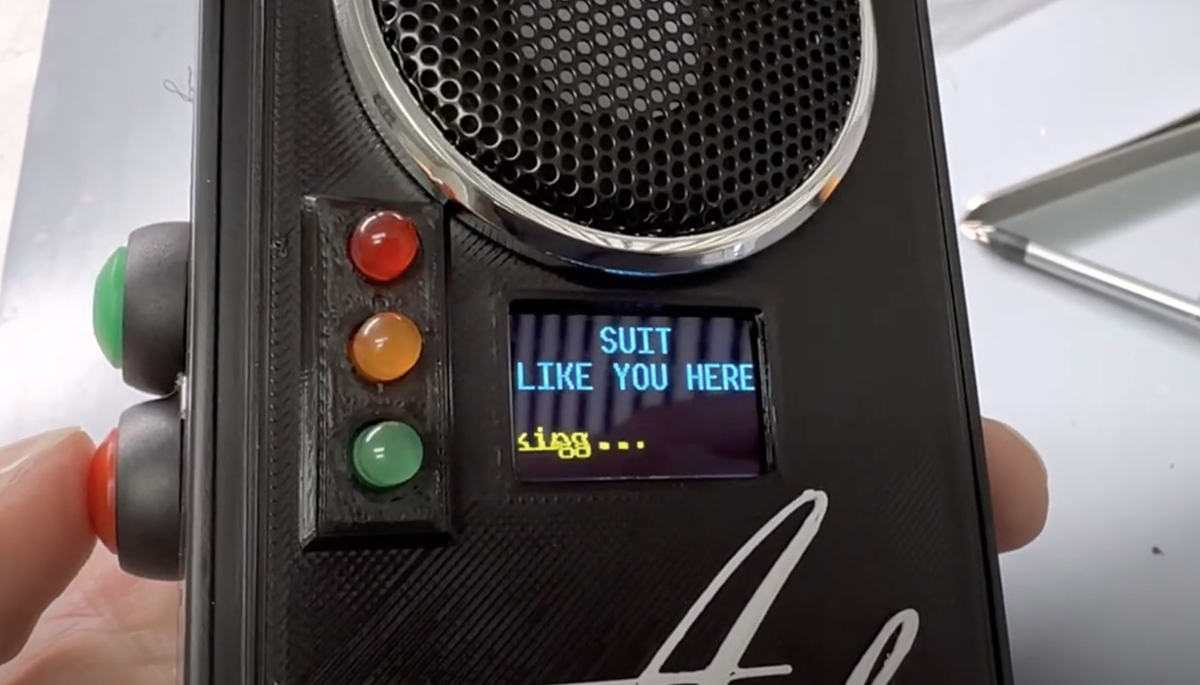 Photo: © Infraready
Barri then joined Ian armed with an SLS Camera, a specially adapted 3D mapping camera is capable of detecting human-like shapes in its field of view and highlighting them on its screen in the form of a stick figure. It appeared to show such a figure in the hallway. Jayne then joined them for a final EVP session, after this the investigation came to an end.

'Help! My House Is Haunted' is known for its strong narratives that run through each case, but this episode felt a little disjointed. There was talk of objects with spirit attachments, most notably the clown doll, but there was also connections made to the nearby shipwreck. Neither felt there was a particularly strong conclusion, especially the spirit connected to the doll that went totally unaddressed.
There was talk of the military personnel who died on the ship and how they were angry that they didn't have headstones, this was sort of forgotten about too. They just ended by praying for the ship's captain at the end of the episode.
There was lots of talk about the spirit attached to the doll wanting its music box back, but this particular doll, which dates back to the 1960s and was made by Mattel, didn't have a music box. It had a voice box, and when its string was pulled would have originally said various phrases, like "Howdy , I'm your old pal Bozo."
The saving grace of the episode however was the interesting responses that came through the various apps and tools the team used throughout the investigation. Many of the responses seemed very fitting and relevant.
You can watch the full fourth season of 'Help! My House Is Haunted' so far right now on Discovery+, with a new episode dropping next Friday.